The School of Dialogue at the Border Protection Corps School Complex

Before it reaches Szabasówka, Korzeniówka flows through Szydłowiec, a small village in the Mazowiecki region. Not so long ago Korzeniówka was quite a big river. The coat of arms of Szydłowiec incorporated in the form of a reversed letter S. Within a distance of 15 minutes on foot from the river the Border Protection Corps School Complex is located. Future IT specialists, policemen, cooks and border protection officials study there at the technical school, high school and vocational school. This spring they have additional classes about Jews living in Szydłowiec and the town history.

During the workshops organised by the School of Dialogue, the students will for the first time hear that the place called Jerycho in Szydłowiec was once the Jewish house of prayer. That the areas surrounding the today’s Maria Konopnicka Square is a former Jewish market. That before the War at the so-called “stoczek” Jewish and Christian women met to do their laundry together. That the stone and brick complex of buildings in Garbarska Street is a former tannery of Nuta Ejsenberg who lived in the house next door.

They will be surprised to discover that before the War Jews constituted 78% of the town’s population. At the third meeting with the Forum educators, students go on a walking tour around Szydłowiec and see their town from a different perspective. They discover a sukkah in Garbarska Street and reach Zamkowa Street, where in 1711 the first synagogue in Szydłowiec was built. They visit the Jewish cemetery and later they will say “Now, when we say Szydłowiec, we can see a former Jewish Szydłowiec. We can see Jewish streets, stalls, synagogues, educational houses, fairs, courtyards full of Jewish people”. At the last workshop organized by the School of Dialogue, students meet Mrs Sława Hanusz, a local activist, organizer of the annual Jewish Culture Day in Szydłowiec. Mrs Hanusz tells students about her research of the family history and her still unpublished book being a collection of stories told by the people from Szydłowiec who remember the World War II. 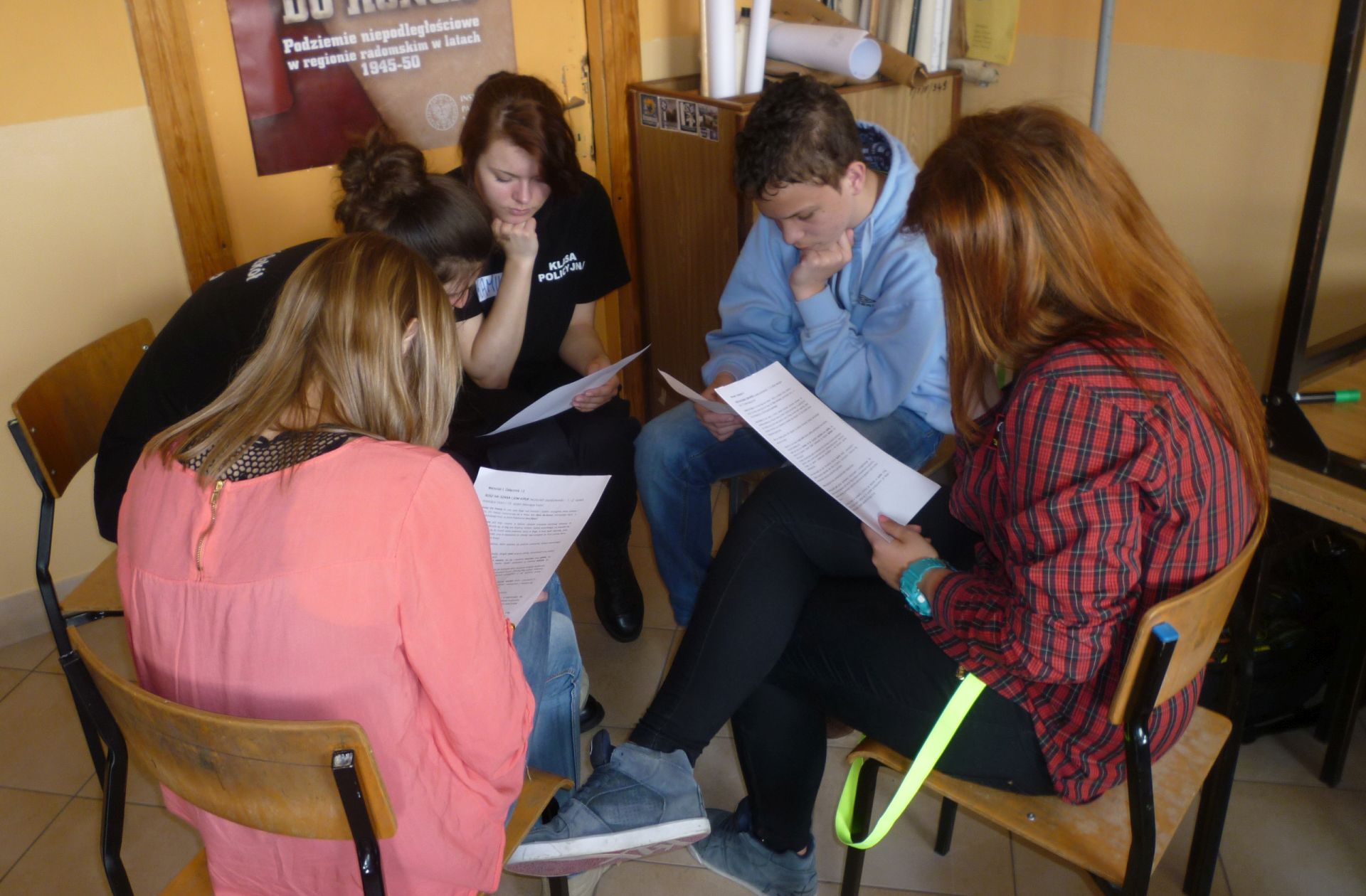 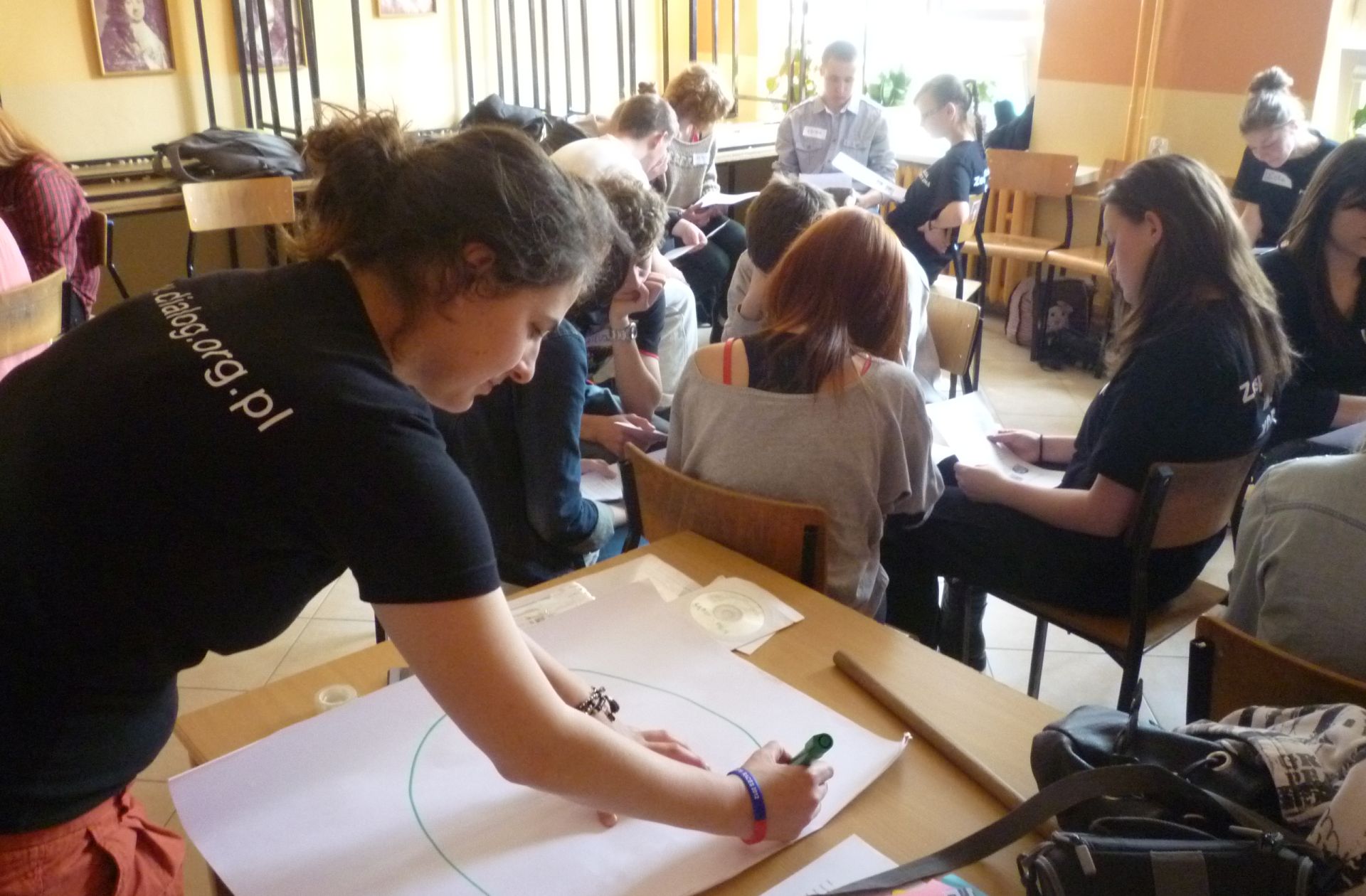 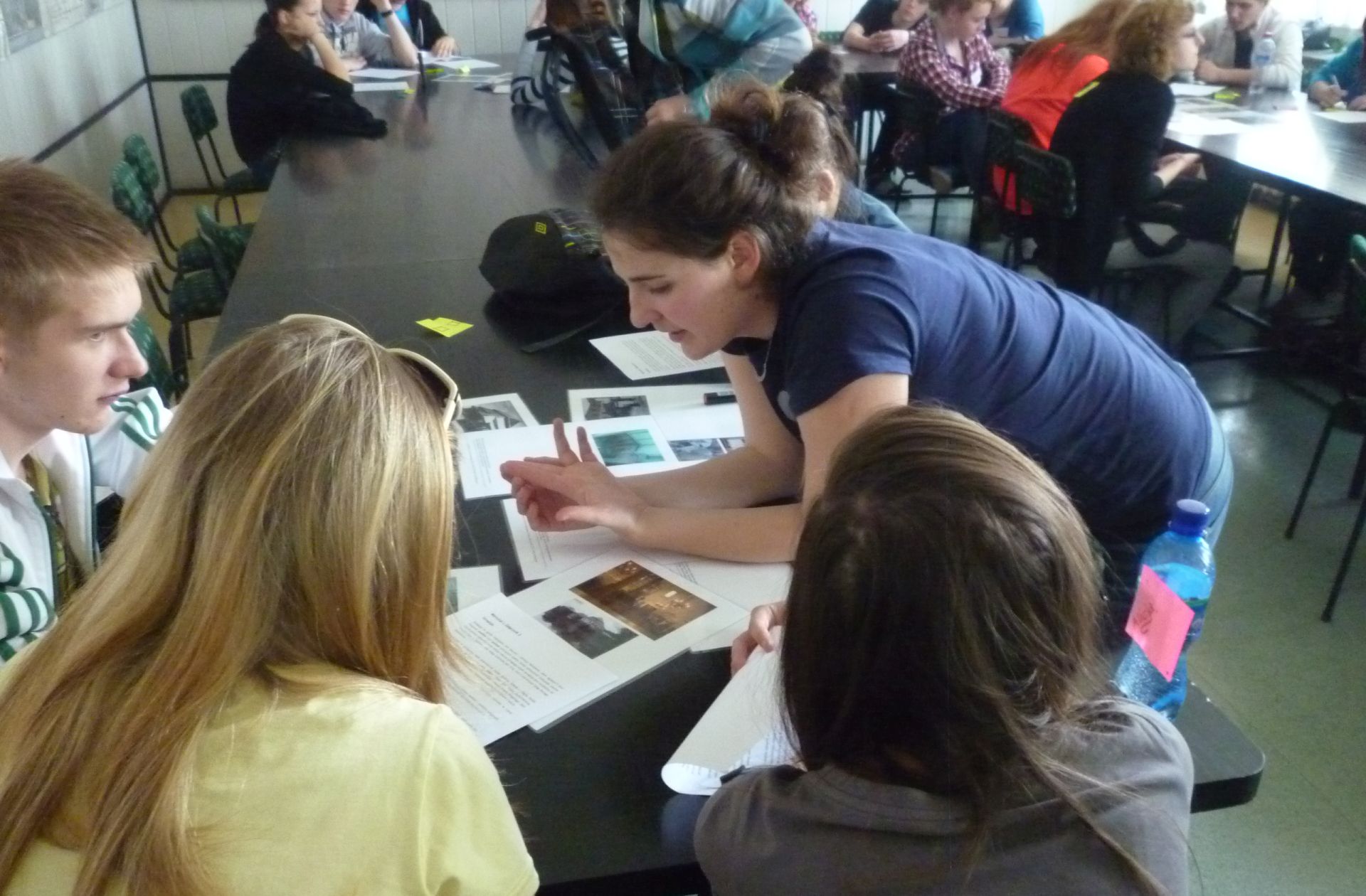 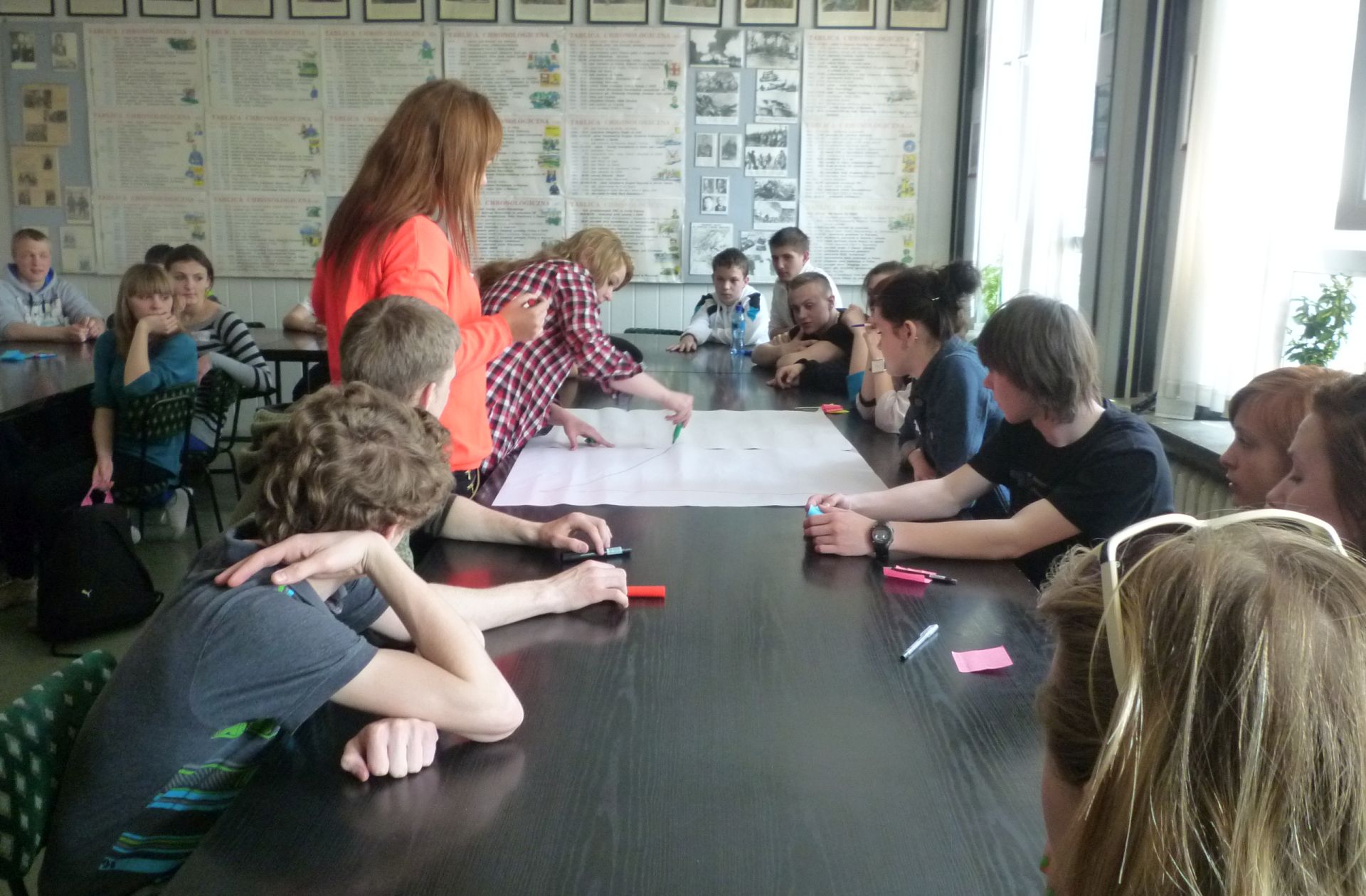 After the meeting, students also ask their families about their memories of the Jewish town residents. As one of the workshop participants puts it: “The workshops made me think and made me talk with my ill greatgrandmother who suffered a lot during the World War II”. It turns out that some students can provide stories of their family members who hid Jews during occupation.

On the last Saturday before the summer holidays, the School of Dialogue workshops’ participants invite students from two classes to the walking tour following the footsteps of the Jews from Szydłowiec. Even though it is a day off from school, the frequency is high. At 10 a.m., each of the tour participants is given a map of Szydłowiec with points marked on it which before the War were important to Jews. Students go to the market square and Radomska Street and tell their friends that Jews once lived in these areas. That the trade flourished on the Jewish market, and not far away a synagogue once stood. That the tannery owners funded the synagogue at Garbarska 3 where the Eight Dreams Foundation is located today.

They will also see the cemetery and will show their friends a plaque commemorating the Jews murdered during the War, and the ohel built a few years ago. At the end of the tour, its participants are invited to taste hamantaschen and watch photographs of prew-war Szydłowiec presented by the high school students, who say: “How one can spend Friday without Jewish women baking challah and preparing chulent? How can a Polish/Jewish town exist without a synagogue and a house of prayer?”

The School of Dialogue will also inspire other students from the school. After the summer holidays, three students groups will continue activities commenced in 2013. Students will prepare a display case in their school, will clean up the Jewish cemetery, will participate in unveiling of a plaque dedicated to the memory of Jews from Szydłowiec, will meet young people from Israel; they will develop the website of the School of Dialogue in Szydłowiec and will participate in a virtual class of the Museum of the History of Polish Jews POLIN.

Participation in the project made me think a lot. I also found out a lot about my town. I realized that all people are brothers and we should respect each other. The stories that were told made me look at past differently. I liked the workshops very much and would like to participate in such workshops once again.

During the workshops, I found out a lot about Jewish life and culture. It was the first time that I started to perceive my town as a Jewish one. Before that, I did not realize how many Jews lived in Szydłowiec and what their life was.

I found out a lot of new and interesting information and I learned that the best work method involves cooperation and understanding of other people. Each workshop taught me something new. I know myself and other people better, and most of all I learned about Jewish culture, tradition and customs.