School of Dialogue at Stanisław Staszic High School No 2

The students’ presentation takes us back in time to the pre-war Tarnovich. In the multimedia animation a sign of a drugstore, car and road signs disappear from the photo of Zamkowa Street. A black and white photo with a Gasthaus sign and horse carriages comes to life. Similar things happen at the Krakowska Street: pedestrians disappear, so do Christmas decorations and colorful logos of the shops. Instead, we see the facades of the buildings in sepia colors on both sides of the street. Aside for that, everything seems the same, you might think. Until you see the animation of the Old Market. Instead of the sale stands a grand building in the Moorish style, with a dome and small towers appears. It’s a synagogue, the house of prayer of Jews who used to live in Tarnowskie Góry since the beginning of the 19th century. This place has been mostly forgotten, just as the Jews who used to be part of the community of the town, even though a nearby memorial recalls: “Nothing other than the House of God and the Heaven’s gates.”

The presentation was made by the students of the Intercultural Dialogue Club in the high school from Tarnowskie Góry in the framework of the School of Dialogue project. Even though the members of the school club had quite an advanced knowledge of the Jewish culture and Judaism and they were sensitive to multiculturalism, at the beginning they knew little about the Jews from Tarnowskie Góry.

Taking part in the program was a chance to fill in the gaps. The educators from the Forum for Dialogue told the students about the lively Jewish community in the 19th century: about the Healthcare Society, the Burial Society Hevra kadishah, the Jewish Sport Society Makabi and the Zionist Organization. About the assimilation to the German culture, emigration to the West in the twenties of the 20th century. And finally about the dramatic events of the war: the burning down of the synagogue in 1939, confiscation of the Jewish property a year later, deportation to the ghettos in Będzin, Częstochowa, Dąbrowa Górnicza, Kraków, Sosnowiec and Zawiercie and finally transport to Auschwitz-Birkenau in 1942.

During the last workshop of the School of Dialogue the students welcomed Mr. Krzysztof Gwoźdź, the author of various publications on the history of Tarnowskie Góry, who provided them with interesting knowledge on the local Jewish community. He said that there was no women’s section in the synagogue and women prayed with men in the main hall, even though it was against tradition. The mikveh served the local community also as a public bath. Lutherans were also buried at the Jewish cemetery.

As a part of preparation of an independently carried out project, the students went to Żarki to see one of the preserved Jewish cemeteries. 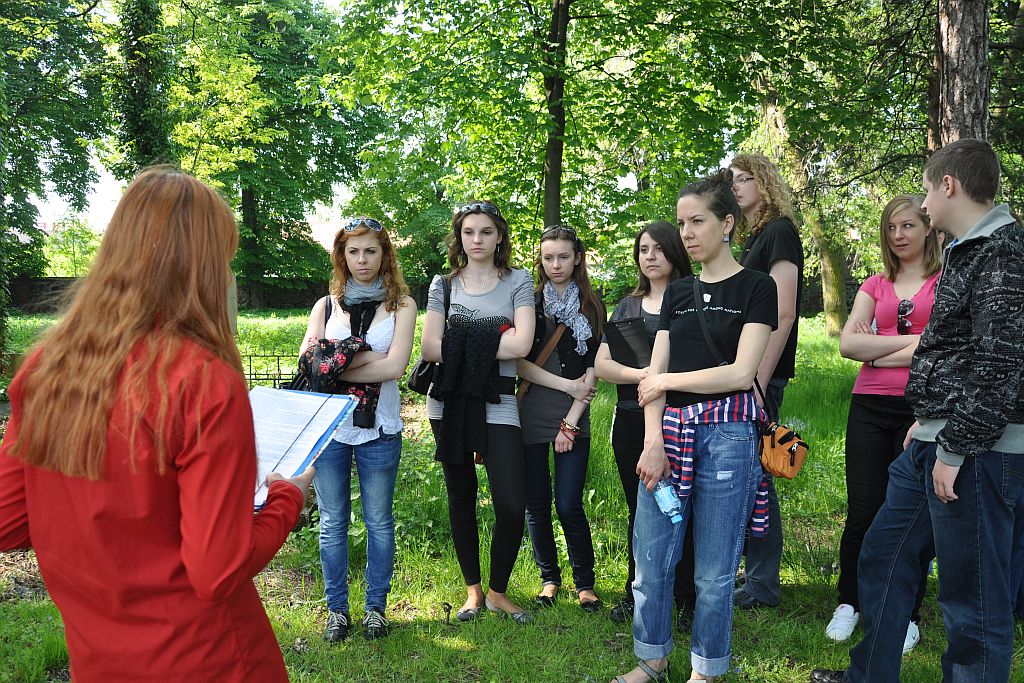 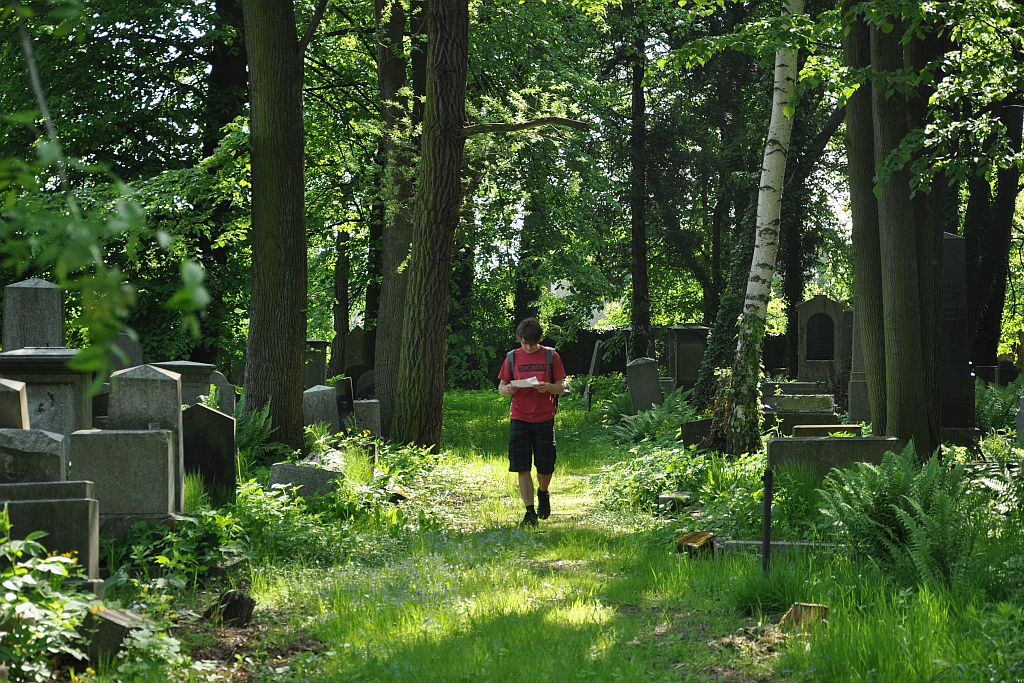 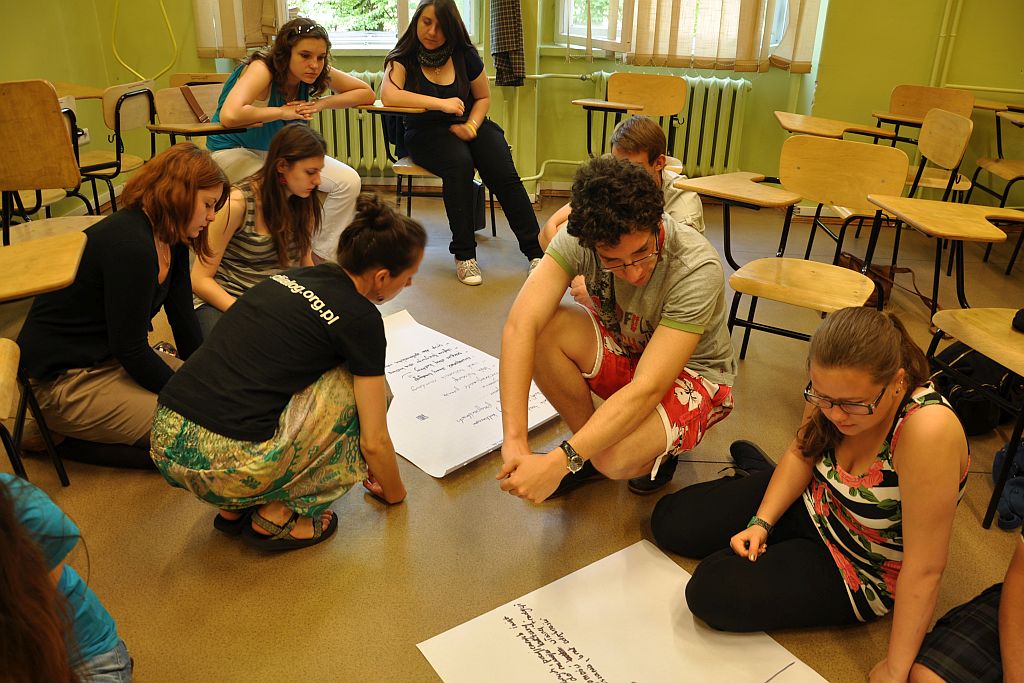 Ms. Katarzyna Kulińska, a representative of the Town Hall and the Commune of Żarki came to tell the students the story of the cemetery.

Before the tour planned for the 2nd June in the footsteps of the Jews of the Tarnowskie Góry, the students printed invitations, baked the hamantaschen, got challahs from a local bakery and invited the media. Finally the big day came. It was stressful and tiring, but also filled the students with lots of satisfaction and pride. At 5:30 p.m. the students invite their guests to visit the local Jewish cemetery, the place which is usually inaccessible to the inhabitants. Kamil recites the traditional “Orphan Kadish: “Glorified and sanctified be God’s great name throughout the world which he has created according to his will. May he establish his kingdom in your lifetime and during your days, and within the life of the entire house of Israel, speedily and soon”. Next to the cemetery gate a red brick building with stained glass still stands. This was the seat of Hevra Kadisha, explain the students. At the market place they can only show the memorial and the synagogue in the photos. Then follows the Zamkowa Street. It used to belong almost entirely to the Panofscy family. On one of the grills on the gate you can still see the A.P. initials – Albert Panofski.

The Krakowska Street also used to be a Jewish street. There was a drugstore “Eskulap” run by Panofski, Adolph’s bookshop, a hardware shop of Schafler, says one of the students. Kamil tells the surprised audience about the Ladies Union and the Men Committee. Finally, the group reaches the school playground. This is not the end, but the continuation of program.

There is a Haman’s ears sale, a screening of a film about the pre-war Tarnowskie Góry, presentation of animation of former Jewish buildings, a lesson of the Yiddish and Hebrew languages and Jewish dances. The students shared the following reflection from the whole event: “By working on this project, we were able not only to understand but also to feel, that the world is not homogeneous and that it does not speak one language. Various voices can be heard around us and it is up to us to let them become a part of our existence. Silesia was and still is a region which is tolerant to others, the foreigners the neighbors. Unfortunately, history disrupted this state of symbiosis between nations, destroying the understanding which was developed through centuries. All we have left after the Jews from Silesia are 60 cemeteries, tenant houses and a few synagogues. That is why it is worth to cherish what we have. Foremost the memory”.

We found interesting information about our town, to which the inhabitants have not had access for a long time. The places which we pass everyday have a very different meaning to us, as now we know their history.

Thanks to the workshops we have developed our knowledge. We feel that we have become more tolerant to other cultures and we see our town as multicultural. We know we can now go to people and tell them about the positive influence of Jews on Tarnowskie Góry.

School of Dialogue program in Tarnowskie Góry was made possible by the support from LINDA and JEROME SPITZER.