School of Dialogue at Stefan Żeromski High School No 2

To this day, the former mikveh building stands in Tomaszów Mazowiecki and so do most of the headstones at the town’s Jewish cemetery. Some buildings relevant to everyday Jewish life also survived World War II: the former kosher slaughterhouse, the school building and a few mansions of Jewish manufacture owners. A local foundation called Pasaże Pamięci (Arcades of Memory) collects and publishes information about Jewish Tomaszów in an attempt to promote the town’s Jewish past. Even before establishing the foundation, its future members did their best to care for the Jewish cemetery.

School of Dialogue workshops led by Forum for Dialogue educators allowed local high school students to deepen their knowledge of Tomaszów and its surrounding area. Over the course of a few spring days, they discovered this previously unknown to them history and learned how it manifests itself in the town’s present-day topography.

Situated in Łódź voivodeship and numbering 65,000 inhabitants, Tomaszów Mazowiecki was founded in the 18th century by Antoni Ostrowski, who most likely named the town in honor of his father Tomasz.

First Jews settled in Tomaszów at the turn of 18th and 19th centuries. The first to arrive were entrepreneurs: Jankiel Steinman, who owned a cotton-production plant and Jakub Kempner who  leased the town’s smithies. Among newcomer Jews were factory-owners as well as common workers and merchants, but also lawyers and doctors.

The Kehilla was established along with the Jewish cemetery in 1831 and the synagogue, mikveh, school and Jewish hospital were all erected around that time. By early 20th century, local Bund, Poalei Zion and Aguda party branches existed in Tomaszów, as well as a Talmud Torah school, a Polish-Hebrew high school, cheders, three “Shabbat schools”, Jewish libraries and amateur theaters.

Jews of Tomaszów also had their burial society (Chevra Kadisha), Healthcare Association and trade unions. In 1921, Jews comprised 36% of Tomaszów’s population; 10 years later, it was almost 39%. On the eve of World War II, 26% of the local residents were Jewish.

The German army occupied the town from September 1939, burning down all the synagogues soon afterwards: the Great Synagogue was razed on October 16 and the other two on November 7 and 14, respectively. Torah scrolls from the Great Synagogue were carried out of the building just before the fire and hidden in the ground, to be uncovered immediately after the war.

The ghetto that became home to Jews from Tomaszów, Warszawa, Łódź and Płock, was established in December 1940; in December of the following year, its area was reduced and it was sealed off from the town. Some of the Jews were deported to a labor camp in Bliżyn, and in late 1942 the liquidation of Tomaszów ghetto began: around 15,000 Jews were deported to Treblinka, while the remaining 900 were placed in the forced labor camp. Last Jewish residents were taken to Starachowice in May and September of 1943. Around 200 Tomaszów Jews survived the Holocaust.

As part of their project, students organized a series of events that aimed to familiarize local residents with Tomaszów’s Jewish history. As part of their Jewish Culture Festival they came up with the idea of a Jewish Song Festival at Barlickiego Street. Katarzyna and Stanisław Fila, owners of a tenement house and courtyard at Barlickiego, joined in preparation works; the Municipal Culture Center lent the audio equipment and provided a sound technician. Students also identified sponsors for prizes awarded to festival participants and for refreshments. Guests were treated to challah, cholent, hummus, Ashkenazi haroset and a fish dish. There was song and there was a festival audience, all as planned. 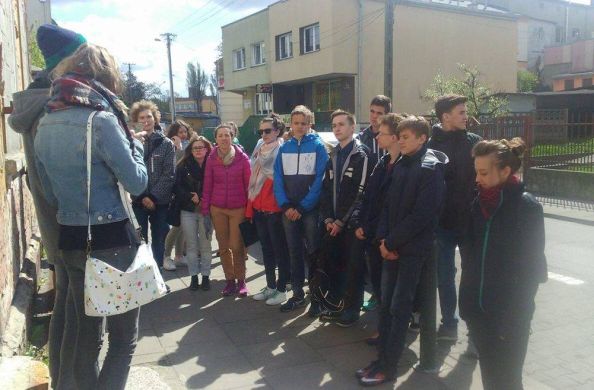 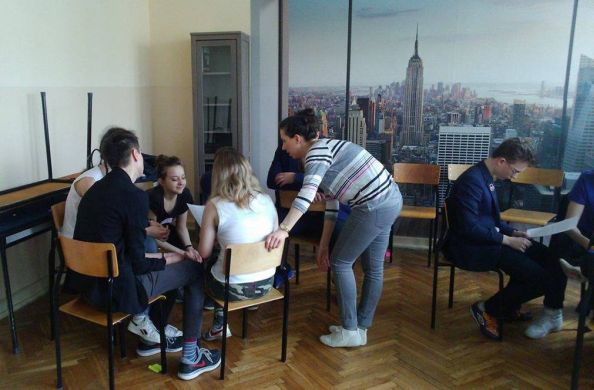 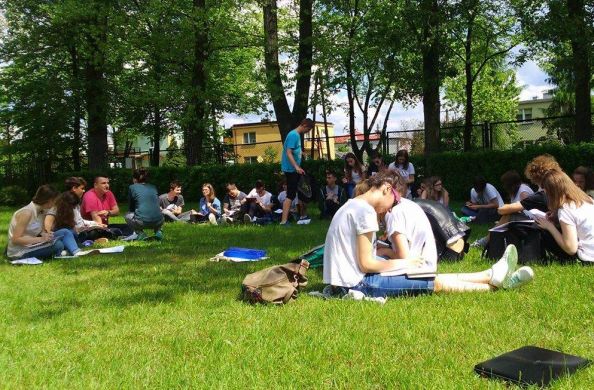 Students also designed workshops on matzevah symbolism for other high school students, organized a clean-up event at the Jewish cemetery on Smutna Street and convinced secondary schools to participate in Jewish culinary workshops.

A few days later, on June 14, 2016, students of the local junior high school were invited on a walking tour. Invitations were shared through social media and local press as well as Fama radio station. Before the tour, students met with Justyna Biernat, president of Pasaże Pamięci Foundation and with Michał Rzeźnik, who told them about significance of cemeteries to the Jews, symbols seen on Jewish tombstones, Hebrew language and his own experience with Jewish culture. To learn more, for their own use as well as for others, students translated a chapter from Allan Chernoff’s book Tailors of Tomaszów.

At the very beginning of the tour, students told their guests who they are and why they organized the event. They provided an overview of Tomaszów Mazowiecki’s history and that of local Jewish community and then led the group down Tkacka Street, where the old mikveh building stands, falling into disrepair. There, they explained what a mikveh is and about ablutions and Yom Kippur holiday; that right next to the building used to be a Great Pond whose water were used for mikveh purposes; and who were the Landsbergs and what stands on the site of their former factory.

On Kościuszko Square, tour guides talked about the different market squares – as there was more than one in the town. Not many of them still exist, but Tuesday and Friday are still market days, just like before the war. In the vicinity once stood a big Russian Orthodox church, with the synagogue not much farther away. Students sought out street names and marked those that once were inhabited by Jewish residents.

Walking down Piłsudskiego Street (once known as Kaliska), students reached the Hebrew secondary school, which was introduced to tour participants by Michał Rzeźnik. On this stop junior high school students were introduced to the Jewish education system and the names of different schools, learning about differences between a cheder and a yeshiva.

On through the Jewish neighborhood, down Krzyżowa Street and through Tuwimów park, the group reached the site where up until 1940 stood the synagogue. What is Talmud, mezuzah and bar mitzvah? These foreign-sounding words hovered in the air. Next, walking down Polna Sreet, the group reached the site of Talmud Tora school building that existed until three years ago. Nearby were tailors shops ran by Jews of Tomaszów. Here, students told their guests what World War II entailed for the local Jewish community; how it impacted the contemporary Jewish identity and what contemporary Jewish life and modern-day Israel are like today.

The tour ended by dr Rode’s palace commonly known as the White House, which now houses the Registrar’s Office. Jan Rode was introduced to tour participants, who learned why there is even a monument to him in Tomaszów Mazowiecki.

As a final element of the tour, each participant received a small souvenir. After the thank yous and goodbyes, the group parted ways, yet for School of Dialogue students this was not the end. They still have some plans for more activities up their sleeve. To quote one of the tour participants Aleksandra: “I’ve lived in Tomaszów all my life, I often walk these streets and pass these buildings, but I never imagined their history can be so fascinating. The tour made me realize how important Jews were for the community of Tomaszów.”

Each of us benefited from these workshops. One should get acquainted with different cultures, especially if these other cultures are also part of our own.

Initially I thought that all Jews are Orthodox, now I know this is not true.

We learned about Jewish history and holidays as well as modern Jewish life. We realized that our city is filled with traces of Jewish heritage, which actually was the most interesting for me personally.