“We want to welcome you on the walking tour around the forgotten Jewish Ulanów which to a great extent will be virtual as many places we want to visit, do not exist today or their designation has changed over the time. We want to present you a story of the Jewish community connected to the town from the very beginning of its existence. The life of Jews who once lived in Ulanów was marked by the cruelty of the war. In 1942, some were murdered,others were transported to the camps. Some managed to survive the occupation, but they never returned to Ulanów. What remains are old town houses at the market square, the cemetery and recollections of the eldest who remember the pre-war life of town residents.We do invite you to listen to our stories, in order to restore memory of people and places that have already been slightly forgotten.” These are the first words of a guide prepared by the students from Ulanów, available on the school website, and which may be used when touring Jewish Ulanów. It was the second time that the School of Dialogue program was organized in Ulanów; therefore this time the workshop participants were given the task to use the knowledge and materials gathered by their older peers and create a walking tour guide around the places connected to Jews from Ulanów.

They mostly dealt with trade and craftsmanship. The town housed a synagogue, a mikvah, a stall – slaughterhouse, a cemetery and several educational institutions. Local Jews had enjoyed an active social, cultural and political life. Numerous representatives of the Jewish community were members of the Town Council. During the period from 1940 to 1942, the majority of Jews were transported and murdered in Treblinka. A school was built in the place of the synagogue burnt by the Nazis, and the fire station is housed today at the former mikvah building. The Jewish cemetery with almost two hundred matzevot is also preserved.

Students decided to create an audio version of the tour around Jewish Ulanów. They thought of its route that was to start at the market square. They wanted to depict the atmosphere of a vivid pre-war town; therefore, they included Jewish bakeries, a textile shop, a butchery, a hair salon (on the wall over the entrance an inscription still reads: FRYZJER (HAIR SALON)) in their tour guide. They also guided in front of the house with a trace after a mezuzah: “Hoffman, a wood trader, lived in this house. (His daughter is still alive.) It is one of the few Jewish houses, but the most interesting one, as if you get a closer look, you will see a trace after a mezuzah on the door frame. A mezuzah is a small box made of wood, metal or glass. It contains a piece of parchment inscribed with two verses from the Torah” – says the tour guide. 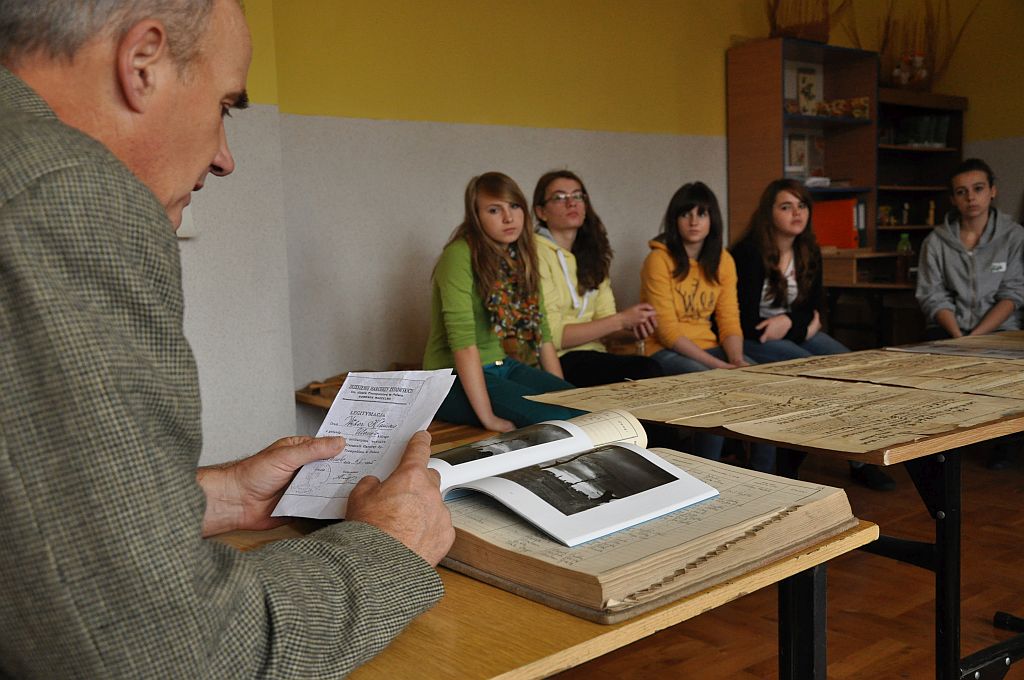 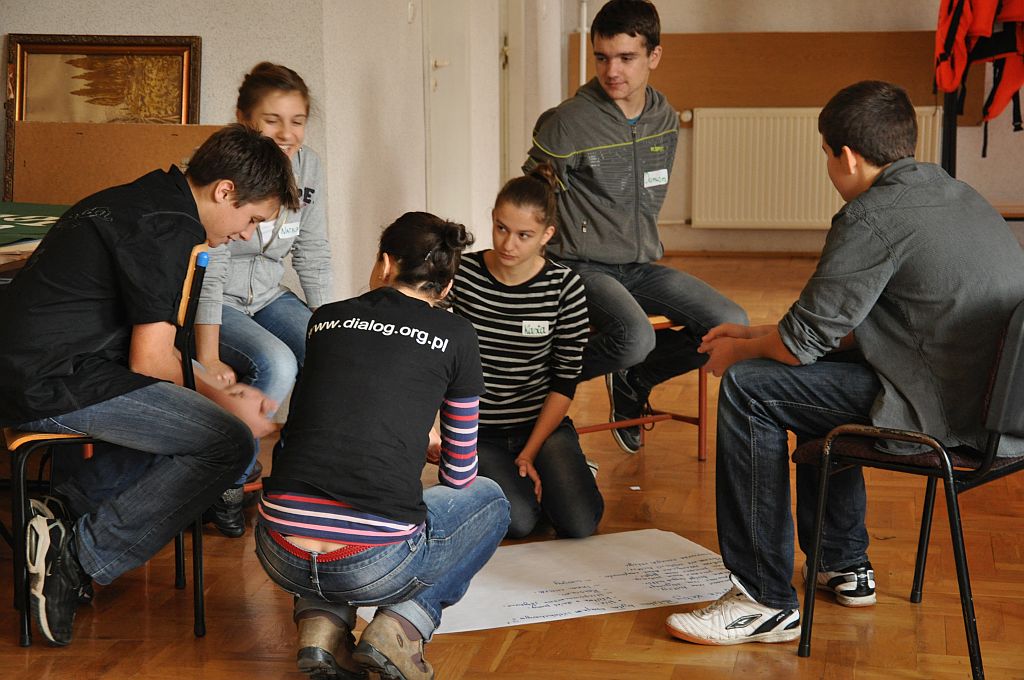 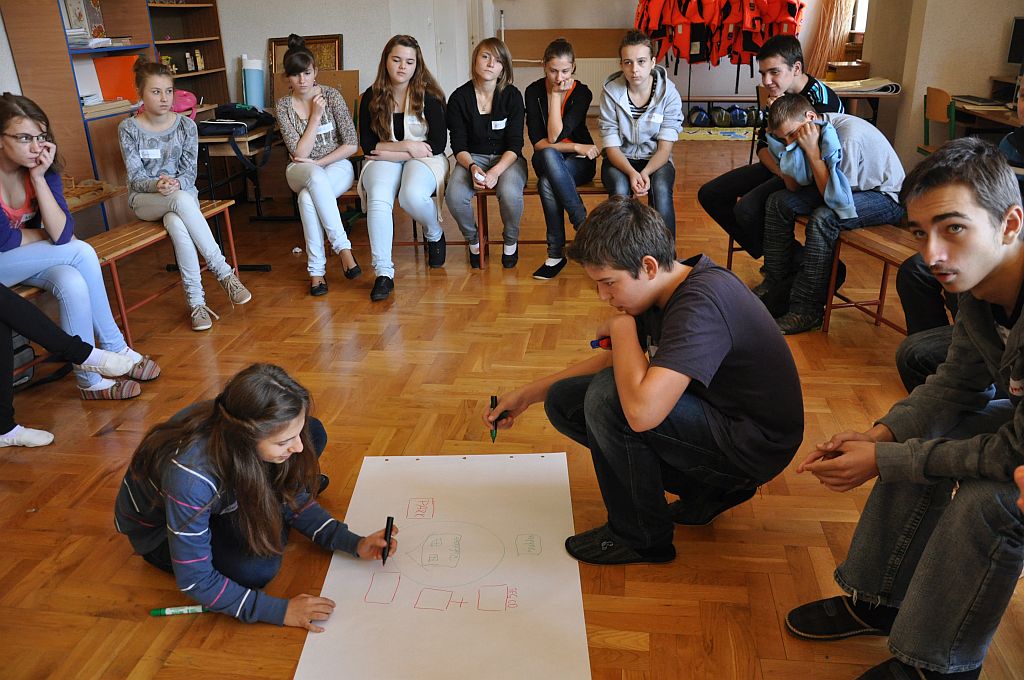 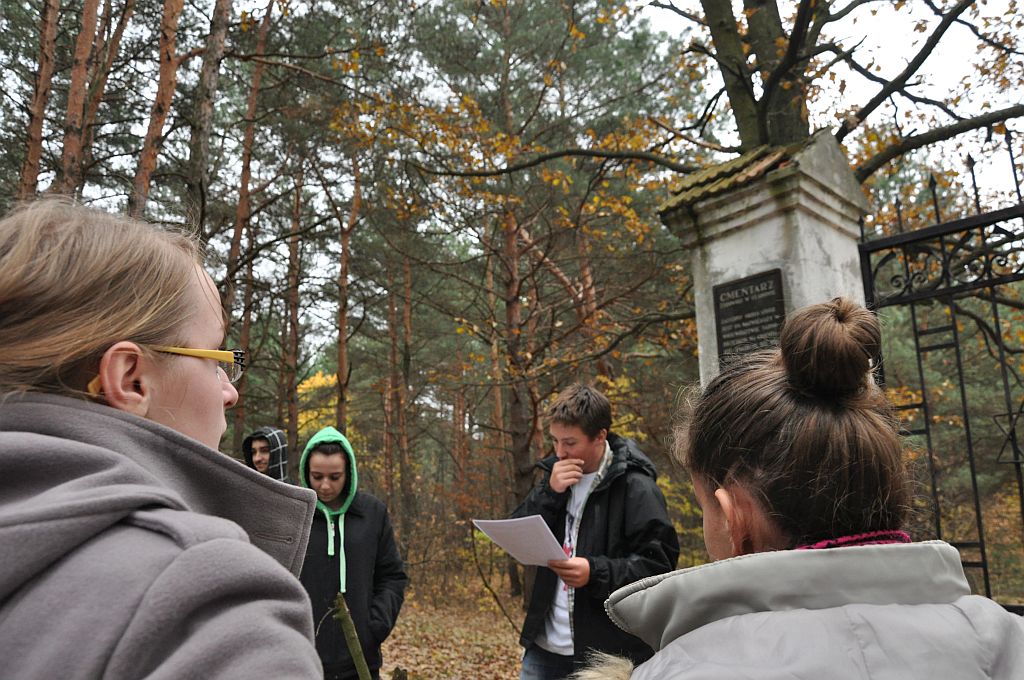 Then, the tour leads to the synagogue, mikvah and the building which once housed a school (the pre-war records of students are still preserved). The tour ends at the Jewish cemetery in Ulanów.

The route of the guide and stories about particular places were validated in real life during a walking tour that students organized on November 22. They invited two group of students, one from a junior high and another from a high school, the schools’ principles, the mayor and Janusz Dąbek, a local historian and a collector of mementos who with his knowledge assisted them with collecting the information. “Together with my friend we went to meet with Mr Dąbek who runs the museum. We were impressed by his knowledge about this culture. I would like to know at least half of what he knows” – students describe working with him. Irena Serafin, a school pedagogue, also participated in the project and provided students with substantial and technical background. A journalist of “Echo Dnia“, a local daily, also came to the tour. Younger tour participants received mini-dictionaries that in a nutshell presented basic terms concerning Jewish culture and symbols put on Jewish headstones.

It is worth noticing that the authors of the audioguide cared to present some interesting facts in-between stops of the walking tour.

Therefore, when following the route, tour participants can hear about Jewish wedding or funeral customs.Students also took care of the practical side of the guide: each stop is provided with instructions on how and where to stand in order to easily see the place that is being described. The information about the route is delivered in a clear manner; the tour guides speak with a clear and calm voice, and we can hear classical and traditional Jewish music in the background.

Young authors invite to discover their work: “When working on this project, we created an audio guide and a walking tour around old Ulanów. It allows us to imagine the life of our ancestors, not only Jews. Only few of us realize that our town has such a rich history. If you are a descendant of someone from Ulanów or if you are just interested in this topic, I do kindly invite you to our town.” They add that participation in the project caused a change in themselves.

The authors also thought about those who do not possess devices to play sound files and simultaneously created a guide of the walking tour in a text version, enriched with pre-war photographs. The two versions of the tour guide are available on the school’s website. For its project “A Tale About Those Absent – A Walk Around Jewish Ulanów”, the junior high was awarded a distinction at the 2012 School of Dialogue Gala.

These workshops showed me that nothing is as it seems. To truly realize how much something is worth you need a lot of time. The time we had, though it was not so long, changed my point of view on Jewish culture. I saw a new perspective far removed from the one I had before the workshops.

Because of the project I did realize that not everything is as we think it seems to be. The places we pass by every day now appear different. Each of these places has its own history related to the Jewish residents.