It’s hard to talk about something which does not exist any longer. To tell about something you cannot see, hear or touch. How to show a synagogue without any surviving trace of it? How to present a cemetery, which is now a football pitch? “It’s hard to talk in  interesting way about a synagogue which is not there, so our students decided from the beginning that a standard walk would not be enough, that they had to prepare something different. Otherwise it would just be boring” – talks about the students involved in the project their teacher, Mariusz Sokołowski.

Wasilków, where the students go to school, is a small town by the Supraśl river, not far from Białystok. Jews started to settle there after the thirty-year war, in 1648. Main Jewish settlements were located around the market square and in Mostowastreet, today called Białostocka. There were three cemeteries and three synagogues in the town, apart from the oldest synagogue, where since the end of the 18th century Chvra Kadisha society operated. When a station on the Petersburg railroad opened here, many textile factories followed. Of the 12 largest factories 10 had Jewish owners. At the end of the 19th century two Jewish schools opened.

Between the two world wars there was a Jewish theatre, an orchestra and Jewish organization Bund, which founded a school with the Yiddish language. On 16 September 1939 Wasilków was attacked by Germans – a week later Red Army entered town. In 1941 Germans set up a ghetto here for around 1250 Jews from Wasilków, Łomża and Choroszcz. At first Jews had to work building the roads, then they were transported to the death camp in Treblinka. Some Jews probably survived by escaping to the Soviet Union or hiding with the Polish peasants.

During the workshops the students observed the emptiness after the disappearance of Wasilków Jews, who made up a major part of its population. During their project the students tried to recreate the pre-war atmosphere of this Jewish town. “We tried to learn as much as we could about the Jewish culture and to imagine our town 70 years ago. Unfortunately a trip in the past only follows the trails of imagination and always ends in sadness. We took the challenge, however. Our main goal was to show the “colourful” Jewish culture and to try to reconstruct, as far as possible, the atmosphere of a pre-war Polish-Jewish town” – say the project participants. 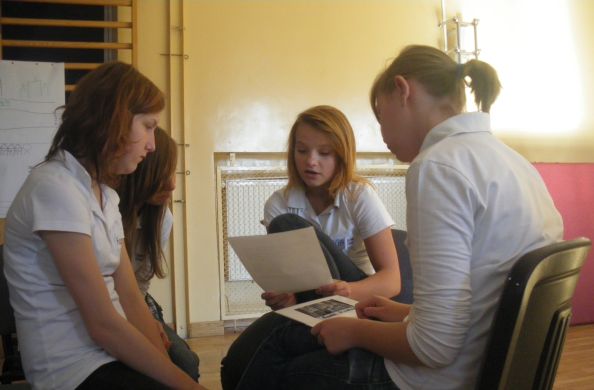 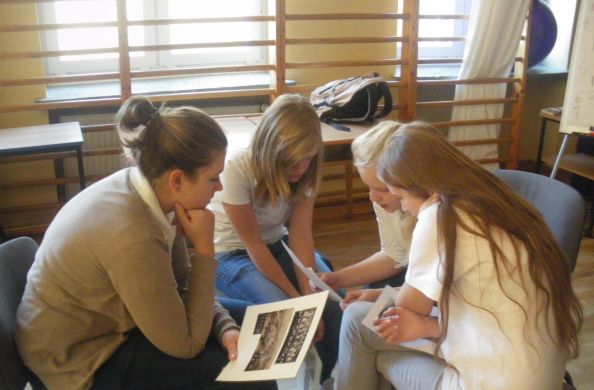 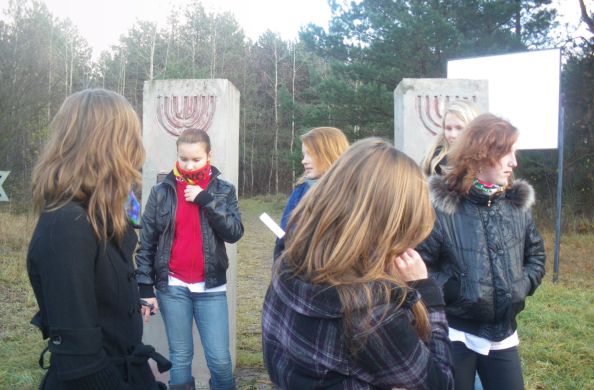 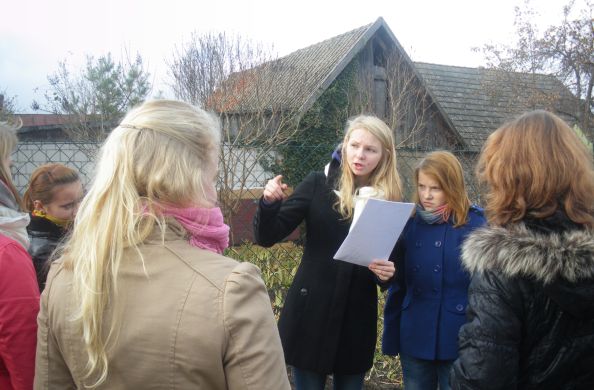 An extraordinary trip resulted, enriched with colourful scenes, competitions and attractions involving the walk participants. At the place of the former synagogue the walkers could listen to a rabbi’s story. At the place of the former mikvah in Łazienna street, there was a short course in Yiddish alphabet, when they with their bodies spelled the word “mikvah”, in Kupiecka street they could hawker with Jewish peddlers about purchasing tchotchkes(trinkets). At an improvised Jewish canteen there were stories of kosher cuisine and bagels with traditional Jewish quotes. The walk organizers even confronted the local myth saying that the great fire in the 19th century was started by a Jewess and her iron. Starting from this story the walk participants and the students talked about stereotypes about Jews and other nations. All prejudices and superstitions were written down on small pieces of paper and symbolically burned in an iron bowl.

There were also tragic, inevitable stops en route, like in the former ghetto. A fragment from memoirs of a person from Wasilków from the time of the ghetto liquidation and transporting Jews to the Treblinka death camp was read there.

The last stop on the journey through the Wasilków past was the Jewish cemetery, where the “Elegy for Jewish Towns” by Antoni Słonimski, a Polish-Jewish poet was read, and symbolic pebbles placed.

During preparation for their walk, the students used the knowledge of the coaches from the Dialogue Forum and their teachers, as well as information from the Internet, books from school and town libraries, but first of all from recollections of an elderly Wasilków inhabitant, Jan Kruszewski. Tehy took him for a walk around the town. The entire trip resulted from an idea to combat stereotypes present in minds of people in Wasilków. “Thanks to this project I learnt how life in my town looked life before the war. I wish more people remembered those times. Not many places of Jewish life survived. In our country people usually have no idea what  the Jewish heritage is. I would like to change it.”– one of the participants said. A walk following Jewish footsteps in Wasilków was an important step towards that change.

I think that because of the workshops my attitude towards people of a different culture changes. My knowledge expanded, which led me to many thoughts. I enjoy the thought that in a few days we start preparing to guide the town inhabitants following the Jewish footsteps.

The project helped me broaden my knowledge about my city, I looked at it from a different angle. I will not forget what I learnt and in the future will tell about the past of Wasilków to my grandchildren.

Before I did not know much about Jews, but after the workshop I can totally call myself an expert.

I learnt how Wasilków operated before the war, where the synagogue, cemeteries and the mikvah were. My attitude towards Jews has changed; the workshops familiarized me with what seemed to be remote

After the trip “In the footsteps of Jews” my view of the town changed. I know now how much Jews put into Wasilków, and how little remains. I enjoy the fact that I will be able to show to my elders how much I know about Wasilków.

School of  Dialogue program in Wasilków was made possible by the support from SHEILA and DAVID FUENTE.