School of Dialogue at Adam Mickiewicz High School No 1

In Węgrów, one of the oldest town in the Mazowieckie Province, Jews began to settle at the turn of the 16th and 17th century. Before the War, they constituted half of the town’s population. They lived mainly in Kozia and Żydowska Streets. There functioned Jewish schools, political parties, sports clubs, social organizations, prayer houses, a mikvah and a Jewish cemetery. At the former Joselewicza Street, there was the Great Synagogue. Its rabbi was Yakov Mendel Morgenstern, who was murdered by the Nazis in 1939, at the town market square in Węgrów. During the war, the synagogue and other buildings owned by the Jewish Community were destroyed. In 1940, a ghetto was established, and during the years 1942-1943 Jews that were settled there, were transported to the death camp in Treblinka.

Today, only a Jewish cemetery with a lapidarium built in 1981 reminds of the Jewish community.

At the beginning of the School of Dialogue workshops, students from Węgrów knew that the Great Synagogue once stood where now the police station building is located. They knew where the house of the last rabbi of Węgrów was and the pre-war Jewish factories and shops. They had general knowledge about Jewish culture and were familiar with basic terms. But when during the walk with Forum educators they discovered a visible trace of a mezuzah on the doors to the yard of the rabbi’s house, the workshops’ topic really spoke to them. The history became tangible, and making further discoveries truly exciting. After the workshops at school, students talked with grandparents at home about the pre-war history. They searched for articles, maps, photographs. They tried to accurately determine the ghetto borders. Paweł Wyszogrodzki, their teacher, showed them archival photographs from his own collection. 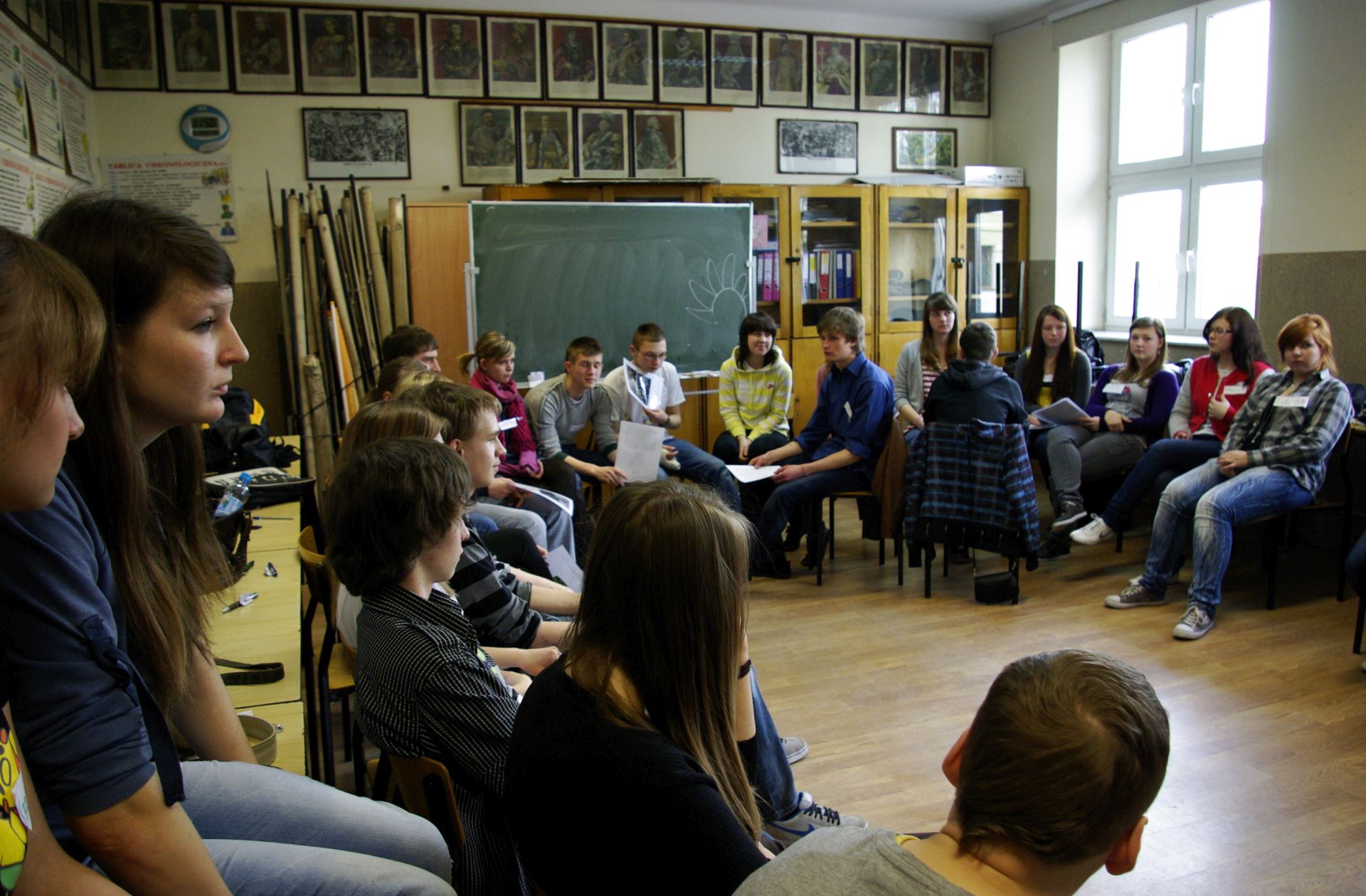 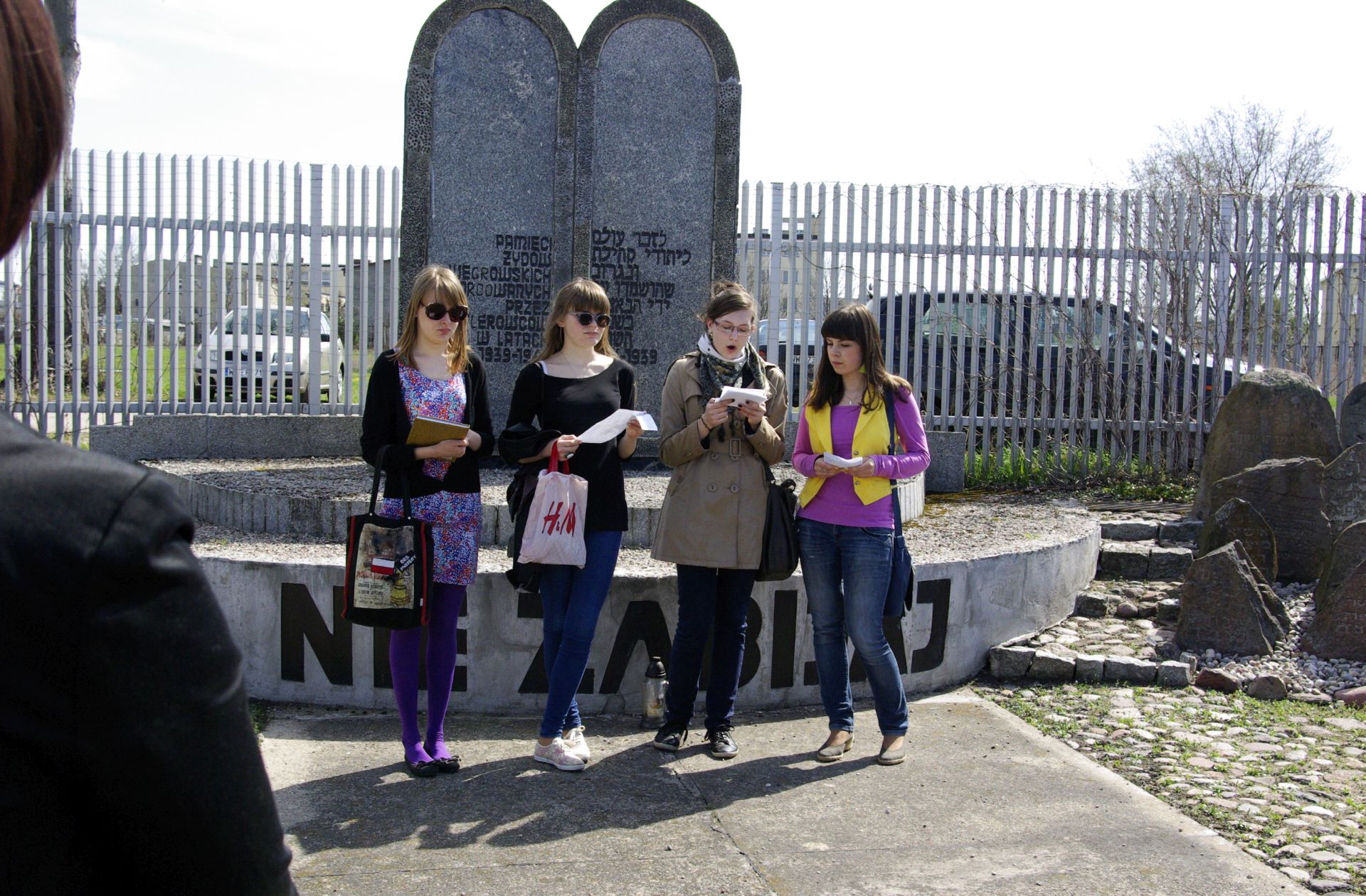 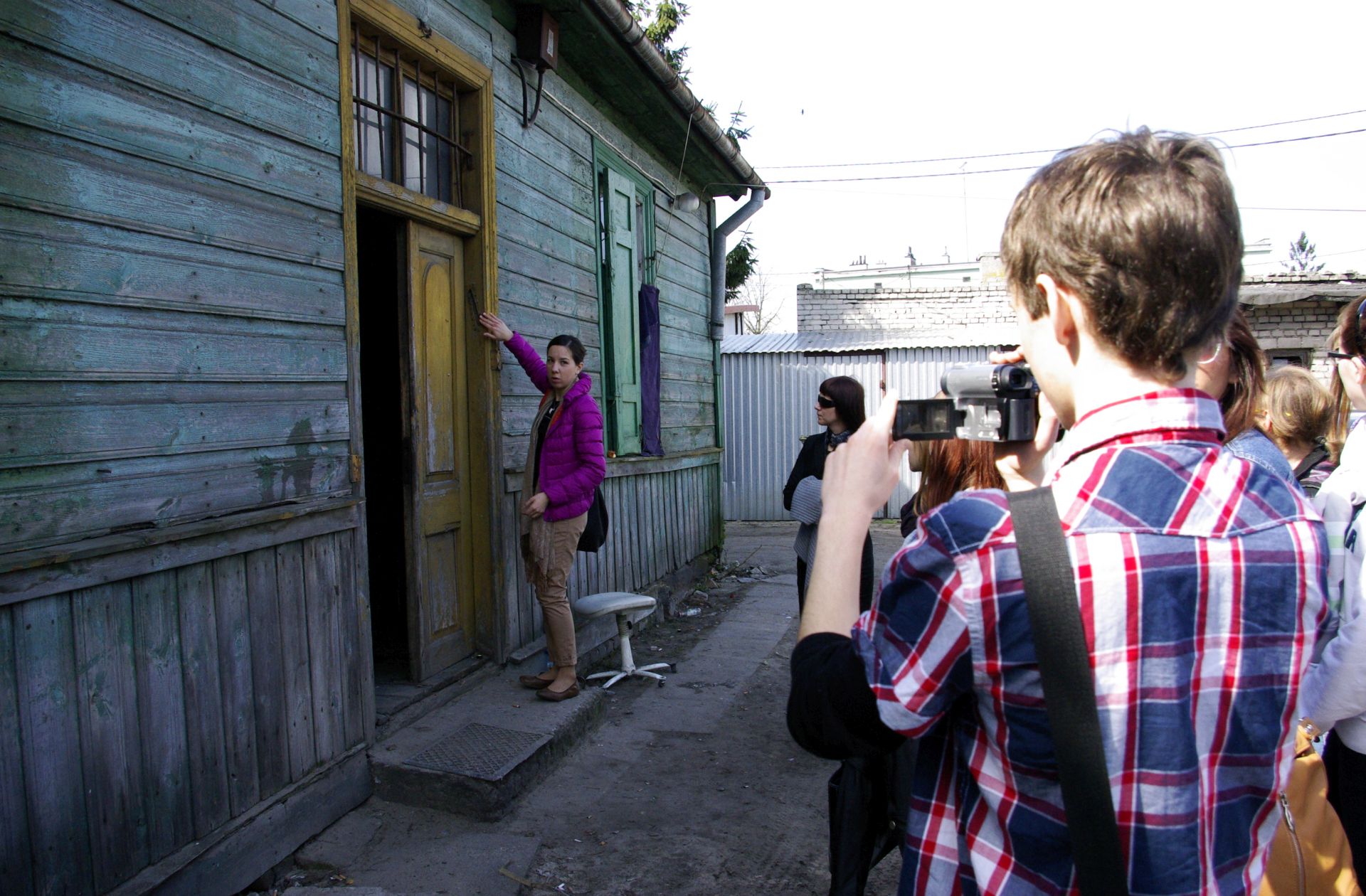 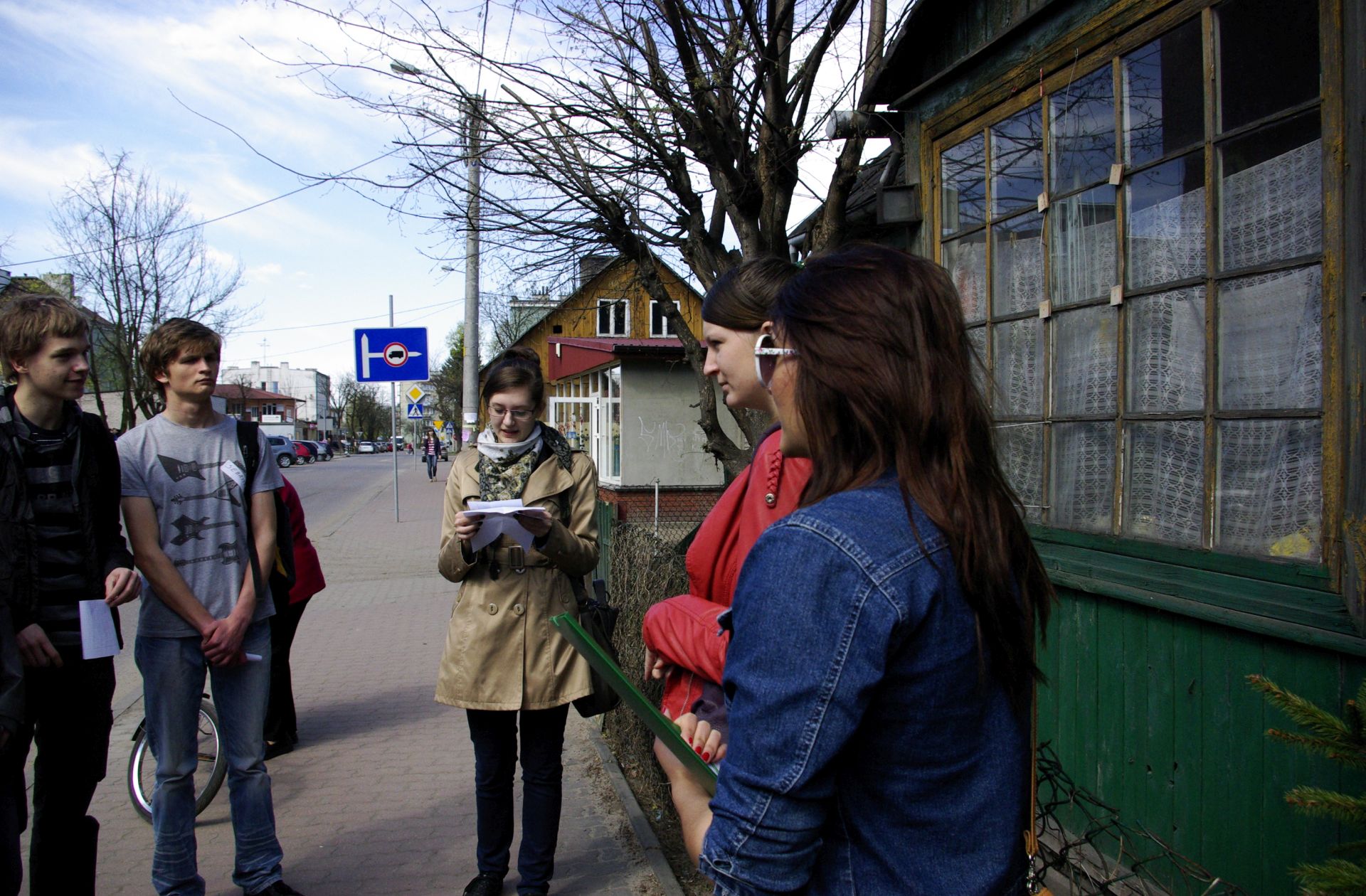 To the final walking tour they invited representatives of local authorities and fellow students from the same year. On June 21, a week before the summer holidays, they went on a walking tour following the footsteps of Jews from Węgrów. The weather was wonderful. The route led through the former ghetto area, the synagogue yard, the monument of Angel Rosenblat, a philologist and expert in Spanish from Węgrów, the lapidarium commemorating Jews from Węgrów and the house of the last rabbi. Invited guests listened attentively, and even joined the narration, adding their knowledge to the statements made by the students. At the end, the organizers invited all the participants to the Cultural Center in Węgrów where a Jewish dance was performed and an exhibition of pre-war photographs was held.

The high school students prepared a quiz for participants to test what they had learned during the walking tour.

They documented their endeavors in a film, which included photos from the workshops, fragments recorded during the walking tour and the dance show, and short interviews with the tour participants. One of the workshops participants wrote: “We have a lot of photos and films left from this endeavor that we keep as souvenirs. Yet the awakened curiosity stayed with us. Who knows maybe in the future some of us will follow Jewish studies, tourism, history…? Maybe someone will bind his work and life with the adventure commenced at school. For me, the project was a wonderful experience.”

I feel sorry that after the war only a few places connected to Jewish community have been preserved in my town. And I am happy that these workshops provided me with that knowledge. It is very important to know more about the life in my town during the war.

I found out a lot about Jewish culture and everyday life of Jews who lived not only in my town but all around the world … It proves to be a very interesting and useful experience. After participating in the workshops, I have a different outlook on multiculturalism and tolerance.

I learnt a lot during the workshops. I did not even realize how much history there was around me. I was really not aware of it. A lot happened in Węgrów not only during the war. There lived a rabbi, there was the Great Synagogue, a small fragment of the Jewish cemetery is preserved until today.

School of Dialogue program in Węgrów was made possible by the support from ZNAK PUBLISHING HOUSE.