Zamość is a place like no other. Known as the Pearl of the Renaissance, City of Arcades and Padova of the North, with its Old Town inscribed onto UNESCO’s World Heritage list, the town is a popular tourist destination. Zamość was established in the 16th century by Jan Zamoyski, who invited Sephardic Jews to settle in his town. Jews from Spain, Turkey and Italy arrived in Zamość well before the Ashkenazis. At the turn of the 16th and 17th centuries, a Jewish district was established, with a wooden synagogue that was later replaced by a brick one. Next door to the synagogue stood a beit midrash, mikveh and Jewish hospital, while the Jewish cemetery was located just outside the city walls. The town became an important center for Jewish religious studies. Between the two World Wars, half of Zamość residents were Jewish. Jews lived not only in the Jewish district, in the area around the Salt Market Square (Rynek Solny) but also  in the New Settlement (Nowa Osada) – a suburban part of Zamość at the time, where Germans established the ghetto during World War II. It is this area that became the focus for high school students who participated in School of Dialogue workshops. “The many tour groups that visit our town never go there. We decided to change this and present the forgotten history and heritage of Jewish Zamość”, explain the students.

Unlike the Old Town, the New Settlement is not considered by town residents to be part of Jewish Zamość. Nothing is left of the Jewish cemetery – a Cultural Center stands in its place, while the former synagogue now houses a preschool. The building of the students’ high school used to be home to Coeducational Liberal Arts Grammar School of the local Jewish community, with many Jewish female students. In 2014 , during renovations, workers found a number of old documents, such as birth certificates and graduation reports of female Jewish students. Examining these documents was an extremely moving experience for workshop participants – they started to feel genuinely connected to the history School od Dialogue educators, Anna Desponds and Izabela Murawska, were telling them about throughout the workshops. Their teacher, who was also the project’s supervisor and a local activist, shared archival photos from Zamość with his students. 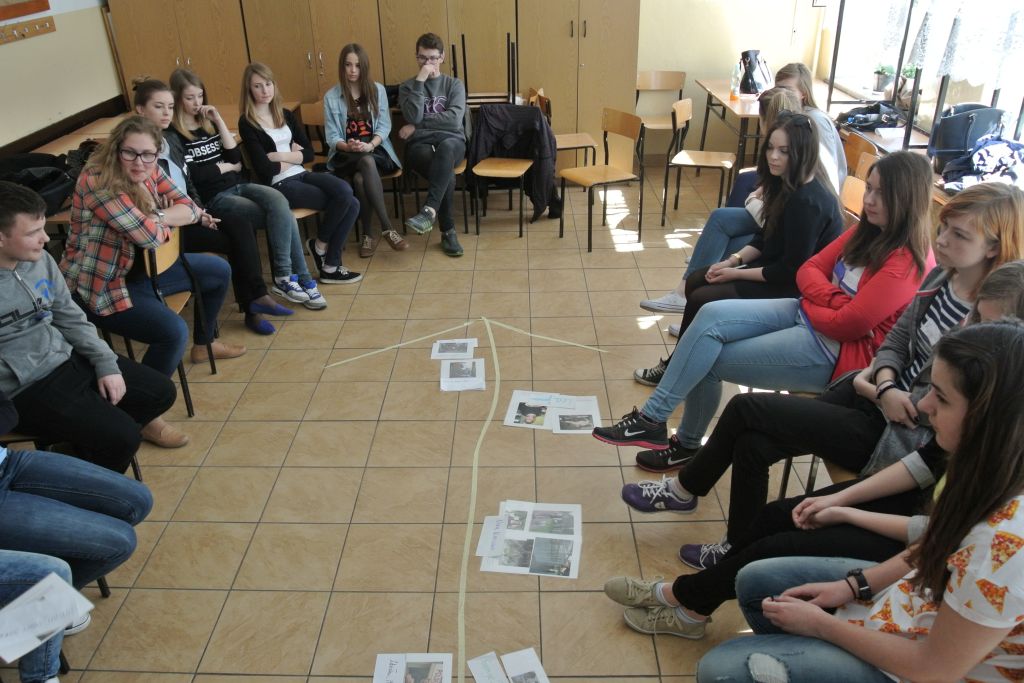 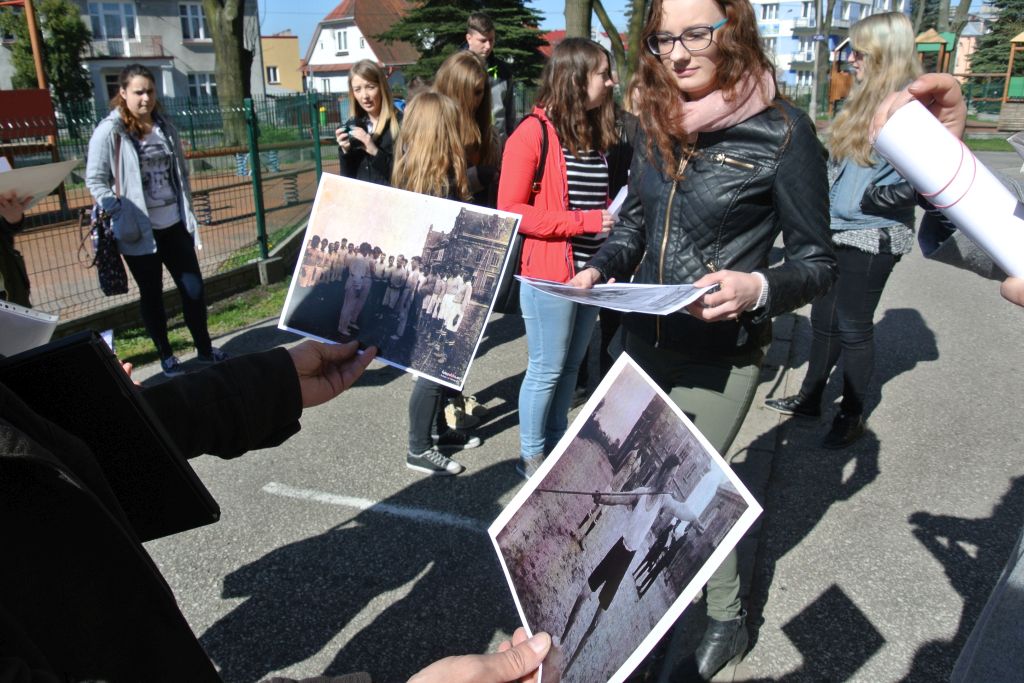 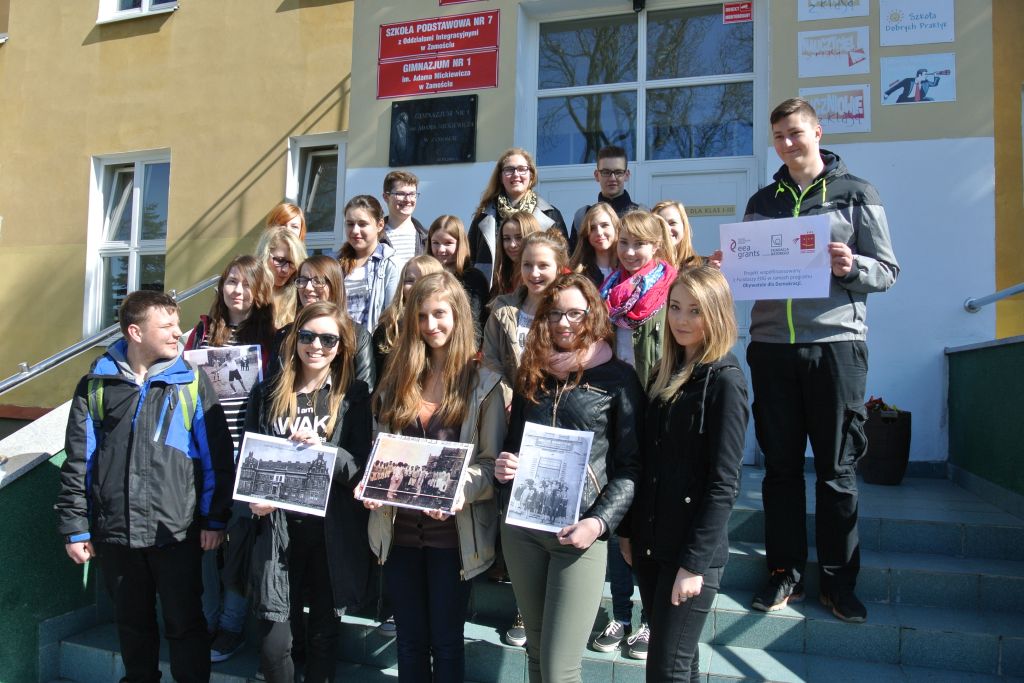 The workshops made them aware of the centuries-long coexistence of Poles and Jews in Zamość. They have since started referring to Zamość as the “town of ghosts” and this catchphrase became the leitmotif of their walking tour. Handmade invitations for a historical walk through Jewish Zamość were delivered in person to special guests: deputy mayor of Zamość, reporter for Catholic Radio Zamość and the school’s principal.

Basing on the recovered documents and archival photographs, high school students from Zamość mapped out a route for a tour of Jewish Zamość, which they had the opportunity to present first to a delegation of Italian Jews and then to younger students from the local Junior HighSchool no.1. Project participants wanted to present the past as accurately as possible – the tour guides donned pre-war school uniforms, while various objects were presented in the course of the tour: grade reports of the school’s Jewish students, including that of Maria Ludwika Leśmian, daughter of famous poet Bolesław Leśmian, who graduated from the school in 1930.

Students also presented reproduced bottle labels from “Livonia” brewery, run before the War by the brother of famous writer Icchok Lejb Perec. Tour participants also visited the no-longer-existing Jewish cemetery (the area of which is occupied by a Cultural Center), where from the so-called Beetroot Ramp – deportations to Bełżec extermination camp would depart. The story about deportations and commemoration of Jewish victims through leaving stones at the deportation site moved all participants deeply. Additionally, students prepared a photo exhibition “Then and Now”, which juxtaposed archival photographs of various sites with contemporary ones, made by students themselves.

The tour proved to be especially popular among teachers and local authorities. Zamość deputy mayor Andrzej Zastąpiło offered to sponsor a guidebook through the New Town that the students would prepare, while junior high  school teachers from Zamość and its surroundings  were already making plans to have their students participate in Jewish Zamość tours.

Forum for Dialogue is an organization that is very much needed in today’s world, especially for young people. Through the Forum, we were able to discover the history or Zamość and work together with the rest of the students  to create something truly special.

I very much like the idea of making people aware of the Jewish history of their towns, as most of our society judges not only Jews, but also minorities in general by arbitrary stereotypes. It’s worthwhile to learn to look from a different perspective, so that you can actually form your own independent opinion.

Program co-financed from the funds granted by Citizens for Democracy program, financed through the EEA grants