Groups of students are bending over old school books from 1920s and 1930s. Time-yellowed pages handwritten in neat cursive – students sift through year after year. And then – a surprise! A few students discover their grandparents’ names. In a moment, in the course of School of Dialogue workshops, they will learn that their grandparents’ school friends were almost exclusively Jewish, as Jews comprised 88% of the local population. The town had its own synagogue, two Jewish cemeteries and a school with an amateur Jewish theater that would also hold productions in Polish. In 1940, the Russian army entered Zaręby and the Jewish school became a Russian one. In 1941 almost all the local Jews were murdered by Germans in the forests around the village of Mianówek. The old Jewish cemetery was completely devastated. No tombstones remain at the second cemetery, either; its area was turned into a farming field. The fire department building stands on the site of the synagogue. Prewar houses can still be seen at Farna Street, Gęsia Street and Brewki Zakościelne.

Meeting Forum’s educators and discovering their own family roots in prewar schoolbooks sparked students’ interest in the history of their hometown. In the Jewish history as well. Already after the first workshop, School of Dialogue participants decided to ask their grandparents what they remember from prewar times. Through these conversations, students were able to pinpont the locations of a mill, bakery and the best prewar soda shop. They also discovered the most important places for the local Jewish community, like the site of the former synagogue and Jewish cemeteries as well as hideouts used by Jews during World War II. They understood the reason for street names like Gęsia (Goose) or Młynarska (Miller).

For their individual project, junior high school students prepared a fascinating tour of Jewish Zaręby Kościelne, which was accompanied by a screening of a prewar film about the town and a presentation by Ms. Elwira Krupa, their school’s graduate and author of a publication about Jews in Zaręby. 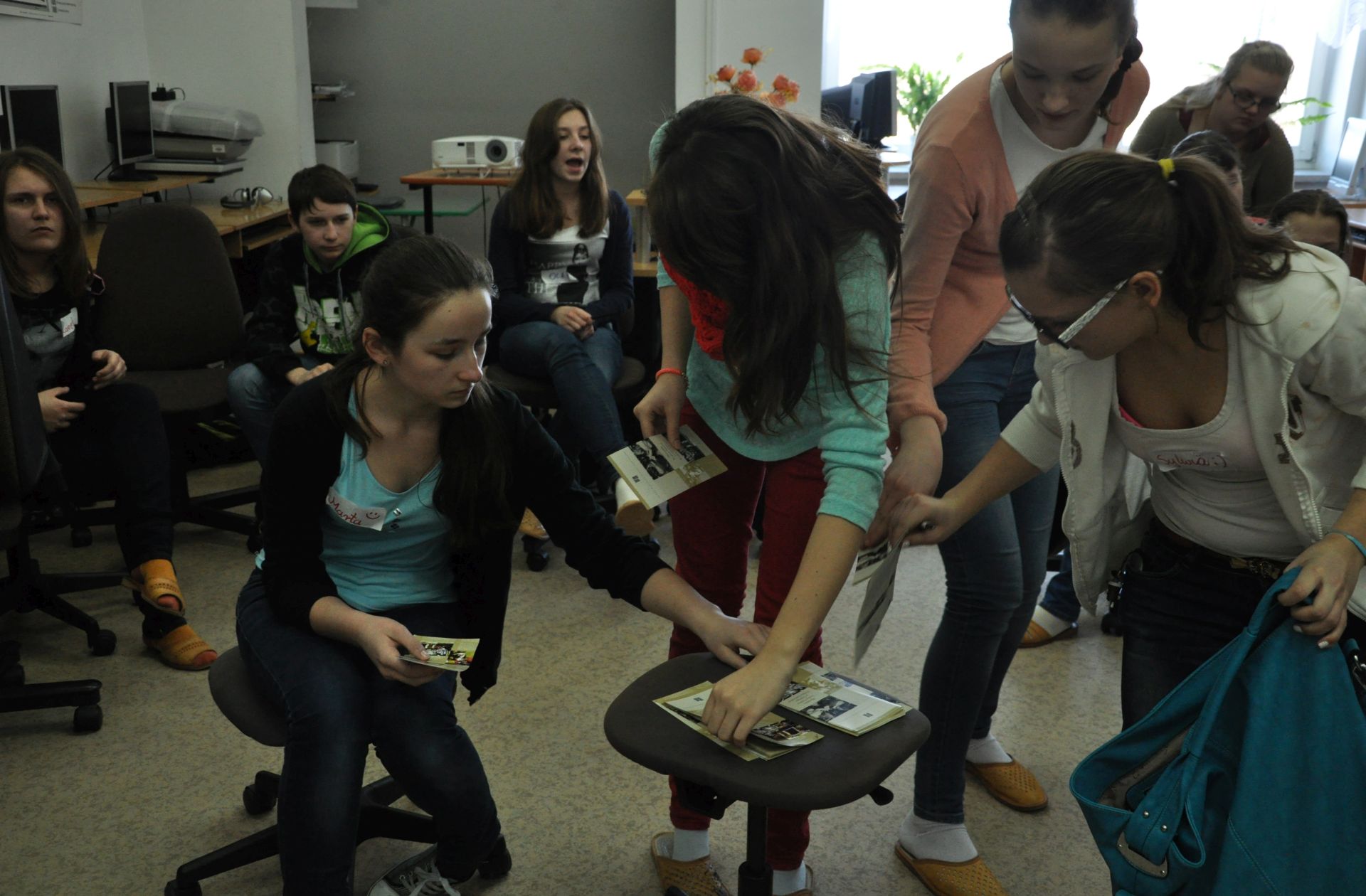 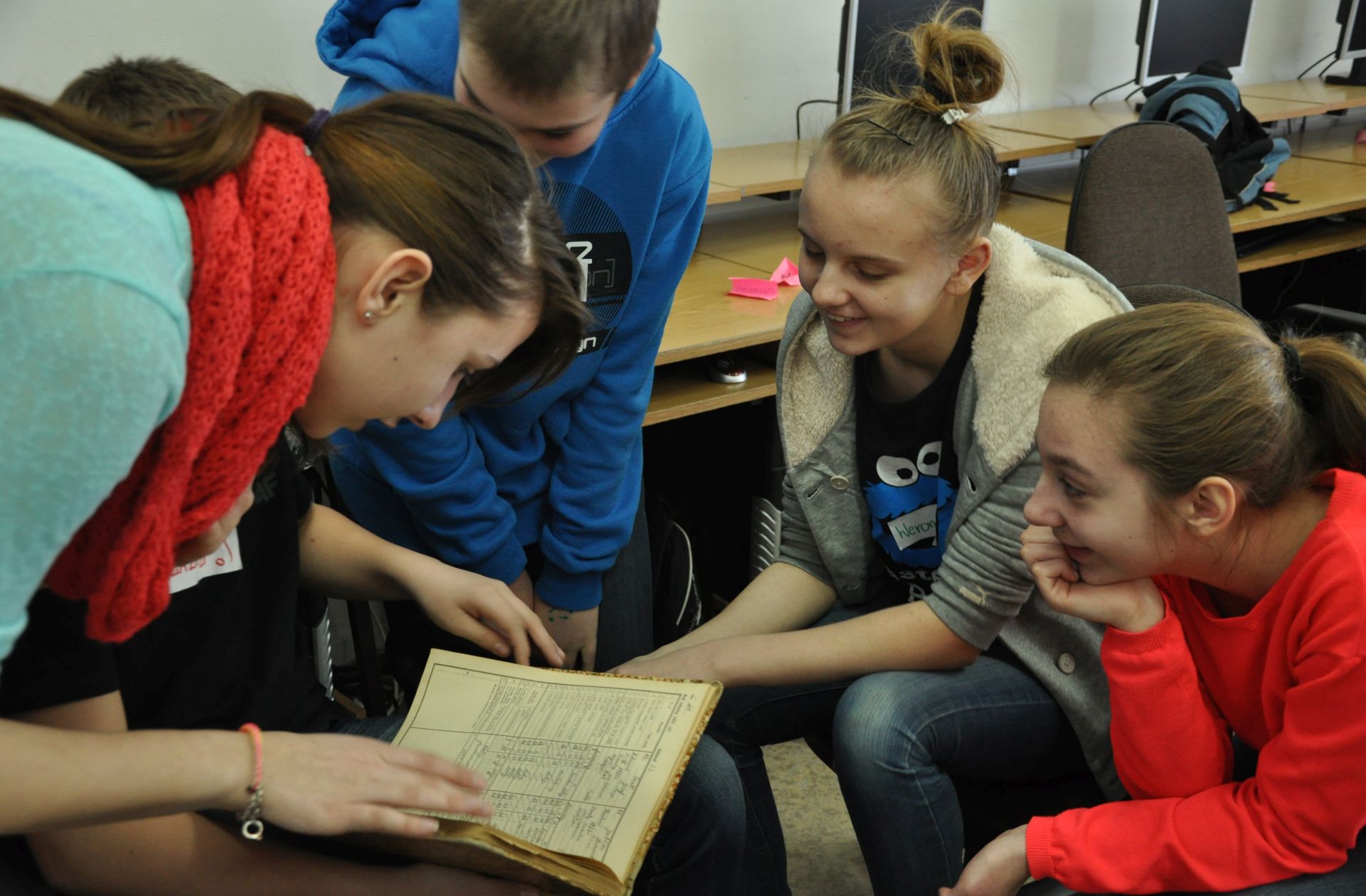 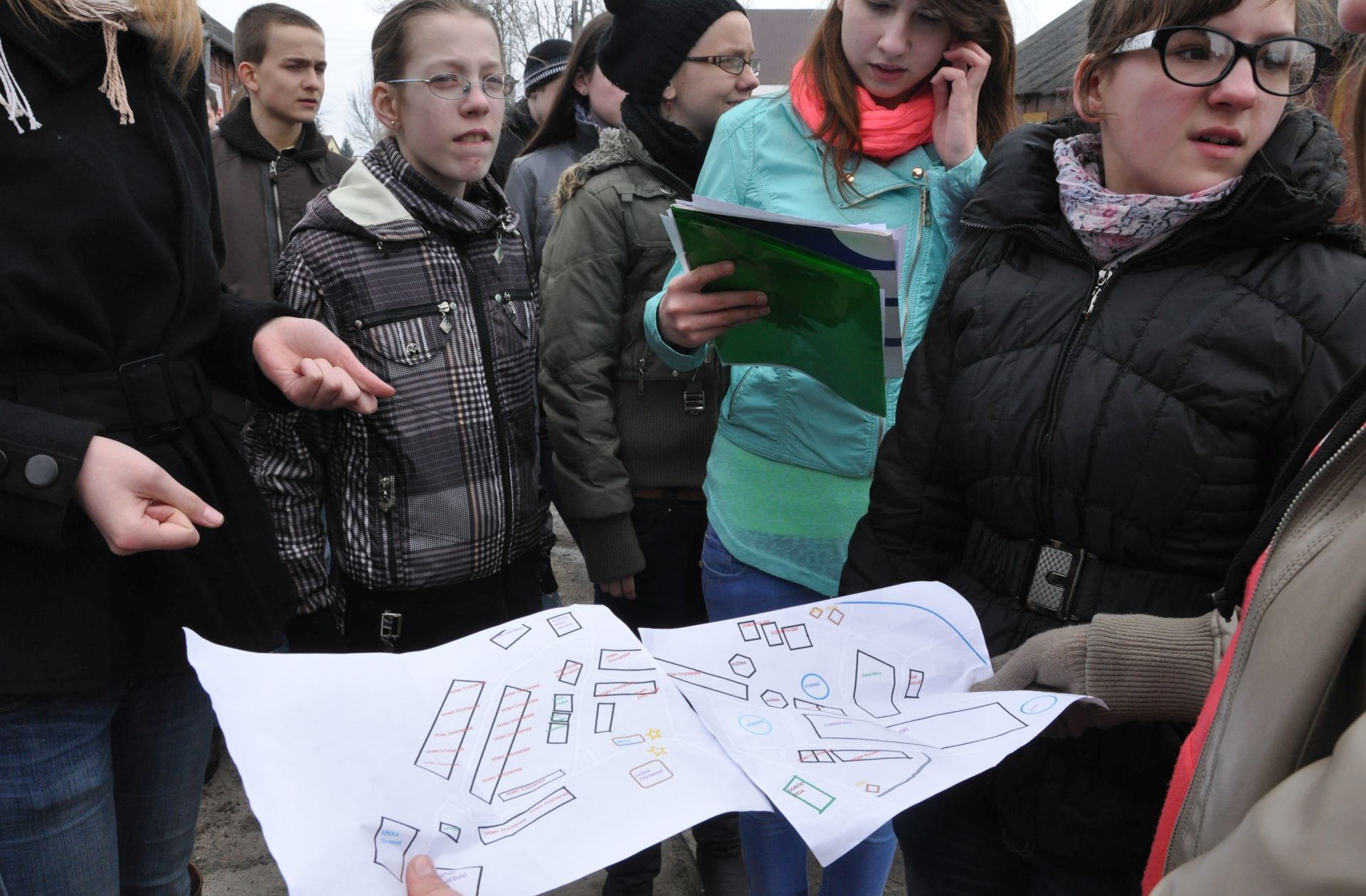 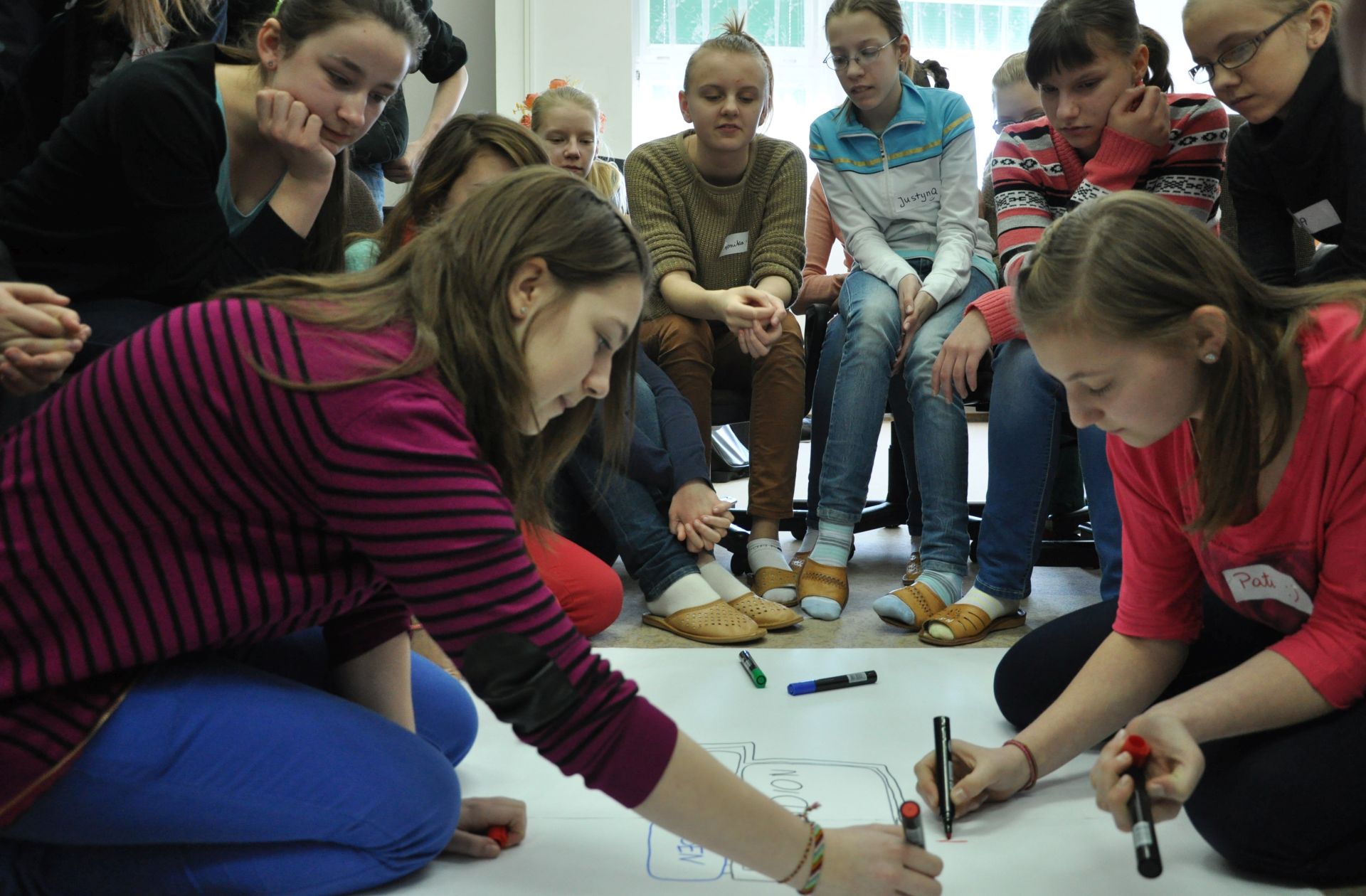 The tour begins at Farna Street, where a few wooden houses from early 20th century still remain; twelve of them are historic monuments. It is here that tour participants hear about the Holocaust in Zaręby – about the murder committed by German soldiers in Mianówek in 1941. At the market square, one of the students – Ola – tells the group about Jewish craftsmen: Lustyk the tailor and Abram the doctor. At Młynarska Street, Emilia talks about her great grandparents, Helena and Aleksander Majewski, who hid the Grynszpan family of mill owners during the war and were later honored with the title of Righteous Among Nations. Today the mill is gone and a wedding hall called “The Old Mill” stands in its place. In front of the fire department Patrycja talks about the local synagogue, as remembered by Mendi Kristal:
“As children, we used to play near the big synagogue, a handsome red brick building with a 3-story tower, great wide doors and long, wide windows. Those windows – what a mixture of various colors: green, yellow, red and blue around stars of David, also made of glass.

Those windows made the synagogue exceptionally beautiful on the outside. The interior was a treasure of art. So much fantasy, so much beauty, such originality as most I have ever seen. “ Patrycja also mentions the mikveh, which once stood right next to the synagogue. Finally, Oliwia tells tour participants about the history of the school, the library and the amateur Jewish theater which also played Polish classics like “Krakovians and Mountaineers”.

The whole project makes students aware just how much the Jewish community contributed to the development of their town, which is reflected by the words of Czarek, one of the workshop participants:

“After School of Dialogue workshops I am now aware about the gigantic contribution of Jews to my town. I am happy to have gained so much knowledge about their culture. I also have a lot of respect for them to have managed to adapt to life in Zaręby in difficult times. I would also like to thank them for shaping the way this town looks to day.”

We learned about Shabbat, the Jewish cemetery and who a rabbi is. We also had a walking tour, where we presented prewar Zaręby thanks to the research we had done earlier. I didn’t know that there used to be 16 mills here!

We learned about the languages Jews would use for everyday matters and for prayers, how many practicing Jews lived in Zaręby, where they prayed and when the Shabbat begins. We also found old schoolbooks in our school where I was able to spot my grandfather’s name.