Żarki had been home to Poles, Jews, Germans and Russians since the 17th  century. Different cultures coexisted in Żarki, even though the town is of modest size. Before World War II, 600 Jewish families called Żarki their home and comprised the  majority of the local population. Jews mostly inhabited the area around the market square and nearby streets that were connected with the square through courtyards and entryways. The town was home to three synagogues and three Jewish cemeteries. During World War II, in February 1941, a ghetto was created around the old Market Square. Signs  forbidding entry to Poles delineated the ghetto’s borders. During the ghetto’s liquidation on October 6, 1942, Germans shot 300 Jews at one of the Jewish cemeteries. Others were deported to ghettos in Częstochowa and Radomsko as well as to the Treblinka death camp. One of the synagogues still stands, and the so-called New Jewish cemetery at Polna Street still remains. Its caretaker is Mr. Wojciech Mszyca, a history buff who salvaged the last Żarki doorframe with a visible indentation mark of the mezuzah.

In 2005, six locations of the Jewish Cultural Route were mapped out in Żarki. Each location now has a plaque in Polish and English. The local Cultural Center offers publications about pre-war Żarki; thus, the multicultural past of the town is in some ways acknowledged.

School of Dialogue workshops gave students the opportunity to gain more knowledge about this multicultural past. One of the workshop participants admitted: “Taking part in the Forum’s project made me think. The workshops made me realize how rich and diverse Jewish culture is. I am very happy to have had the opportunity to attend these workshops. I would like to learn more about Jewish culture in the future”. For their final project, students prepared a highly interactive walking tour through Jewish sites around their town. Stops on the tour were interspersed with games, tasks to complete and presentations of archival photographs. 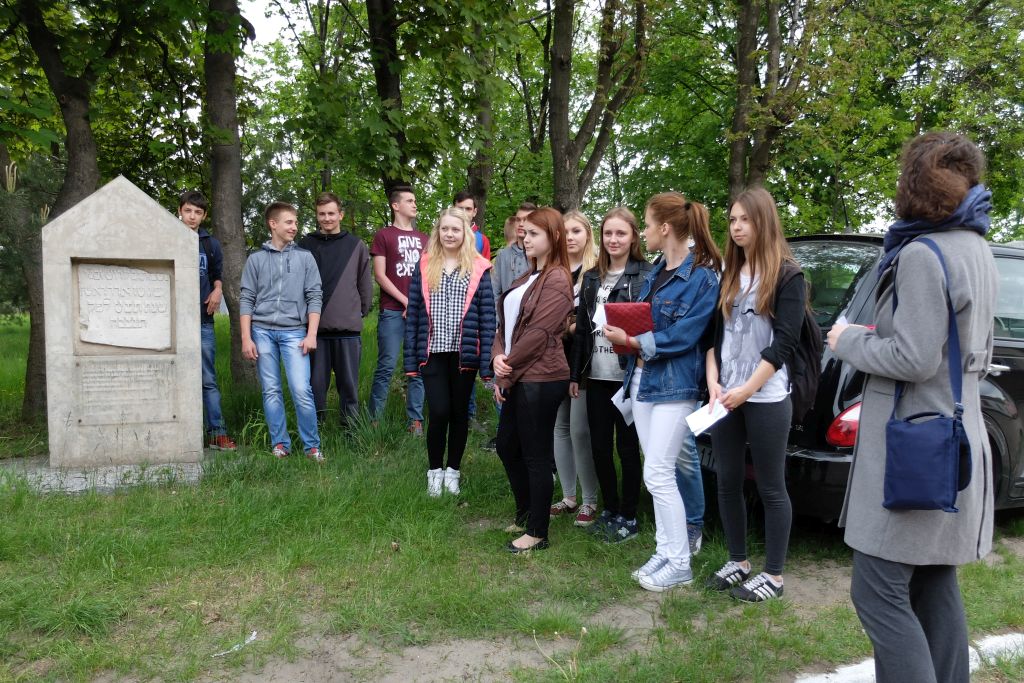 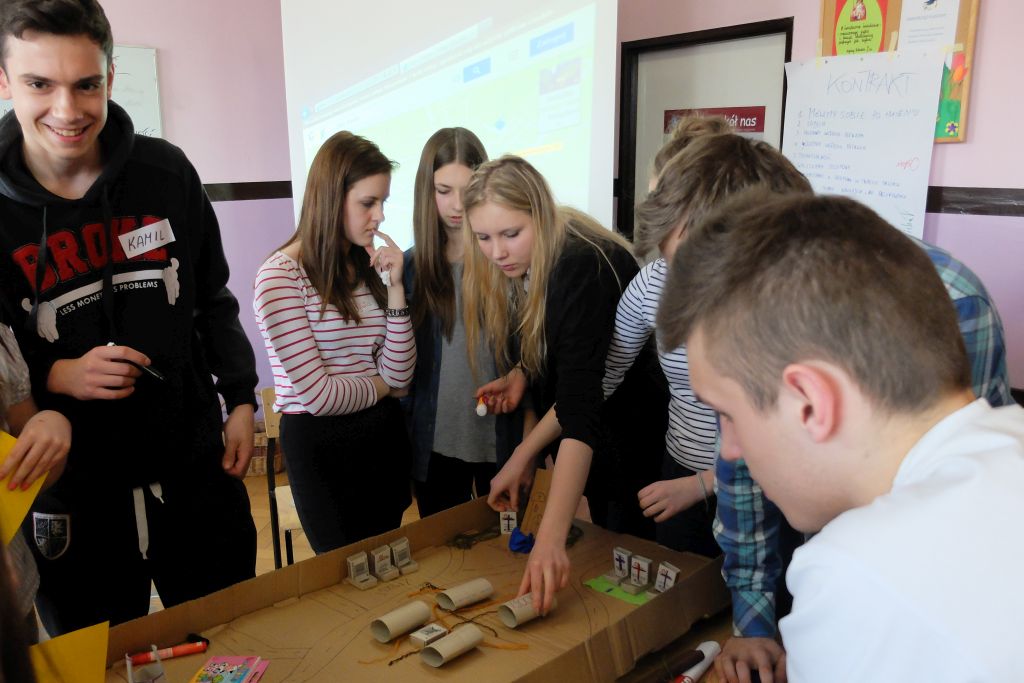 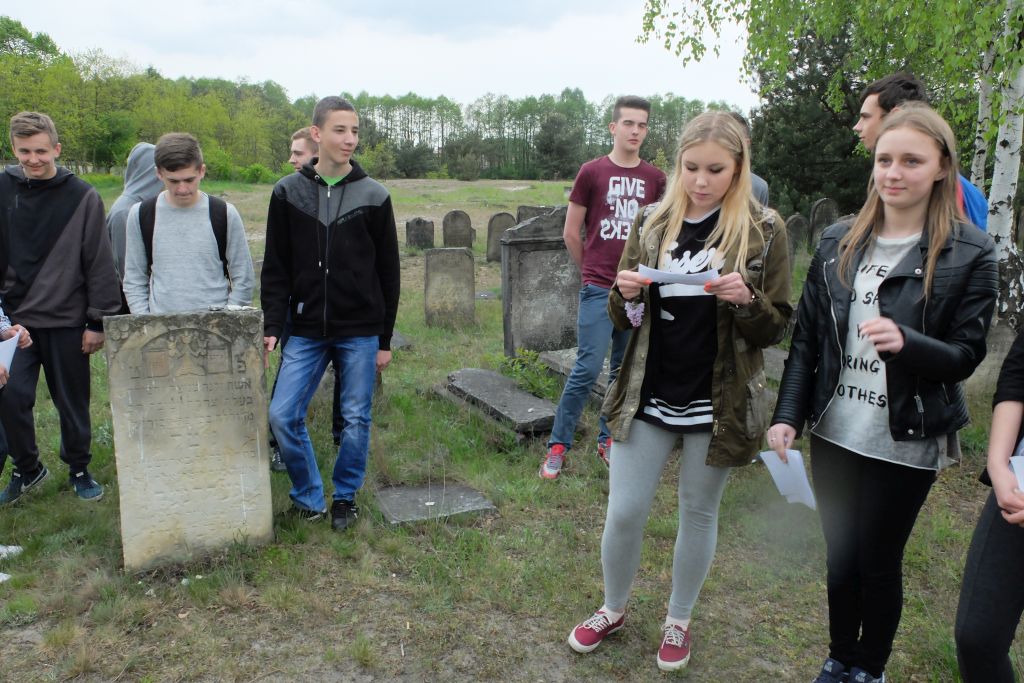 The tour was designed for sixth-graders from the local elementary school and their teacher. Workshop participants turned out to be very apt tour guides. Stories about the history and culture of Żarki Jews were interspersed with interesting tasks for tour participants to complete. These were done very efficiently, with participants searching for symbols on cemetery headstones (the well-preserved and rare examples of matzevot in cast iron were pointed out to the students by Dr Krzysztof Tabaka, a historian invited to the tour by the Forum educators). Tour participants also answered questions written on paper slips and hidden at consecutive stops.. Students learned through playing games; the walk’s interactive form made it easy to remember stories they heard from their tour-guides.

Stories and presentations were featured in a number of stops along the way.

In the Old Market Square, students read out loud a text about Esther, while their guests were handed out “distractors” such as tambourines, sticks and bottles filled with corn kernels. The participants’ task was to make as much noise as possible with the tools provided each time they would hear Haman’s name. Participants were happy to oblige and join the game, known as Purim schpiel. Additionally, School of Dialogue students prepared source documents, including an original copy of the letter from Żarki ghetto written in Polish by someone who was Jewish – a desperate request for help. An enlarged photograph of the document and the text itself made a big impression on tour participants. Another moving stop was a visit to the former house of the Płaczek family, whose members received the title of Righteous Among the Nations for risking their lives to save Mr. Eli Zborowski. Students also visited a renovated synagogue that now serves as Municipal Cultural Center.

Taking part in Forum’s project made me think. The workshops made me realize how rich and diverse Jewish culture is. I am very happy to have had the opportunity to attend these workshops. I would like to learn more about Jewish culture in the future.

Jewish culture does not seem that foreign anymore. I also learned a lot about the town of my school. I was taught tolerance for other religions and cultures.