“Now we know where tailor Lubraniecki, a Jew from Zbąszyń, lived; why Leopold Cohn, a Jew from the former Strzelecka Street, was so well respected and why the Jewish cemetery is so far from the town’s center” claimed Zbąszyń students after completing School of Dialogue workshops. They explain that their project “Zbąszyń balagan” [the word is the same in Polish, Hebrew and Yiddish] is a positive reference to the town’s multicultural past and to the “mess” [balagan] that happened in 1938, when Germans began to expel Jews with Polish citizenship from the Reich. In consequence, around 5000 Jews moved to Zbąszyń . The Polish government refused to admit the deportees and forbade Jews from leaving Zbąszyń. Thus, an internment camp was created. The Jewish Kehillal existed in Zbąszyń from the 18th century. The town had its own synagogue, Jewish school, a Chevra Kadisha, as well as chapters of Israeli Women’s Union and Youth Union. After World War I, the Jewish community amounted to only 54 people, so in 1932 it was annexed to the newly-established Kehilla in Nowy Tomyśl. Following the outbreak of World War II, Zbąszyń’s Jews were transferred to camps and ghettos. In 1941, Germans created a forced labor camp in Zbąszyń, where many Jews died of exhaustion or in executions. Almost no traces of Jewish Zbąszyń remain today. The synagogue was located in the northern part of town, at what is now called the Jewish Street (Żydowska Street).

In the 1960s, the building was converted into a residential house. The Jewish cemetery was in the same part of the town, in the area that is now Kawczyńskiego neighborhood. It was destroyed in 1939 by the Germans. Ultimately, the cemetery was liquidated in the 1970s. Since 1992, a matzevah-shaped commemorative plaque informs about the site’s original use.

After the workshops, students quickly became involved in School of Dialogue project preparation. They decided that the tour they would prepare through Jewish Zbąszyń would take the form of a bike rally. Anyone who registered earlier via e-mail could participate in the tour. “The train station would be the tour of departure for the tour, because it symbolizes a journey, a beginning of something new, a hope for a better tomorrow. It was also here that on October 28, 1938, thousands of Jews deported from Germany arrived in Zbąszyń. In the course of the tour we plan to present our visitors with the story of some of those deported Jews, and to show sites connected with their presence” the students decided. 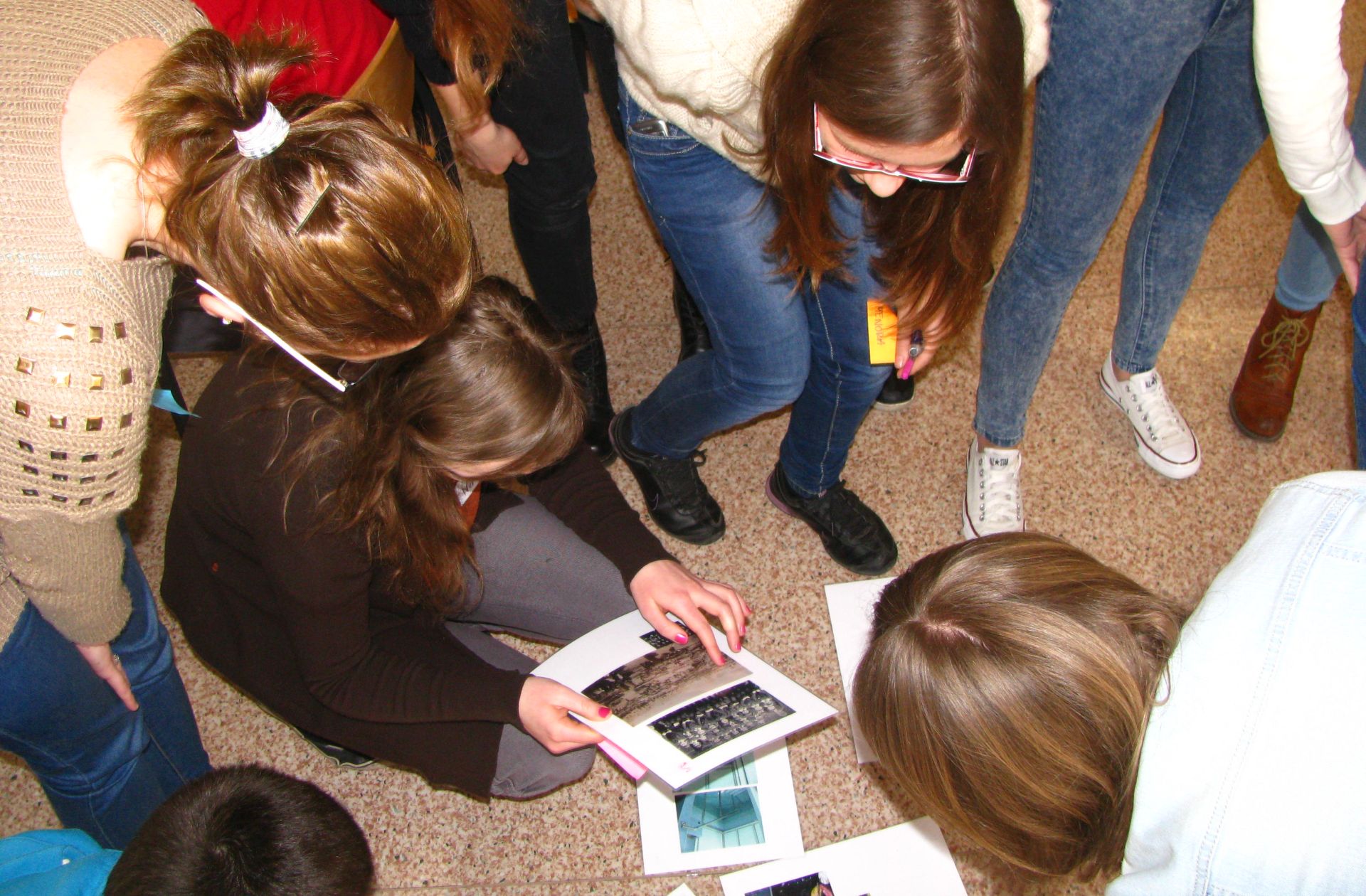 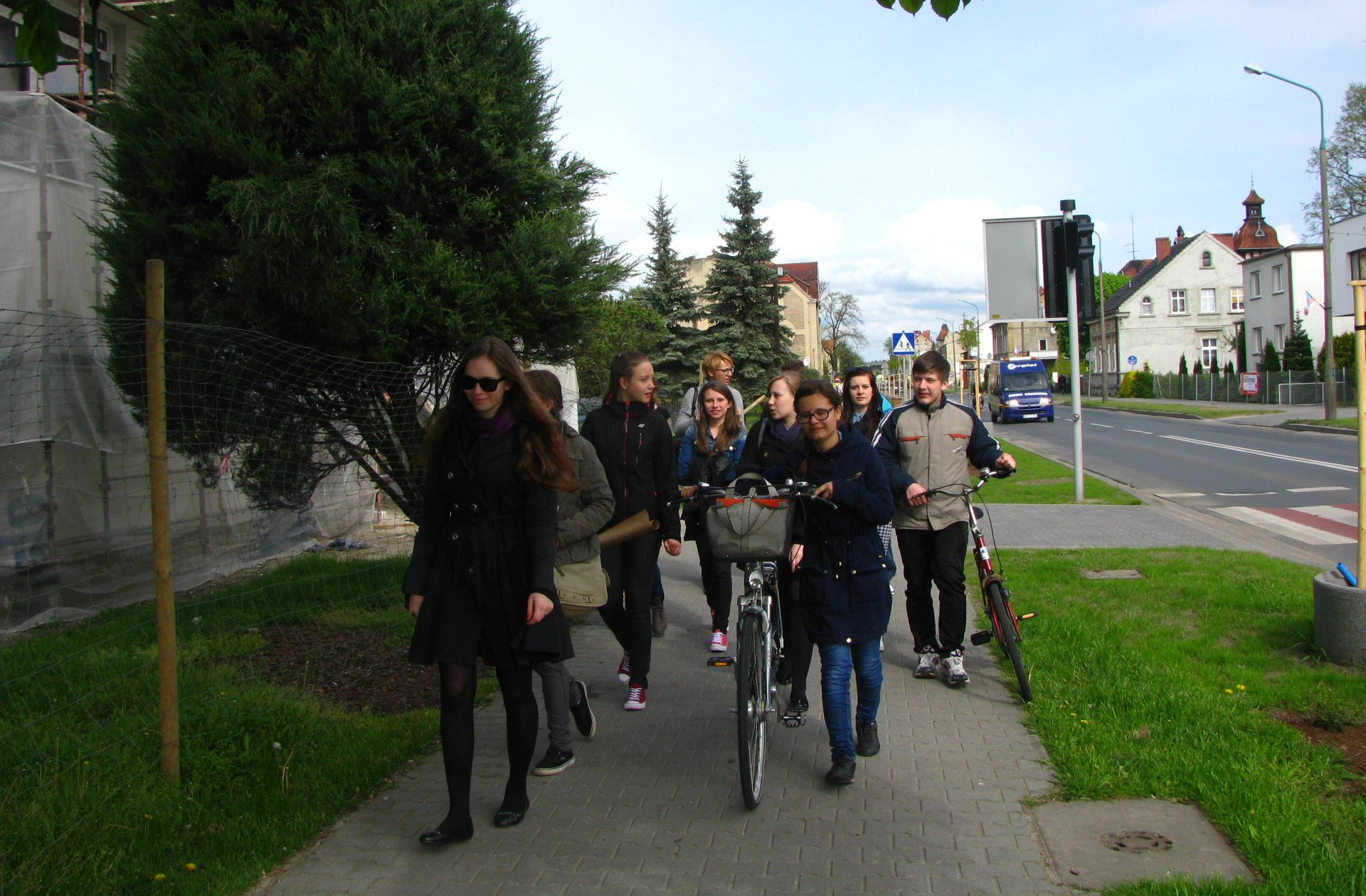 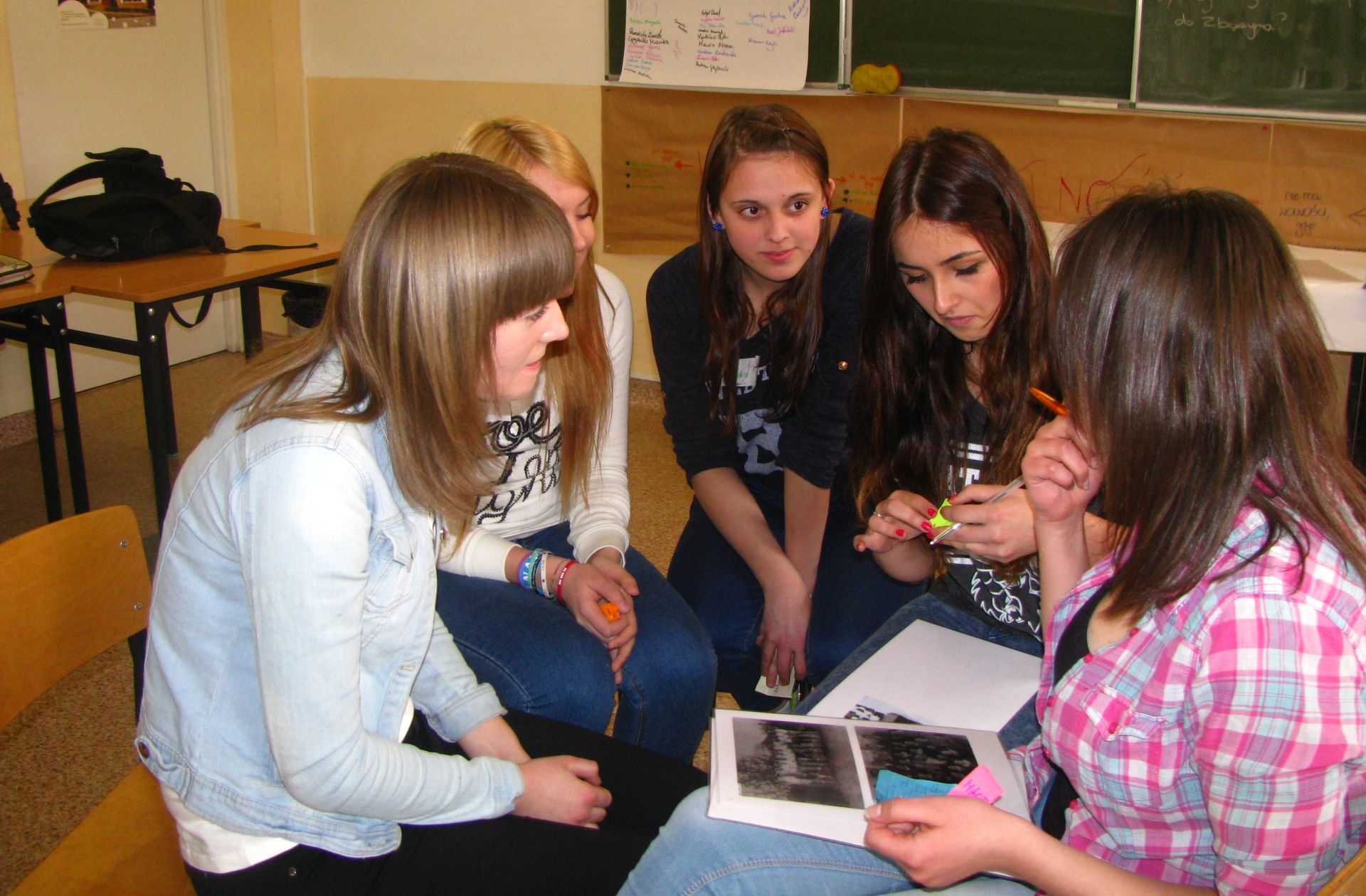 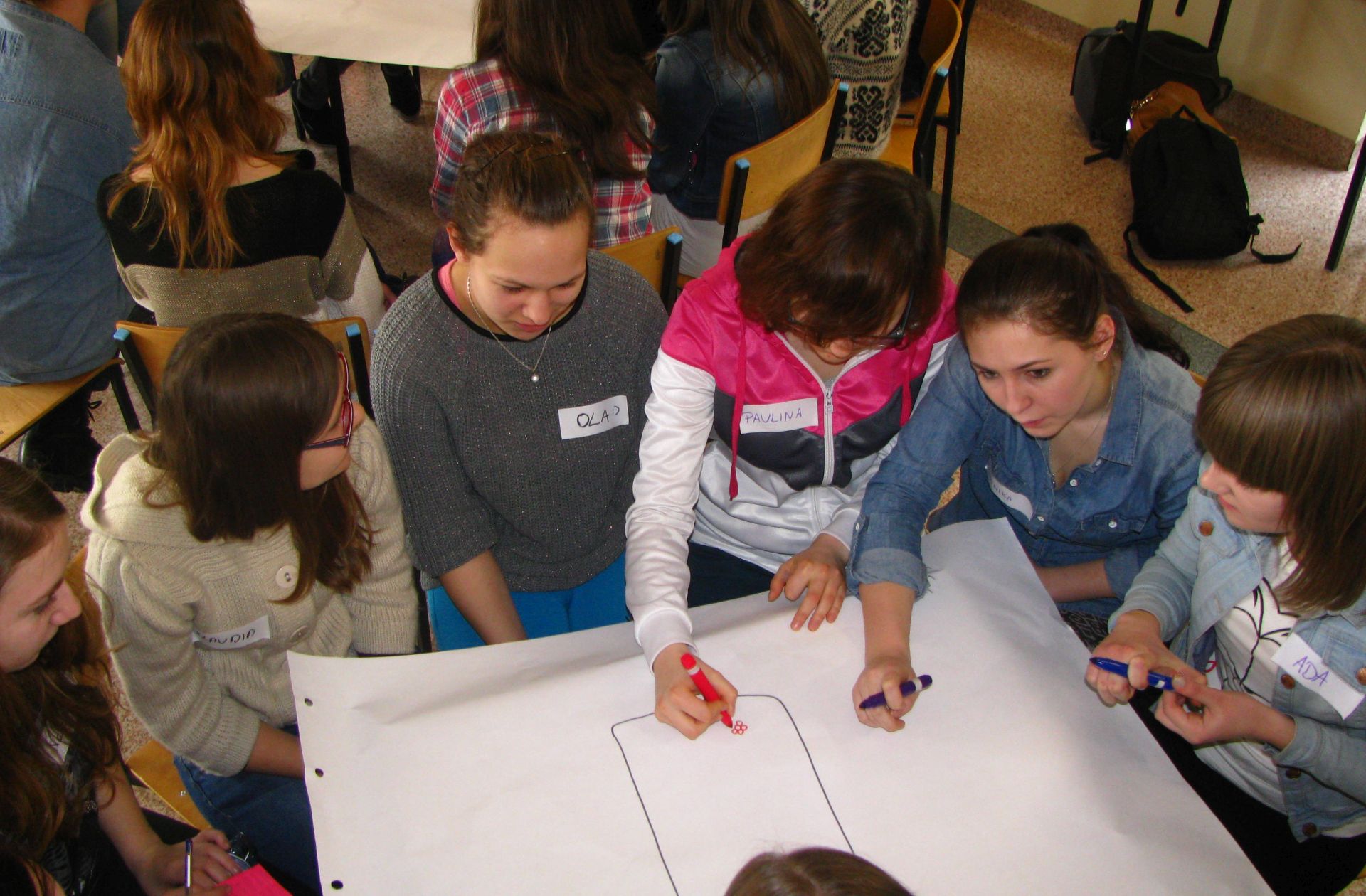 At 3PM on June 15, 2014, students greeted their guests at platform 1 of the train station and then guided them towards the office of “Nasz dom” (Our home) foundation. There, they played songs like “Anatewka”, “Wszyscy braćmi być powinni”(“We all should be brothers”) and recited the poem “Far from home” (“Daleko od domu”). Tour participants also had the opportunity to hear a few original testimonies of the deportees. Next stop was in the building of a former post office, where tour participants received copies of authentic letters written by Jews in Zbąszyń. One of them was a letter “from a father to a son” with an interesting story connected to it. “I read all your letters, as you can tell, I am still in Zbąszyń. (…) I hope that I’ll be able to return to Berlin this month. Your mom is growing restless, but there’s nothing I can do. (…) I don’t live with major Beckert now, but in a Jewish home at 25 Senatorska Street with Mr. Weiman” wrote a father to his son Avraham Segal, who survived in a child transport to England and then went on to Palestine. Many years later, in Israel, Avraham gave this letter to a teacher who was going to visit Zbąszyń on a youth exchange program. In this way, the letter reached School of Dialogue graduates, who researched the story of the Weiman family and told it to their tour participants.

The next stop was the building of the former Committee to Aide the Jews and the Jewish school. The site of a temporary synagogue is now occupied by a pizzeria. Thanks to the support from the pizzeria owner, tour participants could sample Jewish dishes and learn basic Hebrew there. The tour ended at the cemetery, where participants lay the stones they had brought along for the tour.

The endeavor required weeks and weeks of preparations. Students worked closely with local activists. Ms. Urszula Bordych from the regional museum helped immensely, providing a lot of information on Zbąszyń’s past and sharing her collection of postcards from prewar Zbąszyń that the students used during their tour. Additional assistance was provided by Mr. Wacław Czuchwicki, author of the book “Jews in Zbąszyń and more” (“Żydzi w Zbąszyńiu i nie tylko”), Mr.Wojciech Olejniczak, co-author of the book “See you next year in Jerusalem – 1938 deportations of Polish Jews from Germany to Zbąszyń” (“Do zobaczenia za rok w Jerozolimie – deportacje polskich Żydów w 1938 roku z Niemiec do Zbąszyńia”) and Mr. Piotr Weber, a teacher and regional history expert. Additionally, students wrote their own report using the data from the Institute of National Remembrance about families living in Zbąszyń before 1939. They also cleaned the Jewish cemetery prior to the tour. To promote their event, students created pins with the project’s logo as well as stickers with the statement: “School of Dialogue: we’re learning to be human” and a QR code that would redirect to Zbąszyń Balagan FB page. The school’s shop funded the printing of the stickers. Students arranged a meeting with Zbąszyń’s mayor to petition him for financial assistance for printing their beautifully designed posters. In the course of the meeting, students told the mayor about the project and received the required funds as well as permission to create a mural; the idea was to make the project visible in public space. Soon, the sign “We’re learning to be human” appeared on the school wall and on a plaster slab in the town center. All these activities received significant attention from the local media; and the students continue to work toward commemorating the Jewish community of Zbąszyń.

I think these workshops showed us how much you can learn about a different culture and how to ‘create something out of nothing’, because we gathered all the information ourselves and reached the goal we had set out for ourselves alone.

I learned to work in a team, to do things with others. I became more open and sociable, because we needed to arrange meetings with different people, obtain permissions and permits.

History became a fascinating subject and it turned out that the town we live in has many secrets and undiscovered sites.