Continuing School of Dialogue in 2016

Often a Jewish street (“ulica Żydowska”) runs through the center of many Polish towns – this is the street where Jews lived, prayed and sold goods: shoes in Poznań, salt in Zamość, flour and bread in Lublin and a little bit of everything else as well. In Żelechów, it was the Christian street that was different from others, as Jews comprised the overwhelming majority of the town residents. It was dubbed “Kościółkowa” or “Smallchurch” street, now its name is Wojska Polskiego Avenue From the 18th century, Jews would comprise 55-80% of Żelechów population. It is thanks to the Jewish residents that a power plant was built in the town in the interwar period. The plant operated from dusk until dawn, illuminating the more affluent houses come nighttime. Although altered, the plant’s building survived to this day. So did the remains of the mikveh; upon opening an unsecured hatch, you see stairs and a pool filled with water.

Sadly, the synagogue did not survive to the present. It was burnt by the Germans in 1939, along with Jews that were locked inside. In the following year, Germans created a ghetto in Żelechów that they liquidated in 1942, executing 300 people and sending the rest to Treblinka extermination camp.

A few Jewish houses at Lelewela Street and the rabbi’s house at Traugutta Street still stand.

Workshop and project-work format of School of Dialogue sessions was new to Żelechów’s vocational technical high school students – they never attended any workshops and never organized a big event themselves. They were shy about speaking out in the classroom and worried whether they would manage to create their own tour around Jewish Żelechów. Forum educators, Michalina Laskowska and Jagoda Szkarłat, imparted not only a lot of new information about Judaism and Jewish culture to the students, but also equipped them with a range of practical skills; they provided assistance, motivation and support. Thus, the final outcome went beyond students’ expectations. 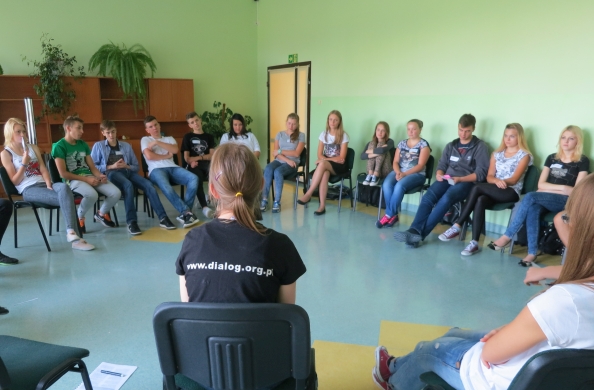 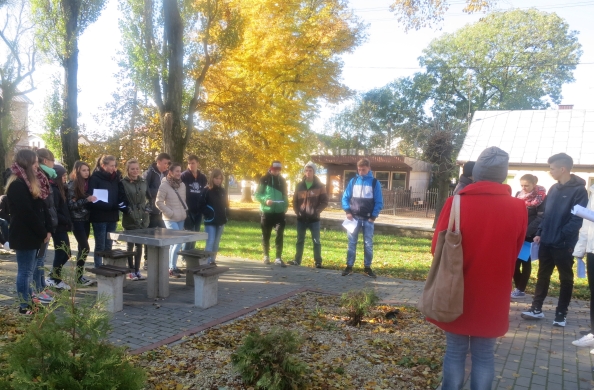 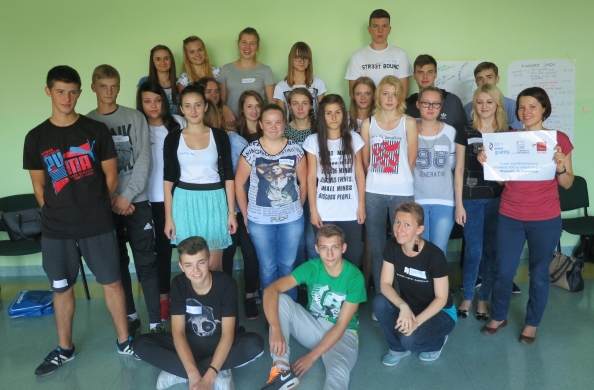 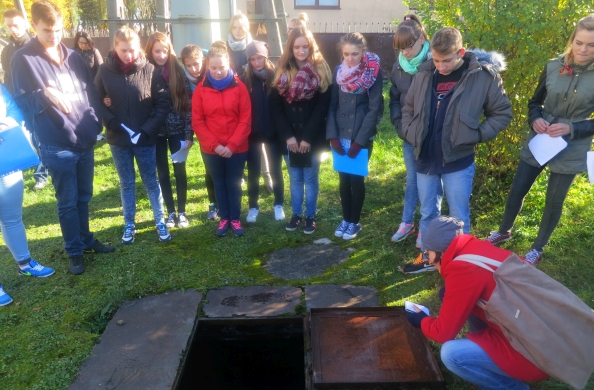 Before the tour, students connected with Mr. Józef Pszkit, who attended school before World War II and had had Jewish classmates. He told them about the Jewish bakeries at the corner of Weissenberga/Wojska Polskiego and Kościuszki/Przechodnia Streets; about Mr. Schudrich’s pharmacy store, where medicine for all medical needs could be found; about the synagogue, whose location is now a park; and about a cheder that stood next to the synagogue, attended by Jewish boys. He also told them about the “expulsion of bread” for Pesach and about painting matzevot in colors.

Students also contacted Polish-Israeli writer Ms. Halina Birenbaum whose grandparents lived in Żelechów and who paints a warm picture of the town in her memoirs: “In my mind, the name Żelechów is connected to the memories of my mother, grandparents and other members of a big and loving family – with their succulent Jewish language, traditions and customs typical for Jews from their town, with their amusing parables, beliefs, all this seems to imbue the soul from its very first day in this world…”

Students collected many archival photographs, while tour participant and Żelechów resident Jan Zduńczyk brought with him a prewar electricity bill, elements of a prewar board game, a book in Yiddish and a button.

Tour participants were led to Weissenberga Street and to the building of the former power plant, which stopped operating after the war. Then to the so-called swine market (“świński rynek”) and to the house of Żelechów’s last rabbi, where plywood now covers all the windows. Next stop was what remains of the mikveh, with the pool still filled with water. In the course of the tour, students also talked about the most famous Jews of Żelechów: writer Jakub Meir Weissenberg, Jechiel Lerer and painter Jakub Rotbaum.

All participants seemed to have enjoyed the tour. Judging by what students say about the project, School of Dialogue meant a lot to them: “In the course of the project I learned that working together, helping each other out pays off, but also I learned a lot about Jews from our town” says one of the workshop participants. “This program allowed me to adopt a more positive attitude not only towards Jews, but also towards local residents. I met many new people in my school and saw that it is possible to create something useful, interesting and inspiring even with ‘strangers’” adds another participant.

In the course of the project I learned that working together, helping each other out pays off, but also I learned a lot about Jews from our town.

I had negative views about this town and its local residents. “This program allowed me to adopt a more positive attitude not only towards the Jews, but also the local residents. I met many new people in my school and saw that it is possible to create something useful, interesting and inspiring even with ‘strangers’.

This project allowed me to also learn a little bit about myself, because the focus was not only on the Jewish community, but also on us.