Biłgoraj is a small town of just under thirty thousand residents in Lubelskie Voivodeship. It is probably closer to Lviv than to Warsaw. Before World War II, the town was inhabited by around 5,000 Jews: merchants and artisans, paupers and beggars, bankers, entrepreneurs and many others about whom no information exists. Frampolska and Lubelska Streets as well as the Main Square were almost completely Jewish.

There used to be three cemeteries in the town, but traces of only one remain in what is now Piaski, a suburb of Biłgoraj. A monument commemorating Jews of Biłgoraj and the surrounding area now stands at the cemetery. Before World War II, Biłgoraj had a synagogue, built after the old wooden one – the largest of its kind in Zamość region thathad burnt down in a fire of 1867. No traces of either of these buildings remain – a residential building stands there instead.

This was where Forum for Dialogue educators, Ewelina Bartosik and Stanisław Niemojewski came to talk, discuss and ask questions. So that local students – through workshops, activities and joint walks – would be more able to understand the complex history of their town. Thus, at the beginning of December 2014, Biłgoraj’s high school students were able to conduct an location-based game for a younger group of 33 students. The route covered a few important locations from prewar Biłgoraj.

The three participating teams embarked on their routes from three different locations, but ultimately visited the same sites and learned about the same stories. In designated stops, older students described to the young players what the prewar town of Biłgoraj looked and was like. One of the stops, for example, was next to a bench dedicated to Isaac Bashevis Singer, Nobel Prize Winner in Literature, who wrote his books in Yiddish. Singer spent a lot of time in Biłgoraj, hometown of his grandfather, who was a local rabbi. 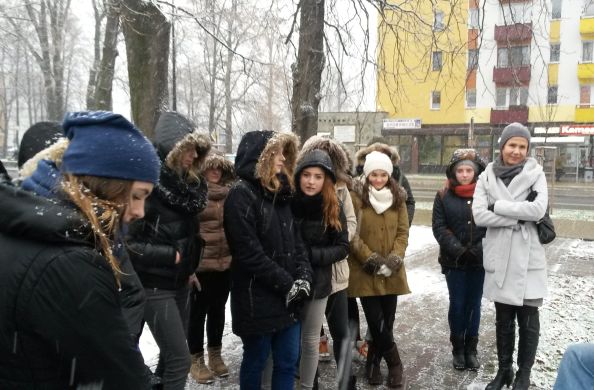 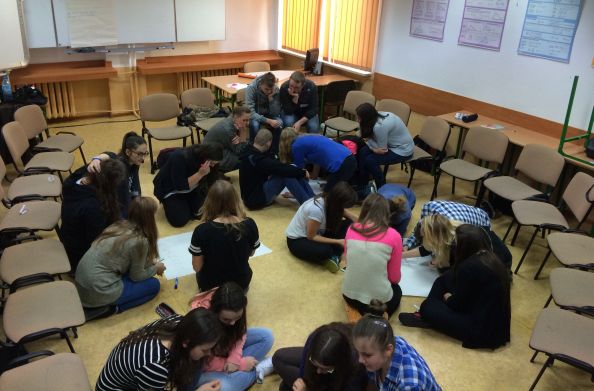 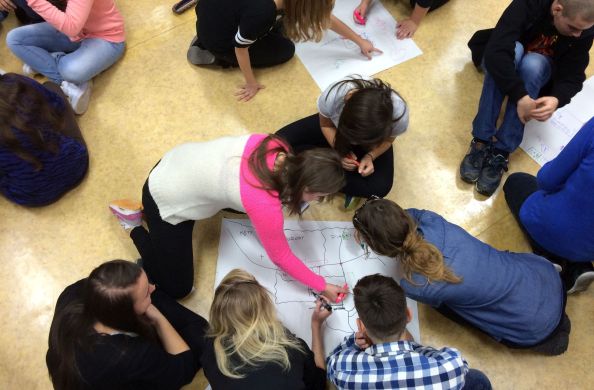 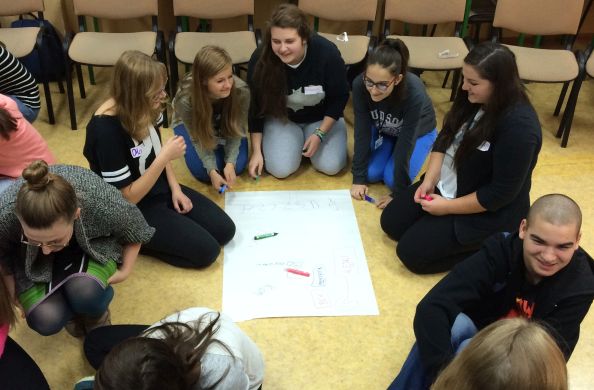 They also visited the construction site of the Shtetl on the Kresy Cultural Trail in Biłgoraj, where Poland’s only new synagogue is being currently built, with Singer’s museum right next to it. Here, one of the female students recounted the story of her grandfather who helped a young Jewish woman survive the war. Another two students awaited game participants at the main square, where 56 out of 68 houses that stood there before the war were Jewish. At this stop, students participating in the game would hear the story of a long-forgotten everyday life in prewar Biłgoraj. Another important stop, where teams met with workshop participants, was Sitarska Restaurant at 3 Maja Street, in the area that became the ghetto during the war. The next stop visited by game participants was Biłgoraj’s Culture Center, where a transit camp existed during the War. This was the departure point for Jewish transports heading to the death camp in Bełżec.

In the course of the walk, participating students learned about religious life of Biłgoraj Jews. They listened to stories at the site of the former synagogue complex at the intersection of Nadstawna and Lubelska Streets. Students would stay there for a little longer, trying to imagine what the no-longer-existing buildings looked like and to understand exactly what had happened there.

One of the final stops on the route was a monument commemorating the Jewish cemetery that was located right next to the high school, hidden away behind pine trees. During World War II, the cemetery was devastated by the Germans and its headstones were used to pave the floors of barracks erected on the site for the purpose of detaining Jews awaiting transport to Bełżec.

All participating teams met at the Jewish cemetery on Marii Konopnickiej Street, where some matzevot still remain after the War that underwent conservation in the years 1985-1986.

At the end of the location-based game, organizers quizzed participants testing their newly gained knowledge. An official awards ceremony followed, with highest scoring game participants receiving prizes.
Apart from the aforementioned location-based game, high school students organized group clean-up works at the Jewish cemetery at Marii Konopnickiej Street and shot a short film about Isaac Bashevis Singer “Following Singer”, which they uploaded to their school’s YouTube channel. Additionally, they set up a Facebook fanpage to inform Biłgoraj residents of their town’s Jewish past.

I did not suspect that there are so many things I do not know about Biłgoraj, even though I have lived here all my life.

I think it was cool to organize a tour and get others acquainted with Jewish culture.

When the workshops began in October, I already realized they would mean a lot to me.

School of Dialogue program in Biłgoraj was made possible by the support from Sheila and David Fuentes.