During the spring sessions of the School of Dialogue, conducted by Jolanta Goździk and Małgorzata Kruszewska from the Forum for Dialogue, Brzostek’s junior high school students expanded their knowledge about the town’s Jewish history. They got acquainted with Jewish culture, holidays and calendar. They discussed thorny issues, talked about the Holocaust and the complexity of post-war Jewish identity. They shared the emotions they experienced, talked about empathy and the importance of noticing other people. About multiculturalism, being different, stereotypes and the necessity of cultivating memory.

In Brzostek there is a lot to remember. Located in the Dębica district, it is the oldest town in the Sub-Carpathian region and was first mentioned as early as in the 12th century. However long Brzostek’s history may be, its Jewish chapter does not start until the first half of the 19th century, when the first Jewish settlers came to the town. They founded the Kehilla in the 1850s. They had their cemetery, mikveh and a cheder. The wooden synagogue was replaced with a brick temple in early 20th century.

Most of the Jewish inhabitants of the village were craftsmen and salesmen, some were farmers, and only a few families were wealthy. There were many shomakers, tailors and butchers, some traded in canvas and haberdashery, and some sold alcoholic beverages. In the 20th century, the local Jews had their own library. Also, a Zionist organization was active, as well as a communist cell, led by Leon Baumfreus. In 1921, the 479 Jews who lived in Brzostek made up almost 37% of the town’s population, and 7 out of 24 members of the town council were Jewish.

In 1941, during the German occupation, a ghetto was established in Brzostek. First, Jews were robbed of their belongings, then forced to work and finally imprisoned in the area of just a few blocks. Some managed to escape to the Soviet Union, and later joined the Tadeusz Kościuszko Infantry Division.

Only 80 out of ca. 500 Jewish inhabitants of Brzostek survived the war.

Those who were not killed before the liquidation of the ghetto in 1942, were taken to Kołaczyce, 13 kilometers south of Brzostek on August 12 of that year, and later to the Podzamcze forest, where they were executed on the very same day. Some were shot in the Brzostek Jewish cemetery, others in the Szebnie and Pustkowie camps. Their graves are in the woods around Jaworze, Krajowice near Kołaczyce, and in Zawadka Brzostecka. The list goes on.

During the workshops, students discussed in groups, learned to cooperate, shared their experience, and then planned the activities that would finalize the project. While preparing the final walking tour for the local inhabitants, they exchanged press articles, conducted interviews and shared their newly acquired knowledge. They looked for names and addresses of the Jews who lived in Brzostek before the war. They tried to find out about their professions, learned about the history of the former synagogue building, the no longer existing mikveh and the Brzostek Jewish cemetery. Students also met with professor Jonathan Webber, a Jew whose grandfather was from Brzostek. Webber is engaged in local activities aimed at preserving the memory of the Jewish history of Brzostek and happened to be visiting the town with a group of 30 Canadian students.

One day after the meeting, on May 20, 2016, the students and their guests – local residents, representatives of the school and class council – gathered at 10 a.m. at the Brzostek junior high school. Three girls welcomed the guests, told them about the School of Dialogue and briefly recounted the history of Brzostek Jews. The students were elegantly dressed, equipped with microphones and spoke in confident voices. After the introduction, they invited the group to go farther. 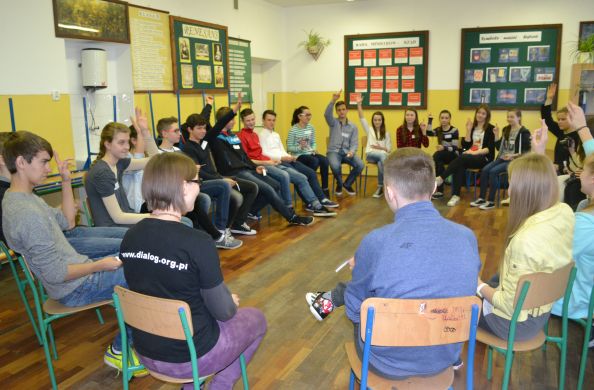 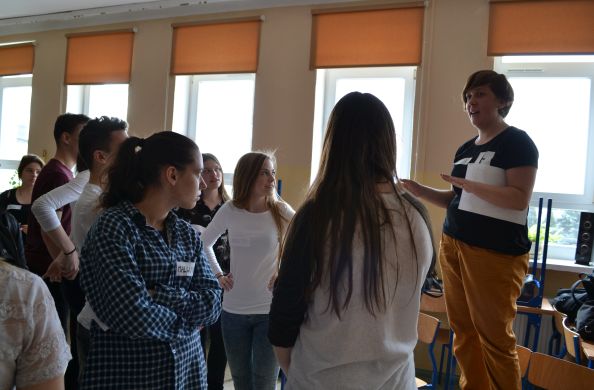 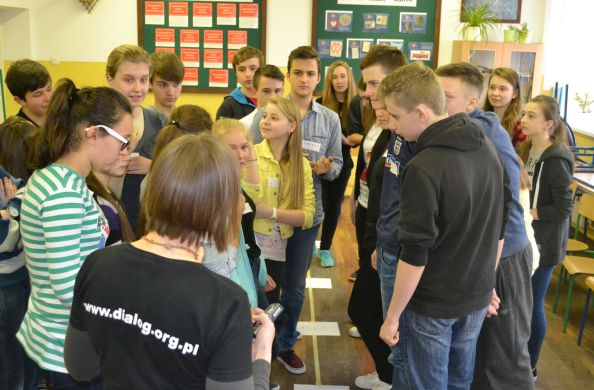 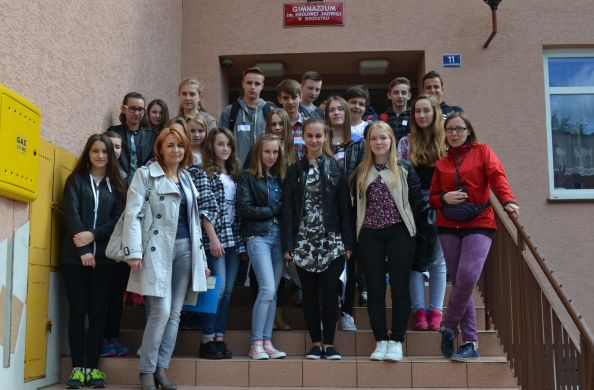 When they passed Mysłowskiego Street, Ola asked the participants to imagine the life on this street before the war. She talked about wooden Jewish houses that are no longer there. About Horowitz and Grabkiewicz families who had their houses on this street. Chaim Horowitz was a fabric merchant, and his wife was Schindla, née Klotz. On the market square, going from Mysłowskiego Street, there used to be the house of the Blum family and right next to it, the house of the Oling family – a shop stands there instead. When they moved to the corner of the market square and Mysłowskiego Street, Ania told the guests about Reich’s haberdashery, located in the place of the present-day rehabilitation center. Ms. Kalina’s gardening and farming store now stands where Konigsdorf used to sell beer and had his soda water bottling shop and ice cream stand. Right behind that building, there was Schuss’ hardware store, next to the tobacconist’s. A couple of blocks further, Oliwka showed a building where before the war there used to be Speber’s butcher shop. Oliwka explained the rules of kosher, which food is considered kosher by religious Jews, and what products cannot be used together. Near by, before the war stood a long building with a spacious vestibule; it was home to the Szwarc family and the Rubel sisters. Szwarc also had a shop there, and sold straw, hay, grains, potatoes and flour. The building of the kindergarten once belonged to Mr. Licht, shop assistant in Karp’s mercer’s shop. One of the elderly inhabitants of Brzostek remembers that one could buy fabrics for shoes there and that the atmosphere was always very pleasant. The basement of the present-day Marino drugstore was the home of the Malz family – Malz had a bakery close to the synagogue, on the site of what is now a garden, adjoining the back wall of the Municipal Office. The students walked on and told a story after story. By the Brzostek cake shop, they offered donuts to the guests, as Ola explained, it was one of the treats for the Jewish community.

After the donuts, Ania took the group to the present-day photography studio, where Finder’s metal workshop used to be before the war. The second floor of the Municipality Office building used to house Mahler’s apartments and solicitor’s office.

Mahler offered legal advice to the inhabitants of Brzostek. On that same building there is a commemorative plaque in honor of the local Jews killed during the war. Going downwards from the Municipal Office one may imagine the one-story brick building that used to stand there – the mikveh. Martyna explained what a mikveh is and when religious Jews use it. Later, Paulina showed the former synagogue building. Built in the early 20th century, it was destroyed by the Germans during the World War II. Afterwards, in the 1960s, the building was rebuilt and refurbished. Then it housed a school and after that – the vocational school dormitory.

What is a synagogue, what is Shabbat and when does it start – does anyone know? The cheder (Jewish school) used to be situated opposite the synagogue. Who learned there and at what age did they start? What is Bar Mitzvah, what follows it, what is the Yeshiva?

At the last stop of the walking tour, the Jewish cemetery, Sylwia recounted the graveyard’s history. What happened there during the war, who was murdered there, what happened to it after the war? Founded in the mid-19th century and destroyed in wartime, the Jewish cemetery is located north of Brzostek. After the war its fence was dismantled, the matzevot were stolen, the area was partially built upon and partially earmarked for farming grounds. In 2009, the part of the graveyard still not built over was successfully fenced, the matzevot recovered in the city were returned and a monument was erected in honor of the Brzostek Jews. Ola encouraged the guests to grab a pebble and place it on a matzevah.

The elderly inhabitants of Brzostek who participated in the walking tour were unanimous: “We heard many things we did not know about.” Apart from the walking tour, the students also organized a small exhibition of photographs of pre-war Brzostek, with Jews standing in front of their homes and modest shops.

Thanks to these sessions, my attitudes have changed.

I learned how to work in a group, I grew closer with my classmates, I expanded my knowledge about the history of Brzostek Jews and I changed my attitudes – which was quite a challenge.

Now I am proud that I live in Brzostek, which once had been a Jewish town.