Sometimes one does not know one’s neighbors well. Things might be different in the countryside where if you sneeze, you hear “Bless you” coming from the other end of the village. But in the city? You do not even know who lives next door. The students from Buk, however, know the names and professions of the town’s pre-war inhabitants. “Izaak Nachman and Jakub Golland were deputy rabbis, Golland and Rubinstein were bootmakers, Prybacz and Rafeł ran textiles shops, Nelke sold protective clothing, Falk was a merchant, Zelmanowicz and Pander had a porcelain wholesale warehouse and a retail shop. Paula Back purchased leather, Mr. Bryc devoted his time to religious studies” – enumerate the students of Buk junior high school, who participated in School of Dialogue workshops.

“Thanks to organizing the walking tour I gained in-depth knowledge of the history of my town and its inhabitants. I learned about specific people who lived in Buk, about buildings which are still here and used to be occupied by Jews”, says Kasia, one workshop participant.

Jews first appeared in Buk in 1793, when the town became a part of the Prussian Partition and the de non tolerantis Judeis privilege ceased to apply. A Jewish Kahal was formed at the turn of the 19th century, a synagogue was built and a cemetery was established. A Chevra Kadisha Gomle Chasidim funeral society was founded in 1820. It was also probably then that a Jewish school was established. In 1848 the synagogue was destroyed, but sixty years later, in 1894, a new building was erected and it has survived until today. At the beginning of the 20th century, the Jewish community in Buk dwindled and just before the outbreak of the Second World War there were no more than 30 Jews living there. In November 1939, a transit camp was established in Buk, to accommodate 1300 Jews from Greater Poland (Wielkopolska, region of Poland) who were later deported to the General Government. The synagogue served then as a woodworking shop and after the war it housed a sports club. In 1988, it was renovated and the area of the cemetery, which had been destroyed during the war, was rearranged. The building of the Talmud Torah and several Jewish houses have been preserved until today. 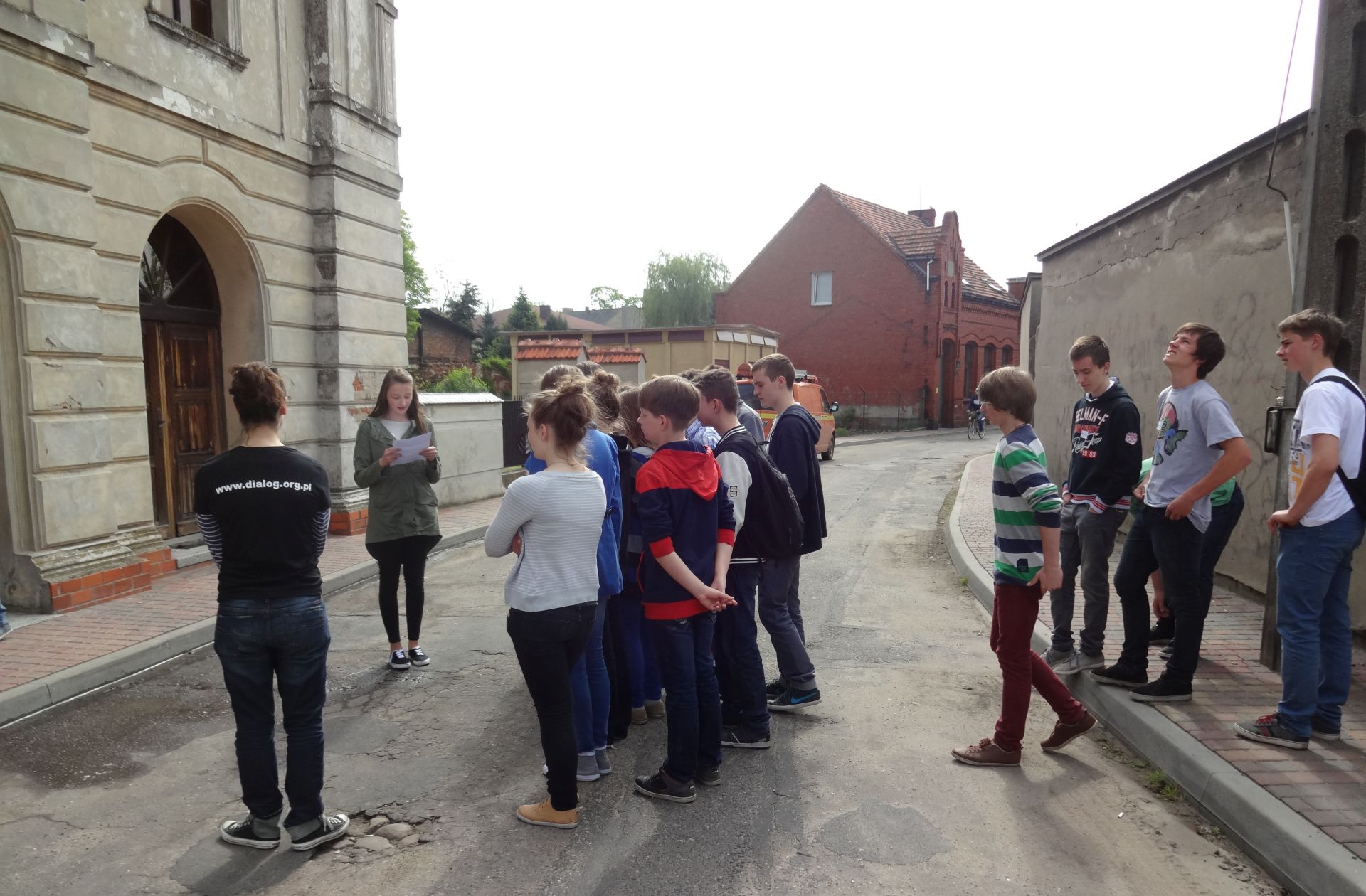 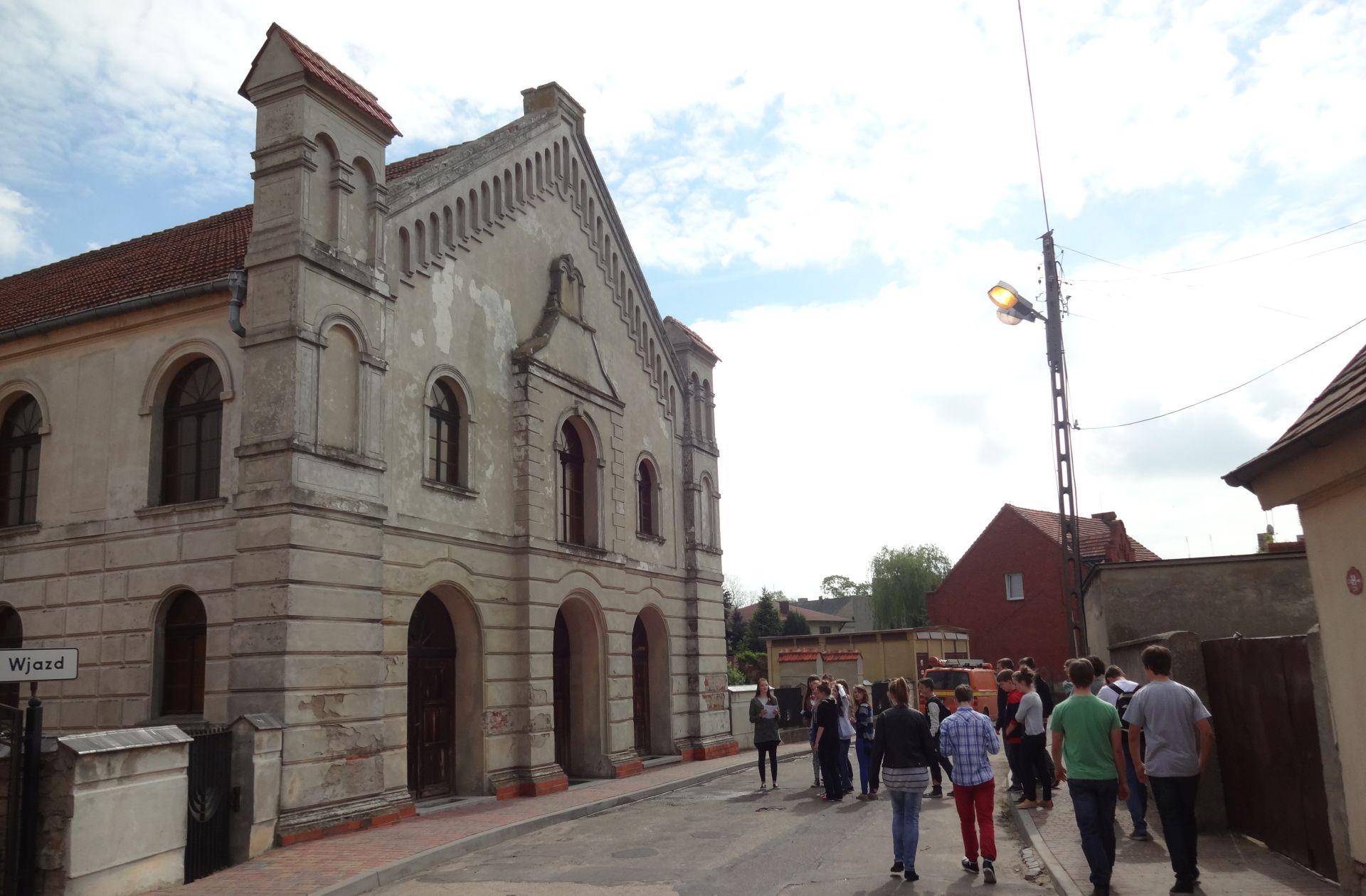 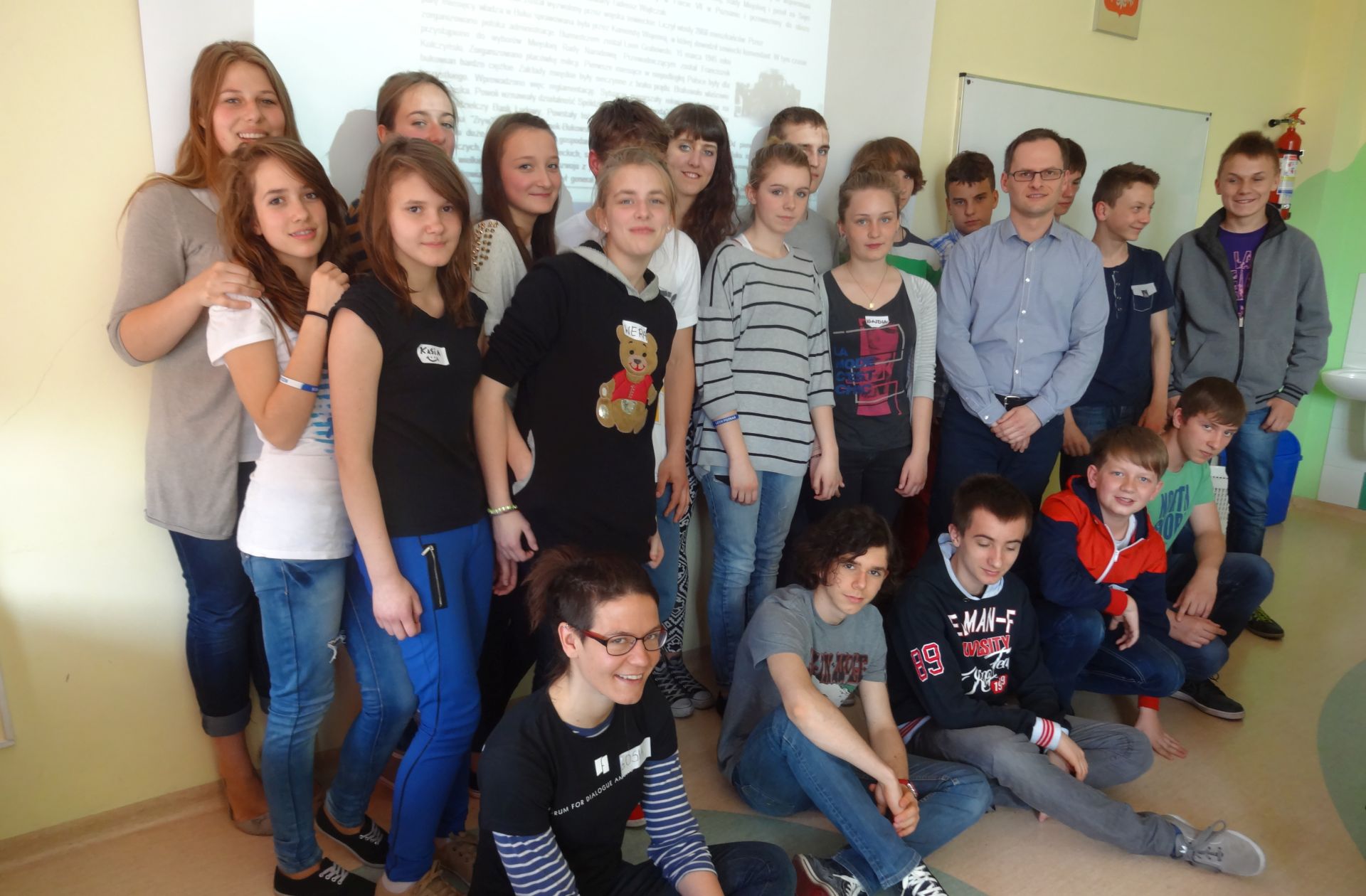 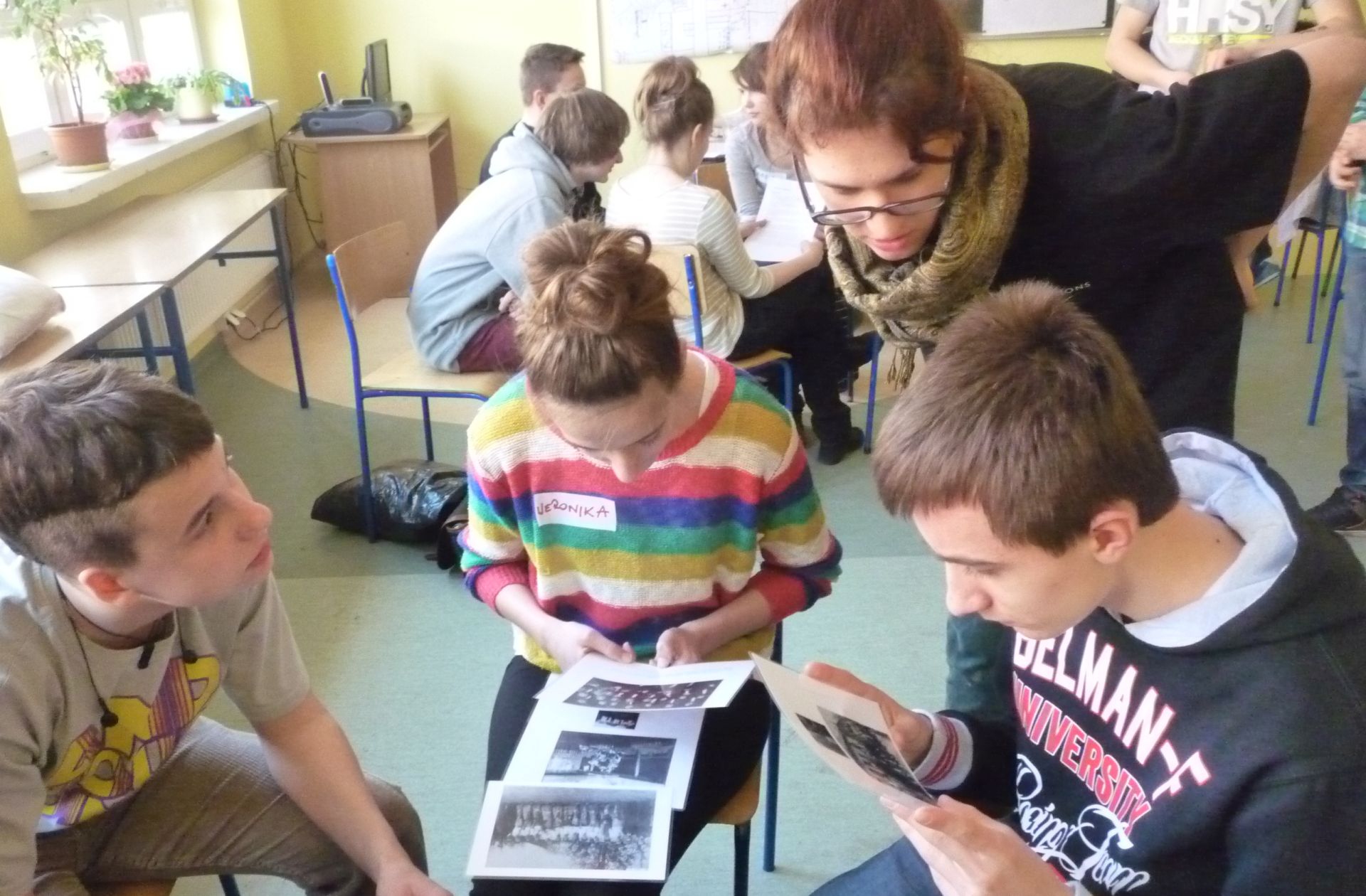 Mr. Hubert Wejman, an employee of the promotion department of the county office and guest of the last School of Dialogue workshop, helped students determine the location of some of the buildings which belonged to Jews before the war. Afterwards, the students organized an exhibition “Buk then and now” where they put together present-day and archival photographs of the town. There is the town square – the black-and-white cobbled one, with a group of children curious about the camera lens, and the colorful one, paved with asphalt, with a park in the middle. There is Poznańska street: with horse carts and a woman wearing a long skirt and an apron in the foreground, and now – with parked cars and a butcher’s shop on the corner. There is the Jewish store “Skład bławatów” [“Textile shop”] and a present-day shoe shop. The synagogue and the Jewish school have remained virtually unchanged – only the plaster on the synagogue has gone gray and is coming off the walls in several places, but the buildings are easily recognizable.

“In late April we visited the Jewish cemetery, located 1 mile outside the town, in order to see how well the graves were preserved and to take photographs for the exhibition. Unfortunately, the graveyard was overgrown and littered, and the matzevot were destroyed. We were able to decipher only one, with a German inscription” – the students say.
On April 6 the students, their parents, teachers, as well as the school principal and the local inhabitants came to the Buk town square, where their walking tour of pre-war Buk would begin. It covered the synagogue, the Talmudic school and several pre-war houses. The students shared their knowledge about Jewish settlement and told the story of Samuel Gordon, writer and the most famous Jewish resident of Buk. The tour concluded in the school building, where the guests could see the photographs of the cemetery and a multimedia presentation about their pre-war Jewish neighbors, the most important Jewish holidays and the general facts about the Holocaust. There were also refreshments – homemade challahs and cenci. “I think that if it were not for this project, I would know much less about the history of the Buk Jews”, says Kasia, one of the participants, after completing he project.

Thanks to organizing the project I gained knowledge of the history of my town and its inhabitants. I learned about specific people who lived in Buk, about buildings which are still there and used to be occupied by Jews. I deepened my knowledge about the Buk synagogue and had the opportunity to visit the Jewish cemetery.

I think that if it were not for this project, I would know much less about the history of the Buk Jews, because I would not have done any research on my own.

We have learned a lot about the history of the Buk Jews. I have always wanted to see the interior of the synagogue and now I saw it!

What I liked most about the School of Dialogue was working together on the project, when we completed our assignments in the group.