School of Dialogue at Stefan Żeromski High School No 2

Smolenia Street at the very heart of Bytom. On one of the town houses, there is the star of David. Plaster is falling off the building, but the star can be very well seen as it was made of bricks embedded in concrete. There are remains of mikveh in the basement. Tap water was cut off, but the stove is still there. The floor was made with white and blue tiles. Hardly anybody in Bytom knows about these traces of the Jewish community. Who would go through basements and courtyards, or carefully examine facades?
In the past, Jews constituted from a few to a few dozen or so percentage of the town population. They lived there from the 14th century, while in the 18th century they established their own Jewish Community. At the beginning of the 19th century, they built a synagogue. The town housed Jewish schools, a library, Jewish charity organizations.

There are many headstones still preserved at the cemetery in Piekarska Street. The unusual thing about the headstones is that they showcase photographs and inscriptions in German; one may only assume that the Jewish population in Bytom was strongly assimilated. In 1938, when the town was still German, the synagogue was burned down, approximately 70 Jewish shops were devastated and 370 Jews were arrested during the Kristallnacht in Bytom. In 1939, there were still 1362 Jews. In February 1942, some of them were in the first Jewish transport to Auschwitz, where all of them died in a gas chamber. But after the war ended, there were many Jews living in Bytom, as in 1945 Jews returning from the USSR settled here. This wave was stopped for a while by the Kielce Pogrom, but later, until 1968, one may observe a truly vivid centre of the Jewish religious and cultural life in the area. 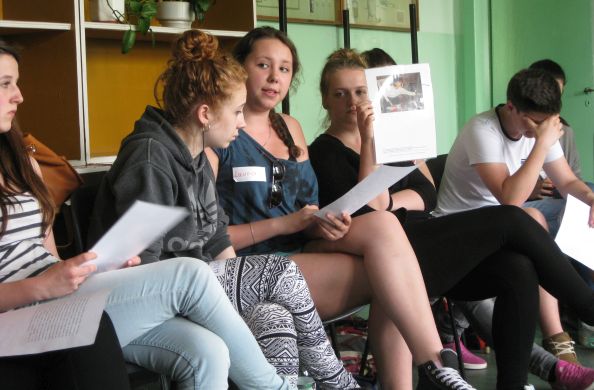 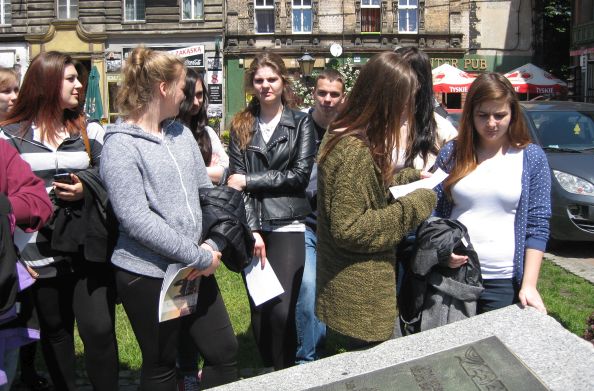 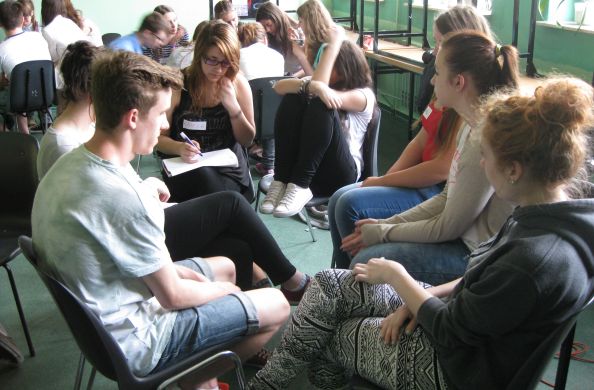 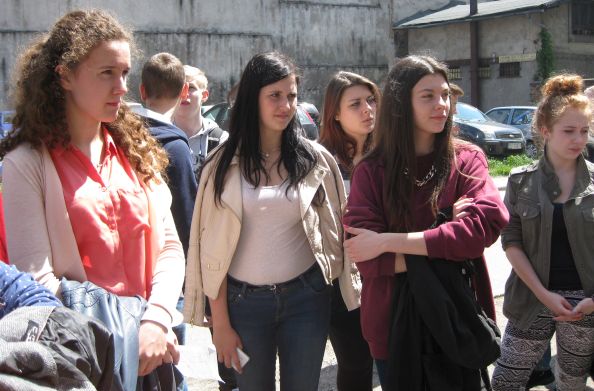 The workshops organized by the School of Dialogue proved to be an opportunity to bring all these issues closer to young people in Bytom. During that time, they could talk about Jewish culture, their contribution to the development of the country, about what is left and what we can remember. We as the society: Poles, Silesian and citizens of Bytom. During the workshops, students were mostly interested in the issue of their town’s identity, and the region of Silesia, to a greater extent, as well as the German and Jewish contribution in creating that identity. They became more and more interested in the history of Jews of Bytom. “It was interesting to watch old photographs depicting the places which were important not only to Jews, but often of significance to the town history”, said one of the workshops participants. They decided to share what they learned.

They invited their fellow students from the high school, parents and teachers to participate in the tour “Following the Footsteps of Jews of Bytom”. The first point of the tour was the new, still functioning  cemetery in Piekarska Street, with a neo-Gothic funeral house and the monument of Dutch Jews transported to Silesia as forced labor. They also took the tour participants to the place where the ‘old’ Jewish cemetery once was and showed a commemorating board there. They also saw Grunwaldzki Square where a synagogue and a house in which a prayer room with the Torah operated until recently. The tour participants were taken to the former Jewish home for the elderly with a mikveh, in Smolenia Street. “Bytom is a beautiful town with a long history which it greatly owes to Jewish people”, Natalia, one of the School of Dialogue participants, said after the workshops.

This adventure may seem something too difficult or unnecessary. Think about the fact that maybe in one hundred years someone may, just like you today, bend over small and big things which once were important to you.

In my opinion, the biggest success is not the knowledge that one may acquire, but a change of attitude to different religions, races, people. I have started to think whether my prejudice is reasonable or whether it is grounded on negligence.

It was interesting to watch old photographs depicting the places which were important not only to Jews, but often significant to the town history.