School of Dialogue at School Complex No 2

Chęciny is a town located close to Kielce, famous for its fortified castle on a hill. Two kilometres away from the castle, inside the building of the School Complex no. 2 in Chęciny, first year  students of the vocational school are participating in the School of Dialogue workshops. They are learning about Jewish culture and the history of their town. After the workshops, Chęciny will never look the same to them. The buildings will turn out to hold unknown stories, and the town’s architecture, dominated by the castle and St Bartholomew’s church, will have new tales to tell. For the time being, however, the local history and the history of their families are completely unknown to them, because they don’t even know what their grandparents did in their lives.

During the workshops the students learn that before the war 60% of the town’s population was Jewish. They lived primarily in Długa Street, which was also called Jewish Street. At number 21 there was a synagogue that was turned into the “Marmur” cinema after the war. At the start of Długa Street there is a surviving mikveh building that nowadays is unused and empty. There is also a Jewish cemetery, located on a hill in the western section of the town. Supposedly there are some doorframes in town bearing the marks of mezuzot, perhaps we’ll manage to find them, the excited students think shyly. 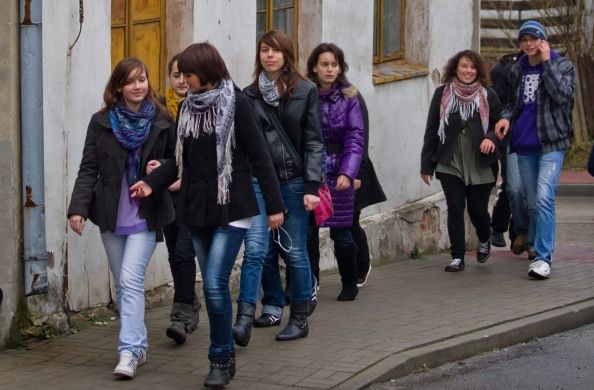 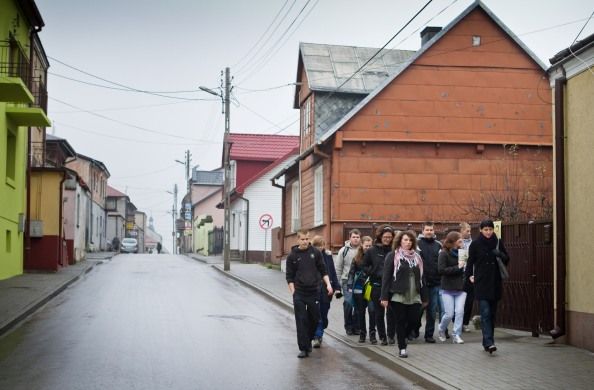 As they make progress during the workshops, the pre-war Jewish town starts taking shape, it is slowly becoming easier to imagine Chęciny Jewish inhabitants: cobblers, bakers, butchers, salt merchants; Rosental, Ruchla, Cukierman; soda water producers, owners of distilleries, watchmaker and tailoring workshops, as well as hairdressers.
On 27 November the workshop participants invite their senior colleagues to a tour following the footsteps of Chęciny Jews. It is the end of November so the ground is covered by a thin layer of snow, it is cold but sunny. At 9 AM sharp the group departs from the school. The first stop along the stroll’s itinerary is the old mikveh. The group stops by a white, single storey building with large wooden windows and pitched roof. Justyna, one of the students, tells everyone what the mikveh was used for and recalls the building’s first owner – Szlama Rayzman.

Next, the students go to the old synagogue building, which now houses the Communal Culture Centre. The history of this place of prayer is told by Adam. After him Kasia speaks up. She points to the rabbi’s house from the turn of the 19th and 20th centuries that stands right next to the synagogue. Now, the students have to take a longer walk to reach the Jewish cemetery. Approximately 100 gravestones have survived to this day. Participants of the School of Dialogue programme explain the symbols found on the matzevas to their colleagues, pointing to the Hebrew inscriptions. At the next stop Violetta points to the premises of the ghetto; you can see the students sinking into meditation. Everyone returns to the school, cold, but enriched with this lesson of local history and memory, proud that they could share their knowledge with others.

School of Dialogue program in Chęciny was made possible by the support from PATTY and LOUIS BECK.