Czerwińsk nad Wisłą is a small town with rich history. This town is located 63 km from Warsaw, just before Płońsk. You can stop here and visit Romanesque temple from the 13th century with frescos still visible, the golden altar and the enormous gates. And the pre-war residential houses, on which you may still notice the marks of mezuzahs.

Jews began to settle in Czerwińsk only by the end of the 18th century. They lived in the south east part of the town, where now Queen Jadwiga school stands. Czerwińsk had a synagogue, a house of prayer and a cemetery where now a housing estate is located.

In 1939, 1720 of town residents were Jews. Later, they began to flee. Those who stayed in Czerwińsk, were put in the ghetto. These were Jews from Czerwińsk and the surroundings. Later, those from Wyszogród and Warsaw came. Deportations to Nowy Dwór starter later and the epidemic of typhoid fever erupted. The ghetto was liquidated in October 1942. Jews were transported further to Auschwitz. Some managed to run away from the transport and came back, some found death here. Just like the Glicksman family who was hiding at the Catholic cemetery in one of the tombs. After a while, they were found, maybe someone had even denounced them, and murdered. Their daughter, Marysia Glickman, who at that time was 5 years old, was saved by Henryk Gortat.
Some were hiding among the partisans and managed to make it, and some did not.

As students from high school in Czerwińsk say, one who revives the memory, revives the dead, and with it, develops one’s humanity.

When talking about the dead, one emerges them from oblivion. They regain a form and a place. A space to come into being. And on June 10, 2013, as a result of hard work in the course of the School of Dialogue program, the students, having all that in mind, organized a walking tour for high school students, for junior high students, for Gortat brothers – former borough leaders, and sons of Henryk Gortat. For the Promotion Department of the local government, represented by Marcin Wojtkowski, for Maria Ziemnkiewicz, head of the Foundation for Development of Czerwińsk, and for Mateusz Odoliński, local historian, a high school graduate. And for those who wanted to join them.

At the beginning of the tour, the participants in the Forum for Dialogue program, introduced the guests to the goal of their action, they shared their knowledge acquired during workshops, what they had learned about Jewish culture and cuisine, about Jewish history and customs. They explained what Forum for Dialogue is, what it stands for, what it wants to achieve. They showed old, pre-war photographs and those taken during the war. They showed a presentation about places which are the most significant for the Jewish history of Czerwińsk. They indicated on the map what the route would look like and presented information about the relevant stops. They started at 10 a.m. At the Annunciation of the Blessed Virgin Mary Basilica, Dawid and Natalia briefly told the group about the history of the church, the monastery and the town. About how Jews contributed to the development of the town and how many they were. 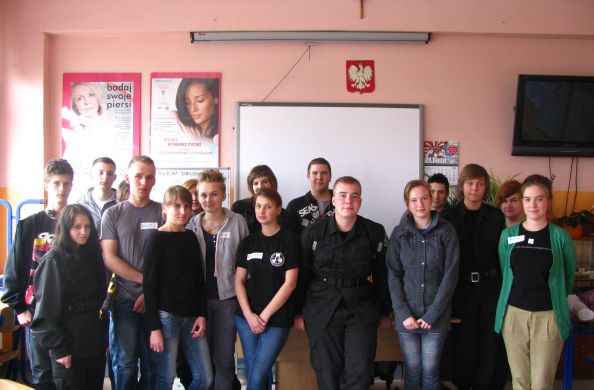 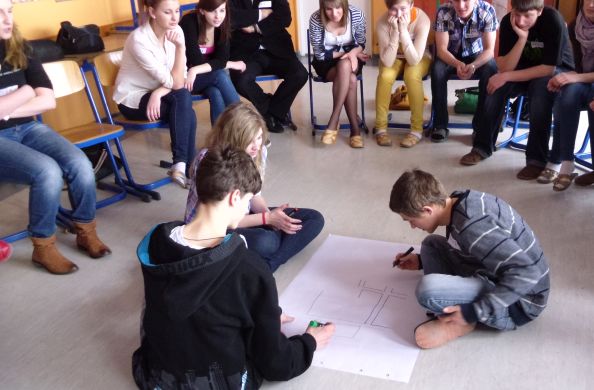 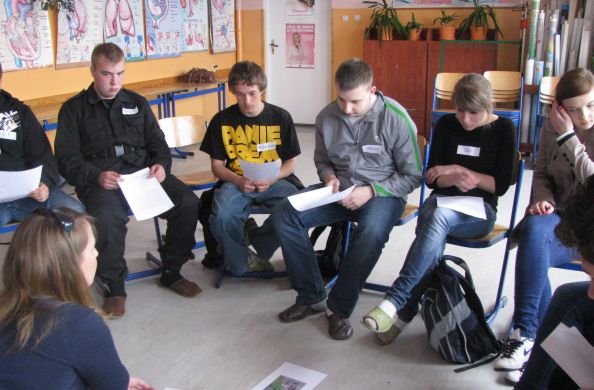 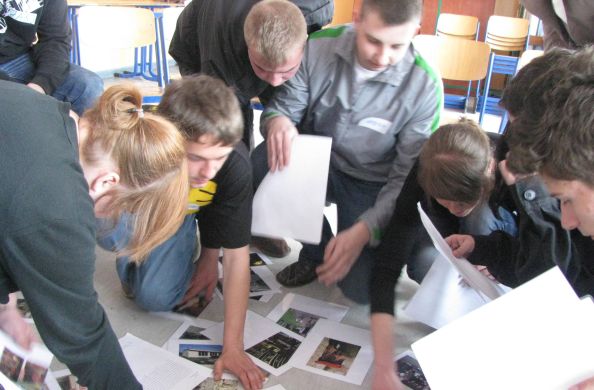 And that the Basilica boasts a Medal of the Righteous awarded to Henryk Gortat. Then, from Jasna Góra Czerwińska the group went down to Klasztorna Street that leads to the old port in Czerwińsk. Here, Ewelina and Monika showed everyone the wooden houses from the 19th century, with Jewish rosettas still in place.

At rectangular market square, Wojtek and Milena presented pre-war photographs. Not that much changed. The buildings are the same, but the Jews are absent. A neo-gothic residential house with a balcony with iron balustrade still stands. Once this building belonged to Najberger who owned a sawmill in Wychodziec and a brickyard in Mochty. The wood from that mill served as a building material for the palace in Miączyn, erected in 1924. In 1939, Najbert did not leave Czerwińsk, although he could have and many wanted to persuade him to do so. He shared the fate of others.

Behind the eastern frontage of the market square, there is another square where a concrete floor and remnants of foundations can be found. A synagogue used to stand here. Karolina and Kinga told its story, Mrs. Maria Ziemkiewicz and Mateusz Odolinski added more. During the war, it served as a storehouse, after the war potassium salt was kept there. In the 90’ the building was pulled down.

When walking a paved road down south from the synagogue, they arrived to the stairs leading to Vistula river. A mikveh used to stand here, now at the waterside only wicker grows. It was here that Wojtek explained what mikveh was and is, how it looks like, and how looked the one that is not longer here.

At the Catholic cemetery, the Gortat brothers told the story of Glicksman family who had been hiding in the Charzyński family tomb. Then, walking back through the market square and Świętokrzyska Street, the group went in the direction of the cemetery hill overlooking the houses that once constituted the ghetto between Kościelna and Świętokrzyska Streets and the church hill. Cmentarna Street that goes from the cemetery at one point joins Polna Street. This is where the ritual slaughterhouse was located before the war, locals would call it “szluchta”. Mrs. Ziemkiewicz and Gortat brothers told everyone that the butchery building with a metal roof still stood in place after the war. Here, Patryk, one of the boys, explained what a butchery was, what kosherness is and what its rules are. When walking down south from Cmentarna Street, they arrived at the old Jewish cemetery. It’s capacity was full by the end of the 18th century, and the place for a new cemetery was outlined around 1 km from the town center, behind a ditch called “farny”. To arrive there you have to walk east from Polna Street. There is a hill overlooking Vistula river and Czerwińsk with all the Basilica towers. It was Rafał who told about the cemetery and the last Jews of Czerwińsk that were buried here.

When they arrived at school, students and guests, young people and adults, sat together for a few minutes or even more to ponder upon and talk about Jews from Czerwińsk and about Czerwińsk without Jews. Sitting as mourners at a funeral reception, they recalled and talked. They tried to imagine what it would have been like if history had taken a different turn, what would have been here, who they would have been.

The School of Dialogue workshops made me understand that every culture is interesting but you must want to learn about it. (…) I hope that one day I will be able to share the acquired knowledge with a person looking for his/her roots.

The School of Dialogue workshops opened my eyes to the fact that what I mostly thought about Jews up till now, was just stereotypical.

There are many places here in Czerwińsk that once belonged to Jews, I had no idea about it. There is for example a place where a Jewish cemetery was located. There is no trace now but there is memory. I am disappointed with the attitude of local government regarding this place, that they did not commemorate it in any way, they led that place overgrow with grass.

These workshops introduced me to culture and history of the Jewish community of my town, I had heard about it but I hardly knew anything. I learned where the synagogue, the cemetery, the ghetto used to be, I learned that Jews are normal people who were our neighbors not so long ago. Sadly, World War II changed everything.