The sky on this warm June day is rather cloudy. At the market square in Działoszyn, there are displayed several easels with the pre-war photographs of the town. A group of high-school girls wearing identical T-shirts welcomes the school principal, a teacher from a nearby town – Pajęczna, the director of the Regional Cultural Center and the gathered town residents. Today, the students are taking on the role of guides and teachers. They learned so much during the School of Dialogue workshops and now they want to share their knowledge with others.

Monika is the first one to present. She talks about the town’s history and its Jewish residents. How Jews lived in the surrounding areas already in the 16th century and how two centuries later they made up the majority of town’s total population (65%).

How they traded in wool and salt, how here, in Działoszyn, they manufactured precious objects of religious worship, how they ran restaurants and tailor’s workshops. How there were three Jewish bakeries at the old market square, a soda water factory and a Jewish Cooperative Bank. She points at the old black and white photography of the market square to show everyone how it looked a century before. The town was almost totally destroyed during the bombings of the September Campaign of 1939. There is almost no trace of the Jewish residents of Działoszyn – only a few buildings near the market square. Everyone can judge for himself how different it looks now in comparison to the old photograph. 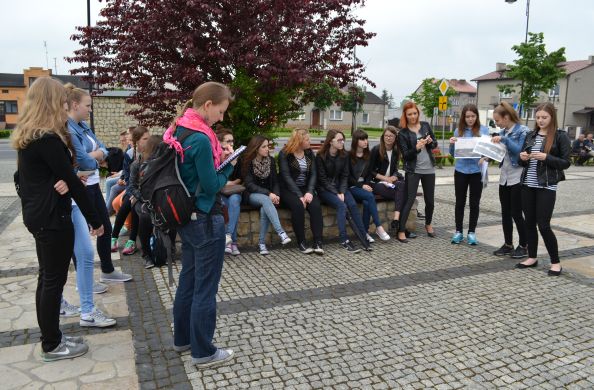 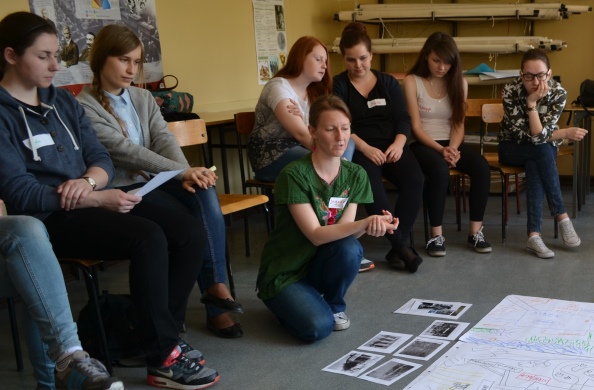 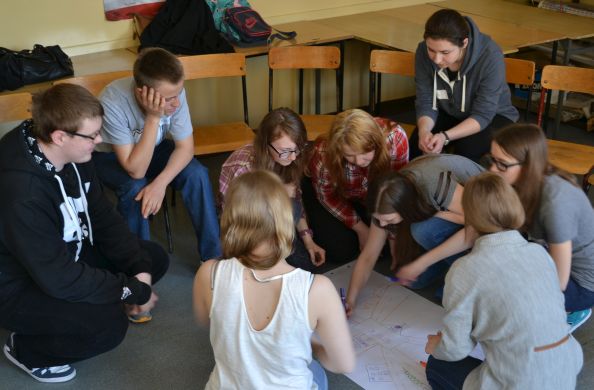 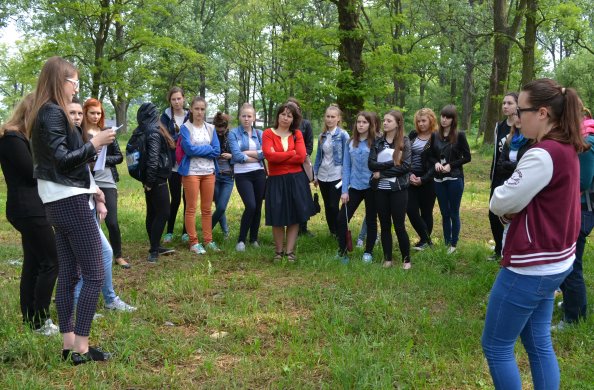 From the market square the walking tour participants go to Podłęczna Street where the synagogue stood. There, they can look at a photograph of the building, hear about Judaism and Jewish holidays. Later on, at the so-called small hill – an old Jewish cemetery, Daria and Patrycja tell them about Jewish burial customs and the walking tour participants place the symbolic stones. At Zamkowa street the girls talk about Jewish schools and show to the participants a pre-war photo of a Jewish sewing class. The walking tour ends at Męciński Palace where the students distribute Jewish culinary specialties that they prepared themselves for the gathered town’s residents.

The students worked closely to create the map of their town, to learn about Jewish holidays and customs, or to search information about those who lived here before. “I learned how to work in a team, to express my opinions, but what’s the most important– we organized a walking tour in the footsteps of Jews from Działoszyn”, said one of the participants of the School of Dialogue workshops.

Mrs. Dorota Czuba told the students about her own experience in learning the Jewish culture, about her visit to Israel, and the fate of her grandfather who was sent to Auschwitz for hiding Jews. The high school students were very moved by these stories which motivated them to organize the walking tour retracing the Jewish citizens of Działoszyn. They gave it a title – “Come and learn to understand”. This motto was put on the invitations distributed among the representatives of local authorities and institutions, but also on the posters for the town’s residents informing about the upcoming event. “We walked around the streets so rich in history. We found the place where the synagogue stood, we had no idea about it before, we went to the town’s square, where the market had been organized, and to many other places. This was an amazing experience”, sums up Ola, one of the high school students from Działoszyn.

We walked around the streets so rich in history. We found the place where the synagogue stood, we had no idea about it before, we went to the town’s square, where the market used to be, and many other places. This was an amazing experience.

I have lived near Działoszyn all my life and I have never taken interest in the history of the town. But I have recently changed my point of view. I have learned many interesting facts that truly impressed me. I am proud that I can now pass the knowledge about its history.

After these workshops I became more tolerant towards others. I hope that one day the world will unite and there will be no divisions into Jews and other minorities on the basis of stereotypes.