School of Dialogue at Marcin Kromer High School No 1

Gorlice is located in the Lesser Poland province and has around 30,000 inhabitants. The first Jews settled in the town in the 17th and 18th century. More of them came in the second half of the 19th century with the onset of industrialization. They were involved with trade and oil industry. After the First World War, Jews owned nearly 90% of shops and 30% of craft workshops that operated in the town. In 1924, twenty two Jews were members of the Town Council. Gorlice was also an important Zionist center. In 1939, the number of Jews reached an estimated 4,500-5,000, nearly half of the town’s population. In the middle of October 1941, the Germans set up a ghetto. It was ultimately liquidated in August 1942. It is said that around two hundred Jews from Gorlice survived the war.

There are very few tangible traces still preserved. The building of one of the synagogues was demolished in 2016, and the other one now houses a bakery. There are several hundreds of matzevot in different condition preserved at the Jewish cemetery established in the second half of the 18th century. Many plaques commemorating the Jews of Gorlice were put around the town.

Students showed a lot of involvement and openness already at the first workshop. “The way these workshops are carried out and tasks we had to accomplish helped me to understand many things. I think it triggered my curiosity and a willingness to access information that no one had told me about before”, one of the workshops participant said. The high schoolers rediscovered the history of their town, they became aware of its multicultural history. “I see my town differently, I notice places and symbols which I had not seen before. Because of these workshops, I can now share knowledge and interesting facts,” one of the students emphasized. When preparing for the final walking tour, the students did not only visit the library and searched for information online, but also they talked to the oldest inhabitants of Gorlice. “This project inspired me to discover many books about the history of my town, but above all I reached out to people who still remember those times. I think that without these workshops, I would not have been interested in talking to my grandmother about the history of my town,” one of the workshops participant said. 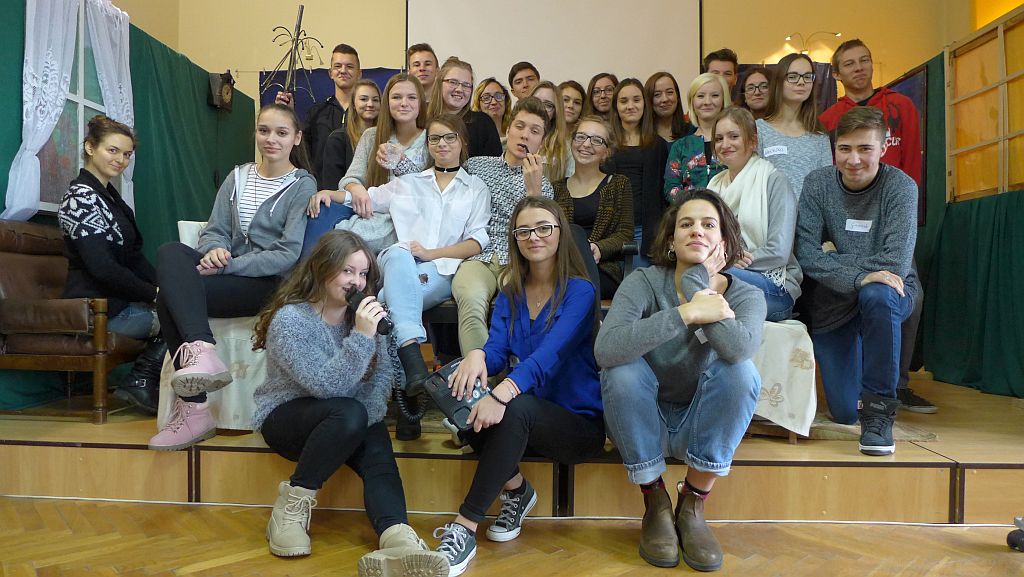 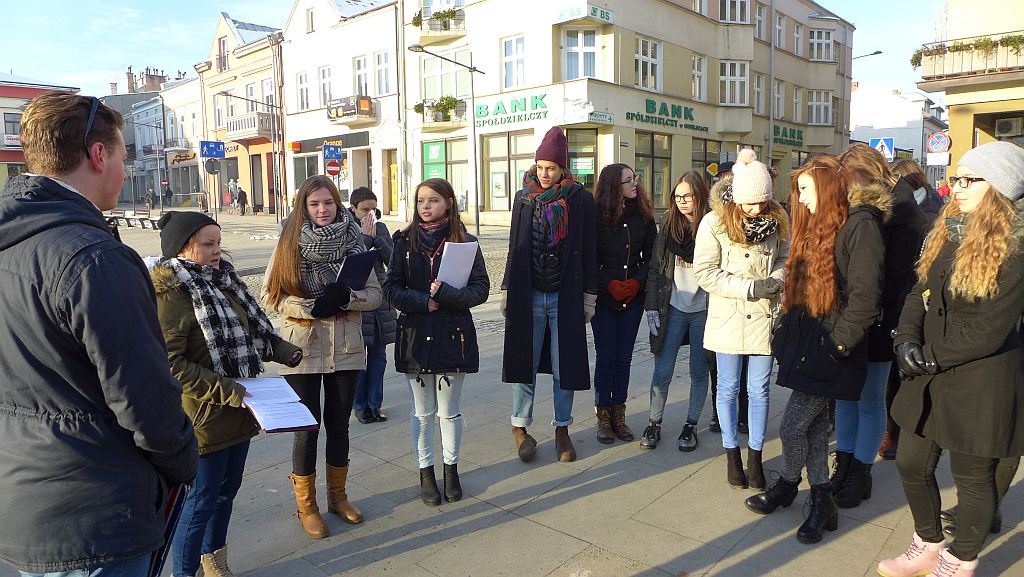 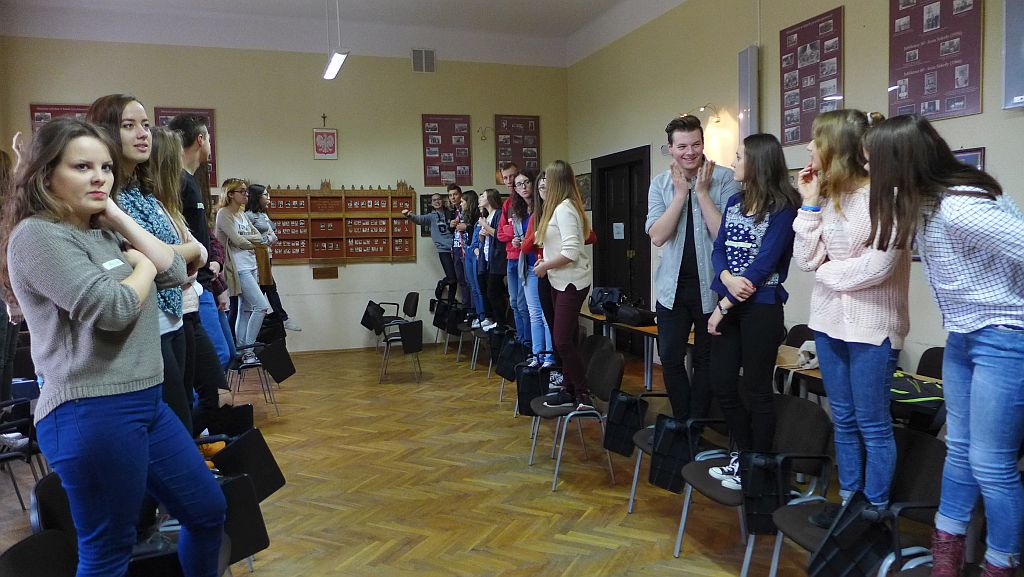 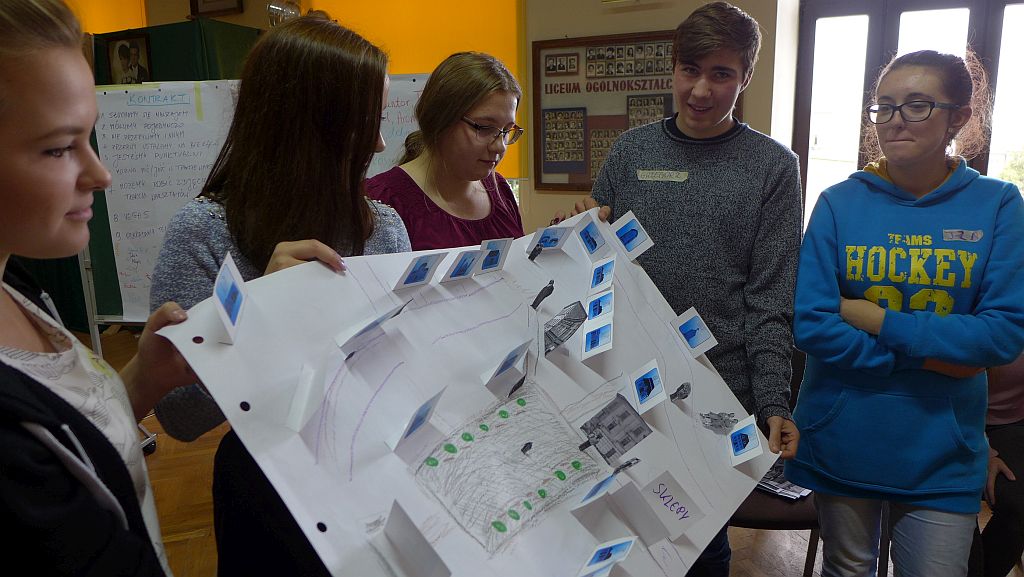 On December 5, the students invited their peers on a walking tour following the footsteps of Jews of Gorlice. They titled it “Forgotten Stars of Gorlice”, as while preparing for the tour, they found images of the Star of David preserved on one balcony of a building. The meeting started at school, the guides explained the project and talked about the School of Dialogue program.

Next, they all went to the market square in Gorlice, where, among other things, they learned when Jews came to the town, how many they were and what their occupation was. At Piekarska Street where the synagogue once stood, the students introduced the participants to Judaism and Jewish cemeteries. At the so-called “Butter Market”, i.e. Dworzysko Square, they talked about the life that once thrived here.

The next stop was the monument commemorating the Holocaust of the Jews of Gorlice. Here, the students learned the fate of the ghetto and listened to the stories told by the witnesses of history. At 3-ego Maja Street, where yeshiva once stood, the students talked about the modern Israel. At the end of the walk, the participants went to school where they could taste Jewish snacks – matza, challah, dates and apples with honey. The guides introduced everyone to Jewish holidays. The participants could check their newly acquired knowledge in a quiz prepared by the project group. The students also made two films – one about the event, and one concluding the project.

As we worked in groups, I was able to get to know my peers better and learn how to work together

I see my town differently, I notice places and symbols which I had not seen before. Because of these workshops, I can now share knowledge and interesting facts.

When preparing for the walking tour that we were organizing as part of the project, we noticed a Star of David on one of the residential buildings located at the market square in Gorlice. I walked the street where the synagogue once stood. I think that the memory about it fades away. I know that I will not forget about it. This experience motivated me to look around and visit the Jewish cemetery which I had never seen before although I live 700 meters from it.

The goal of these workshops is to introduce the history of Jews, and people who participate in the program should pass this knowledge to their peers. That is why we organized a walking tour in Gorlice to raise awareness in the school community about the place we live in and its past.