Despite the fact their town has no recorded Jewish history, students from Kleosin wished to participate in School of Dialogue program. Their town is not far from Białystok, which had been the most important center for Jewish life in Podlasie region. It was Białystok’s multicultural past that junior high students from Kleosin explored in the course of the series of workshops.

Białystok is the capital of Podlaskie voivodeship and has the population of over 296,000. First mentions of local Jews date back to 1658. At the end of the 18th century, Jews comprised around 45% of the city’s residents. With the dawn of the 19th century came a rapid increase in Białystok’s Jewish population, as its area was included in the so-called Pale of Settlement. In 1906, the Russian authorities inspired a pogrom in the city which, according to different sources, led from 82 to 110 Jewish deaths. In 1912, Jews accounted for 75% of Białystok’s residents, which earned the city its nickname as Jerusalem of the North. During World War II, Germans created a ghetto in Białystok, in which they locked Jews from the city and surrounding villages. An uprising broke out, but was brutally squashed. Today, one of the streets in city center bears the name of Icchok Malmed, one of the insurrection’s instigators.

The majority of Białystok’s Jewish residents were murdered by Germans in Treblinka death camp. Ludwik Zamenhof, eye-doctor and creator of Esperanto language, is among the most famous Jews from Białystok.

For most participating students, workshops led by Forum for Dialogue educators were their first encounter with Jewish culture and history. Students were curious to discover the history and meanings behind street names and sites commemorating Białystok’s Jews. “Actually I managed to remember a lot from these sessions. And my opinion has changed, not to mention how much I learned about Białystok. Awesome idea with these workshops” wrote one of the female participants. To learn more about Jews in Białystok, students invited to their school Lucy Lisowska, chairwoman of the Center for Civic Education Poland-Israel (Centrum Edukacji Obywatelskiej Polska-Izrael) who for many years has been working towards preserving Jewish material and cultural heritage in Podlasie region. Additionally, students organized an art exhibition; school corridors became gallery space for drawings presenting Białystok’s synagogues, menorot or the Israeli flag. 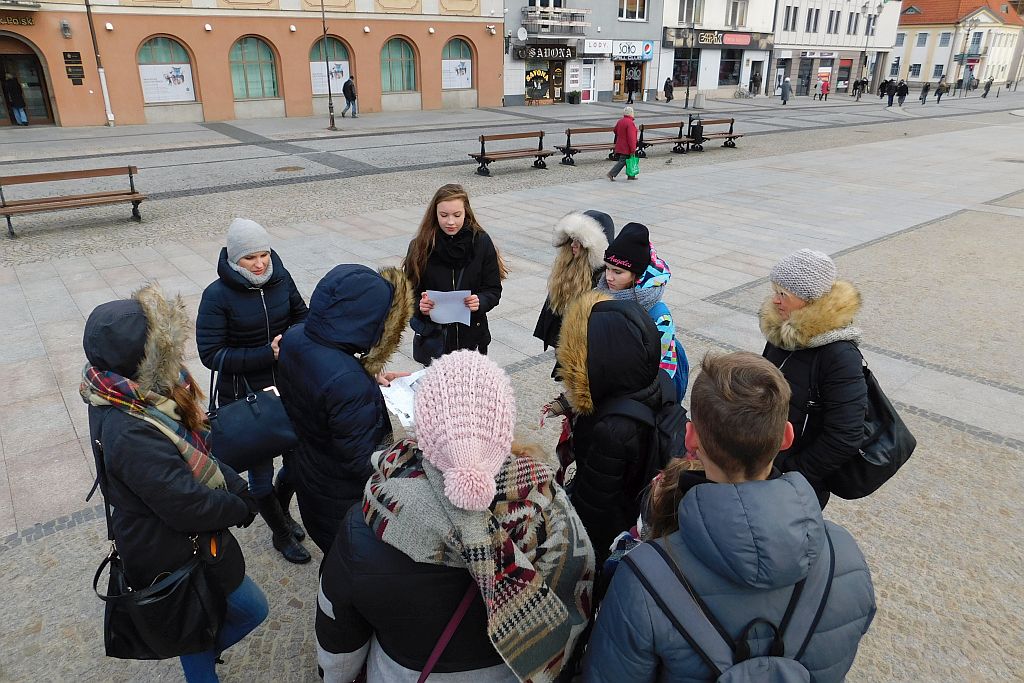 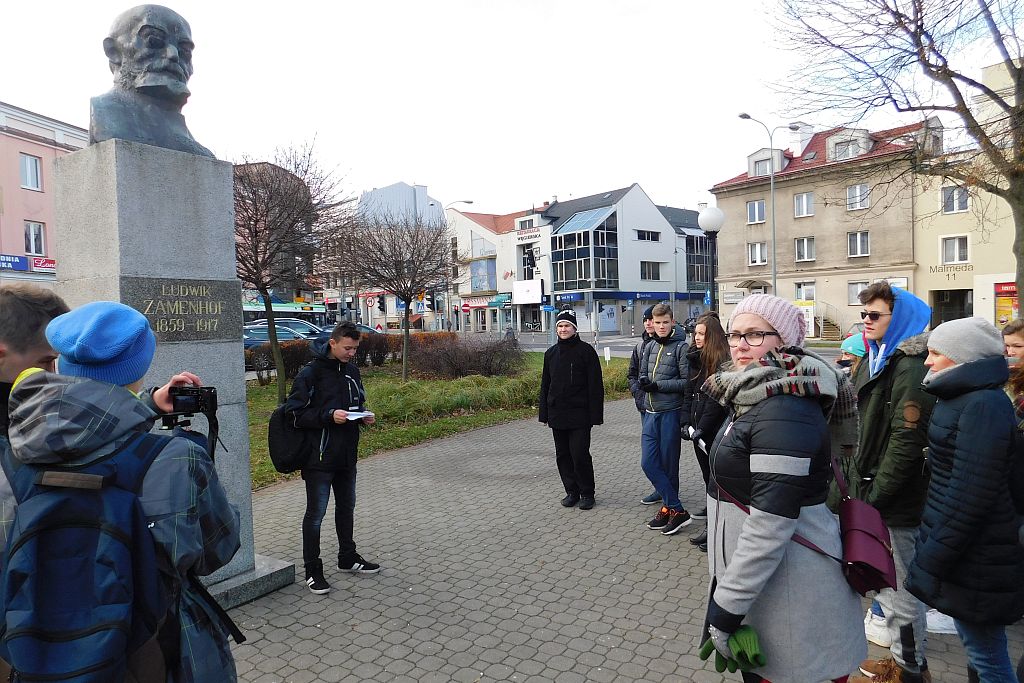 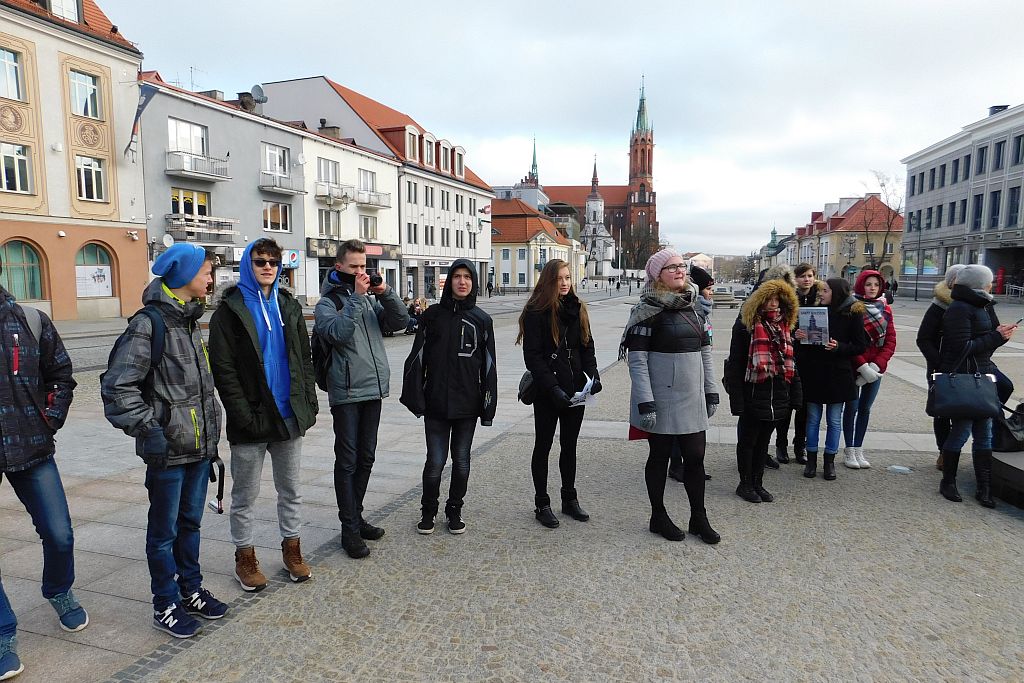 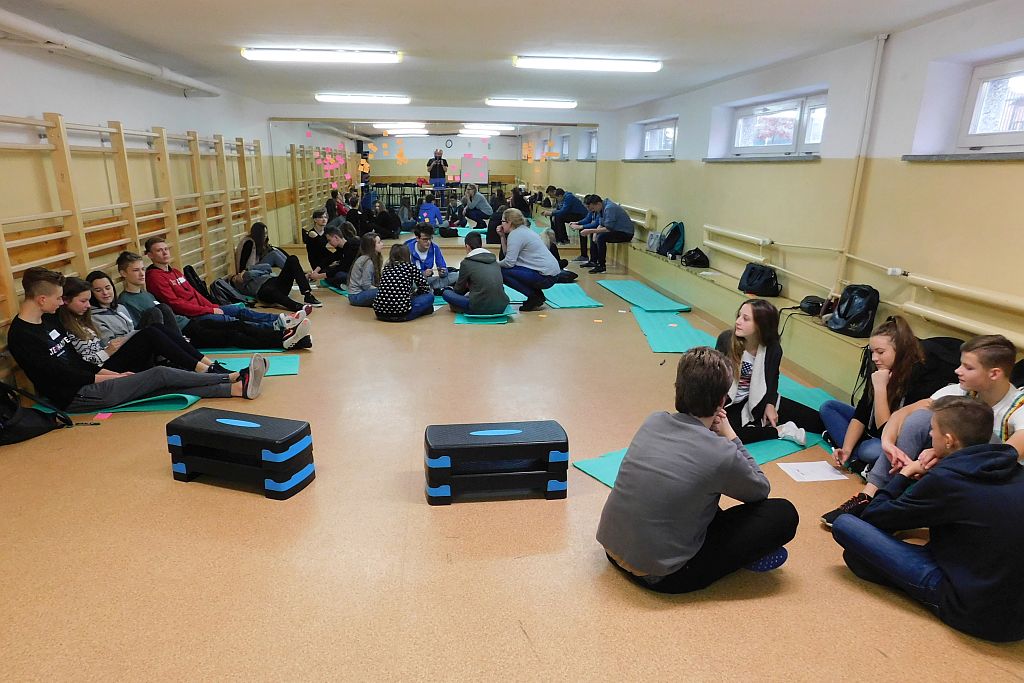 For their final project’s walking tour, students invited the rest of their school as well as their teachers to attend. Tour participants received booklets with the walk’s route and descriptions of the sites marked on the map. Everyone danced to Hava Nagila before heading to Surawska Street to see the monument of the Great Synagogue. The area around it constituted the heart of a Jewish residential district called Schulhof. Guides presented the synagogue’s history and introduced tour participants to most important terms related to Judaism. The next stop was City Hall which never served any administrative purpose and instead had always been a commercial space. Inside, most of the shops, kiosks and stands with clothing, shoes and tools had Jewish owners. Next to Apollo movie theater, students talked about cultural activity of Białystok’s Jews. Their guests also heard the story of Gilarino Miniature Theater, which was established in 1926 by a group of young Jewish artists.

The building of Józef Zeligman School served as backdrop for the story on Jewish education. Tour participants were also introduced to Izaak Zabłudowski, an entrepreneur supplying timber for construction, and learned about Linas Chajlim Charity Society which offered medical assistance to all Białystok residents in need. The next stop for everyone was the site of the family house of Ludwik Zamenhof – an eye doctor and creator of Esperanto. There, tour participants had the task to match words in Esperanto with their Polish translations. For the final part of the tour, the group headed to the former ghetto area, making stops at Icchok Malmed’s commemorative plaque and Ghetto Uprising Heroes Monument. Students prepared lesson scenarios on the history of Jews in Białystok, which over the next few days tour participants were trained to present to the rest of their class. A film and a multimedia presentation were chosen as reporting methods from students’ project work.

Thanks to the walking tour we organized, we saw a big chunk of the city I live in yet I had no idea about these sites connected to our ancestors.

I learned a lot about Jews who had once inhabited Białystok. For example, I had no clue that Malmed was Jewish and that there had been a ghetto in Białystok.

I can say that I now look at Białystok and the world with different eyes. I really liked these workshops.