School of Dialogue at Henryk Sienkiewicz High School No 1

“Memory when once restored stays with us for ages”

This is the motto which ends the film shot by students from Koluszki, made as part of the project commemorating Jews who once lived in their town. The first mentions about Jews in Koluszki date back to the 18th century. In a census carried out in 1921, 387 inhabitants declared a Jewish origin, constituting about 29% of the town’s population. In 1939, there were already 475 Jews. But the students managed to find very interesting witness testimonies. During preparation to the walking tour, they collected a dozen or so interviews rich instories told by town’s oldest residents.

Koluszki was awarded the town privileges in 1949. From the mid-19th century, the Warsaw-Vienna railway runs through Koluszki, and later a branch was built from Koluszki to Łódz. From then on, the town of Koluszki became an important railway transit point. The following development of services and trade stimulated an increase in Jewish settlement. Before the World War II, there was a synagogue in Koluszki-Kolonia that was destroyed by the Nazis in the first days of war. It was located at the present 21 Brzezińska Street, where now the book-shop building stands. This is how Ms Janina, featured in the film, recalls this place:

“When their holiday would begin on Friday, one could not even pass the Brzezińska Street, because Jews would walk around there. Their holiday lasted from Friday until Saturday afternoon. And at that time they did not even lit fire. They would ask a poor Polish boy to lit them fire or bring water and gave 10 groszy for it. As they did observe this holiday well.”

During the War, in the Spring of 1940, the Nazis set up a ghetto around the market square. All the Jews from Koluszki were forced to live there, including Jews removed from nearby towns and villages, and from Piotrków Trybunalski. It is estimated that about 2,000 people lived in the ghetto. In October 1942, Jews from Koluszki ghetto were deported to Treblinka. After the end of the war, only a few Jews, the Holocaust survivors, returned to Koluszki. In 1945, 6 Jews lived in the town.

The students‘ project was based on stories collected from town residents. These stories provided sources used to prepare a walking tour for fifth grade students. The walking tour was rehearsed during the third workshop and featured an unusual guest participants – a film crew from the French national television. 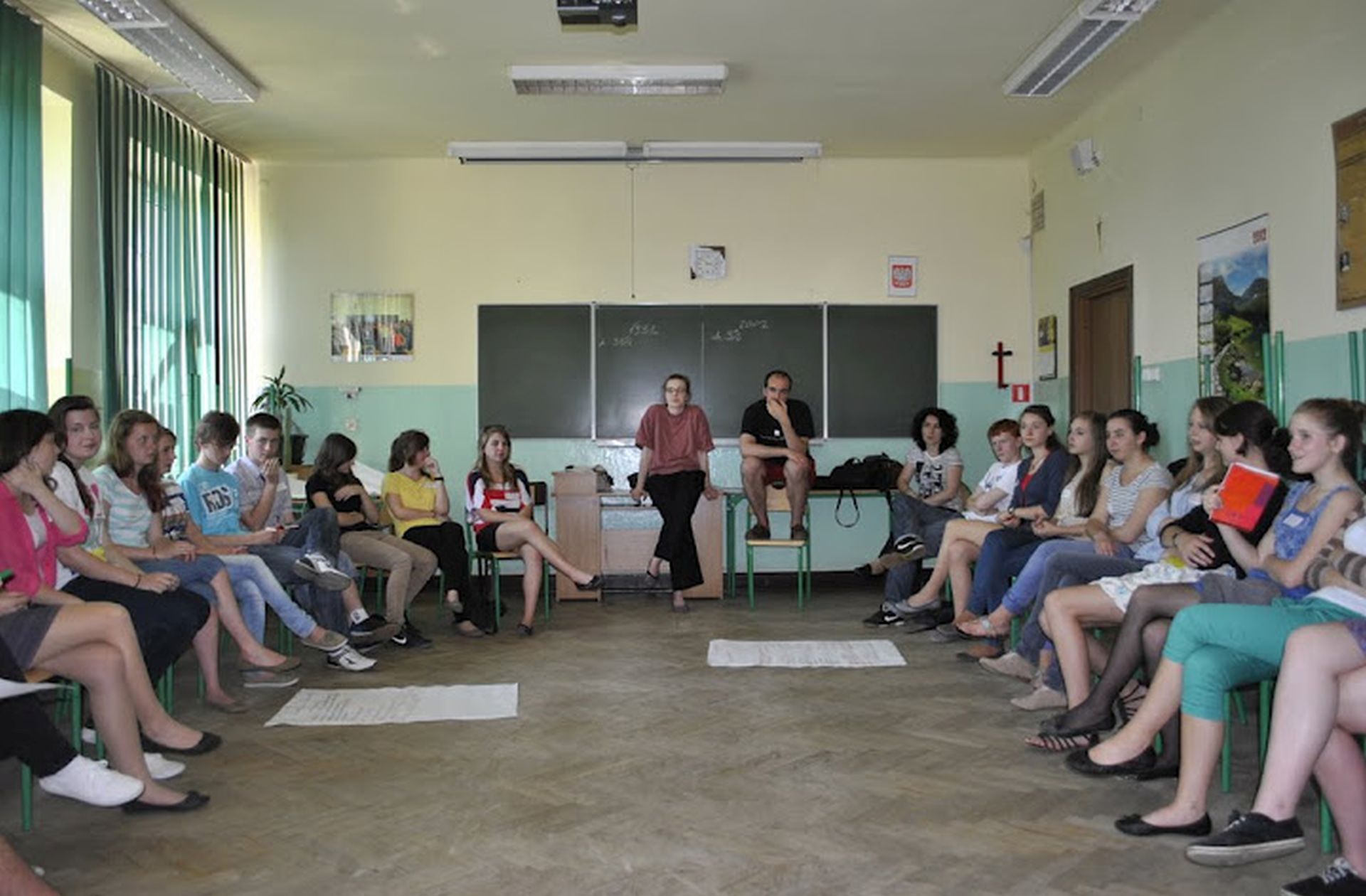 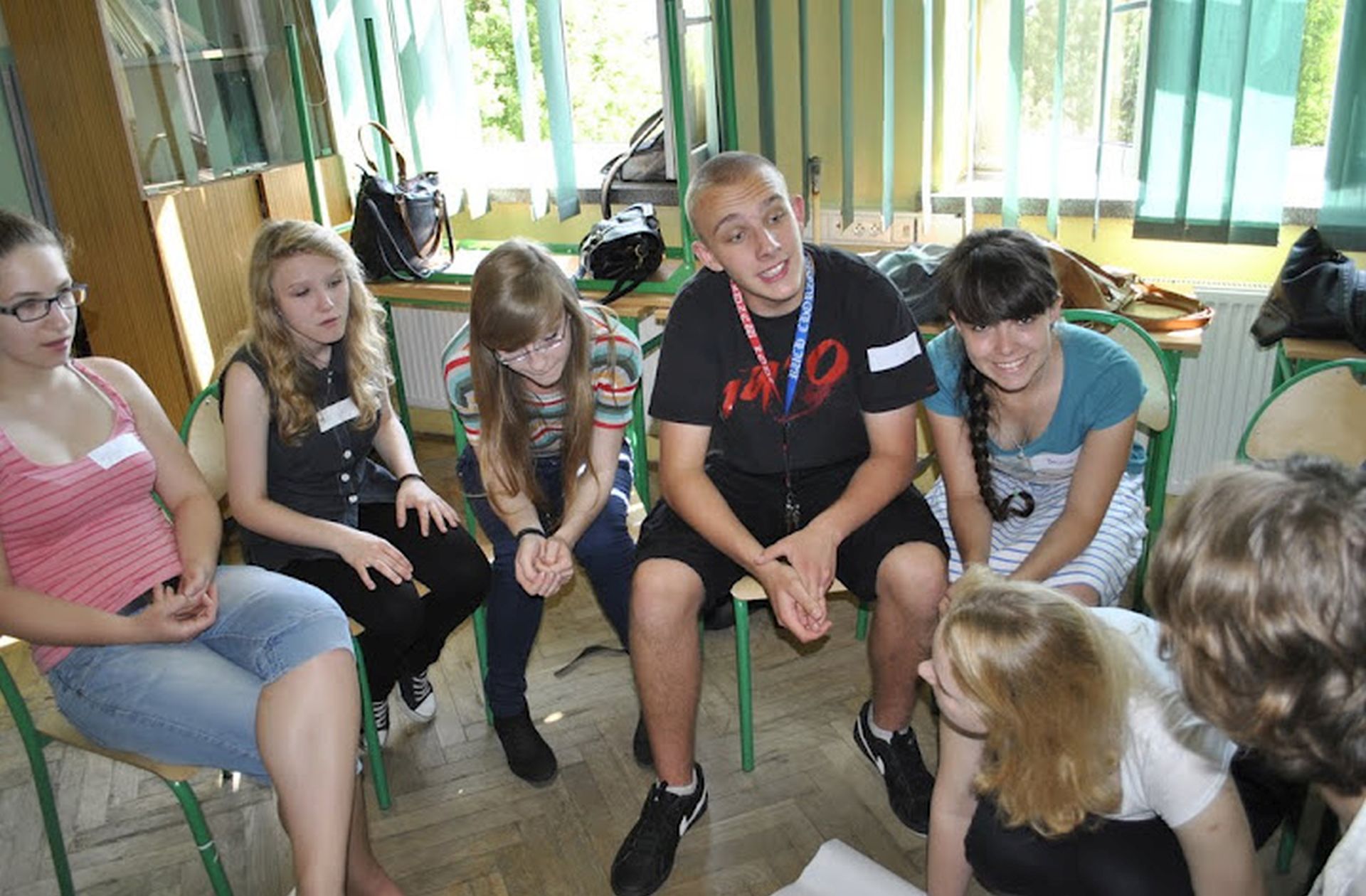 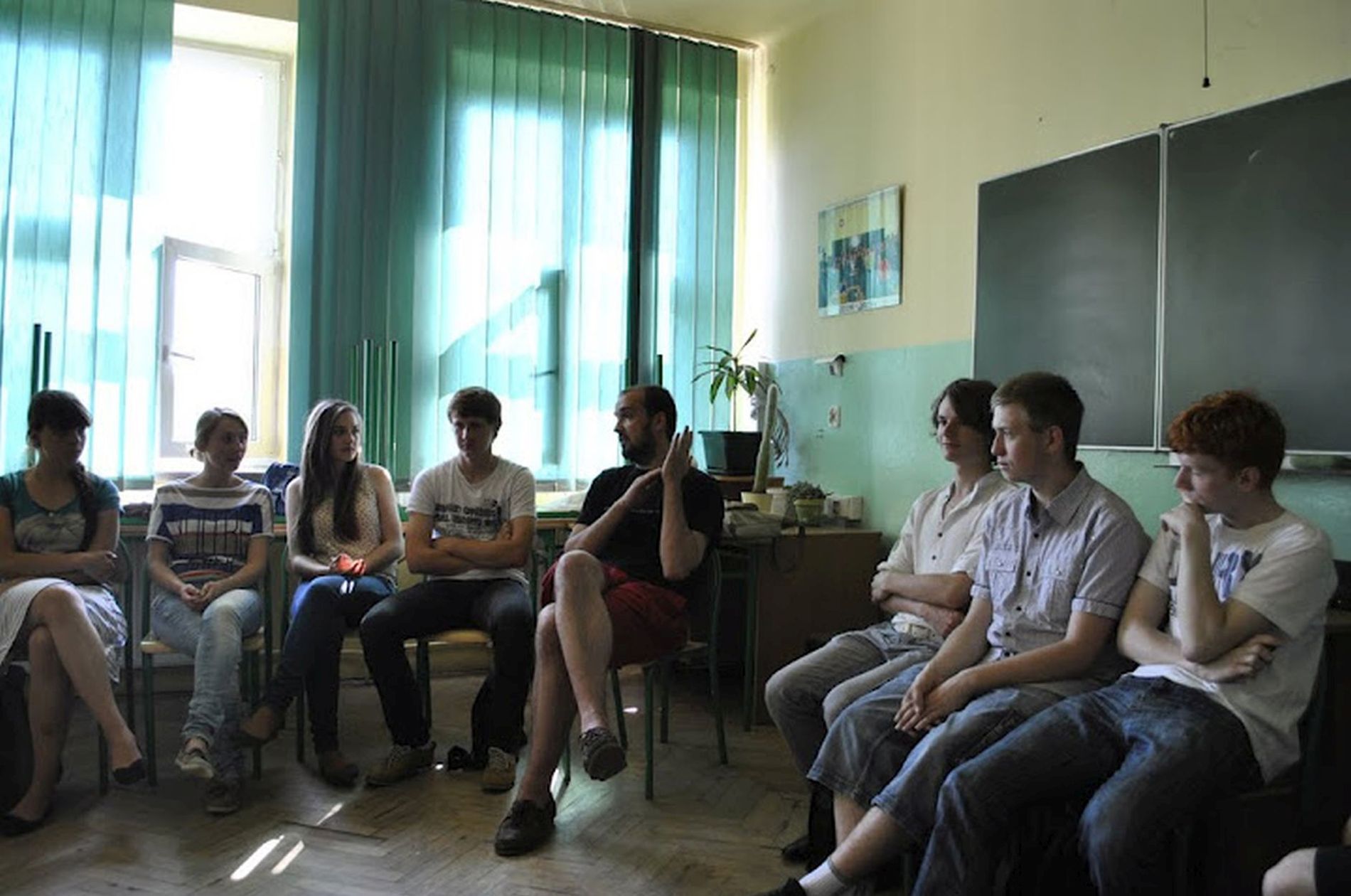 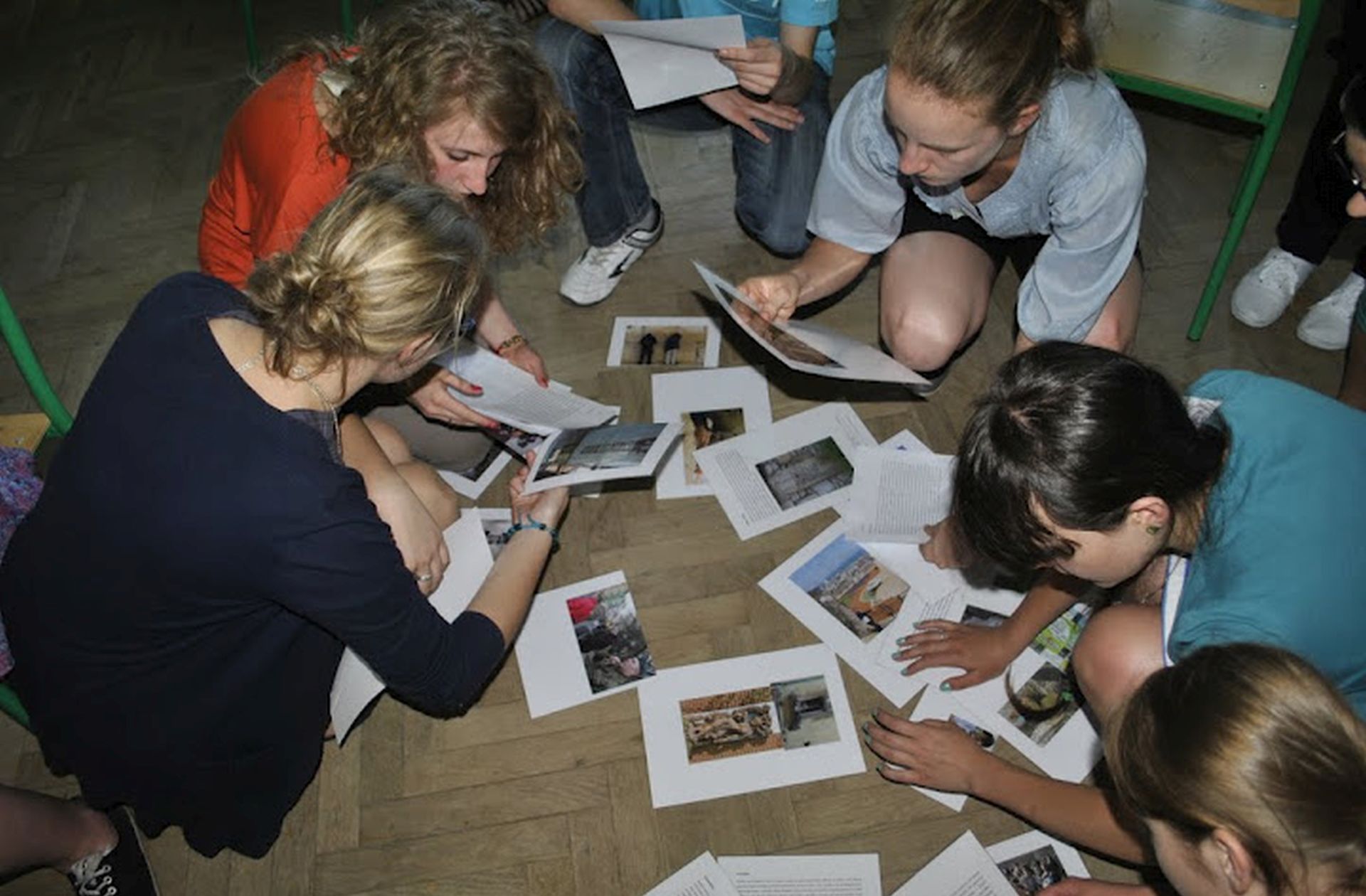 This walking tour was an eye-opener for the group as they understood how complicated this subject is. Some of them also used a local guide-book written by a resident of Koluszki, still alive today. Also, the young people contacted a history student who wrote his master’s thesis about the presence of Jews in the Łódź region. Among all these sources, the interviews proved to be the most important and most valuable. In all these circumstances, students could for the first time try their hand as local ethnographers, and they really enjoyed searching historical information this way.

Due to the age of the tour participants and the lack of emotional maturity, students refrained from drastic details, and the Holocaust was only the background for the stories they told. The focus was therefore on Jewish traditions, customs and culture. The fifth-year students could for example taste specialties of Jewish cuisine, e.g. challah. It was the perfect opportunity for the students to learn the history of Jews from Koluszki from testimonies. This allowed them to hear stories about specific people and events. Some told the stories of people their age: “There were five Jews in my class at the public school. I remember one, Mojszek. (he starts to sing) Mojszele, Mojszele drajle! I remember him very well, he was a great guy. Later, the Germans killed him, what a pity.

But such were the times, and no one could prevent it. In no way could we prevent it,” said Zbigniew.

There were also anecdotes, like the one about the rabbi of Koluszki whose son spent a lot of time looking for the perfect wife, but was never happy with the choice from his matchmaker.

Young tour guides also recalled memories of people who lived by the ghetto, and knew about the shed where the bodies of dead Jews were kept. A town residents told one of the students how after the war she saw the inscription -“Żydzi do Gazu” (“Jews to the gas”) at that place, which was shocking to her and seemed an unimaginable crime in the context of that place.
The meeting proved successful and the walking tour went very well. The film creators demonstrated professional excellence, and film editing team also deserves recognition. The fifth-year students reacted with great enthusiasm. They requested another such walking tour to be organized in the future. The eldest people living in Koluszki were also very willing to cooperate.

The actions undertaken by students resulted not only in a change of attitude towards local history which became closer to them, but also made students open themselves to discussion with elderly. And the other way around, the possibility to share their knowledge with the youth was a very important to the oldest town residents. And this was proved in a statement made by one of the authors of the project.

I come from a small town where people are mainly interested in who dates whom, whether a person is wealthy or why does not work. But there is a large group of people who gladly listen about the history of their “small homeland”, the nearest surrounding, the space in which we live. Due to the project, I have more courage to acquire the knowledge and pass it on.

If it had not been for the project, I would have never been courageous enough to ask the elderly people about the history of my town … From today on, a Jewish person is no longer for me a person with long beard, sidelocks and the Star of David, but someone with an incredibly interesting culture and whose ancestors once lived in my home town.

It has reminded us of the history that was already being forgotten, the history of Koluszki Jews. I hope that once remembered it will remain present forever and will be a testament for future generations. The days spent on the project were not wasted, since it made us realize that Jews are like us, Catholics, and more importantly they are people like us, and they suffer and feel just like us.

School of Dialogue program in Koluszki was made possible by the support from  ALAN J. HARRIS.