Jews in Koprzywnica accounted for one third of the local population in the interwar period. There were Jewish libraries as well as a host of various associations and organizations (including Agudat Izrael and Bund). The kehila had its own synagogue, mikveh, slaughterhouse and cemetery. The synagogue was also home to a traditional cheder – “Jesode ha-Tora”. A separate Jewish all-girls school also existed in Koprzywnica. Additionally, the community also ran its own health insurance. Today, little remains of the local Jews – just some wooden houses around the main square and the area of what once was a Jewish cemetery.

“I was moved by the stories of Jewish families and enchanted by their traditional clothes and piety. It saddens me that Jewish heritage in our town is mistreated so badly (…)

I wonder if there is any way to make people remember about Jews, to renovate some of the buildings and commemorate them in some way.”
This quote comes from one of the participants of School of Dialogue workshops organized in Koprzywnica’s junior high school in 2013. All students of the school involved in the history club learned about Jewish history and culture, also that of Jews in Koprzywnica. What was the profession of Cynamon Chil? Why no trace remains of the Jewish cemetery? What were the borders of Koprzywnica’s ghetto? Students asked more and more questions and got increasingly involved in figuring out the answers. Workshops with Forum’s educators offered them new glimpses into their town’s forgotten past. They learned about Jewish holidays, multiculturalism and local history. 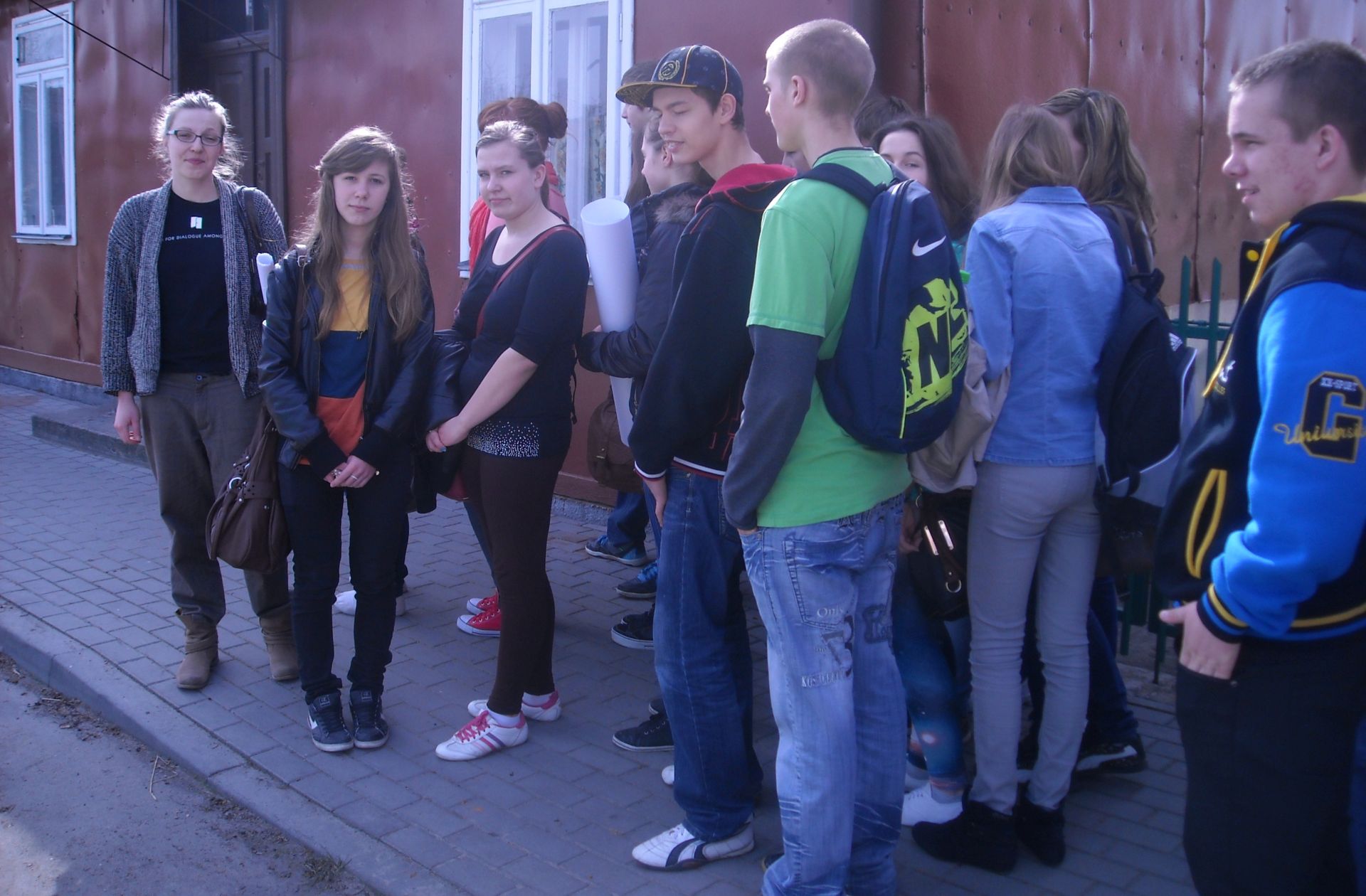 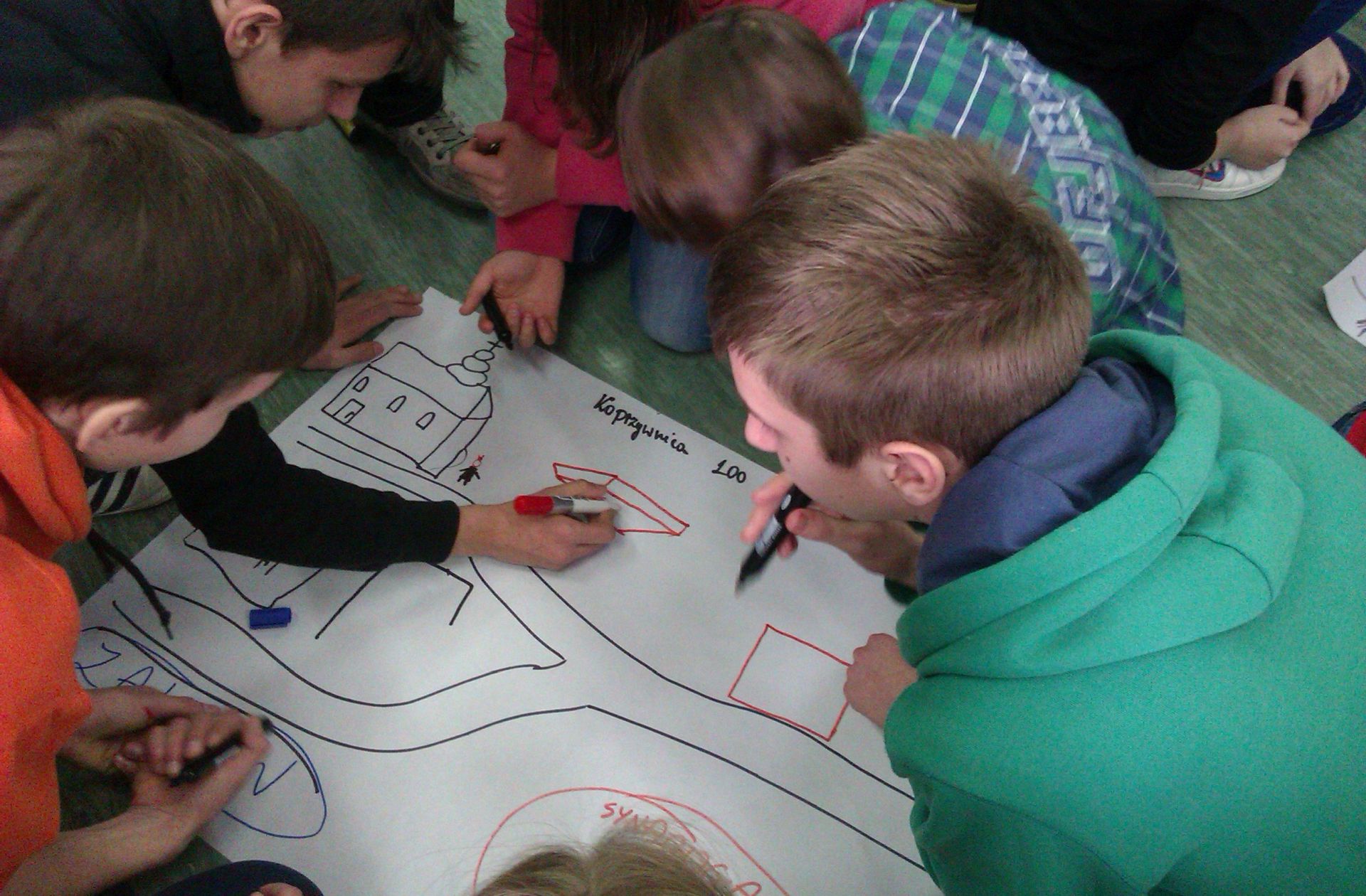 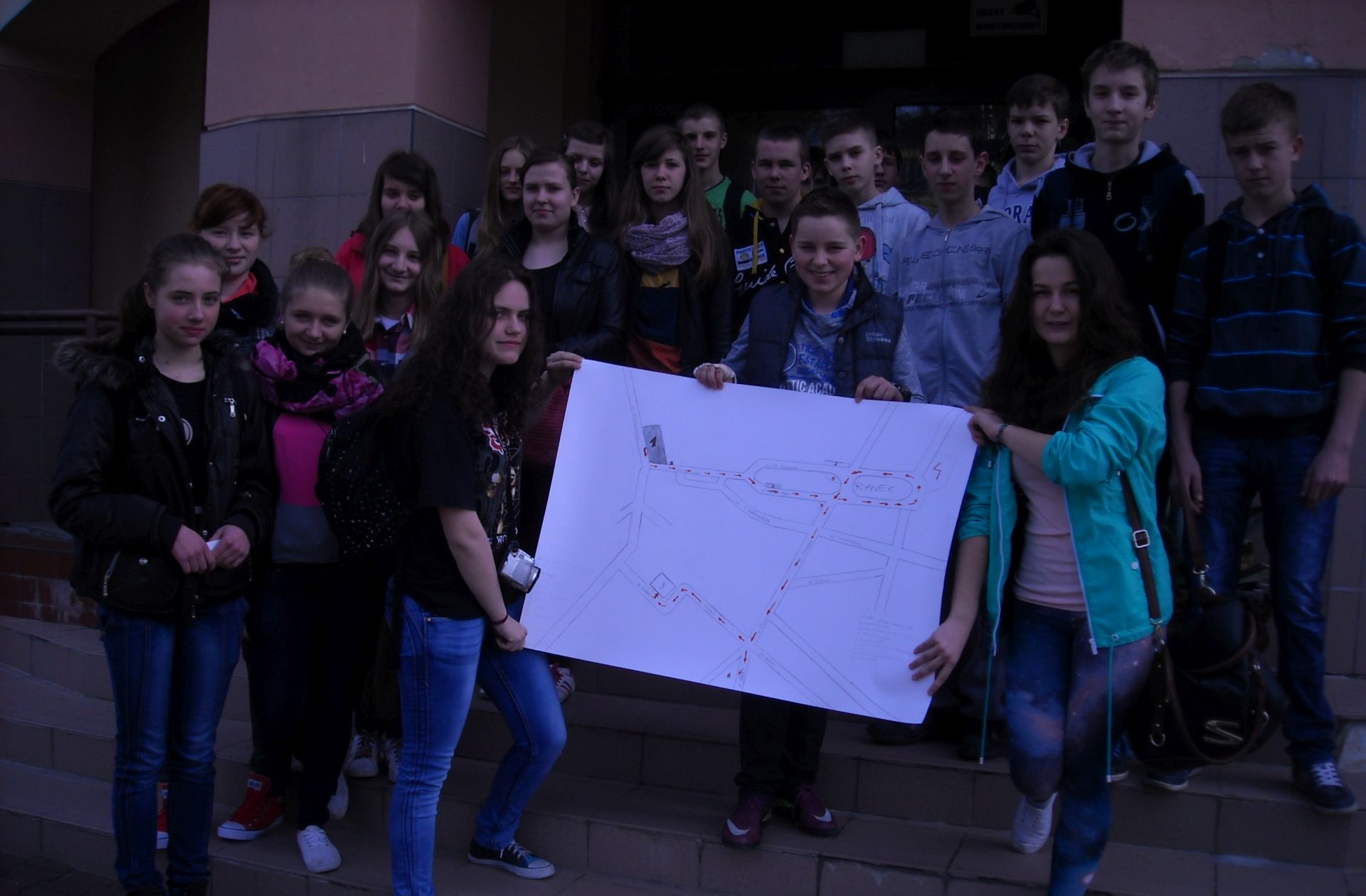 They put in a lot of effort to prepare the final project for the workshops – a walking tour through Jewish Koprzywnica. They scoured the internet, leafed through local publications in the libraries, and even visited the State Archives in Sandomierz. The town’s oldest residents provided them with stories from the prewar times.

The tour was organized for other students of the school and for local residents. Guests were shown around sites connected to Koprzywnica’s Jewish history by junior high school students.

And so they were taken to the site of the former synagogue and kehila building; they passed by houses which used to be homes of Jewish families and learned about the beginning of existence of Jewish community (and how rabbi Cynamon Chil contributed to it), its heyday and dramatic end.

They delineated borders of the ghetto that was created by Germans in 1941 and became home to about 1800 Jews.

They delineated borders of the ghetto that was created by Germans in 1941 and became home to about 1800 Jews. When the ghetto was liquidated, everyone  was deported to Treblinka.

Tour participants also visited the area that was the location of the Jewish cemetery and were moved by the history of the place. There is barely any trace left of the cemetery – it was completely destroyed, as matzevot were used as building material. Students decided to get involved and petitioned the town mayor to clean the cemetery premises and erect a memorial obelisk on its grounds. The also volunteered to be responsible for the cemetery area’s maintenance.

Students documented their work on one of the social media sites, uploading photographs, films and their final report. They also prepared a special edition of the school’s newspaper that focused on the history and culture of Jews in Poland and in Koprzywnica.

I was moved by the stories of Jewish families and enchanted by their traditional clothes and piety. It saddens me that Jewish heritage in our town is mistreated so badly (…) I wonder if there is any way to make people remember about Jews, renovate some of the buildings and commemorate them in some way.

I liked the fourth and final workshop the most, when we learned about multiculturalism. It was when I realized that your looks, color of your skin or religion do not matter. What’s most important is your character and how you are.