In 1720, there were four Jewish families in Krzepice. By 1765 the town already had 116 Jewish residents. The community had its own synagogue; there was even a Jewish district created right outside the city walls which was known as Nowe Miasto Krzepice (New Town of Krzepice). In 1808, 21% of Krzepice population was Jewish; in 1875, there were 1057 Jews, almost half of all the residents. In 1921, there were 1772 Jews in Krzepice, most of them Hassidim. After the tragic events of World War II, only a few of them returned – Szlama Rozyn and his wife Ruhla, Haim and Ruhla Moszkowicz and Dawid Korek. All of them decided to emigrate in 1968. The last Jewish resident, Mr.Józef Judkowski (Judek), died in Krzepice on March 8, 1993. Who remembers about them today? Who carries their stories in her memory? So that at least the memory lives on…

In 2014, two Forum for Dialogue visited Władysław Broniewski High School in Krzepice to conduct School of Dialogue workshops about Jewish history and culture on general and local levels. Workshop participants soaked up information about Jewish traditions and the different cultures their town used to consist of. What interested them the most was this local multiculturalism, coexistence that now seems to have disappeared completely, as there are no Jews left in Krzepice. This was why students wanted to hear about their life here, in their town. For the final workshop, students met with Romuald Cieśla, who wrote a book about the history of Krzepice. They listened to wartime and postwar stories of local residents and admired the mezuzah, rabbi’s seal and Shabbat candleholders that Mr. Cieśla had found. 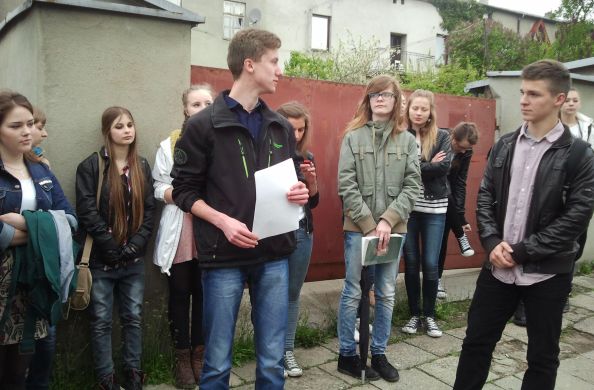 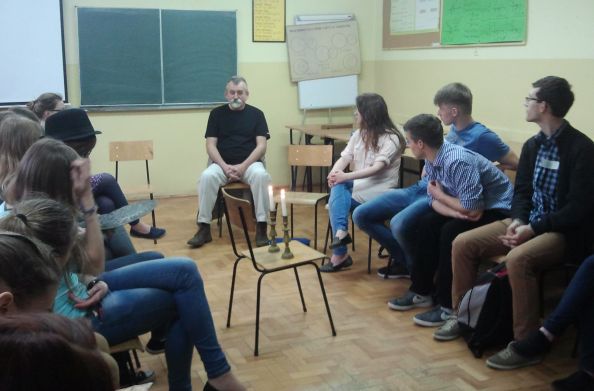 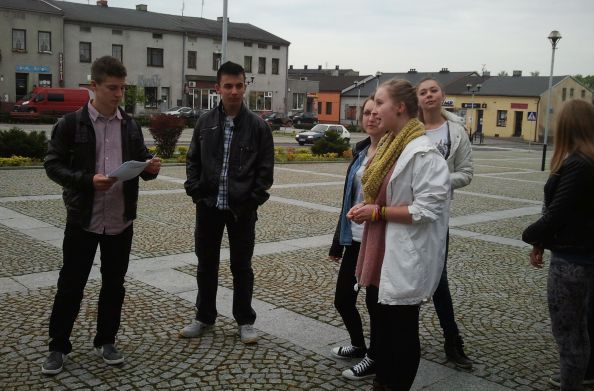 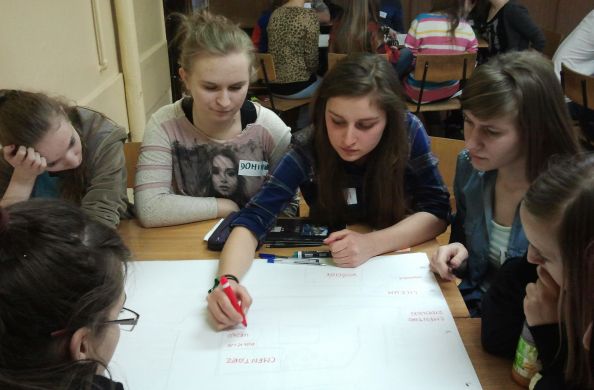 Students embarked on their final project – a walking tour of Jewish Krzepice – with even more enthusiasm. They called it “Krzepice: Two Cultures, Shared Memory”. They invited fellow students of the local junior high and high schools, the town mayor and parish priest. The turnout for the tour was impressive. Even the head rabbi of Upper Silesia and representatives of Matzevah Foundation attended the event. The tour’s starting point was a square at Solna Street, the former location of the so-called Great Synagogue. The building once stood right next to a Jewish school, the rabbi’s house and the mikveh.

Students told their guests about each of these sites. The group then walked the streets of the Jewish district. In the spring of 1940, an open ghetto for 1800 Jews was created between Rębielska, Krakowska, Solna and Dzielna Streets.
The next stop on the tour was the main square, where a memorial to Krzepice’s Jewish residents now stands.

In 1942, Germans deported them in two separate transports heading to KL Auschwitz-Birkenau. Some were also sent to the ghettos in Sosnowiec and Częstochowa. Tour participants were than taken to the building of the synagogue at ul.Wenecka 1. Then a walk through the Jewish cemetery that boasts an extraordinary group of 400 wrought-iron matzevot from mid-19th century. On the way to the different stops, students told their guests life stories of particular families that inhabited Krzepice before the war. They mentioned Joseph Sher, Abraham Besser, Wolf Leslau. The tour’s route and scenario were created by students’ themselves. Professional audio equipment was borrowed from the local parish. While School of Dialogue workshops were still going on, students’ decided to clean up the Jewish cemetery. After all, since 2008 students of Krzepice School Complex are responsible for the cemetery’s maintenance. They remember not to forget.

All in all, for me the workshops were a memory ritual.

I hope that the knowledge I acquired through these workshops will be useful in the future, when I have the opportunity to pass it on to others.

Traditions and multiculturalism around us give us an opportunity to explore new horizons and stop being afraid of something new and seemingly strange.

School of Dialogue program in Krzepice was made possible by the support from PAULINA and ŁUKASZ GASIŃSCY, PAULINA KIESZKOWSKA-KNAPIK and MACIEJ KNAPIK.