After the series of workshops held in School Complex no.1 in Maków, Oliwia wrote in a letter to Forum of Dialogue: “These workshops overcame Jewish stereotypes proving that we are the same, the only difference being our cultures and religions.” Others said and wrote similar things. 14-year-old Jakub wrote about heritage buildings whose existence he was unaware of before, but now he does; Kinga says that the knowledge she gained enriched her and filled blank spots.

Maków Mazowiecki is a small town located 77km north of Warsaw, a little past Serock and Pułtusk. According to written sources, sometime in the 16th century the Jewish community began to develop there and by 19th century Jews comprised 90% of the population. Despite the murders during the Swedish-Polish war in the 17th centuries and subsequent pogroms, accusations of black magic and the widespread intolerance of the 17th and 18th centuries. Jews of Maków were predominantly tailors, furriers and bakers. Later on they would become weavers, tanners and millers. They had their own district, Kahal and political parties with representatives in the local authorities and ample support from the residents.

A charity organization existed alongside a fund that collected money for settlers in Palestine.
In 1940, some of Maków Jews were deported to Węgrów, while a work camp and a ghetto were created in Maków. Altogether ca.12,000 people had passed through the ghetto; among them local Jews, refugees from all over Poland and deportees from nearby towns in Maków and Pułtusk counties. Hunger and disease, persecutions and oppression. Murders and executions, shootings, hangings. Those still fit to work were taken to Auschwitz, while women and children under 16 were sent to a camp in Małkinia. “Zeszyty Oświęcimskie” journal no.14 from 1974 published fragments from wartime diary of Maków resident Lejb Langfus, member of the Sonderkommando involved in Auschwitz resistance movement.

With the support of Forum educators, Ewelina Bartosik and Anna Desponds, and thanks to School of Dialogue workshops, first year students from Maków’s junior high school organized a walking tour tracing the Maków Jewish history for younger schoolkids as well as for anyone else interested to learn more about their town of residence. 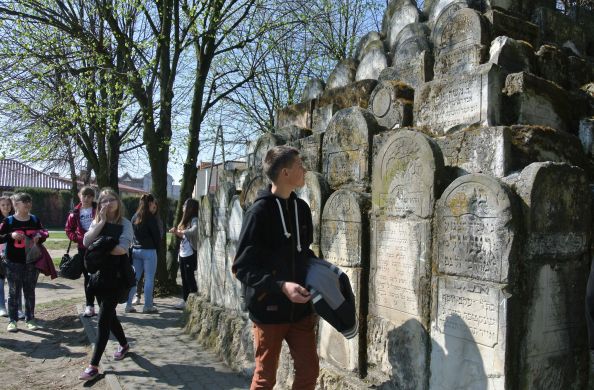 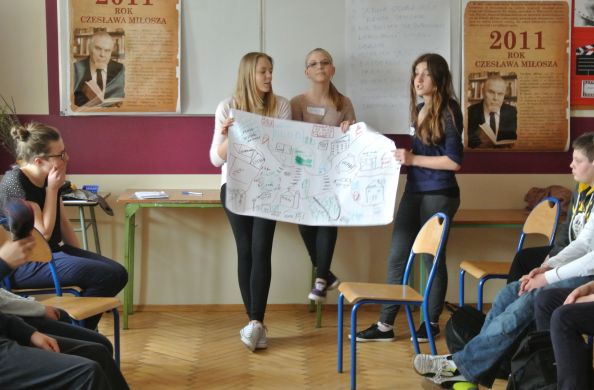 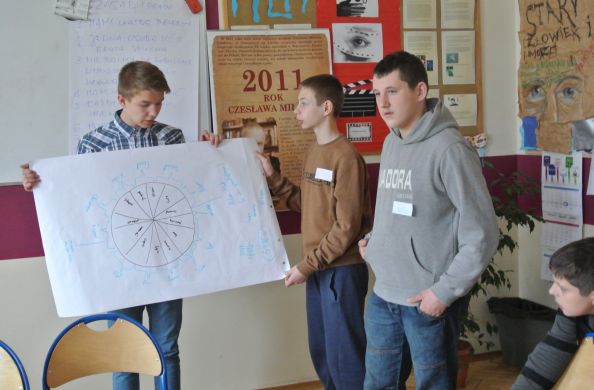 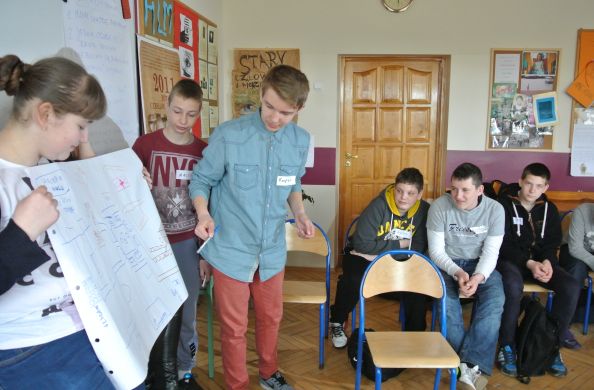 The tour was held on one of the Thursdays in June, there were about 20 participants, among them the school principal, a few teachers and parents, and even a reporter from “Kurier Makowski”.

A few of the most important stops were sites where at least some trace was left visible, some element of history. And so the group went to the synagogue that is no more; to the beit midrash which is now an abandoned building at Zielony Rynek 5; then on to the mikveh, or rather – to what remains of it. The site is now home to a fitness gym. The area of Zielony Rynek and Franciszkańska Street became the ghetto from late summer of 1940, surrounded not by a wall, but by a 4-meter-high wooden fence with barbed wire on top. Tour participants walked there as well, passing on the way fragments of the Jewish district and making a stop for the Jewish bakery and a Jewish movie theater. Then on to the cemetery, the old one, which is now a bus station. Between Adamowska and Przasnyska Streets. Jewish tombstones were used to pave Kościelna and Grabowa Streets (Church and Hornbeam streets) that used to be called Bieruta and Nowotki Streets (after prominent Polish communists). Similarly with Moniuszki and Kościuszki Streets. In 1987 the matzevot that were salvaged and dug out were used to create a monument that now stands near the bus station. The group lay their stones to commemmorate the site.

Students dressed up as historical figures: there was rabbi Efraim Najman-Salomon, Izaak Wesołek – Maków’s chronicler and then a Jewish bride together with laundrywomen and female residents of the former Jewish district. And the group walked on, stopping here and there, asking questions along the way and helping participants come up with answers. They asked about Jewish holidays, about the streets that would take the group to the beit midrash which now stands abandoned. They also recited fragments of “Pan Tadeusz” epic poem by Adam Mickiewicz about Jankiel the inn-keeper “an old Jew commonly known for his goodheartedness”. Next to the lapidarium the students drew a matzeva with a symbol on the ground, discussing and explaining everything. They then posed by a traditional wedding photo and impersonated a couple from one of the prewar silent Jewish films. They talked about the ghetto, what it looked like and what it must have been like inside.
The schoolkids shot a short film documenting their actions and created a painstaking photo documentation with a comment here and there. One of the students with the help of her father and Mr. Wojciech Henrykowski, a local historian, created a presentation about Maków’s matzevot and about Jewish cemeteries in general. The local internet magazines posted information about the project and wrote short articles.

I learned a lot about Jewish culture, history and religion. I was completely unaware that so many Jewish sites are left in Maków.

Thanks to these workshops I understood many things and leave enriched with new knowledge.

SCHOOL OF DIALOGUE program in Maków Mazowiecki was made possible by the support from RICHARD J. WEINTRAUB.