“Today, memories roam Mińsk and the wind plays in the last Jewish prayer house left at Piłsudskiego 2 Street” writes Robert Mielcarek about dr Alicja Gontarek’s publication on the local Jewish community. Participants of School of Dialogue workshops want to awaken these memories. They call up Ms. Gontarek, interview their history teacher dr Lilla Kłos, read publications from the Jewish Historical Institute, meet with Mr. Mariusz Dzienio, collector of judaica. They want to learn as much as possible about their town’s Jewish past. Their interest was sparked by School of Dialogue workshops.

It’s through meetings with Forum for Dialogue educators that students learned that Jews comprised 37% of the local population before World War II, and in the 19th century were the majority of Mińsk Mazowiecki residents. First Jews settled here in the 17th century. Many of them were strongly influenced by Hasidism – tzadik Jakub Perłow had his court here, followers of the Ger tzaddik as well as those from Aleksandrów, Parysów, Radzymin, Skierniewice, Piaseczno and Nowomińsk also lived here. Jews owned grocery and tobacco shops, were milliners and iron-mongers, shoemakers and tailors, bakers and brewers.

All this came to an abrupt stop on August 22, 1942, when Germans crowded them all at the market square and then onto the railway ramp, from which transports left for Treblinka. Today, only the Jewish cemetery and the building of the former beit midrash are sole testaments to the existence of a Jewish community in Mińsk.

Junior high school students demonstrated a lot of enthusiasm for the idea of commemorating the local Jewish community. They decide to embark on a multidimensional project: to create a film, a walking tour and a tourist brochure. And to organize a pantomime, refreshments and Jewish dance class. They would clean up the Jewish cemetery, and then create and erect a memorial plaque there. They would rent judaica for a temporary exhibition and rent a room for the purpose of the performance. “Before the project’s finale we skimmed many books, sought advice from our tutors Ms. Lilia Kłos and Ms. Ewa Borkowska, we also visited a number of local organizations. We also held a meeting with Mr. Mariusz Dzienio and took a tour of POLIN Museum of the History of Polish Jews” recount students their project preparation work. 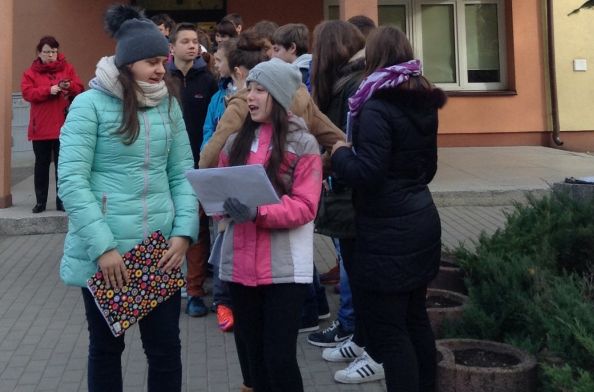 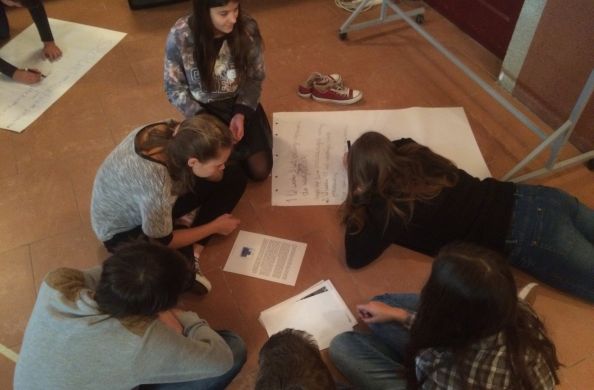 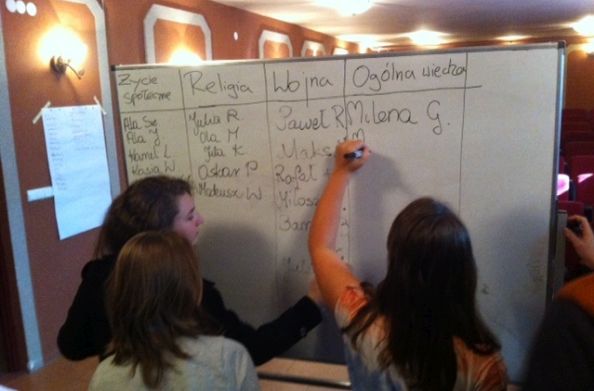 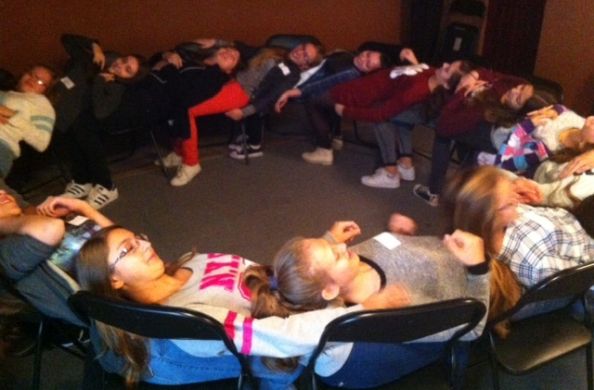 On the Saturday morning of November 28th, students implement all their plans. On that day, the guests invited for their walking tour gather at the corner of Piłsudskiego Street (former Karczewska Street) and Traugutta Street. Martyna and Milena explain: “There were many stores and workshops on Karczewska Street: teahouses, cafes, tailor shops. But Karczewska wasn’t the only street bustling with Jewish life. Rynek, or Mińsk’s main square, was also an important place. On workdays, you would hear Polish and Yiddish, deals were sealed, acquaintances were made. Nadrzeczna Street was home to the Kehila and a Jewish school. The mikveh was located at Bulwarna Street.” The tour takes participants now to Kilińskiego Square, where students talk about a very difficult topic: “We should also mention the anti-Jewish activities that happened here in June of 1936, following the murder of seargent major of 7th Platoon of Lublin Cavalry, Jan Bujak, by Judka Lejb Chaskielewicz on June 1.

A fire spread through many of the buildings whose owners were Jewish.”
The rest of the tour program is held in the Municipal Library. After a saxophone concert and a dance show, students present a performance based on Martin Buber’s “Tales of the Hasidim”. The meeting ends with a film screening made by the students with the support of the library and a tasting of Jewish dishes. Students managed to share their knowledge with many people, as their event attracted a sizable crowd. Everyone was impressed with the knowledge, organization skills and the effort that went into preparation work. School of Dialogue participants are happy. They are convinced that – to give the voice to one of the organizers, Laura – “every workshop participant contributed to changing our town to some extent”.

Jews worked here, but also developed their culture. Unfortunately, the common history was interrupted by events that can only be called cruel and inhuman. Luckily, memories survive in human memory and cannot be erased.

I did not even notice when the time passed. I am sad that the workshops have come to an end. But my plans are to become a School of Dialogue educator in the future.

We are discussing issues that are connected to the present and to the past. I like that everyone respects each other’s opinions and we can talk literally about any subject and listen to what each of us has to say.