School of Dialogue at "Sybiracy" High School No 9

The Jewish story was interrupted by the war and destroyed by the Germans. They razed the Jewish presence from the town never to resurface again. There is no Jewish library, no amateur theatre, no school, no sports clubs, no Jewish craftsmen, not a trace of Jewish merchants. Lucky were those who left Nowy Sącz a bit earlier, during the Fourth and Fifth Aliyah, when during the economic crisis taxes rose and many small businesses fell, so their owners left.

After the Germans occupied Nowy Sącz, the Jews were first made to wear the armbands with the Star of David. Then their liberty to move about the town was limited, and there was some forced labour. Jewish institutions were closed down, shops were boarded. In 1941 a ghetto was created, for Jews from Nowy Sącz, Łódź, Sieradz, Lwów and Bielsk, 12 thousand people in total. The conditions were appalling, ghetto inhabitants suffered from hunger and poor living conditions. They were often just shot on sight. The first execution of Jews and Poles took place in May 1940. In the autumn of 1941 30 more Jews were executed.

As a part of “cigarette hunt” where tobacco merchants were targeted, 70 Jews more were killed. In the Jewish cemetery 200 Jews were killed then in 2 days.

The ghetto was liquidated on 23 August 1942. The elderly and the infirm were gathered in Kazimierza Wielkiego street and shot. Those to be carted away were gathered on the Dunajec bank. 750 young men were transported to forced labour camps in Sędziszów, Rożnowo and Muszyna, while the rest was sent to the Bełżec death camp.

Some of the Jews returned after the war, but mainly to leave right away. The last Jews left during purges of 1968 and 1969.  Jacob Müller used to come in the summer. He lived in Sweden since 1969, but he took care of the cemetery and the Bajs Nusn synagogue. He also guided tours in the Jewish quarter, where he was born and used to live. His siblings were murdered, parents gassed in a gas chamber.

He went on guiding around the town which was not there any more. He witnessed its fall and was its tragic victim. He died on 18 December 2010.

Jews started coming to Nowy Sącz already in 15th century, with larger numbers settling there in 17th century, mostly around the Market Square, and around the Royal Castle, in the very beginning.

In 1780 the first synagogue was built. They were mostly traders, dealing in honey, tobacco, fabrics, leather and wine. They were goldsmiths, cappers, furriers and tailors, later also bankers, restaurateurs and hoteliers.

Some anti-Jewish events also took place from time to time, with the accusations of setting fires and ritual killings thrown in.

In 19th century Jewish cultural and social life throve. Some did assimilate, some of the more well-to-do Jews were „progressive”, subscribing to the Reformed Judaism. The poorer remained traditional. In addition there were quite a few very conservative Hasidim, centred around the Zadik Chaim Halberstam.

In the period between the First and the Second World War the Jews numbered a third of the town’s population, living mostly downtown and in the Zakamienica district. They had their main synagogue and around 20 smaller houses of prayer, a library, an orphanage, numerous charities, an amateur theatre, 2 sports clubs and male Hebrew Secondary School. There were many political parties: Aguda, cooperating with Piłsudski’s BBWR, Mizrachi, Zion labour Party and Zion Revisionists, Erec Izrael Ha-Owedet, Poalej Zion. Also the Jewish Association Bund operated there, and the Jewish Central School Organization, followed by the school itself. The school was at first with only 4 classes, later with 5.

In the spring of 1936 some Jewish shops were attacked. Further attack took place in the fall of 1937 and in early 1939. In September 1939 Germans came to Nowy Sącz.

Within the framework of the School of Dialogue the Nowy Sącz youth from the Sybiracy Group of Schools participated in a 4-day workshop in May, during which they learnt about the Jewish past of their town. They also invited guest speakers, like Ewa Andrzejewska, the author of the book “Obok inny czas. O Mieście i Jakubie” (Sidestepping the time. About the Town and Jacob). She told the students about the pre-war town, about Jacob Müller and his life, marred by war. Another guest was Łukasz Połoński, a student of Jagiellonian University specialising in the history of Jews from Nowy Sącz. Discussions and talks were abundant during the workshop. Subjects included the past and the present, the multikulti, the Roma or their feelings. 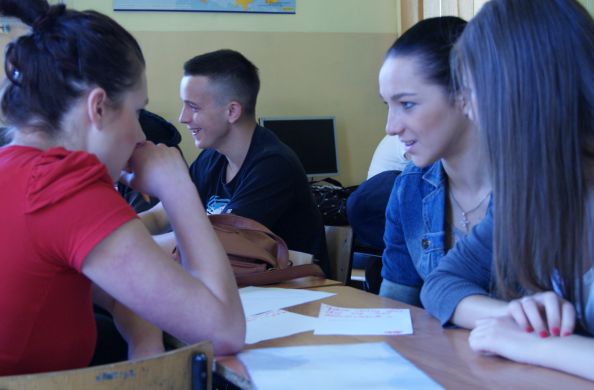 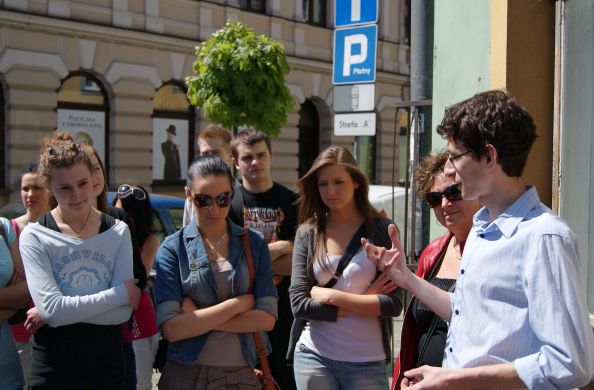 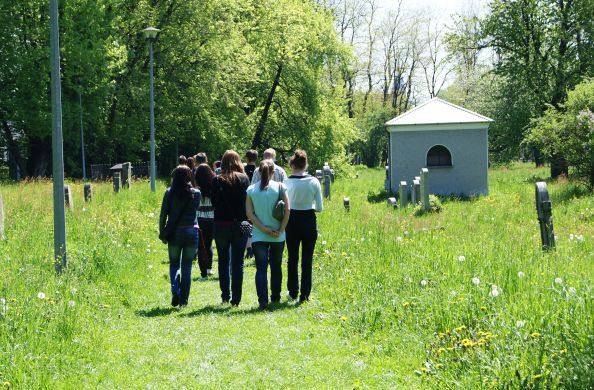 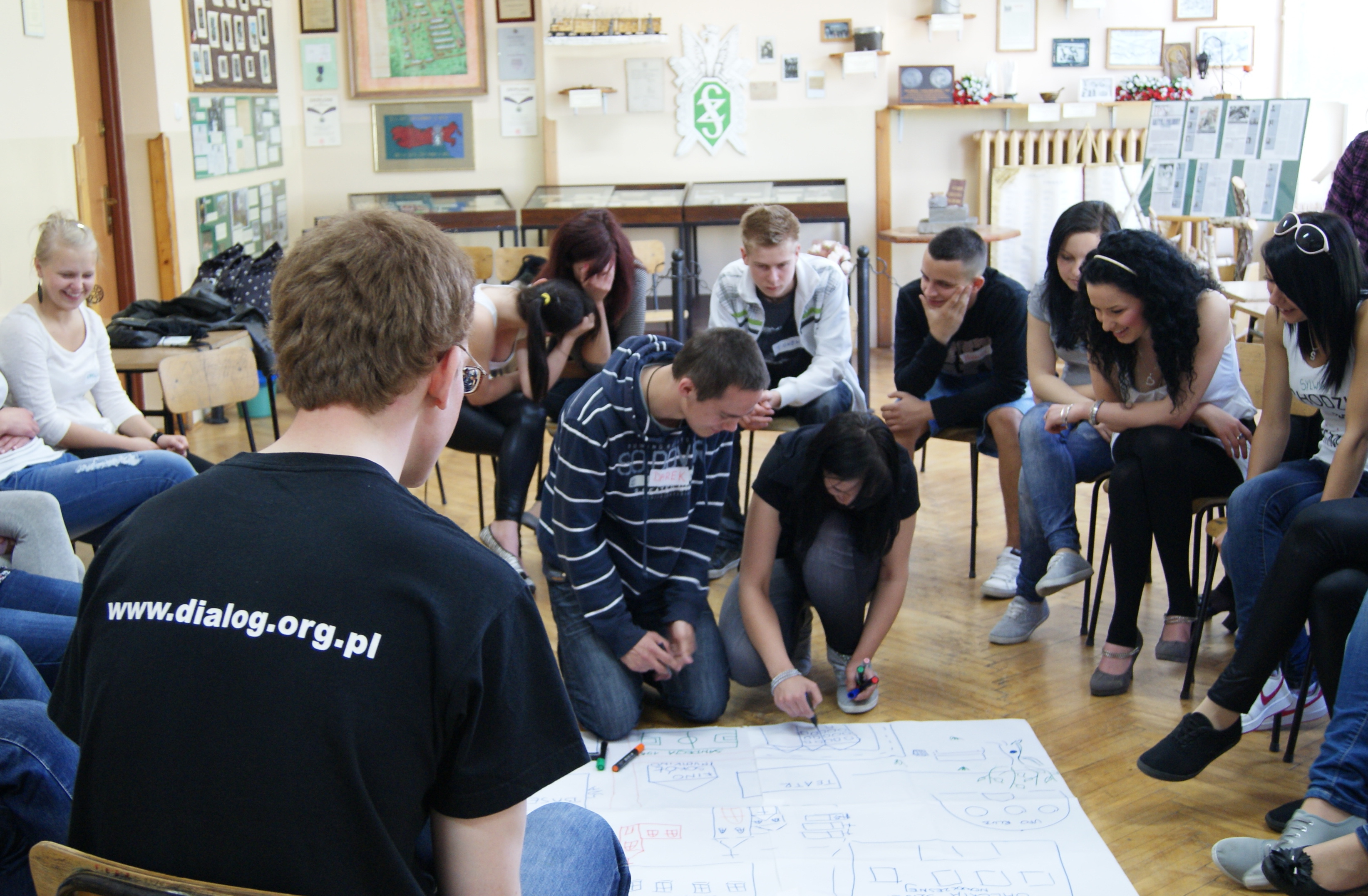 The walk which concluded the project started in the Planty near the monument to Adam Mickiewicz The students explained there who Jacob Müller  was and why they talked about him, about the need to talk about him and to remember him.

Walking towards Jagiellońska street the students stopped next to the Hasidim Prayer House, in the backyard of one of the houses there. It was built at the turn of 19th century as a small, straw house,  destroyed during the war, to be replaced with a brick structure after it. Today only a movable roof fragment survives, which during the Feast of Tabernacles was moved by means of a crank. .

The next stop was Jagiellońska 12, at the Natan Kriszer Prayer Hose. The building was also built at the turn of the 19th century and during the war was used as a warehouse. After the war it was restored to its original function and is now the only fuctioning Hasidim Prayer House in Poland, with prayers held sometimes on Saturdays, depending on demand. Inside there are prayer books and yarmulkes, giving the impression that the faithful just left.

The walk followed to Szwedzka 17, where a Hebrew Secondary School used to be, and where now is a construction school, then towards the Dunajec to Franciszkańska street, at an old townhouse where a plaque commemorates 81 Jews murdered there in 1942. The next stop for 3 Maja square, with another plaque telling the passer-by that the people remember. The limits of the ghetto are discreetly delineated on the pavement, but if you don’tknow what to look for, you may miss that.

Then, along the way, there was the Old Synagogue, called the Town Synangogue, built in the 18th century on a rectangular plan with two square towers flanking the front facade, added after the fire of 1894. The building houses now the art gallery called “Nowa Synagoga” (surprisingly – “New Synagogue”) and there is a plaque inside mentioning 25 thousand Jews from the Nowy Sącz region who perished during the Holocaust. Next to the synagogue but outside the city walls there used to be Jewish cemetery, the oldest in Nowy Sącz. The cemetery was levelled during the construction of Piotr Skarga street, but people remained buried there, didn’t they?

The group went to the corner of Rybacka and Tarnowska, where the Kamienica stream flows into the Dunajec river, to visit yet another cemetery, built in the 19th century due to the lack of space in the old one. This cemetery is fenced and well-cared for, with a few trees and about 200 tombstones in Hebrew, sometimes in Polish or Yiddish. Jacob Müller is also buried here. Some tombstones were used during the war to pave the streets of Nowy Sącz – the present setup is after the post-war restoration. In the cemetery there were mass executions during the war, with the victims buried in mass graves. There is a monument from 1959 commemorating these atrocities.

Some time later the students took part in a meeting organized by the Pedagogic Library and the District Museum, not a part of the School of Dialogue, but just so. The meeting was held on 16 December 2011 in the Gallery Dawna Synagoga in Berka Joselewicza street.

During workshops I`ve learned a lot about Jewish tradition. Nowadays there are no Jews left in Nowy Sącz but there is a synagogue, a cemetery, that is visited by Jewish visitors from abroad. Workshops helped me to understand the Jewish culture.

Thanks to these workshops I understood how Jewish life looked like before the war, during the war and after it ended. With some things I was surprised, with some I was moved. I would never think that Jewish culture influenced so much the culture in which I grew in.

I discovered my city anew – I didn`t know that it has such a rich history, that so much happened in here. It all inspired me to look for the traces of the Jewish past in my neighborhood. I am very enthusiastic towards this topic and I`m going to do my own research in order to understand well what is around me.

School of Dialogue program in Nowy Sącz was made possible by the support from HARVEY KRUEGER.