The synagogue in Pińczów is over 400 years old. During occupation, it was used as a garage, then as a warehouse for building materials and fertilizers. Today, it is the office of the Museum of Ponidzie. Mr Jerzy Znojek, Director of the Regional Museum, has been involved in its renovation since the 80’s. During one of the workshops organized by the School of Dialogue, he told students about his activity. Young people listened to him attentively, asked questions, and then they told him about the project and asked for his advice – after a series of workshops with the Forum for Dialogue educators, students want to organize a location-based game following the footsteps of Jews from Pińczów.

This discussion at school was a meeting of local activists, being people who wanted to restore the memory about people of the pre-war shtetl. Memory about the town where Jews lived from the 16th century and where at peak moments Jews constituted 89% of the town’s population. The town where there were two synagogues, several cheders, stalls, a mikveh, two cemeteries and a Jewish hospital. Memory about the town where there was a Jewish dying outlet, a tannery, a cotton factory and a malt water factory. Where sessions of the Crown Jewish Parliament were held, and where Chaim Miler Finkler lived in the Hasidim manor.

Finally about the town from which in 1942 approximately 3,000 Jews were transported to the death camp in Treblinka.

“The town, which for me was the place where I learn, do shopping, showed me its other old face. I realized what these people had to experience. I examined the issues which I would never challenge to do by myself. This history of Pińczów should not be underestimated, even though nobody talks about it. People should be reminded of it”- says one of the high school students from Pińczów after the end of the School of Dialogue program. During the workshops, students independently discovered the history of Pińczów, using various publications, asking grandparents how they remember the town from before the War, exploring the collections of the Regional Museum. At a request of students, one of the employees of the Museum even translated a few fragments of the Pińczów Yizkor Book. During the meetings at school, students learned about Jewish culture and religion, and acquired abilities of team work on the project. In order to prepare the location-based game, they were divided into 7 project groups responsible for specific tasks. 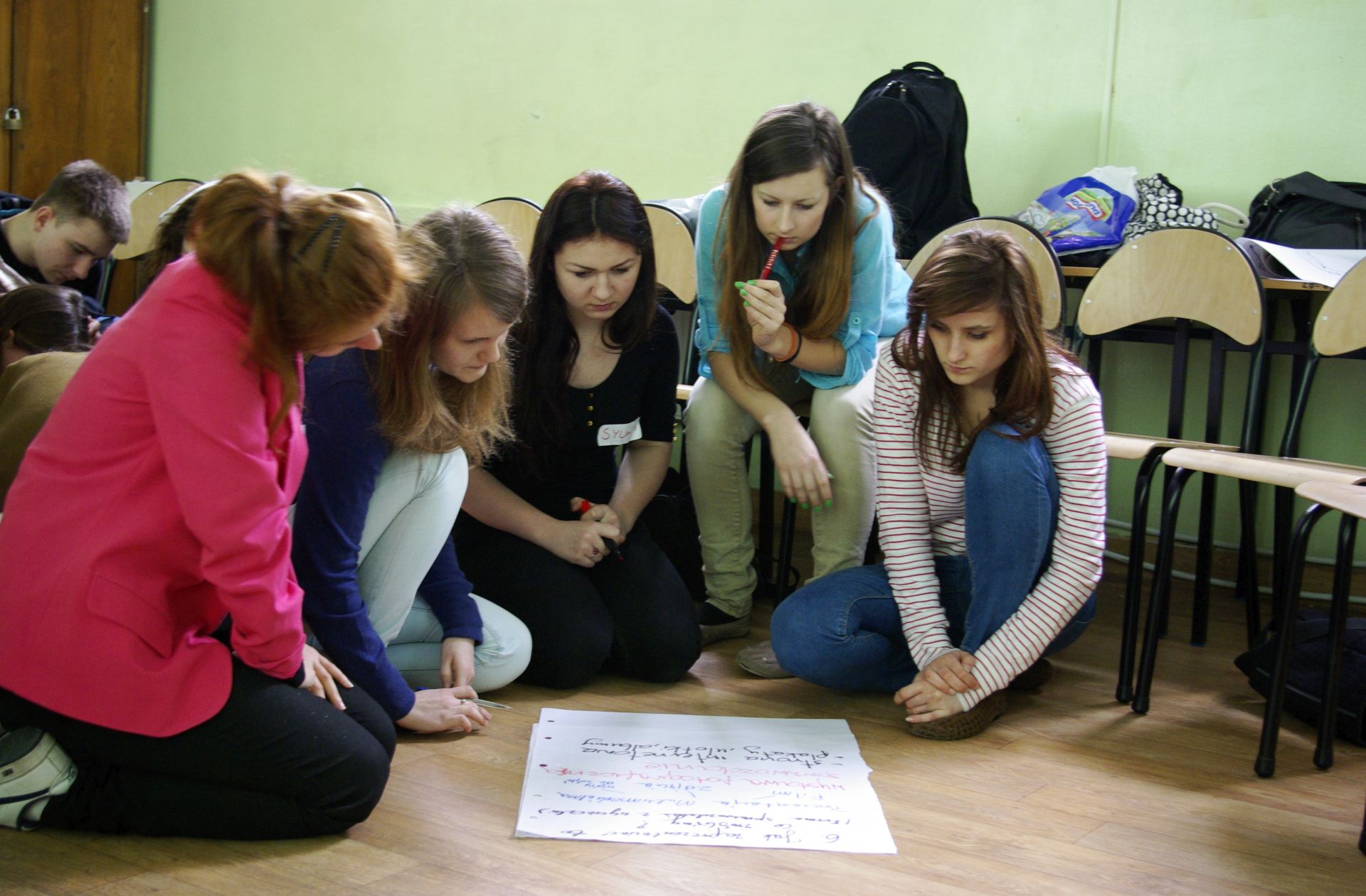 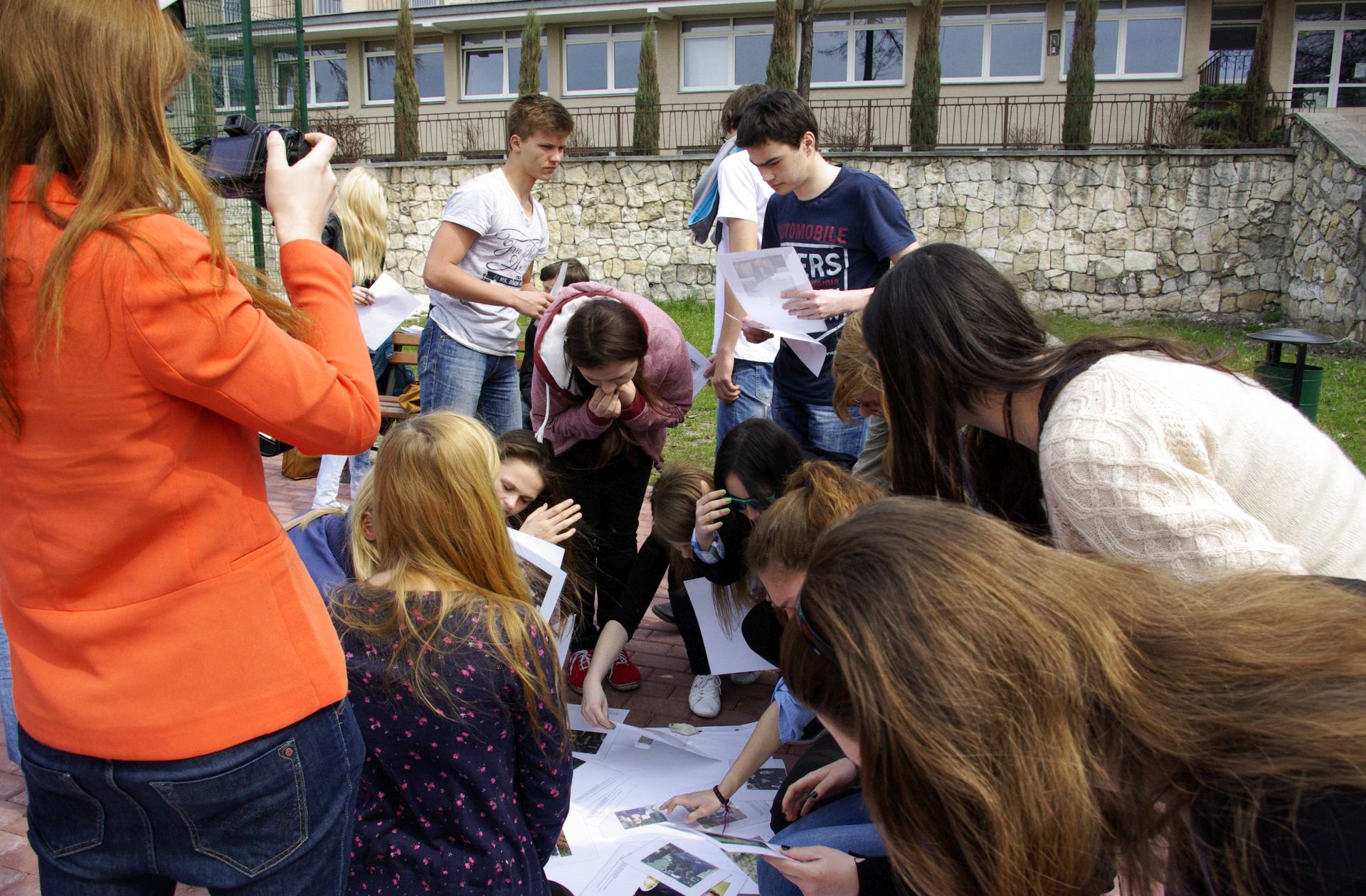 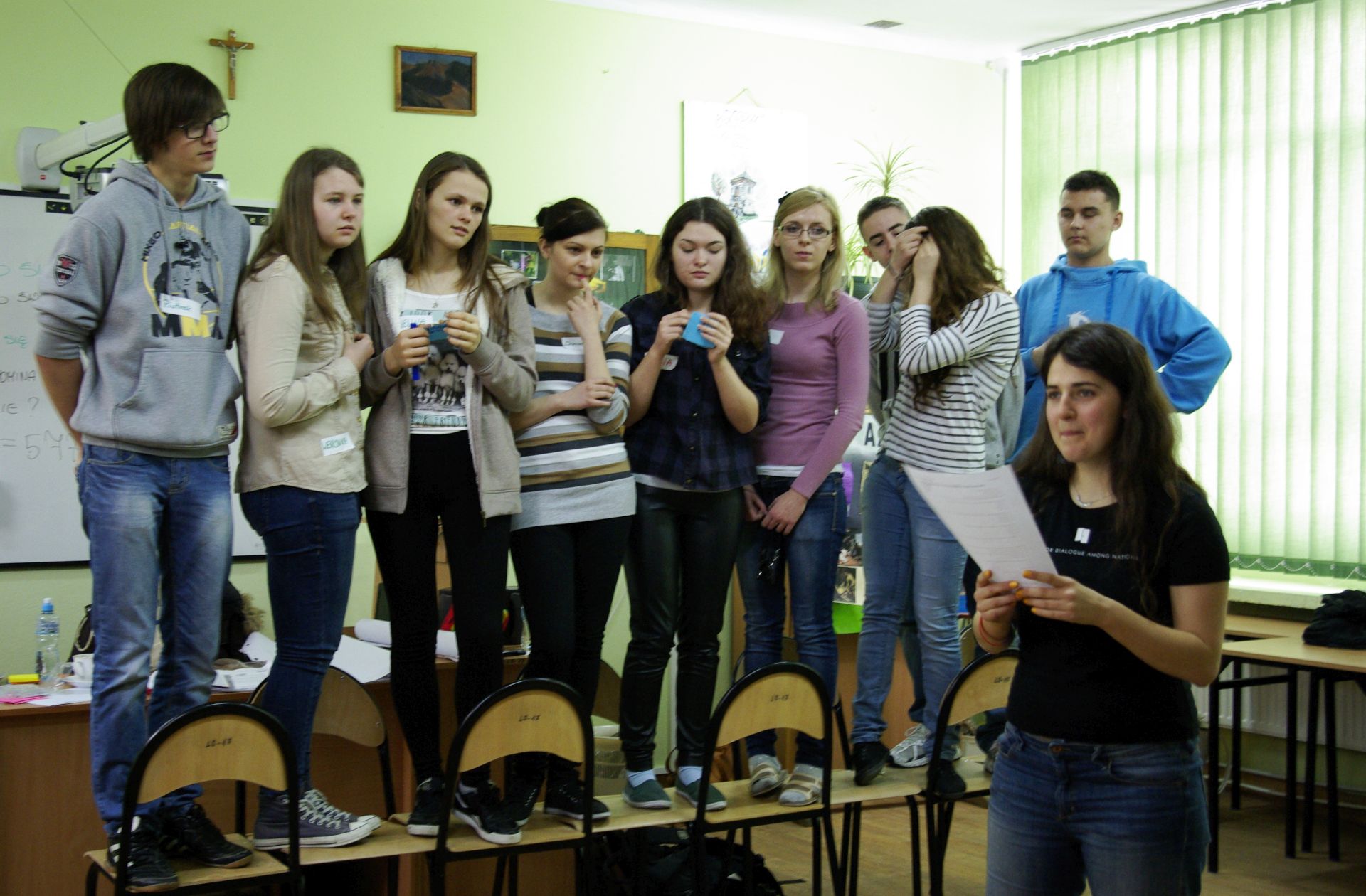 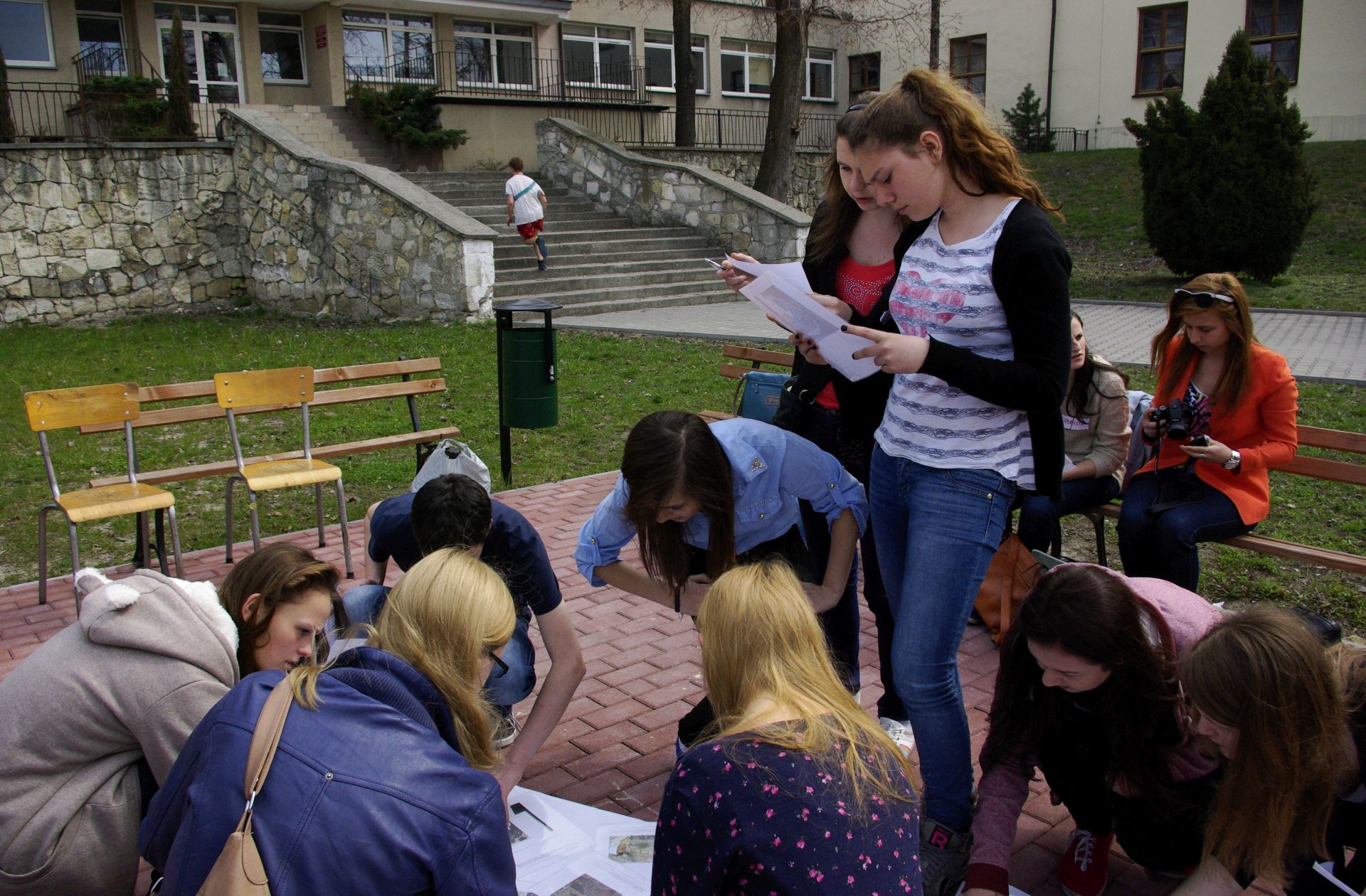 “Each of us extremely improved their knowledge, we realized that our home town had such a great history and we agreed upon the statement that “The grass is always greener on the other side of the fence” – they recall the preparations for the tour.

The event began on June 3 at 10 a.m. at the town park in Pińczów. The high school students presented to younger students from junior high photographs depicting Pińczów during the interwar period. The forgotten spots in the town and the already non-existing buildings, presented on the old photographs, raised interest also among adult residents of Pińczów. Among the hanged photographs of Jews from Pińczów, two easels were placed with an inscription on paper “You can also be a part of history”. The people from Pińczów who observed the game could write on them. “It is wonderful that young people cultivate the memory of former citizens of Pińczów”, “We feel that we are inseparable of our town and its history”, “One should know the history of its town, country. Well done for the initiative” – they wrote.

One of the high school students, Nicola Bębenek sang a Jewish song “Szema Israel” in a beautiful voice, and then the competition of the location-based game for the gathered students began.

Each point of the game following the footsteps of Jews from Pińczów involved the task to be done. The organizers made sure to make the game interesting and dynamic so participants could await many riddles and quizzes. The game started at the market square, where formerly many Jews lived. The other stop was a town library where high school students introduced the activity of the Jewish Society “Tarbut”, and the tour participants had to find a Yiddish version of a poem “Lokomotywa” by Tuwim. Another stop was at the site where a mikveh once was. There, students told the gathered participants about the laws of ritual purity in Judaism. Near the town’s hospital, students talked about the famous Jewish doctors who worked in the Order’s Hospital. The next to last point was at the site of the Vocational School where previously the Jewish cemetery was located. The last point of the game was the main hall of the synagogue in Pińczów, where organizers and participants commemorated the memory of the local Jews killed during the war.

The town, which for me was the place where I learn, do shopping, showed me its other old face. I realized what these people had to experience. I examined the issues which I would never challenge. The history of Pińczów should not be underestimated, even though nobody talks about it.