Students from Ruda Śląska decided that their project should include restoring the memory of the local synagogue. There is little information about the Jewish community in Ruda Śląska, but still – little is better than nothing. Ruda Śląska was founded in 1959, by uniting two cities: Ruda and Nowy Bytom. In the past, each of the two districts developed as an independent village, therefore there are no close links between them. First mentions of Jews in the area of Ruda Śląska appear in the first half of the 18th century. The biggest concentration of Jews was in the Wirek district, where an independent branch of the Kehilla, authorized to celebrate religious ceremonies, was established in 1862. In 1891, in the center of the industrial district (now: 5 Kupiecka Street), a grand synagogue was built, with administration buildings for the Kehilla. The Jewish community had 74 members at that time.

After the division of Upper Silesia, the Wirek branch of the Kehilla remained on the Polish side. In 1922, Moritz Perel became the head and president of the Jewish Kehilla.

Jews constituted only a small part of the city’s population. The history of the Jewish inhabitants of Wirek ended when the German army entered the district in 1939 – they were most probably taken to ghettos in various cities of Zagłębie Dąbrowskie.

There are hardly any material remains of the Jewish community in Ruda Śląska. Due to the lack of photographs and documentation, the Antonienhütte (Wirek) synagogue is one of the most mysterious and historically unrecognized religious buildings connected to the history of the local Jewish community. The beautiful edifice did not survive the Second World War – it was destroyed in 1939. All that remains of the synagogue are its presumed foundations – today there a parking lot exists in that place. At the beginning of 2013, the book “Synagoga w Wirku – Ocalona Pamięć” [The Wirek Synagogue – Remembrance Saved] was published. The project was realized by its authors, Barbara and Adam Podgórscy. 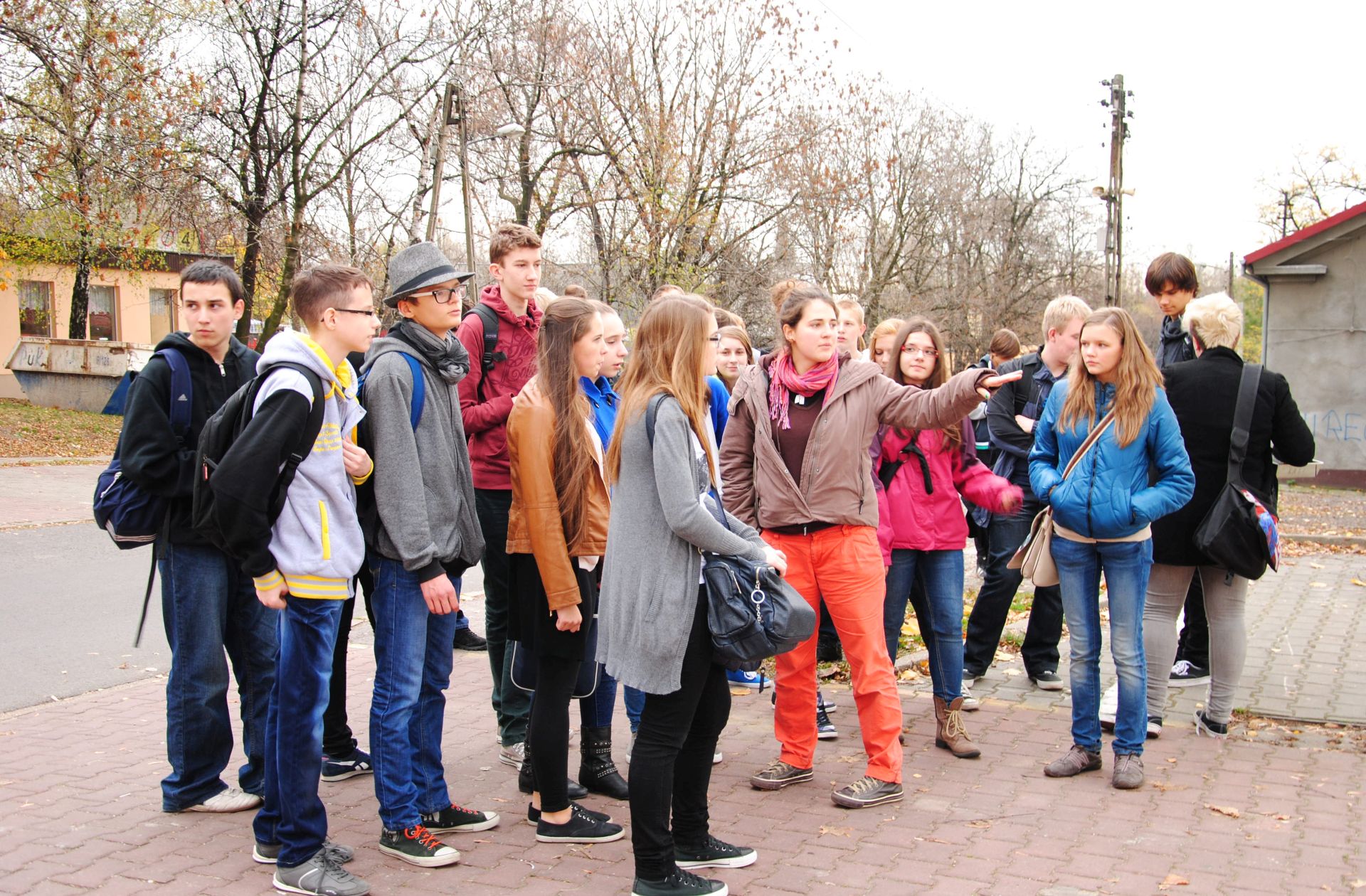 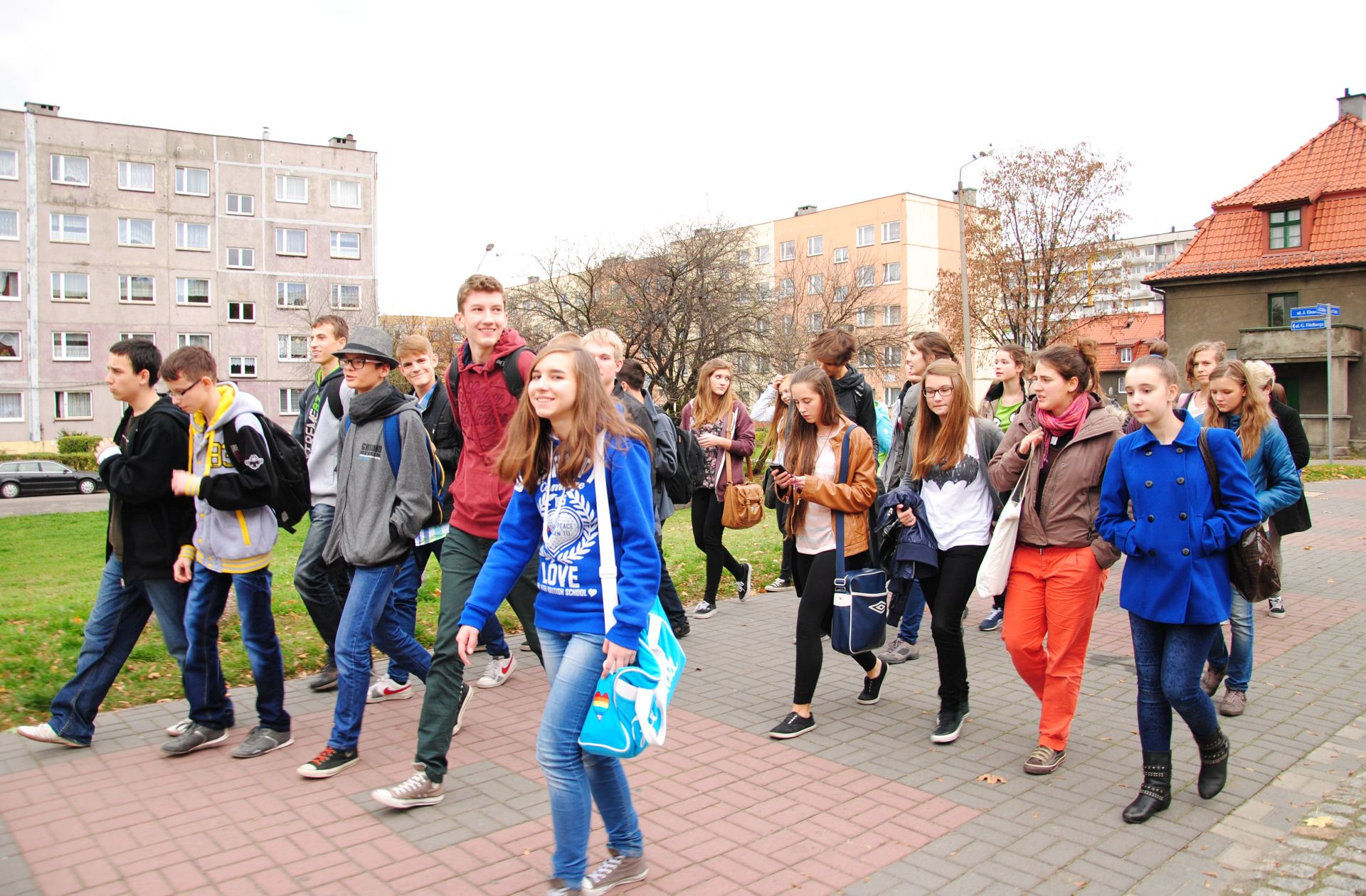 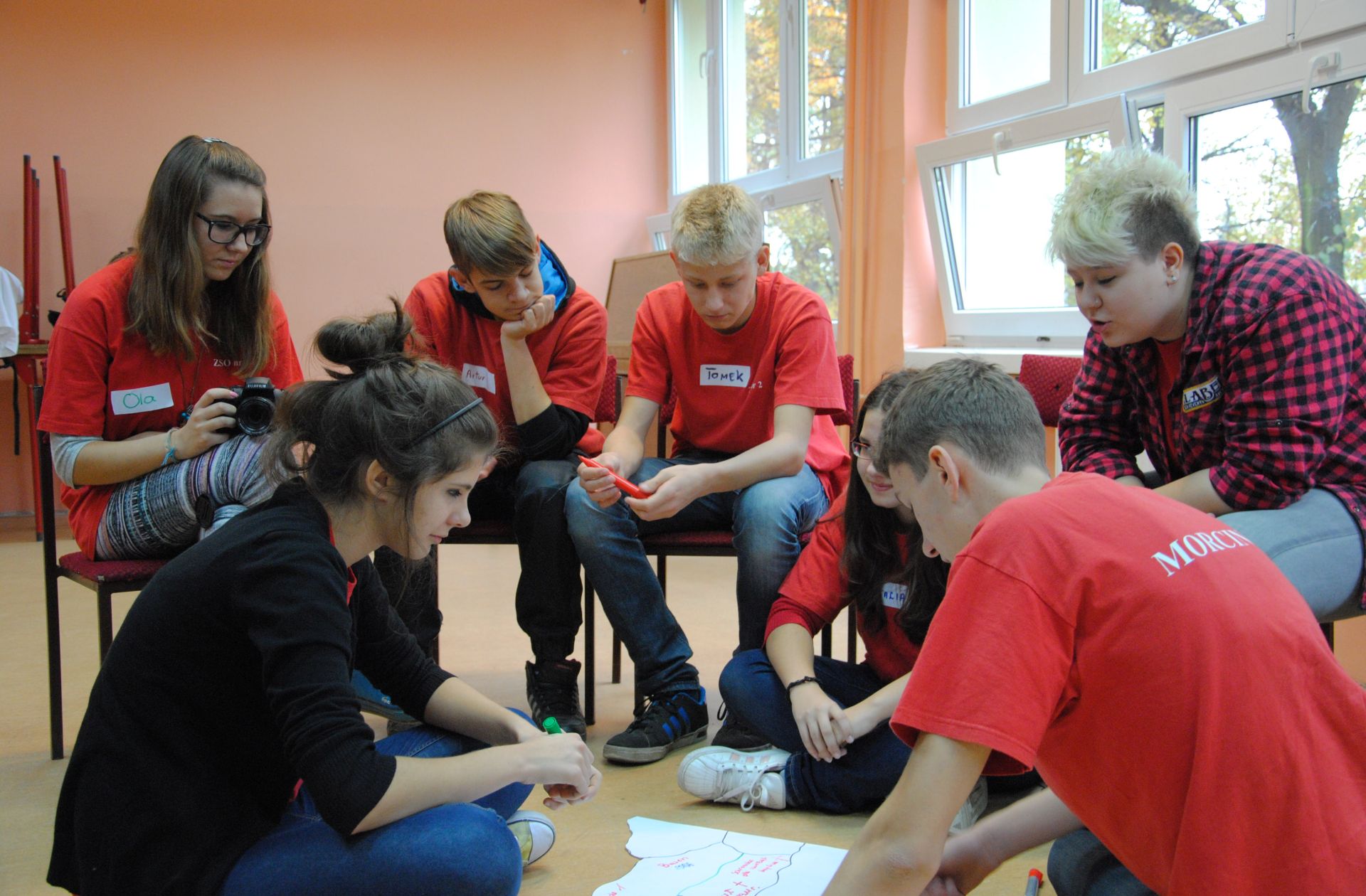 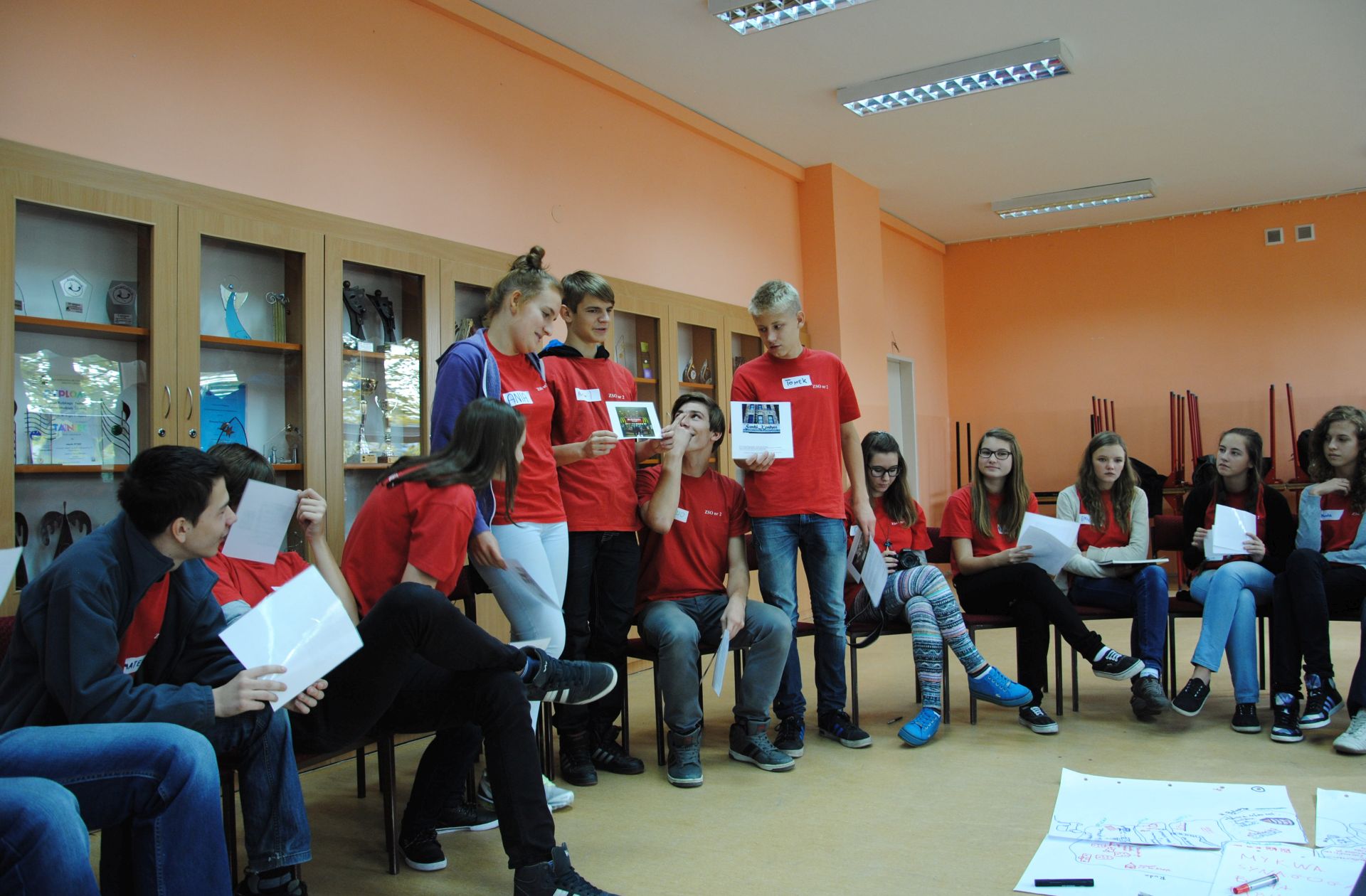 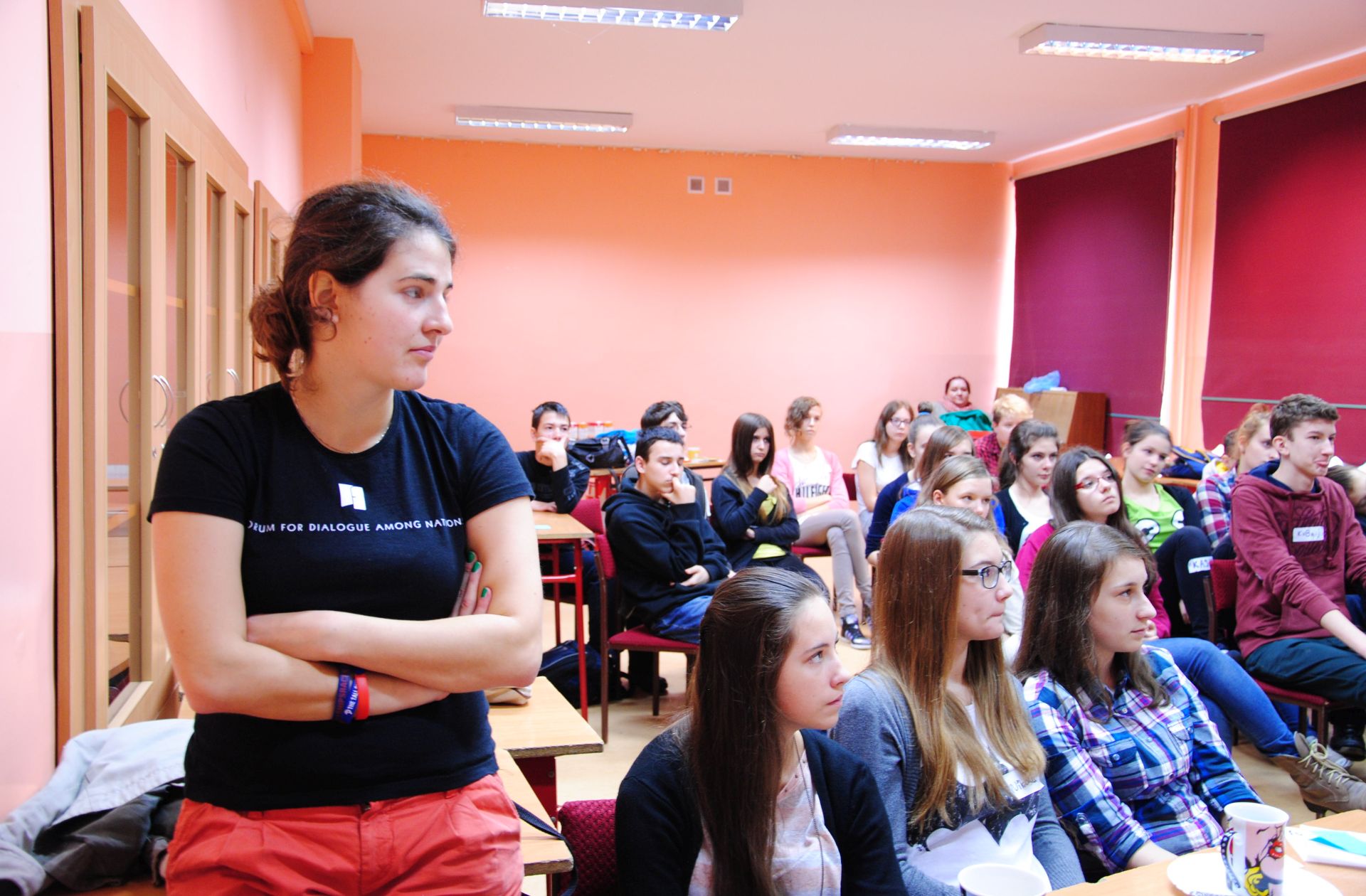 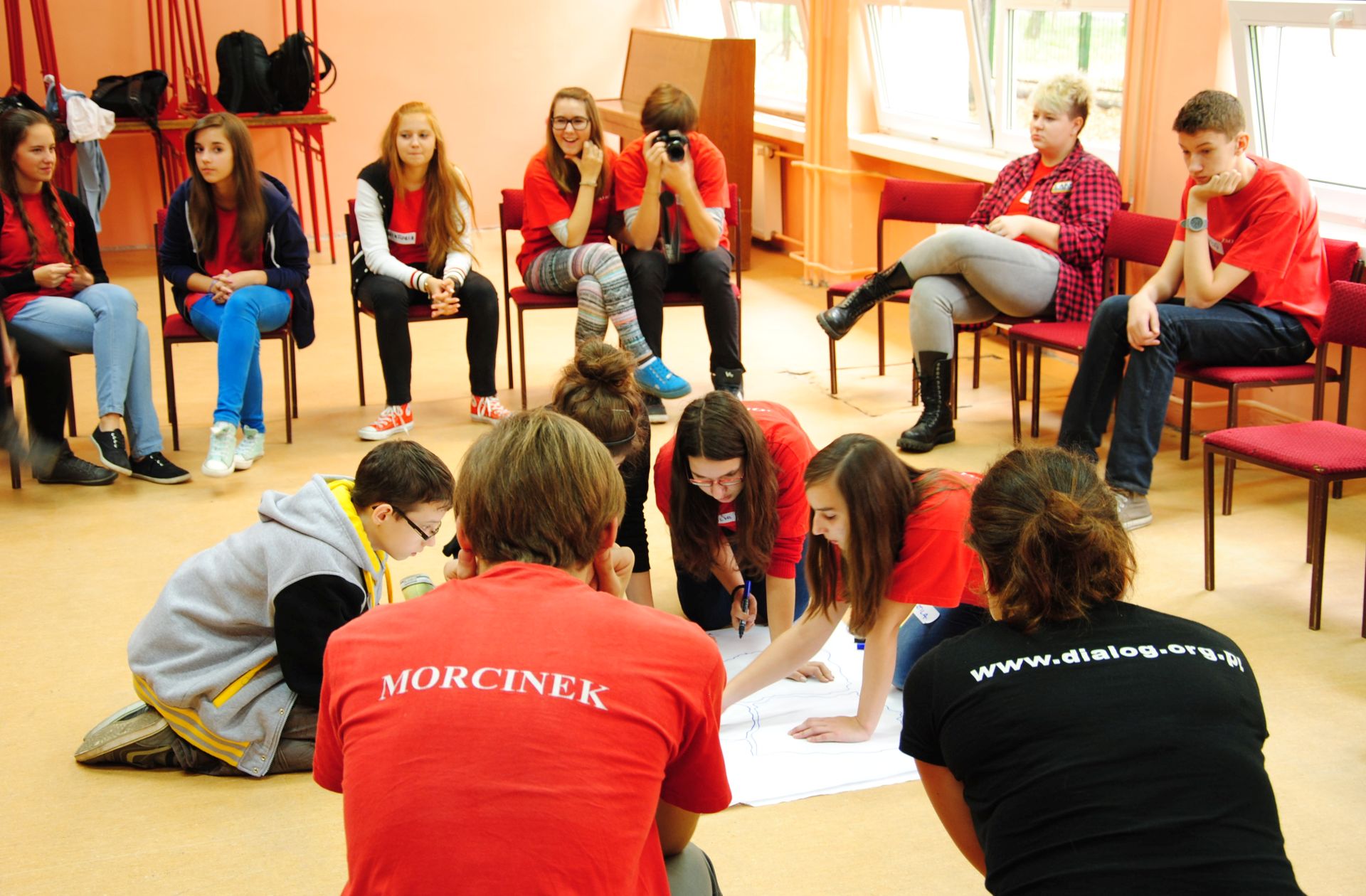 A temporary commemorative plaque, indicating the place where the synagogue used to stand, was unveiled during the tour organized by the participants of School of Dialogue workshop. It was placed under another plaque which is a part of the Historic Technology Route – a very popular local tourist route. The project prepared by the students included a walking tour, a school play, a tour following the Technology Route, the unveiling of the commemorative plaque and a ceremony on the site of the synagogue – the students spelled out the word Pamiętamy [We Remember] with candles. They also collected signatures for a petition to build a monument in the place where the synagogue was located or place there a plaque commemorating the Jews from Ruda Śląska.

The whole class was involved in organizing the tour for the competition. A traditional walking tour was combined with a play performed at the school; the events concluded with the unveiling of the commemorative plaque and a happening. Both the school play and the happening included violin interludes. Also, the organizers and performers wore folk clothes or historical costumes from the interwar period.

Considering that the students combined various artistic elements and managed (with the help of their teacher) to involve a large group of people in their activities and to persuade the local authorities to unveil a commemorative plaque, one can regard the tour and the accompanying events not only as exceptionally ambitious but also as adequate to the town’s needs and means. The project was documented and summed up by a film and a photo album.

It is necessary to emphasize the involvement of so many various social groups which constitute the local community of Ruda Śląska. The guests of the tour included members of the local authorities and of the Katowice Jewish Community, representatives of the town council, young people from all over the town, members of cultural heritage organizations and local inhabitants living close to the synagogue. 177 people participated in the tour and the march to the site of the synagogue – this impressive turnout may hopefully lead to a commemorative monument being erected there sometime in the future.

This workshop gave me food for thought. (…) I had the opportunity to learn about the life in my town in the past. I met a person who devoted her life to researching the Jewish history. The classes taught me teamwork and cooperation.

Tolerance is very important. All people are the same, no matter what their religion, skin color or language. One should remember to be tolerant, because otherwise man is wolf to man.

In my opinion this workshop is necessary to preserve the memory of those people, so that we may learn to be tolerant towards other nations. The girls taught us a lot. I am grateful that thanks to them I am able to look differently at Jews and other ethnic minorities in my neighborhood.

After the workshop I changed my mind about other cultures. Tolerate others and they will tolerate you.

School of Dialogue program in Ruda Śląska was made possible by the support from TRISHIA and FRED MARGULIES.