School of Dialogue at High School Complex No 1

In the 15th century the Jewish community in Sieradz, a city in the modern Łódzkie province, was one of the biggest in the Greater Poland region. Jews lived primarily on the southern side of Żydowska Street. We do not know a lot about them. Then some of them, most notably Jakub, Bieniasz, and Samuel of Gniezno, started buying houses in the Christian part of the city. However, they still did not form a very big group; sometimes there were more of them, sometimes, less, depending on the bans, orders, permits, and limitations.

Jews started to come to Sieradz in greater numbers only after the third partitioning of Poland of 1795. Those were the Fajanses, the Bomses, and the Rosenbergs, the Białks, the Kempińskis, and the Sonenbergs, the Monics, the Muners, and the Diamants. Jews established their own cemetery and built a synagogue. Their businesses included primarily the cloth, salt, iron, and footwear trade; then they were tailors, glaziers, cobblers, and hackney drivers. At the beginning of the 20th century they opened a school for Jewish children.

They were singled out for killing from the very first days of the World War II. The most brutal of the killers was supposedly one Gerle. He would take several Jews to the cemetery at the same time and kill them with a shot to the backs of their heads. However, he would always leave one alive to bury the others.

The ghetto was established in 1940 between the Sukiennicza, Wodna, Szewska, and Żabia Streets, and initially it housed 2,000 people, but the number increased later when more Jews from neighbouring villages were brought to it. Like in all other ghettos, here too food was scarce. Twice a day they had to gather in Zamkowa Street to be counted by Germans with Jewish police. They were all gathered in that spot in August 1942 and then transported to an Ursuline monastery, only to be taken to Chełmno on the Ner River a few days later where they were all murdered. None of them returned to Sieradz. The only remains of Jewish life surviving to this day include the synagogue in Wodna Street and fragments of a few headstones. Some of them can be found in the Museum’s courtyard.

To find more information, the students from one of the high schools in Sieradz contacted the local regionalist and historian, Mr. Jan Pietrzak. They also visited the library, the District Museum, and the State Archives in Sieradz. They looked for information in the local newspapers and on websites, and they managed to find quite a lot. Prelate Marian Bronikowski was invited to the last workshop conducted by the educators from the School of Dialogue; it is thanks to his initiative that Sieradz celebrates Judaism Day each year. He told the students the origins of this celebration, why it is held and why it should be organised. 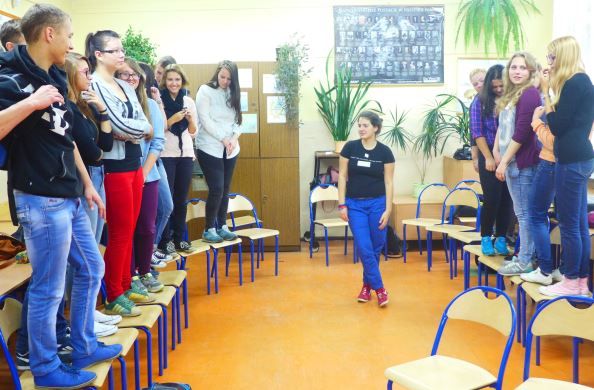 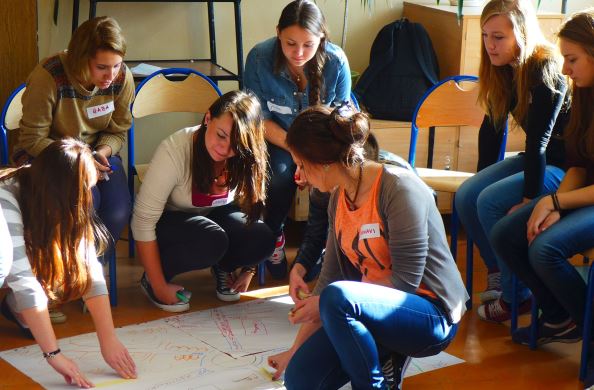 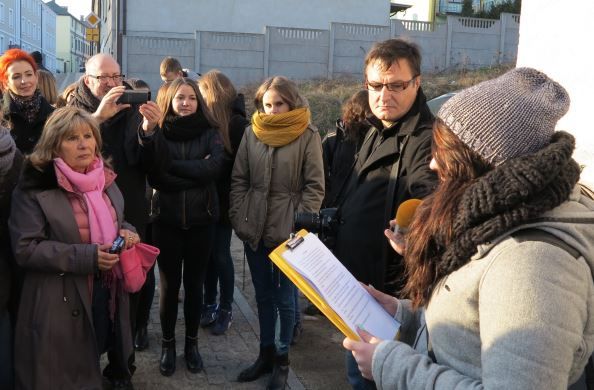 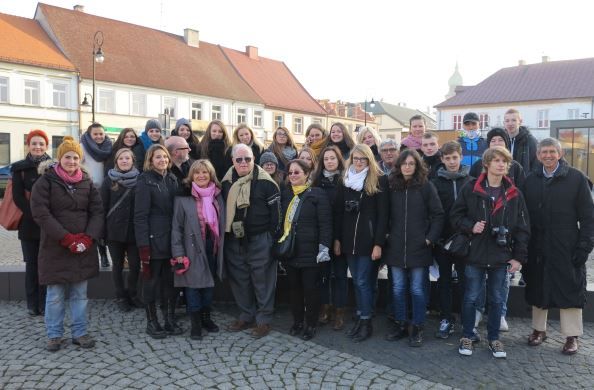 He also told them what was happening to the Jews during the war, the fate that they met, and why we should sympathise with them.

Having collected all this information, read the reports, discussed and contemplated the topics, the students prepared a tour for guests from Israel, Australia, and USA, including Mary Slade whose family has links to Sieradz. For the guests’ arrival the students prepared a small exhibition in their school, presenting pre-war photographs from the ghetto and the cemetery as it is now. There were also drawings and paintings about Judaism, Talmud, Torah, Jewish outfits, and holidays.

Then they went to the house of Ary Sternfeld, a Jewish cosmonautics prioneer. He calculated the orbits of artificial celestial bodies, rockets, and satellites. He is buried in Moscow, in a cemetery for distinguished persons. Then, they went to 4 Wodna Street where the former synagogue stands, they visited the Sieradz ghetto, and the roll call square. Next, they returned to the city square, to the District Museum which used to house the Jewish shambles before the war. They also visited the Ursuline Church, from which the Jews were transported to the camp in Chełmno after the liquidation of the ghetto. Finally, they reached the Memorial Wall, with plaques commemorating Sieradz Jews murdered during the war. There, father Marian Bronikowski waited for the guests to take them to the parish garden where they planted a tree together. Next to the tree they put a plaque commemorating the Jewish inhabitants of Sieradz who lived in the city next to its Christian population for years, and then were driven out of it and murdered.

Then the group returned to the school where they received gifts and everybody said their farewells, some in tears, but everyone was really moved.

A few days later these same students organised a location based game for their fellow students who got the best scores in the contest “The History of Jews in Sieradz”. With the routes defined, teachers involved, the presentation prepared, and the tasks ready everything was in order. Everyone met at 8 AM in the School’s Tradition Chamber. The students discussed the School of Dialogue, its goals, values, and program with the location based game’s participants. They also spoke about the foreign guests, the need for integration, and the struggle to remember, which is so important. They discussed the Jews’ history in Poland and around the world, their situation as it used to be and as it is now. Later, in the city square, they discussed the history of Sieradz Jews from the 15th century all the way to World War II. Then the groups went their own ways, but shared a common goal. They went to the synagogue, the former ghetto area, the roll call square, the Ursuline monastery, and to the cemetery. In each of these places someone waited for them with a story to tell, with tasks to complete, with riddles, quizzes, and questions.

Finally, they all met once more in the Tradition Chamber. There, the students talked, discussing their thoughts and conclusions. They talked about stereotypes and how to overcome them, about the need to get to know and try to understand each other. And that in the end everything rests on them.

Projects like this make sense and are necessary to get to know the history of the people who lived here before us.

Initially, I approached the topics discussed during the workshops without much enthusiasm, but now I see it all in a different light. I don’t see it as something that doesn’t concern me, but rather as a fragment of my own history.

Thanks to these workshops I learnt a lot about my city, because I actually knew nothing. I learnt its true history and the history of its former inhabitants – the Jews. I’m kind of grateful.