School of Dialogue at Adam Mickiewicz Bilingual High School No 2

Słupsk is located in the Pomeranian Province and has around 92,000 inhabitants. The first Jewish family is believed to settle here in 1705. Before the World War II, Jews constituted only 0,5% of the population, over 270 people. Despite the small number of Jewish inhabitants, students taking part in the School of Dialogue program managed to get to many commemoration places of the prewar neighbors.

The students acquired new knowledge during workshops and additional meetings organized with the help of their project leader. They invited Ryszard Kwiatkowski, deputy president of Słupsk, to their school. The guest introduced them to the history of Jews from Słupsk, he described how he had discovered his roots and what actions were undertaken to commemorate the Jewish community. The young people also met with Marcisław Machura, deputy principal. The teacher told them about non-existing Jewish cemetery. In the 70s, he photographed the matzevot that were still present there.

“Our group organized the walking tour project, during which we try to introduce basic information about the Jewish culture. We also try to show other students that the memory about Jews of Słupsk will last forever,” one workshop participant recalled. The students invited their fellow students from another grade. They prepared the map of Słupsk for them and marked places connected to the Jewish history of the town. In addition, they prepared another map indicating the location of the concentration camps where the Jews of Słupsk were deported to. They also printed photos showing buildings that do not exist anymore. The walking tour participants could also consult a mini-dictionary that the students prepared to explain some of the most important terms of the Jewish culture. The seven kilometers walk also included the main place of commemoration. At Kołłątaja Street, the youth stopped by the monument with a plaque commemorating the inmates of the concentration sub camp of Stutthof. Next, all the participants went to the Deotymy Street. 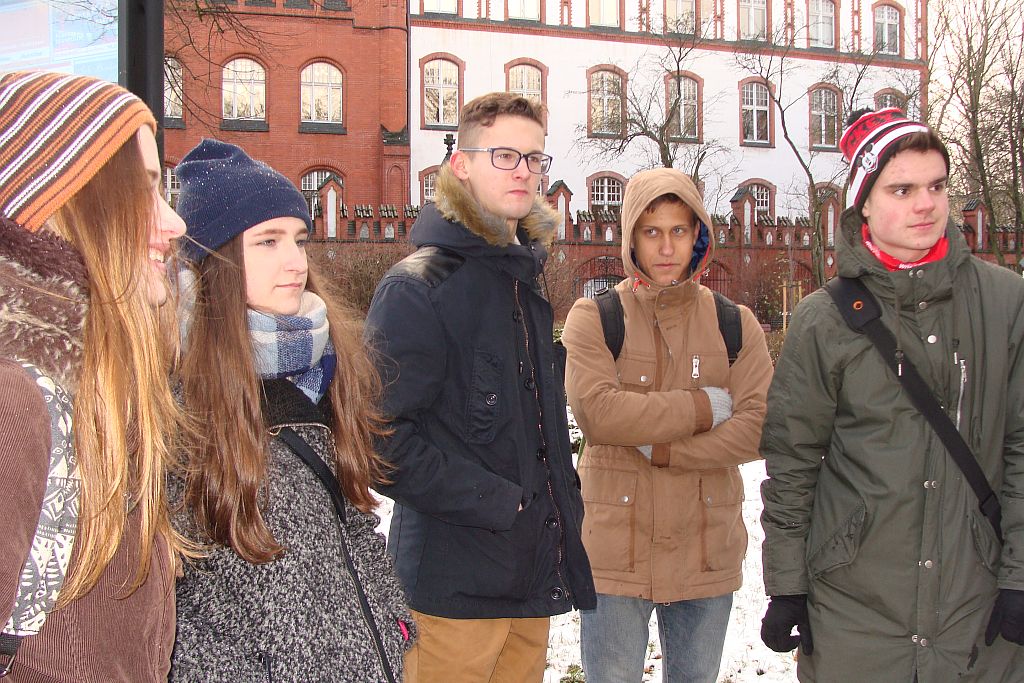 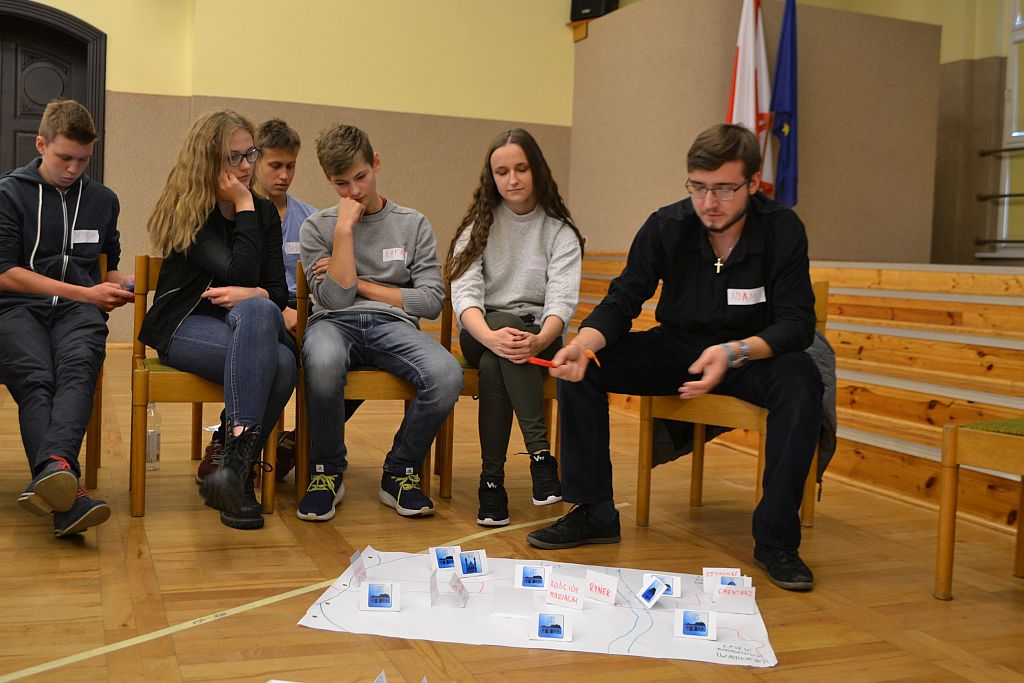 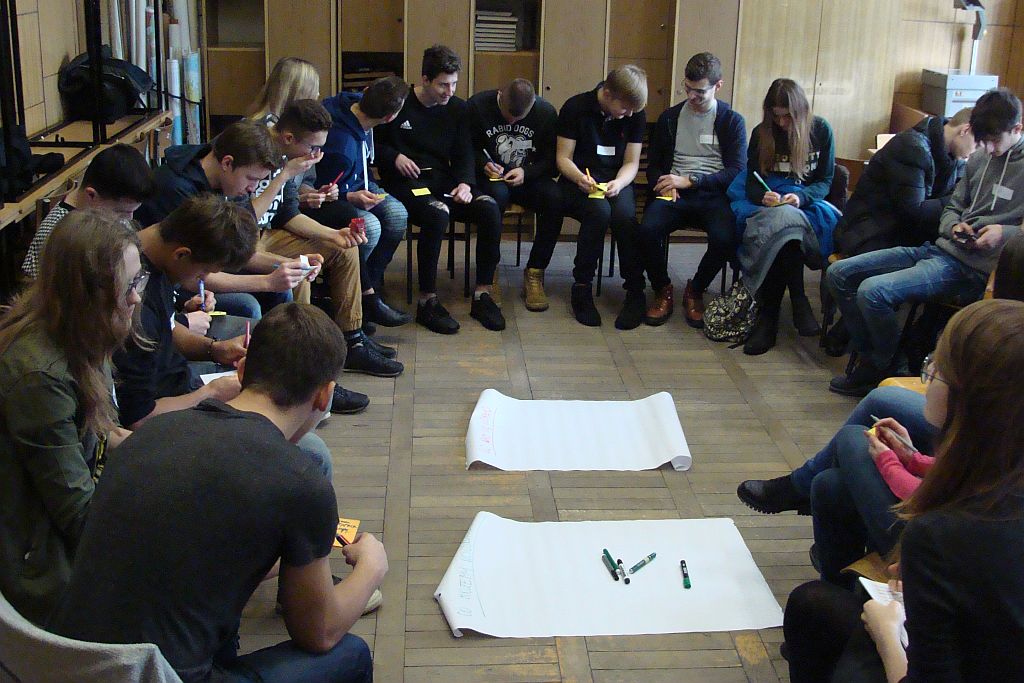 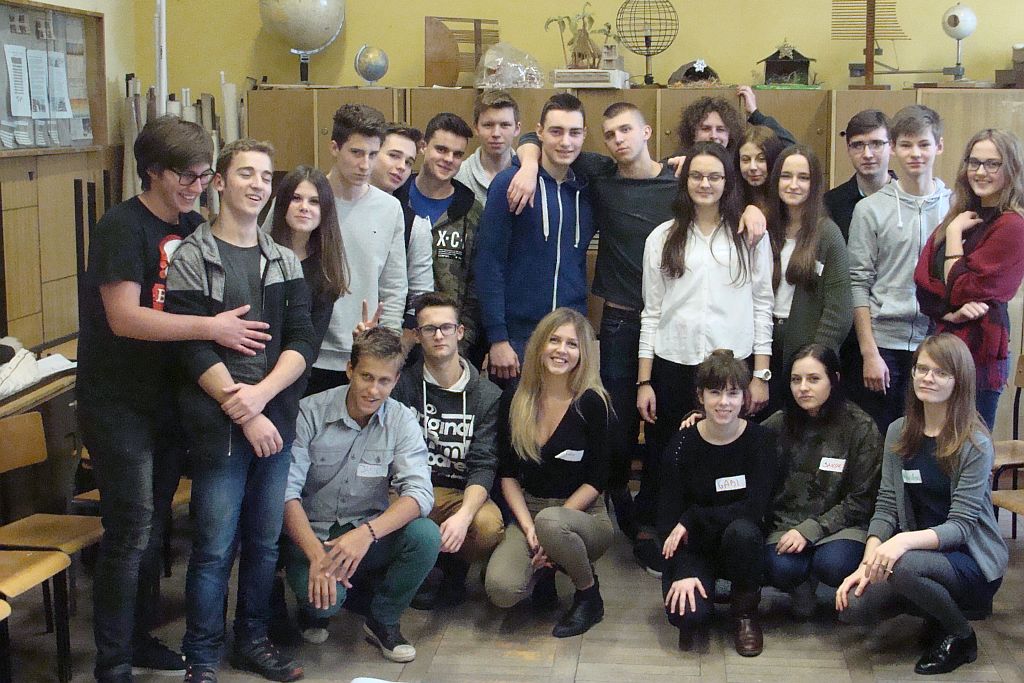 Here, in 1942, the Jews were detained to be later transported to Auschwitz. The students listened to the recollections of Isabel Sellheim, who was the initiator of putting the commemorative plaque there. The next stop along the route was the house at Lutosławskiego Street. Before the war this building served as Raphael Woff Care Home. The high school students presented here the life of this Jewish merchant. In the park near the Town Hall, the youth saw the monument “Open Head” by Otto Freundlich. This Jewish painter and sculptor was one of the first representatives of the abstract art. Next, they all went to the square market where the guides told them about the Jews who had lived here before the war. At the next stop, at Rabbi Max Joseph Street (named after the last rabbi of Słupsk), the participants could listen to the history of the preburial house and the Jewish cemetery which existed here before the war.

At Niezdziałkowska Street, the students presented the history of the Jewish community house and the synagogue. Today a piece of a wrought fence that before the war surrounded the synagogue, is placed here. A plaque commemorating that place and its Jewish past is hanged on the wall. The last stop of the tour was the townhouse where the rabbi Max Jospeh had lived.

The high school students did more than just the walking tour, and organized a survey. At one of the main streets of the town, they asked questions to twenty random people about the Jewish culture. They concluded from it that young people knew the least. They repeated the survey among the walking tour participants. They also made a report from their research.

I think that history is a very important aspect of our life. It is worth to remember what once was. No one would like to be forgotten!

When acquiring this knowledge I felt happy that I could learn at least little and realize how the Jews lived here.