School of Dialogue at Vocational Technical High School No 6 of Graphics, Logistics and Environment

If you know how to look, you will see them. Menorahs in balcony railings, a sukkah on top of a tenement house, the gate to the former synagoguge. Through Cukerman’s Gate Foundation (Brama Cukermana) project “Wholesale” even those without a knack for history can learn that before World War II Rosenfeld had a bakery in Sosnowiec, Hochman – a shop with accessories, Altman – a glass, earthenware and porcelain depot, while Buchbinder made cases. Plaques with names of prewar – predominantly Jewish – shops have been places on tenement houses in the center of Sosnowiec (but also in Będzin and Dąbrowa Górnicza), serving as reminders of the town’s Jewish past.

The biggest number of traces of Sosnowiec Jewish community can be found at Modrzejowska Street. Modrzejów was once Sosnowiec’s Jewish district, with first inhabitants settling there in the 17th century. Their numbers grew over time. Soon, they were able to create an independent Kahal, establish cemeteries, build schools and synagogues. In the early 20th century many Jewish charity organizations and cultural associations functioned in Sosnowiec; there was also a Jewish hospital, high school and library. In 1921 Jews accounted for circa 15% of the local population. In 1940, Silesian Jews began to be deported to Sosnowiec as reserve workforce.

In 1941 the town was inhabited by over 27 thousand Jews. One year later they were deported to Auschwitz Birkenau, and the remaining 14 thousand were placed in ghettos in Środula district and in old Sosnowiec. Most of the buildings connected to Jewish spiritual and cultural life were destroyed. However, among remaining traces of Jewish community are three Jewish cemeteries, two secondary school buildings, and buildings of the former cheder, orphanage and Kahal community building. “We did not imagine that what we learn in class or during preparations of the walking tour will become such a tangible reality so close to our hearts” commented students who participated in the School of Dialogue program in Technical School No 6 in Sosnowiec.

In the course of the workshops led by Forum’s educators students had the opportunity to gain information about Jewish customs, culture and religion. They participated in heated debates on topics connected with multiculturalism and diversity. They became fascinated by the Jewish cemetery, admitting that although they were aware it existed, they had never visited before. During the visit at the cemetery with Forum’s educators they deciphered symbols from the headstones and admired the reliefs. 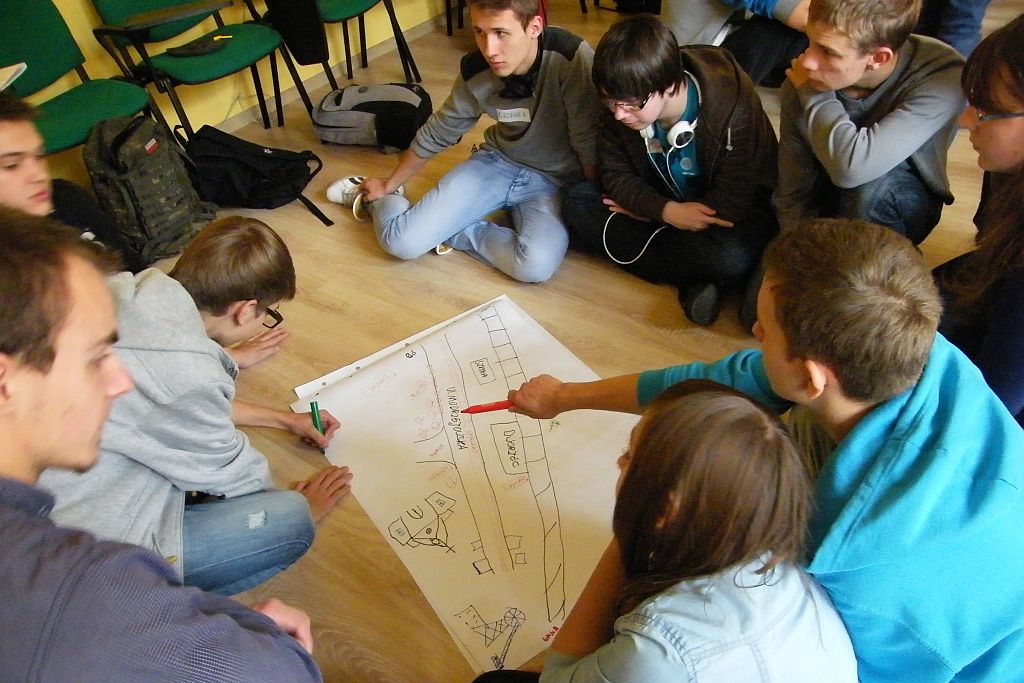 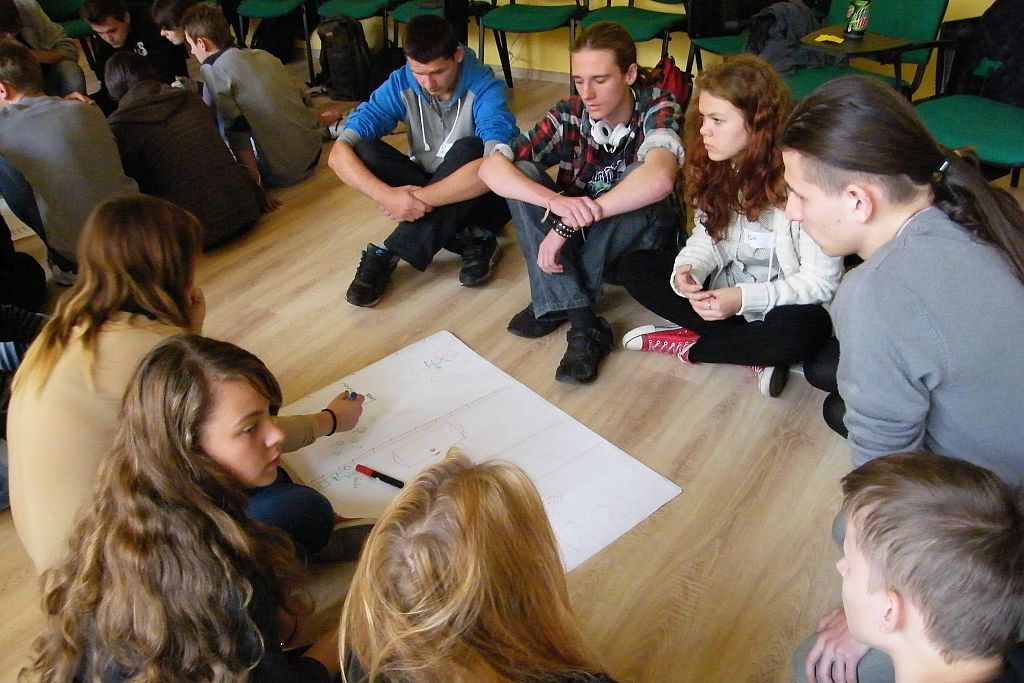 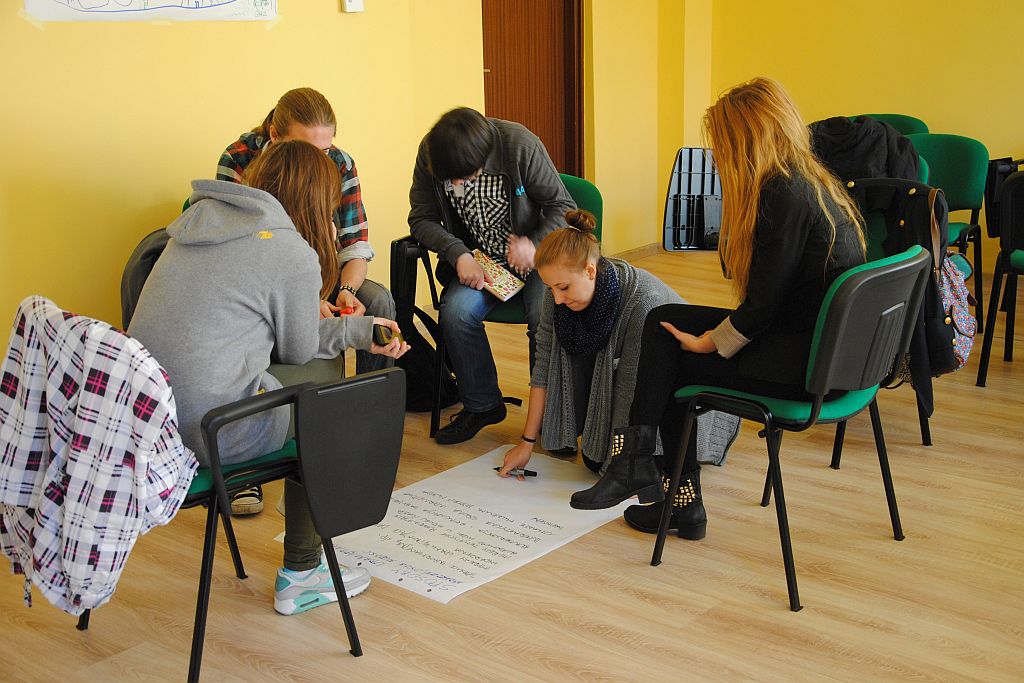 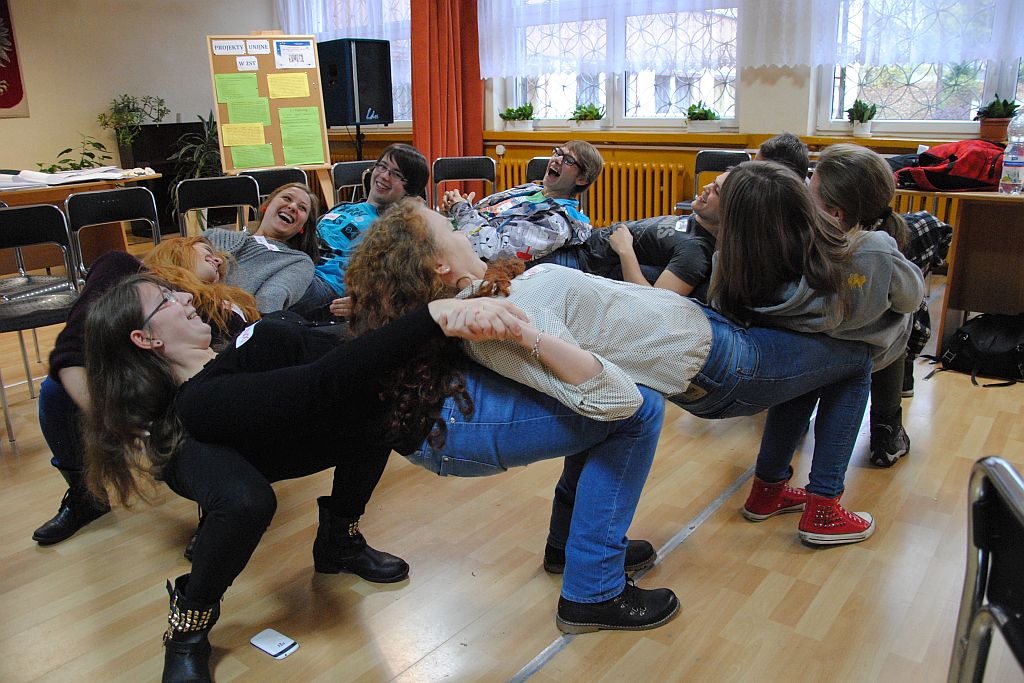 During the subsequent workshop, students met with historian dr Sławomir Witkowski who works at the Humanitas College in Sosnowiec. Sławomir Witkowski told them about his academic interest in Jews from Zagłębie, suggested a number of information sources and mentioned his inventory work at the Jewish cemetery. To prepare a tour of Jewish Sosnowiec, students relied on books, the internet, but also their grandparents’ reminiscences. Basing on the information they gathered, they prepared a flyer with a route to Jewish heritage and memorial sites in Sosnowiec.

“The tzaddik’s house, Władysław Szpilman’s birthplace, Pogoń cemetery – these are just some of the sites of the trip into a completely new world” wrote students in their project summary. The walking tour held on December 3, 2013 was the students’ own work, from start to finish. The walk began in front of ‘Helios’ movie theater, where a plaque commemorating the town’s murdered Jews hangs. Next, the group headed to Modrzewska Street, which used to be the heart of local Jewish life. Students talked about the house at number 31, which once was home to “Nordyja” Jewish Sports&Gymnastic Association. The Jewish Women’s Association for Providing Relief to the Poor – women in puerperium, children and sick poor people. Right next door at no 22 is a shop selling funny gadgets, which used to house a beit midrash, a Talmudic school and a Talmudic library.

A bit farther on stands the house at 21. This was the location of Izaak Markowicz’s pastry shop. At no 11 Zozensztejn would serve warm drinks in his teahouse. The same building was home to Mizrahi all-male beit midrash. And at number 16 – wine, liquor and vodka depot owned by Adler and Fuks. The list could go on: at number 10 – Pinkus’ weaving accessories, at number 6: hats, handkerchiefs and ties from Plawner, at number 4 – Gidkorn’s jewelry shop, at number 2 – Kugelman’s shoes. The group turns into a side street: Dekerta Street. This used to be the location of the Great Synagogue that was blown up by Germans during World War II. Nowadays, the site is occupied by market halls. Not far from here, in one of the back houses at Targowa Street, on the second floor was where Władysław Szpilman was born. Another well-known Sosnowiec resident is opera singer Jan Kiepura – the group heads to see his monument. The final stop is the Jewish cemetery. Tour participants examine the surviving headstones, while students explain the symbolism behind the reliefs.  The project does not finish with a finished tour. Students talk about their plans: “We are currently negotiating organizing an exhibition in the City Hall; after all, our project also promotes the city. During study halls we promote our own work and explain with great enthusiasm what we managed to discover. The knowledge we pass on is supplemented with brochures with photographs, a film and a blog created specifically for this purpose.”

Through these workshops I got better acquainted with Jewish culture, traditions and history … I wasn’t aware that there are so many traces of their presence left in my city, such as the gate of the synagogue and the cemetery. I gained new information and deepened the knowledge about my hometown, but also I changed my opinions and point of view on certain topics.

I had no clue about Jews, especially those from Sosnowiec, but this project changed a lot for me. Over the course of these two days we learned the basics about Jewish culture, namely the traditions, rituals and how Jewish holidays are celebrated. It was a wonderful experience.

Jews have been a taboo topic for me. Perhaps due to lack of knowledge about them by those around me, as not many people are interested in their nation’s past, let alone that of others. However I learned many things and drew my own conclusions thanks to the fun way in which the workshops were organized and through games and group work.

School of Dialogue program in Sosnowiec was made possible by the support from AMTRA LTD.