School of Dialogue at Maria Konopnicka Junior High School No 16

During spring School of Dialogue workshops, Forum for Dialogue educators – Katarzyna Niewczas and Karolina Jastrzębska-Mitzner – presented students with photos of prewar Sosnowiec; what it looked like and how it may still be remembered by some of their grandparents. Students learned about differences in Catholic and Jewish holidays, between Easter and Pesach. They discussed topics like the Holocaust and culture of contemporary Israel. Together, they tried to figure out what form their final project for School of Dialogue would take and what route to choose for their walking tour. They asked themselves who should remember about Jewish Sosnowiec  – perhaps this should be their obligation?

Sosnowiec is the largest city in Dąbrowa Basin (Zagłębie Dąbrowskie); its name comes from  pine (pol. sosna) forests growing in the area before 1830s. Jews began to settle in Sosnowiec fairly late, i.e. only in mid-19th century. The first to come was most likely Abram Blumental, who moved to Sosnowiec from Modrzejów in 1859. He erected the first brick building in town, right next to the customs office. Jews that would arrive in subsequent years would settle closer to the train station.

For a considerable time, Jews of Sosnowiec lacked their own Kehilla or cemetery; they would bur y their dead in nearby Będzin. A separate Jewish cemetery was only established in Sosnowiec in 1893, when the plague epidemic reached the town. By 1896, construction of the Great Synagogue at Policyjna Street was complete; two years later, a Kehilla was formed.

Sosnowiec teemed with Jewish life. Both Zionism and the Jewish workers’ movement existed in the town; members of the latter participated in organizing first strikes.

During the 1905 revolution, Jewish youth joined the protests and between 1906 and 1908 Poalei Zion and Bund were established. In 1915, Jews of Sosnowiec opened a modern high school and one year later – a library named after I.L. Perec. Zionists organized meetings and debates, Maccabee organized the sports life and Agudat Israel was established; some of its members would sit on the city council. Things would get turbulent.

In 1903, during Rosh ha-Shana celebrations by the riverside, Polish workers threw rocks at local Jews. The police intervened, but no serious harm was done. In July of 1911, another group burst into the synagogue filled with praying Jews. They had been told a Catholic girl had been kidnapped.

Germans entered the town on September 4, 1939 and murdered 30 Jews in the first organized executions. On September 9, they burnt down the synagogue at Dekerta Street. ‘Dulag’ transit camp was created for those, who would later be deported to labor camps, and surrounded with barbed wire. Zwilag camp was intended for families of Jewish workers who were in hiding to avoid deportations. In 1942, a ghetto for young Jewish workers was created in the city’s district of Środula. Those who were too weak or too old were placed in Modrzejów and Old Sosnowiec ghettos. On the night of July 31, the ghetto was liquidated; that night, around 400 of its residents died fighting or trying to escape, over 10,000 others were deported. Jewish Combat Organization (ŻOB) fought despite virtually no chances for victory. Those who remained were forced to clean up the bodies and were then sent to Auschwitz-Birkenau. On January 15, 1944, the last transport headed out of Sosnowiec. 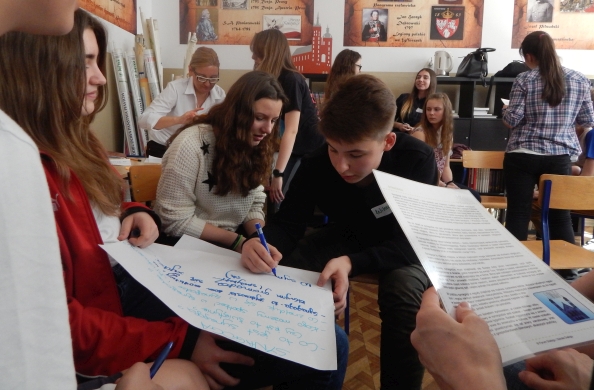 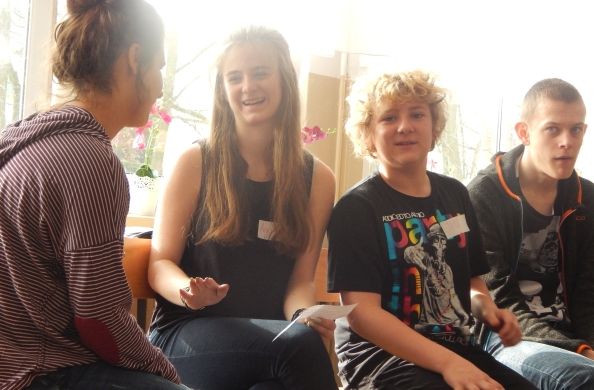 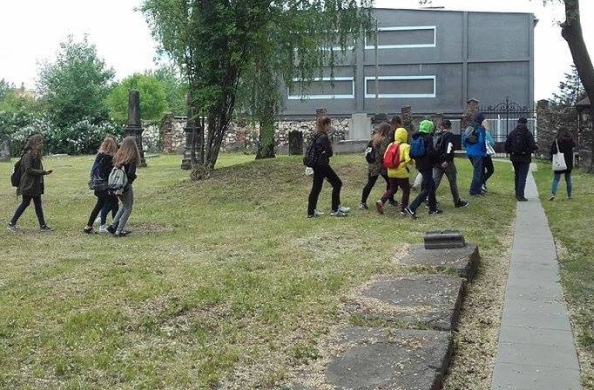 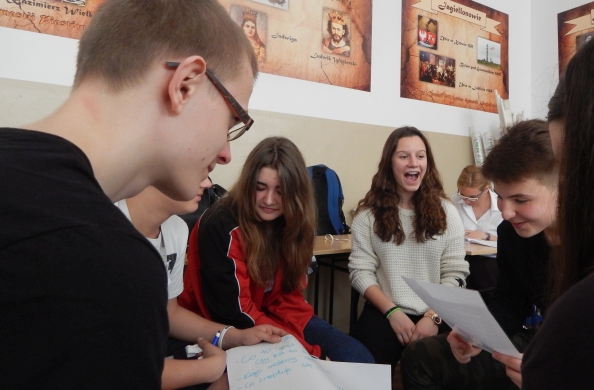 Those who came back after the war were survivors of the camps and the people who had been resettled to USSR. In June 1945, there were 2719 of them altogether, but no one settled down for good. They would continue westward or head to Palestine.

With such abundant history, mapping out a Jewish tour that would present its intricacies should not be difficult. However, none of the synagogue buildings survived to present-day; the site of the Great Synagogue is now occupied by Pepco store. The two Jewish cemeteries – administered by the Jewish community of Katowice – are in good shape, while the area of the third one, situated in Miłowice district, is used as an illegal garbage dump.

In preparation for their walking tour, students met with Sosnowiec residents and held group sessions in the local library. They spent hours meandering through the streets, examining buildings, peeking into various nooks and crannies. As a result of it all, they would create a film, a multimedia presentation about famous Sosnowiec Jews and organized a photo exhibition in their school that would later be shown at the City Hall. Students also prepared a few thousand flyers they distributed throughout the city; one of them even made it to the mayor. Walking around, they would engage in conversation with local residents, asking what they do or do not know. “Do you know where the synagogue used to stand, ma’am?” Students also participated in the nationwide commemorative action “Daffodils” to honor the 73rd anniversary of the Warsaw Ghetto Uprising. They made the paper daffodils themselves and then handed them out to passersby on the streets.

Students wanted to get involved on all levels and thus proposed to the municipality to put up a commemorative plaque on Staszica Street, the site of 1944 executions after the fall of the ghetto uprising in Środula.

Their initiative met with a positive response of the local authorities, who paid for and unveiled such a plaque. At the same time, students discussed and tried to work out a shared vision of what their Jewish walking tour would be like. To participate in the event, they decided to invite parents, other students and representatives of the local chapter of World Association of Home Army Soldiers. “A Walk Through Jewish Sosnowiec” was organized on June 10, 2016, a Friday. Students led their guests to a number of sites they considered important and symbolic for prewar Sosnowiec. First was the plaque on Helios cinema building honoring the memory of Jews murdered in the course of World War II. Other sites on the route included the building of a shopping arcade on Modrzejowska Street, an important place for everyday Jewish life in Sosnowiec.

The group also headed to the plot at 16 Dekerta Street, location of the Great Synagogue that was burnt down on September 9, 1939. A short walk away is the house where Władysław Szpilman was born; then a stop by the monument of Jan Kiepura who sang “My lips are silent, my heart sings: ‘Love me’…” The stops en route also included a Russian Orthodox church built with financial assistance from – among others – Sosnowiec Jew Adolf Oppenheim and a plaque at Mireckiego Street commemorating the deportation site from which local Jews would be sent to Birkenau.

The tour ended with a visit at the Jewish cemetery on Gospodarcza Street. The group shuffled in single file, boys were wearing yarmulkes one of the female students had sewn for this occasion. The students’ project not only presented history of Jewish Sosnowiec to tour participants, but also indelibly changed the cityscape in order to commemorate what should be remembered.

This is not just about the Jewish community, but especially about tolerance and acceptance of different beliefs of others and respecting them.

This project gave us a new perspective on many places, people and events.

I was moved by the story of the old woman who managed to emigrate to the United States. It moved me to hear her sing an old Polish song she remembered from the time she lived in Poland. I am happy to have joined and participated in this project.

School of Dialogue program in Sosnowiec was made possible by the support from the AMTRA LTD.