Mr. Fitas’ testimony about local Jews that School of Dialogue participants gathered was used in their guide around Jewish sites in Wąchock. Their final project consisted of a paper guidebook through the town as well as an audioguide. Both guides were uploaded to the website of their school as well as that of the Wąchock municipality. They are also available in the local Cultural Center.

First mentions of Jews in Wąchock come from the 18th century. For a long time, local Jews were under the Kahal in Szydłowiec and later that of Iłża and Wierzbnik. An independent Jewish community in Wąchock was established only in 1911. In the same year, a Jewish cemetery was created, with a synagogue and a mikveh erected soon afterwards. The Kahal did not exist very long; in 1929, it was dissolved and local Jews became part of the Wierzbnik Jewish community again. On the eve of World War II, the town was inhabited by ca.450 Jews, which amounted to 20% of the local population. On October 22, 1942, Jews of Wąchock were deported to Treblinka death camp. What remains of the local Jewish community today is the dilapidated building of the synagogue and a renovated cemetery (surrounded by a fence that was put up a few years ago) with over forty surviving matzevot and a memorial to six million Jews murdered in World War II.

Students showed exceptional diligence in collecting information; they even recorded interviews with local residents. One of the students interviewed her grandmother who has fond memories of local Jews and was able to describe in detail a Jewish funeral ceremony. Local senior citizens told students how Jews would organize and advertise their vending stalls, where they would sell needles, threads and safety pins,  haggling over the price. In wintertime, when temperature would drop below zero, they would warm their hands with burning coal placed  in cauldrons. Many Jewish homes stood at or around the main square. Their inhabitants included a tailor, shoemaker and a hairdresser. From the audioguide prepared by the students we can learn that Mr. Frojen was a Jewish tailor; he was in Węglowo when the war broke out, where he made clothes for local residents: coats for men, women and children made from blankets and warcoats. Wielkowiejska Street was also home to Mordek, who owned and run a butcher shop. Hajusia sold beautiful textiles for dresses and Ms. Mendel ran a grocery store, while the owner of a bakery at Kolejowa Street was called Tajwa. 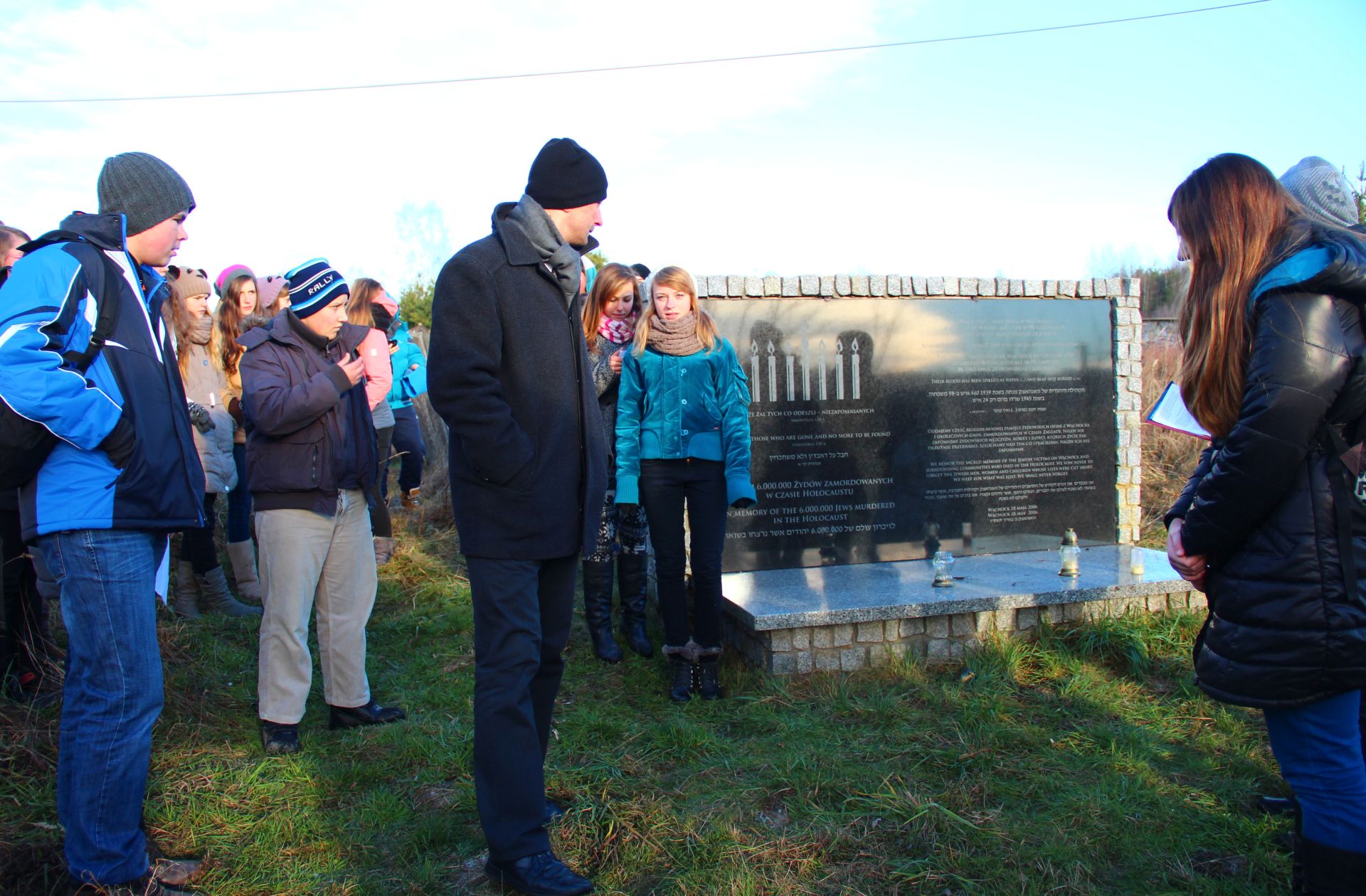 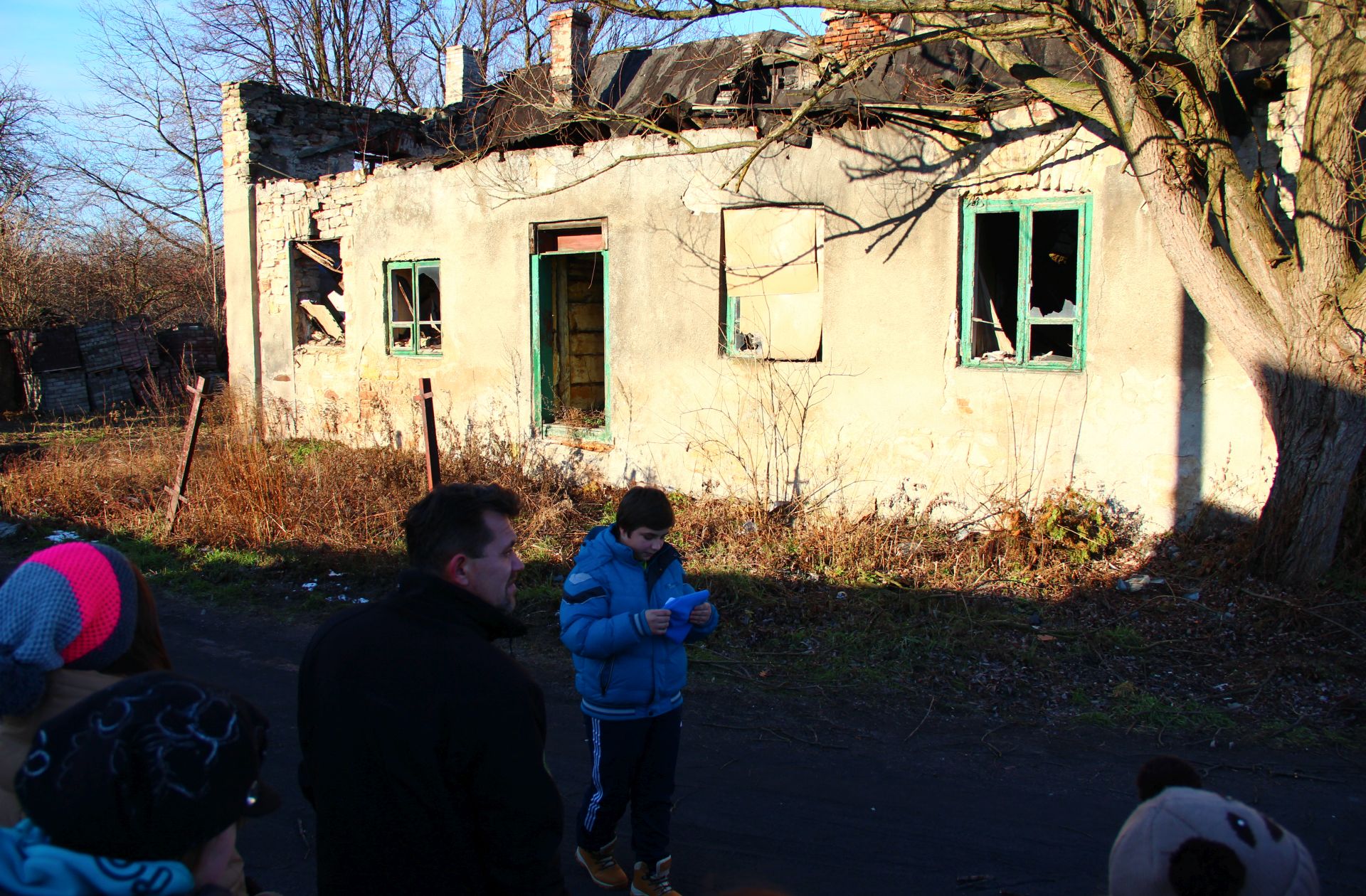 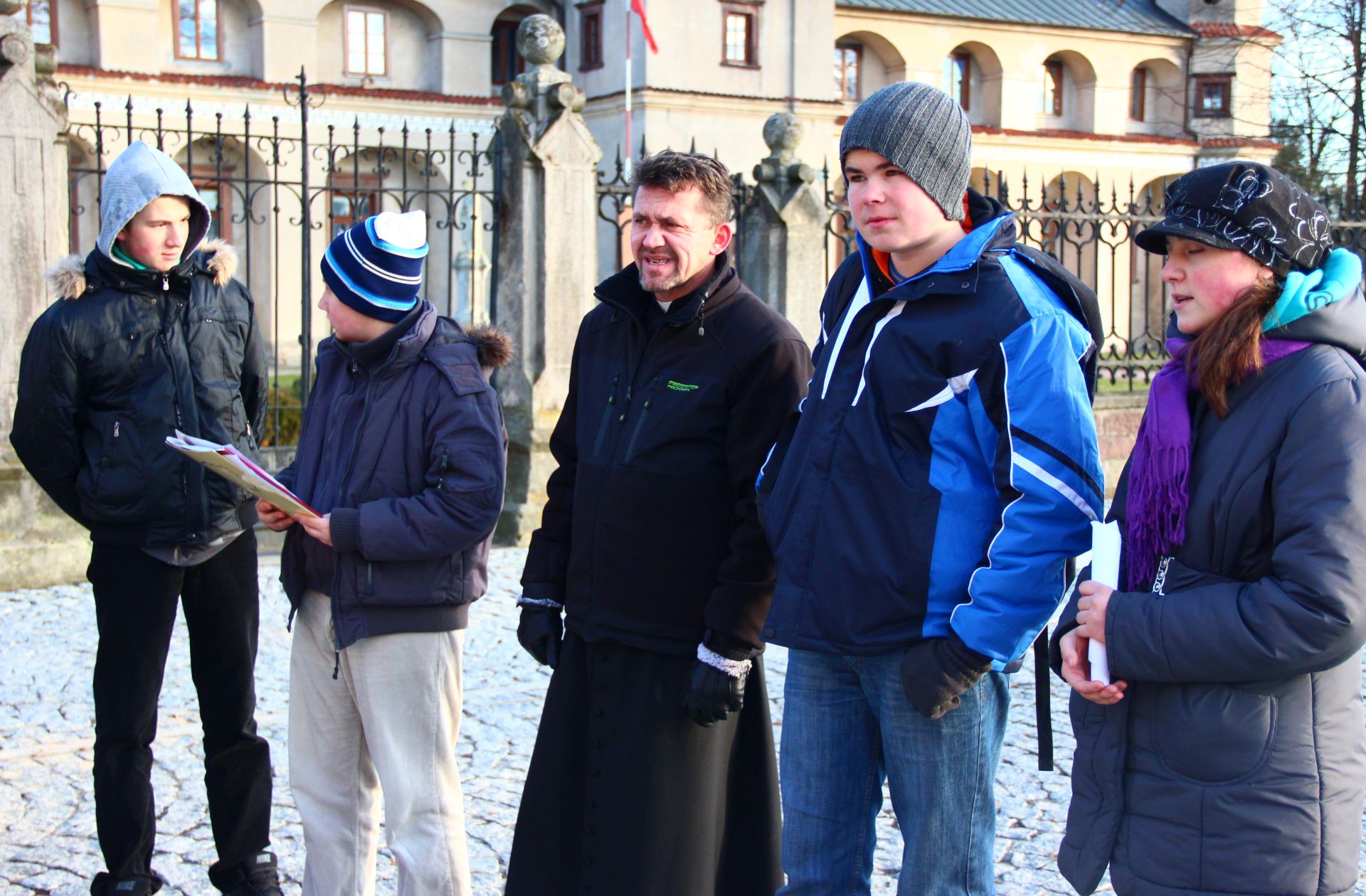 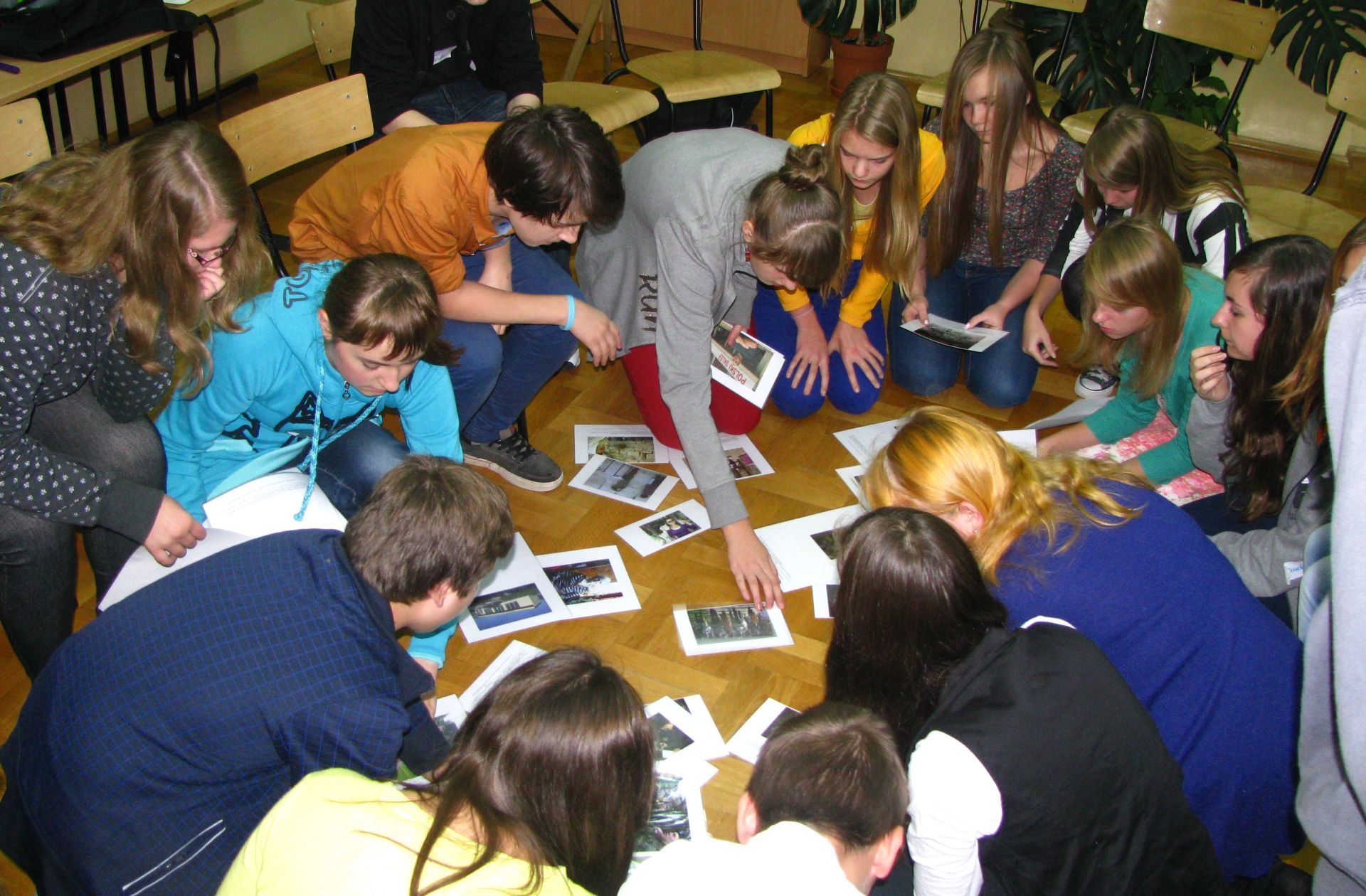 Students were eager to share responsibilities for project work: a group of them presented different stops on the route, others were responsible for filming and sound editing and still others recorded interviews. Their tour was held in December for second-year students from their school. Both representative of the local authorities – deputy mayor Sebastian Staniszewski – and the local priest, Father Gerard participated in the tour.

The tour began at the former Jewish school which now serves as an elementary school. The next stop was the main square, where Jews lived and ran their shops. The route then led tour participants along Kolejowa Street to the badly damaged building of the synagogue, which had been set on fire by German soldiers in World War II. Then on to the cemetery.

The tour’s final stop was a monastery of Cistercian monks, where a few Jews found shelter during World War II. Students also talked about Mr. Abram Pinkwas, photographer and glassmaker, who was born in Wąchock in 1904.

The walking tour focused on the paper version of the guide prepared by the students – in the form of a map with an information brochure. Later, students recorded an audioguide, giving listeners the opportunity to listen about sites listed in the brochure and to get acquainted with the story of Abram Pinkwas. Students’ project report took the form of a short newscast. Project participants demonstrated great interest and involvement in their work.

I live not far from Wąchock. The first time I heard about Jews was at school. Initially I was prejudiced against them, but thanks to the workshops my attitudes towards those people have changed. I learned about their holidays, which they treat similarly to how we view ours.

I used to have a negative attitude towards Jews, I heard some negative opinions about them. After the project, I learned about their culture and traditions and understood their religion a little bit more. I think there should be more such programs which enable us to get acquainted with other cultures, nations and local history.

Now I know that Wąchock was a “Jewish town”. I was not aware that Jews used to live here. Now I know the location of the synagogue and the Jewish cemetery; I know that Jews had their shops and market at the main square where they sold various products. The project was superinteresting, (…) with fun activities but also serious moments.

Prior to these workshops I was not aware how tough life could be for Jews. Now I know and I will not allow the history of Polish Jews to be forgotten.

School of Dialogue program in Wąchock was made possible by the support from SHIRLEY i HENRY HACKEL.