School of Dialogue in Warsaw

School of Dialogue in Warsaw is a one-of-its-kind program basing on customized workshop scenarios that reflect the specifics of Jewish history in the Polish capital. The project, co-financed by Warsaw Municipality since 2008, had paved the way for School of Dialogue program in smaller Polish towns. Over the years 2008 -2017 we have conducted over 90 sets of School of Dialogue workshops at 70 Warsaw based junior high and high schools.

The Jewish community accounted for a third of Warsaw’s prewar population, making the Polish capital the largest Jewish city in Europe (and second-largest in the world!) The community was extremely diverse, both in terms of the degree of assimilation and religiosity, as well as political views; Jews formed an important component of Warsaw’s multicultural mosaic. The history of Warsaw and its Jewish residents also includes the tragedy of the Warsaw ghetto and the postwar returns of Holocaust survivors. Each of the city’s districts holds its own unique history connected to the local Jewish residents. Even though students involved in the School of Dialogue program are familiar with the basic information about Jewish history in Warsaw, they are often completely unaware of the history behind particular buildings or individuals related to the area around their school.

By and large, School of Dialogue workshops consist of learning about the cityscape that participants inhabit. During the first session, educators lead Warsaw pupils on one of the three offered walking tours. The purpose of all excursions is to introduce participants  to the basic concepts from the culture, religion and traditions of Polish Jews as well as to present Warsaw’s rich prewar Jewish history in its full diversity.

From the possible options, the project group can decide on a workshop “Speech of the Stones” held at the Jewish cemetery at ul.Okopowa, in the course of which they work with task-sheets and  independently discover the history of the site and people buried there. Students from schools located on the right bank of the Vistula river most often opt for “Jewish Praga” walking tour, which introduces them to the story of the older and larger Jewish community than the one across the river in Warsaw. The workshop culminates at the Jewish cemetery in Bródno district, whose existence many Varsovians are not aware of. The theme of the third possible tour is “Mysteries of Grzybowski Square”. In the course of this session, students visit the synagogue and a kosher store, learn about various aspects connected to contemporary Jewish community and reflect on co-existence of Judaism and Christianity.

During the second workshop, which is held on the school premises, students consider the different fates of Polish Jews in the 20th century as well as their attitudes towards the country’s political and social situation. They also observe a similar diversity in attitudes of Poles towards Jews.

Together with Forum’s educators, students discuss the influence of history over our lives and whether it indeed teaches us anything.

The third workshop has the students again discovering the cityscape as they embark on the walking tour through Warsaw ghetto sites. The tour’s format was inspired by urban spatial games. Divided into two teams, students explore traces of the annihilated city and learn about the history behind sites that no longer exist. They also focus on the contemporary architecture of Muranów residential district. The tour ends with a film screening at the Jewish Historical Institute, which supplements the knowledge gained in the course of the walking tour.

During the fourth session, which is again held in the school, students discuss with educators different ways of historical commemoration. Together, they ponder the question of form and – more importantly – purposefulness. The second part of the workshop is fundamental for the further course of the program; this is when educators prepare students for group work on their own project.

What initiatives do Warsaw School of Dialogue participants come up with? It is hard to reduce their creativity to a short description. A great case in point is Lajos Kossuth High School No.63, whose students participated for spring 2016 edition of the program offered a project dedicated to Ludwik Hirszfeld – patron of the street their school is located at. Workshop participants held a happening, a street poll and a series of presentations and knowledge-based quizzes which they addressed to a wide audience, ranging from all other grades in their high school, pupils from the nearby elementary school to residents of houses at ul.Hirszfelda. They also designed stickers with the image of Ludwik Hirszfeld that they handed out to all students and employees of their school. Furthermore, they designed and created an information board commemorating the famous doctor that they placed on the wall of their school building and held an unveiling ceremony to celebrate this event. Thus, their project left a permanent mark on Warsaw’s cityscape. 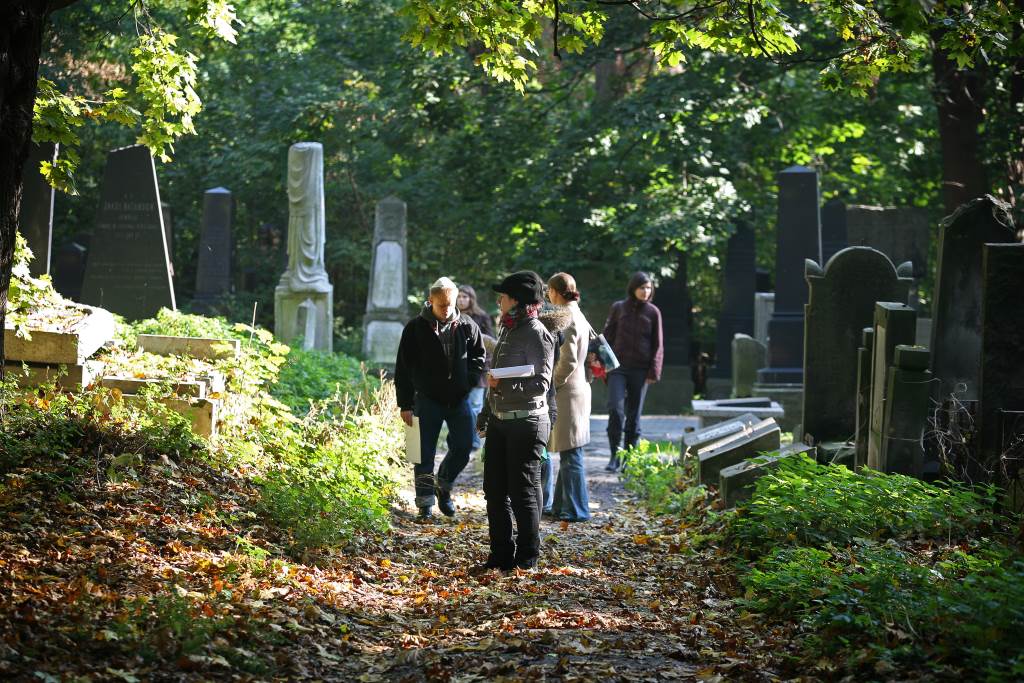 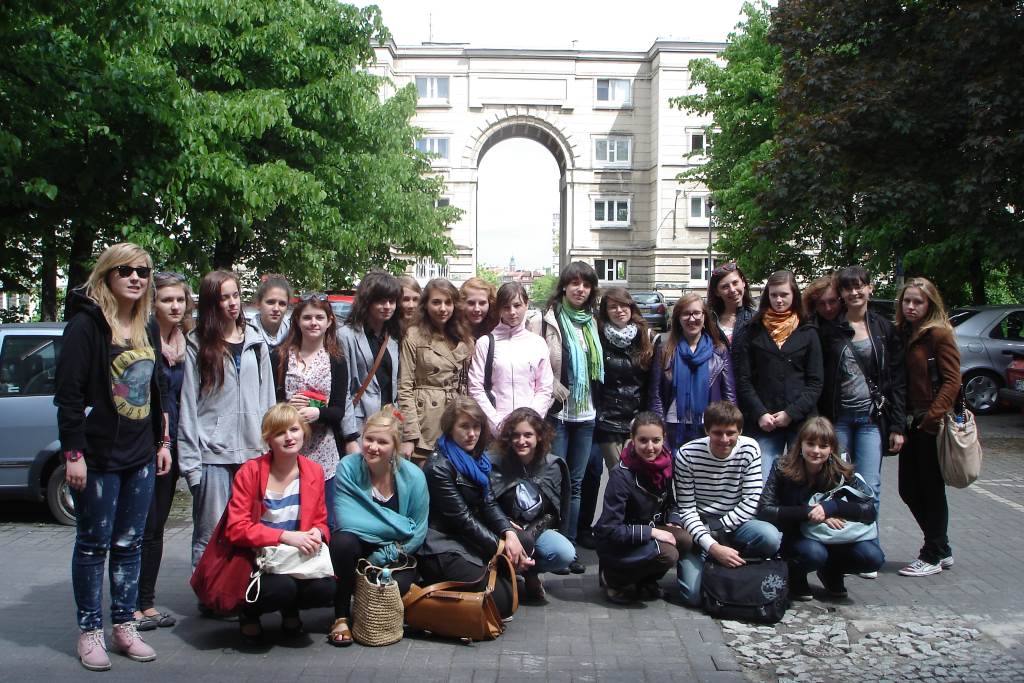 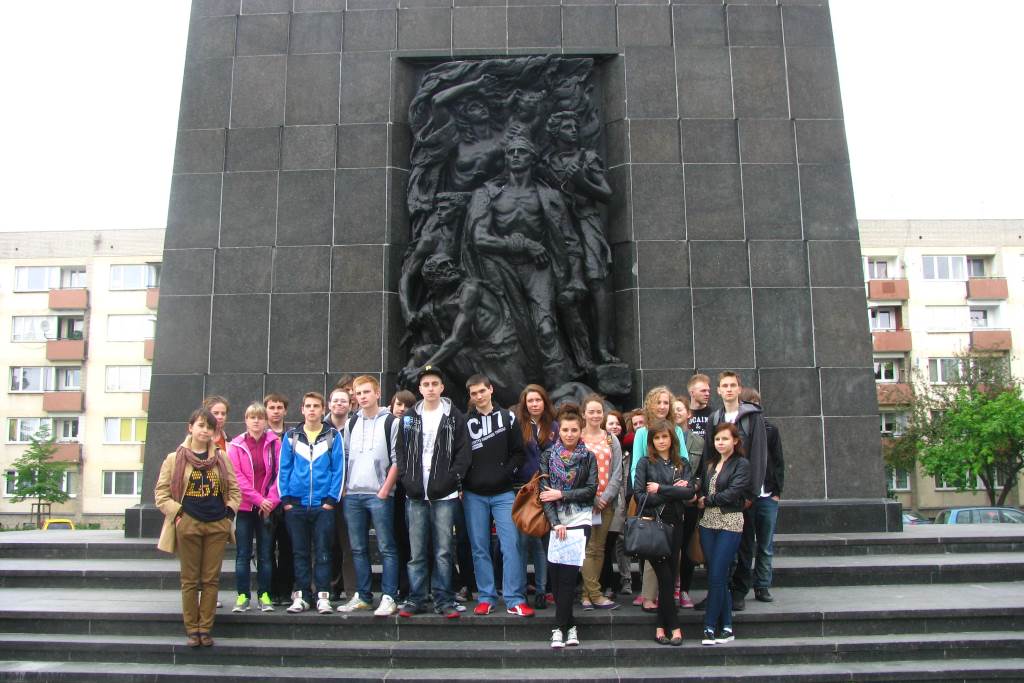 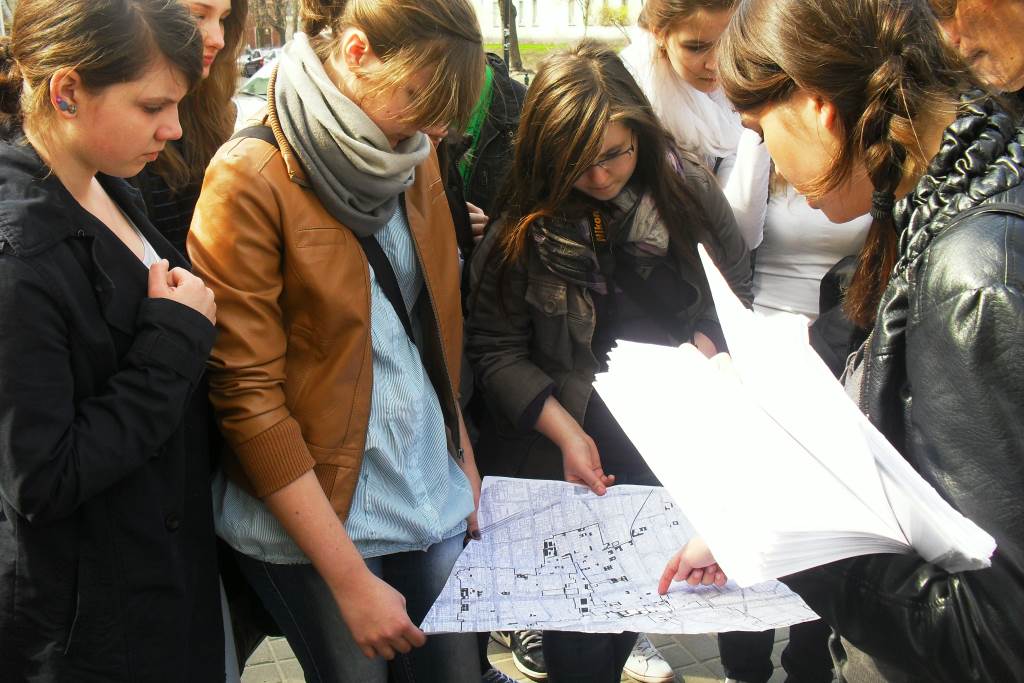 Other students choose to seek inspiration from Jewish history and to share it with others in a creative way, like high school seniors from Technical School of School Complex No.3 in 2016. Workshop participants organized a soccer championship called School Maccabi Games with representatives of all grades in attendance. The tournament was held on the 101. anniversary of Maccabi Sports Club establishment. After the games, students showed a multimedia presentation on “Sport Macchabees”, or famous although often overlooked Polish-Jewish sportsmen.

Just how much can the students’ final project relate to local history? Best testament to the answer “very much” are projects from a 2015 School of Dialogue in Żoliborz and a 2017 School of Dialogue in Grochów districts. In 2015, students from Stefania Sempołowska Junior High School and High School dedicated their project to two individuals awarded the title of Righteous Among the Nations who had lived in Żoliborz. A film interview with both of the Righteous interspersed with archival photographs and students’ reenactments illustrating historical narratives were presented to Żoliborz residents in a local café and posted online on YouTube. The screening was preceded by a PR campaign, where students handed out leaflets and screening invitations they had made themselves. In 2017, students from “Samuel” Christian Junior High School commemorated the history of Grochów Kibbutz, located not far from their school, with their final project. As students explain: “We collected the necessary work equipment: spades, rakes, a watering can. Our school’s principal gave us her permission to cultivate the flowerbed in front of our school. We bought soil and flowers at the nearby Szembeka bazaar and brought everything over on a cart. The boys dug in the soil, while the girls prepared the space for the flowers. We put the high-quality soil in the flowerbed and – with the help of our teachers who assisted us with the project – planted the flowers. We bought flowers in Polish and Israeli colors: white, red and blue. We watered the finished flowerbed and now we are very proud of it.

After we finished working, tired but happy, we danced an Israeli folk dance – the hora – just like our peers from Grochów kibbutz had done.”

Among projects uncovering forgotten history relating to Warsaw’s Jews, the 2012 School of Dialogue project entitled “Memory Zone” by students from Junior High School No.134 at the Youth Educational Facility No.4 Students retraced stories of individuals connected to Mokotów Institute who had saved Jews during World War II. Students were inspired to learn more about the topic after spotting a commemorative stone not far from their facility. First, they held a street poll among Varsovians in the vicinity of the memorial and then conducted a professional archival search in Warsaw’s Jewish Historical Institute, the National Library and Warsaw’s Municipal Archive. They also interviewed the director of Mokotów’s Youth Culture Center, which is located in the prewar headquarters of Mokotów Institute, as well as other individuals who had knowns Władysław Sala, the Institute’s director during World War II.

More and more often, workshop participants come up with initiatives that reach out and beyond their school’s community. Students not only reach a wider audience, but oftentimes demonstrate academic-level professionalism and artistic creativity. An example of the former is a group of students from Waldemar Milewicz High School No. 125, who in 2013 conducted a professional survey on Jewish history on a sample of ca.500 local residents before embarking on their multifaceted final project. As for the latter, a very noticeable project was done in that same year by students of Janusz Śniadecki High School No.30. Their happening within the city called “I know where I stand” (Wiem na czym stoję) was combined with a number of diverse educational initiatives and attracted not only Varsovians, but also foreigners. 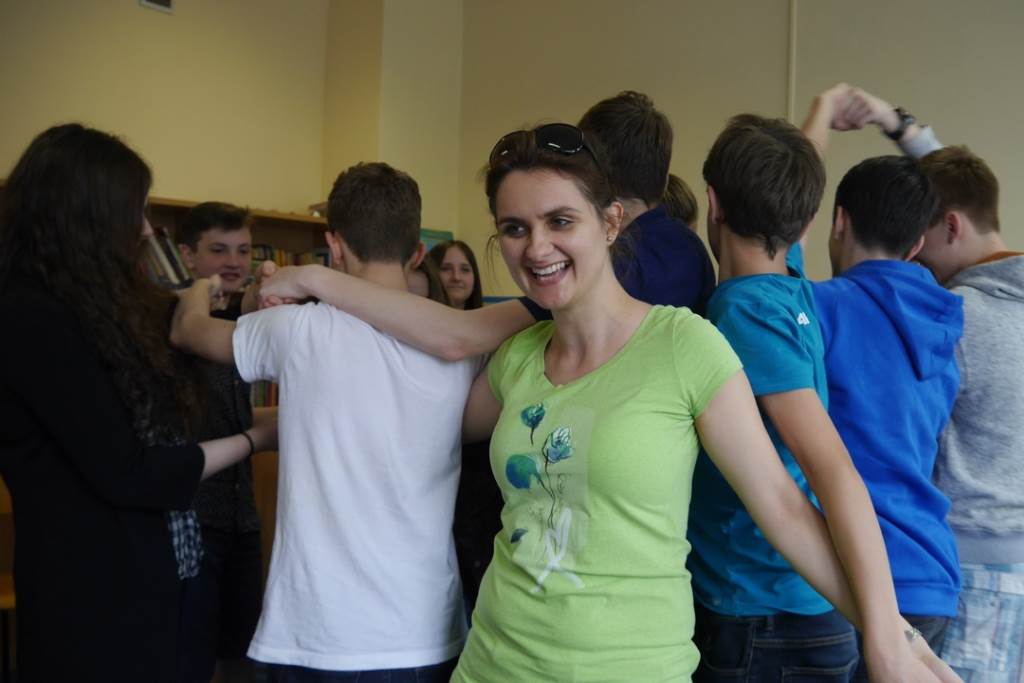 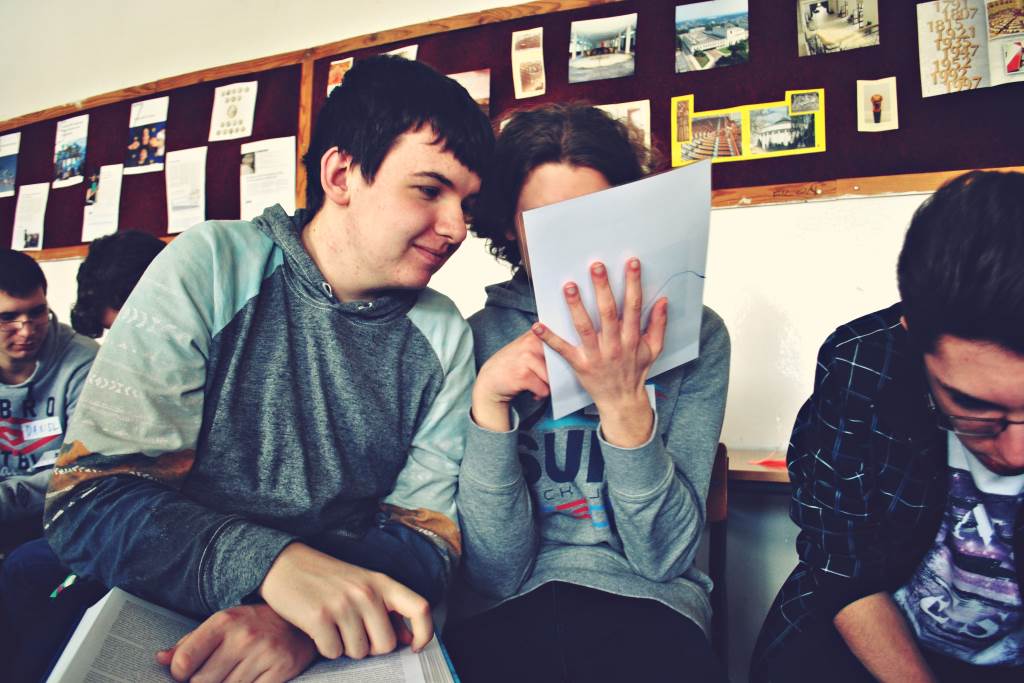 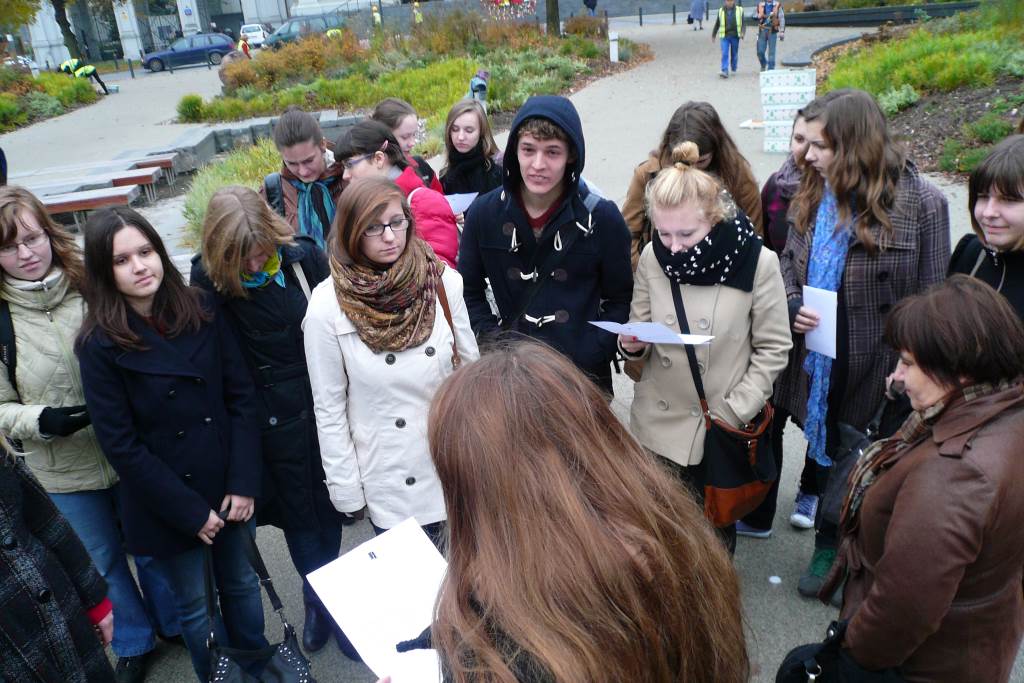 For School of Dialogue participants, Warsaw is still a fount of inspiration that is yet to be fully fathomed. It is impossible to summarize so many diverse and long-term project activities of Warsaw’s secondary-school students. One thing is certain – regardless of the time passed, Warsaw’s cityscape and its rich history spark the imagination of local youth and provide an infinite source of ideas for new projects.