School of Dialogue at Janusz Korczak High School No 2

Continuing School of Dialogue in 2016

The workshops organized in high school No 2 in Wieluń, in the framework of the School of Dialogue program, were held in a beautifully decorated Hall of Memory. The favorable scenery of the mini-museum about the history of Wieluń in 1939, as well as devotion of the history teacher, inspired students to get very involved. “From the beginning of our education, we have been interested in history, particularly the one close to our hearts, the local history”, they said. “But the fantastic educators, Magdalena Ogieniewska and Weronika Romanik, inspired us to really engage ourselves”. Right after the first workshop, the students began their research in many institutions – local churches, Wieluń Museum, the town hall and the Institute of National Remembrance.

During the research, they found out that around 5,240 Jews lived in Wieluń before the war, and they made up 33% of the total town’s population. A classicist synagogue was built and a mikvah next to it. The community also had a kehilla house with a garden, a home for the poor Jews, a cemetery and a funeral home. There was a school for girls, Bet Jaakow, as well as several cheders and libraries. The Jews from Wieluń were engaged in the production of cotton, soap, oil, or worked at a sawmill.

They lived in the town’s center. Their houses were almost completely destroyed during bombings by Germans in September 1939. Today, there is still the cemetery where a monument in the memory of the victims stands.

When the project ended, the students summed up their three-month-long research by saying “this was an amazing adventure and we have acquired new skills and knowledge.” While researching at local institutions, they also searched online. They managed to find an on-line version of Informator Wieluński, a newspaper from 1935. But they also found photos of Jewish youth from Wieluń dating to 1937 and family portraits from 1942 of the Jakubowicz family who was originally from Wieluń. Their careful and painstaking research met with appreciation of Mrs. Małgorzata Płoszaj, who collaborates with the Virtual Shtetl website. She asked the students to share the photographs they had found. But there were other surprising twists. Next to the monument at the Jewish cemetery, the students found a plaque with a message and a phone number of a descendant of Jews from Wieluń who visited the town. 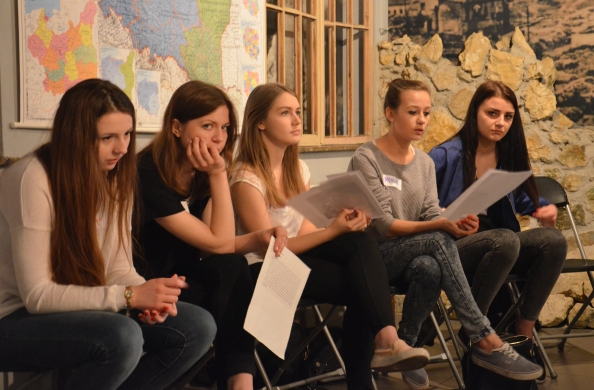 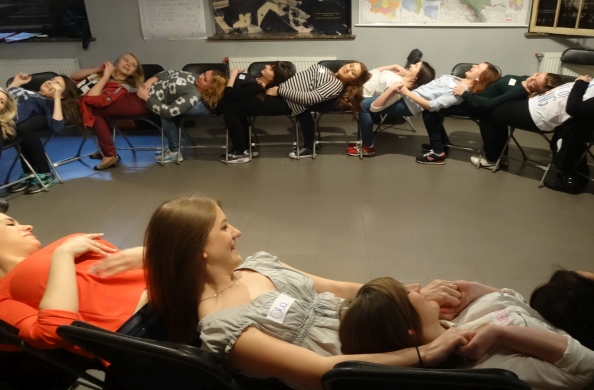 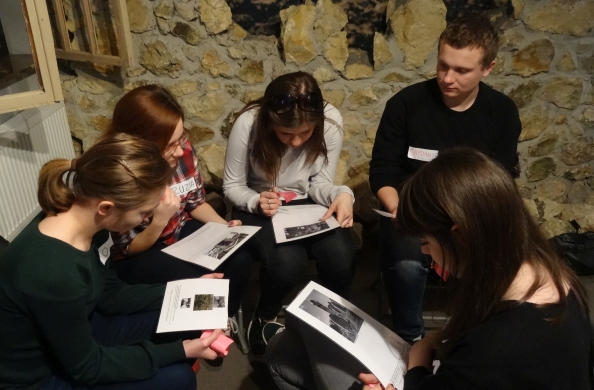 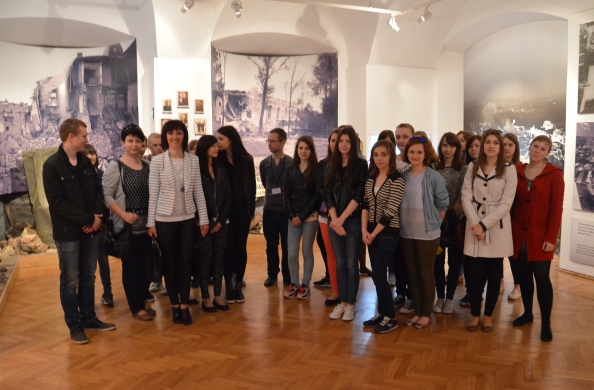 The high school students also managed to make interesting partnerships The local radio station became the media partner of the project and reported on their findings. Paweł Gogola, a writer and composer, agreed to write a song about their project. With the help of the parents’ advisory board at their school that provided funds, the song “Dzieci Korczaka” (Korczak’s children) was recorded in a professional studio.

On April 19, the students presented a theatre play, and then laid daffodils at the memorial for the Jews of  Wieluń. In April, the group of students was invited to present their project at a session of the Youth Town Council. At the same time, the girls from the group responsible for promotion, created a logo, a poster and invitations for the walking tour. They also put the information on the website. The last stage of preparations began. One of the parishes in Wieluń lent them  sound equipment. The final stage of the project involved baking Jewish cookies, hamantashes, as snacks for the walking tour participants.

On May 28, the students took a group of nearly 50 people for a walking tour in the footsteps of the Jews of Wieluń. Taking up the role of guides, the students took the walking tour participants to the place, where the synagogue used to stand before the war, showed the ghetto area, stopped at  Legionów Square and visited the Jewish cemetery.

The participants also visited the Wieluń Museum where the students presented them the collection of Judaica. In the local library, they showed a painting of the market square in Wieluń and the town pre-war residents.

Yet, the students did so much more than just organizing the walking tour. They interviewed several witnesses of history – they spoke with Mr. Henryk Strózik, Mr. Stanisław Sęczkowski, Mr. Kieszowski, Mrs. Zofia Burchacińska and Mrs. Bączkowska.  To the great surprise of all, they even created an app “Wilojn-Wieluń”, which serves as a guide to the Jewish Wieluń. They also created a very vibrant fan page of their project on Facebook and 5 lesson scenarios about Jewish traditions which they used  during workshops  organized for fellow students. In June, they made paintings of Wieluń, presenting the town before the war, during the war and after the war, and displayed them at the sports field. This was their way to commemorate the Jewish residents of their town.

The School of Dialogue program allowed the high school students to take action individually, show their creativity, discover their own talents and broaden their own perspectives. “The School of Dialogue project is a wonderful inspiration to take action, not only in the name of Jewish people and not only in the name of the residents of our town”, they concluded.

The participants in the School of Dialogue program learn about the notion of multiculturalism, which allows them to view themselves as a part of something bigger. They learn about tolerance, they become more sensitive to another human being, they learn to work in teams and how to be accounted for the given task, but also how to do research on their own.

This is a wonderful and valuable experience. We did not only learn about our past, but we also developed people-to-people exchanges, we had to overcome obstacles created by the society or ourselves. Tolerance and love are keywords of our work. We learned that acting together can make a difference. We raise awareness about the history of our town, about the culture we live in.

I understood how important it is not to forget about the past, about the history of the Jews from Wieluń. During the workshops, I have also learned about the values of team work and multiculturalism.