“Jews of Wieruszów are not just numbers, empty names, dim memories. They are people in flesh and bone who are now gone… None of us would wish to have nothing left after they cross ‘to the other side’. And there is no one who could speak about Them left. This is why we want to recall a few stories and describe some of the photographs so that those who are long gone get their humanity back…” wrote Wieruszów high school students on their FB fanpage. Inspired by School of Dialogue workshops, they commemorate their town’s Jewish community.

Jews had lived in Wieruszów since the 17th century. In 1810, an independent Kehilla was created and in 1822 a Jewish cemetery was established in the town. The synagogue was erected in 1850. Before World War I, a Jewish school for girls existed in the town, while the boys would be educated in cheders and yeshivas. In 1917, the local Zionists established a Hebrew preschool in Wieruszów. Right before the outbreak of World War II, the town had 2400 Jewish residents. As soon as German occupation of Poland began during the war, Germans organized a massacre of local Jews.

In October 1941, 3500 thousand Jews were hoarded into the ghetto that was created in Wieruszów. In August 1942, the ghetto was liquidated: after going through a selection process, the sick and the elderly were shot on the spot, while all others were deported to Auschwitz-Birkenau camp. Up until 1990s foundations of the synagogue, which had been demolished in 1939, remained visible. The building of the former mikveh at Kilińskiego Street by the river was rebuilt and currently houses the kayak section of the local sports club. The Jewish cemetery, which was devastated during the war, is located in the north-eastern part of town, not far from the river. Around 100 headstones survive, the oldest of which date back to the first half of the 19th century. In the southern part of the cemetery, a memorial plaque marks the mass grave of 86 Jews executed by Germans during the ghetto’s liquidation on April 21, 1942.
“If it wasn’t for those workshops, I would have never known that my town used to have a ghetto or a synagogue” writes one of the workshop participants. Thanks to sessions with Forum for Dialogue educators, students gained a new perspective on their town, but also learned a lot about Jewish history, culture and religion. 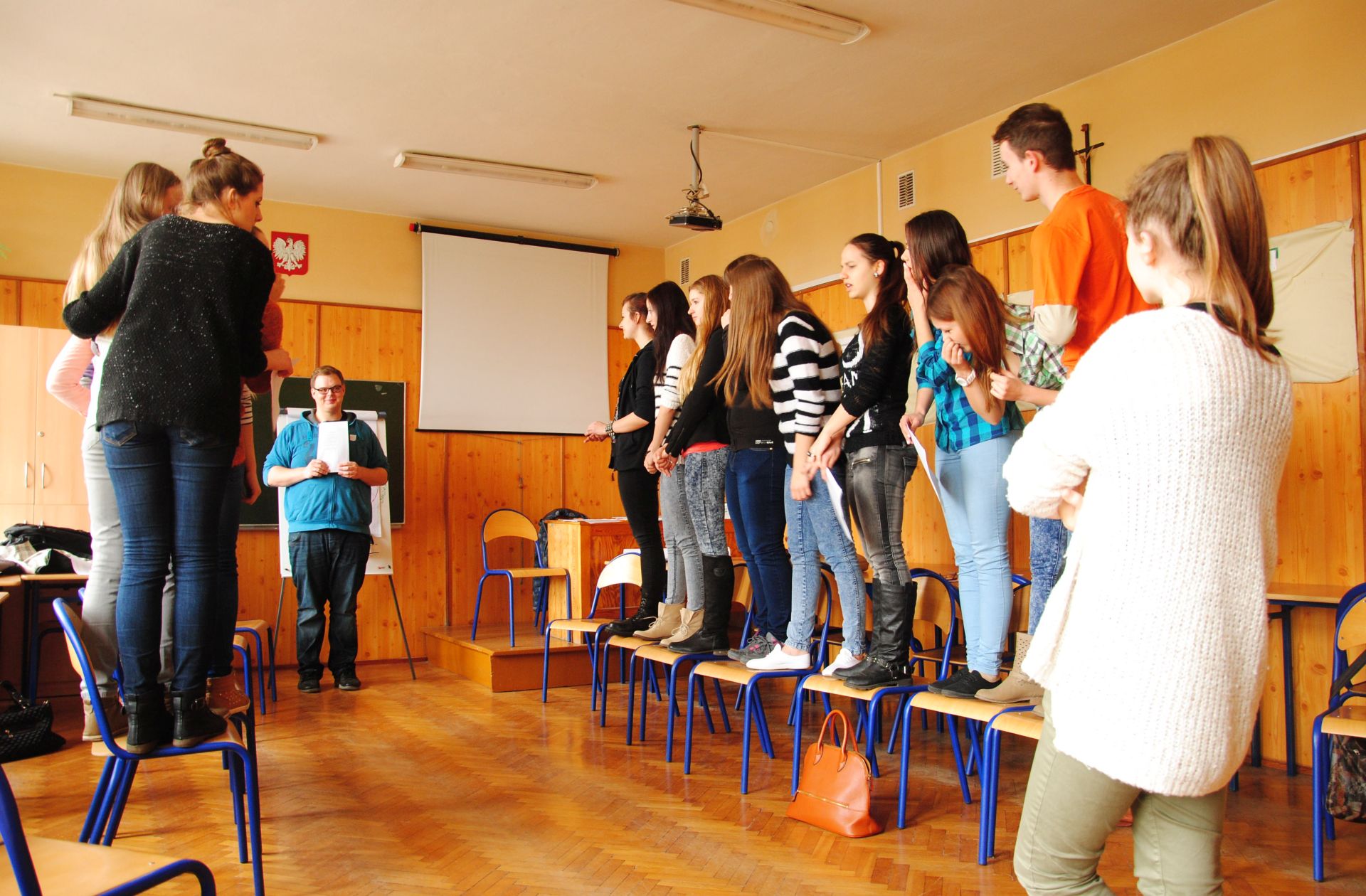 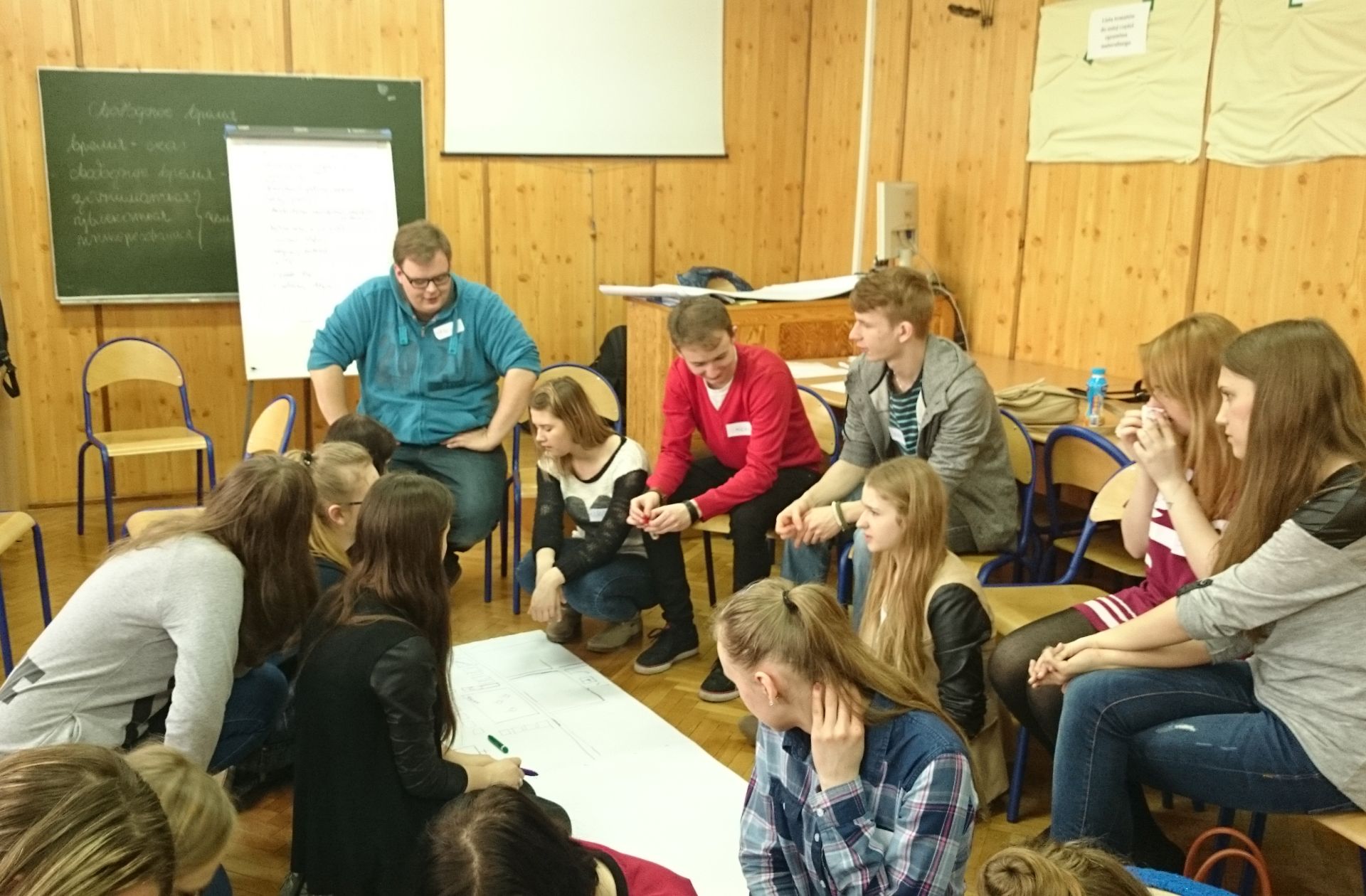 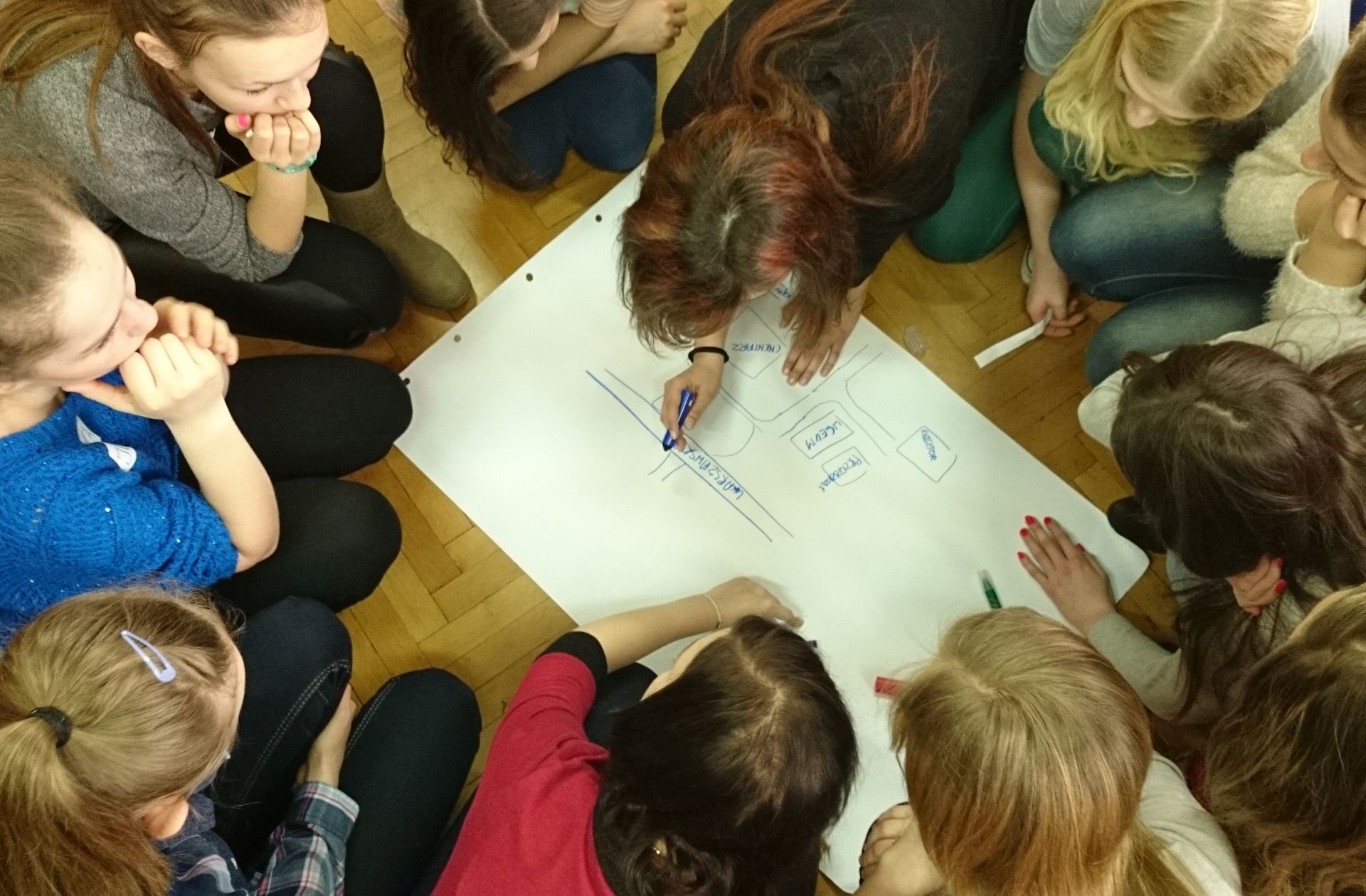 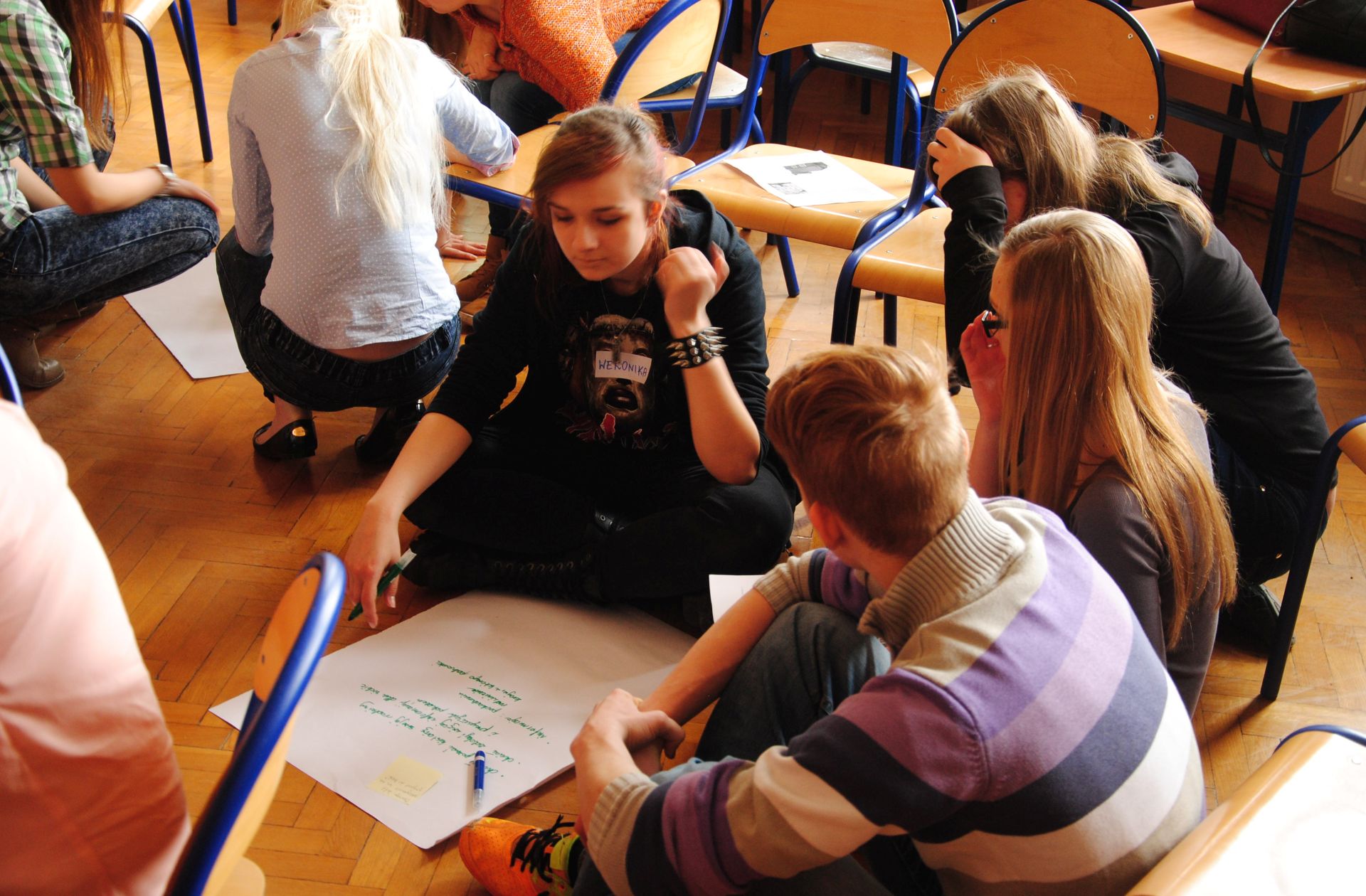 Over the course of four workshops, they learned about the location of the local synagogue, found out which part of the town had been within ghetto borders and identified the building which used to serve as a mikveh.

In the course of preparing their own tour through Jewish Wieruszów, students visited the Pedagogical Library in Kalisz, where they obtained an 1966 article entitled “Jews in the pre-war Wieruszów”. Students also used Yad Vashem’s archive and tracked down Wieruszów’s “memory book” written in Hebrew in 1970 (Virushuv: seferyizkor). Their search also yielded an interesting discovery – a document proving that a Jewish sports club had existed in their town. “We are happy to have been motivated by Forum for Dialogue foundation to explore a fascinating fragment of the history of our ‘small homeland’, which for most Wieruszów residents was a white spot on their memory map” wrote students after the workshops had ended.

To fill in the aforementioned ‘white spot’, students decided to organize a tour of Jewish Wieruszów, inviting other high school students, their teachers and local authorities to participate. The tour was attended by Mr.Andrzej Szymanek, county head (starosta) and his deputy Mr.Mirosław Urbaś, as well as by Wieruszów’s mayor Mr.Bogdan Nawrocki. The tour contained elements of an urban game – in various stops along the route, students not only presented information about particular sites, but also supplemented their stories with general information related to Jewish history and culture. They also prepared food to reference particular Jewish holidays and a competition, in the course of which participants would receive points which would win them stones that would later be placed in the Jewish cemetery, in accordance with the Jewish tradition.

Students also presented old photographs that were made available to them by one of the town’s residents – Mr.Lucjan Stojecki. “Many passersby would approach the stops organized for the tour, asking about the objects at each stop and examining with great interest the old photographs presented there. They congratulated us on the idea for the tour as well as its execution and shared what they knew” write students about the event.

Local media (“Tygodnik Ilustrowany” and “Łącznik) published articles and photos from the walking tour. Additionally, “Łącznik” added more photos and interviews with the tour-guides on its website www.tugazeta.pl. Achievements of Wieruszów’s high school students did not go unnoticed by the 2014 School of Dialogue Competition committee, who bestowed upon them one of the six honorable mentions at the 2014 Gala.

But students did not stop there. “In July, we have appointments at State Archives in Kalisz and Sieradz, which are in possession of documents pertaining to Wieruszów’s Jewish community. Between August 26 and 29, 2014, on the 72nd anniversary of the brutal liquidation of Wieruszów’s ghetto, we were invited by the local authorities to organize an exhibition that would be based on the materials about Jewish community in Wieruszów that we’ve obtained. Employees of the local travel agency “Polonia”, who host foreign tourist groups in our area, are also interested in the information we found” describe their future activities Wieruszów’s high school students.

If it wasn’t for this course, I would have never known that my town used to have a ghetto or a synagogue.

We are happy to have been motivated by Forum for Dialogue foundation to explore a fascinating fragment of the history of our ‘small homeland’, which for most Wieruszów residents was a white spot on their memory map.

I was able to gain a new perspective on a number of issues and topics, which greatly contributed to my changing some of my personal opinions. I now understand Jewish culture better.