Wiżajny lies on the very north-easternmost tip of Polish territory, with Lithuania on the right and the Kaliningrad Oblast on the left. Located between two lakes, it is called the Polish pole of cold.

There is very little information about the history of Jews in this town, and since no one made an effort before, it is hard to find anything.

In any case, in the 19th century Jews constituted a majority of this town’s population when its main sources of income depended on trade and smuggling. In 1867 they constituted 52% of the total number of Wiżajny inhabitants. In the years that followed, many of them emigrated north to Scandinavia, to the United States, and to Brazil, among other places, looking for work, like most people did at that time.

There used to be a cemetery here, and in a sense there still is. Next to the lake, in today’s Wierzbowa Street. There’s a playing field there now. Before, there was a dancehall and a campsite. There are no matzevot anymore, not a single piece of them. They were stolen, taken away, nobody knows where they are. Instead, you can find a piece of the wall that used to surround the cemetery, but now it doesn’t.

In 1927 Wiżajny had two synagogues with wooden annexes, and one ritual bath. One of them, the one that used to be attended by men, where the lower market is located, has been replaced by a parking lot. The synagogue was made of wood, with the front door facing the lake. During the war, the Germans had a warehouse there. The other synagogue, the one attended by women, stood next to Dylon’s house. Dylon himself had a shop in which he sold iron products, house appliances, and lubricants. Next to it is a building that supposedly still is the building of the former cheder. These are the things that boys and girls talked about during the walking tour they organized as part of the School of Dialogue for the town’s inhabitants, their parents or the elegant gentlemen and ladies from the local administration. They prepared very well and became really involved in the matter, because it’s not easy to find information about a town that has hardly ever been written about. So they walked around the town and knocked on people’s doors, asking for a few minutes of talk and a few words of explanation what stood where, because they do not know. They conducted a few interviews and collected many stories. 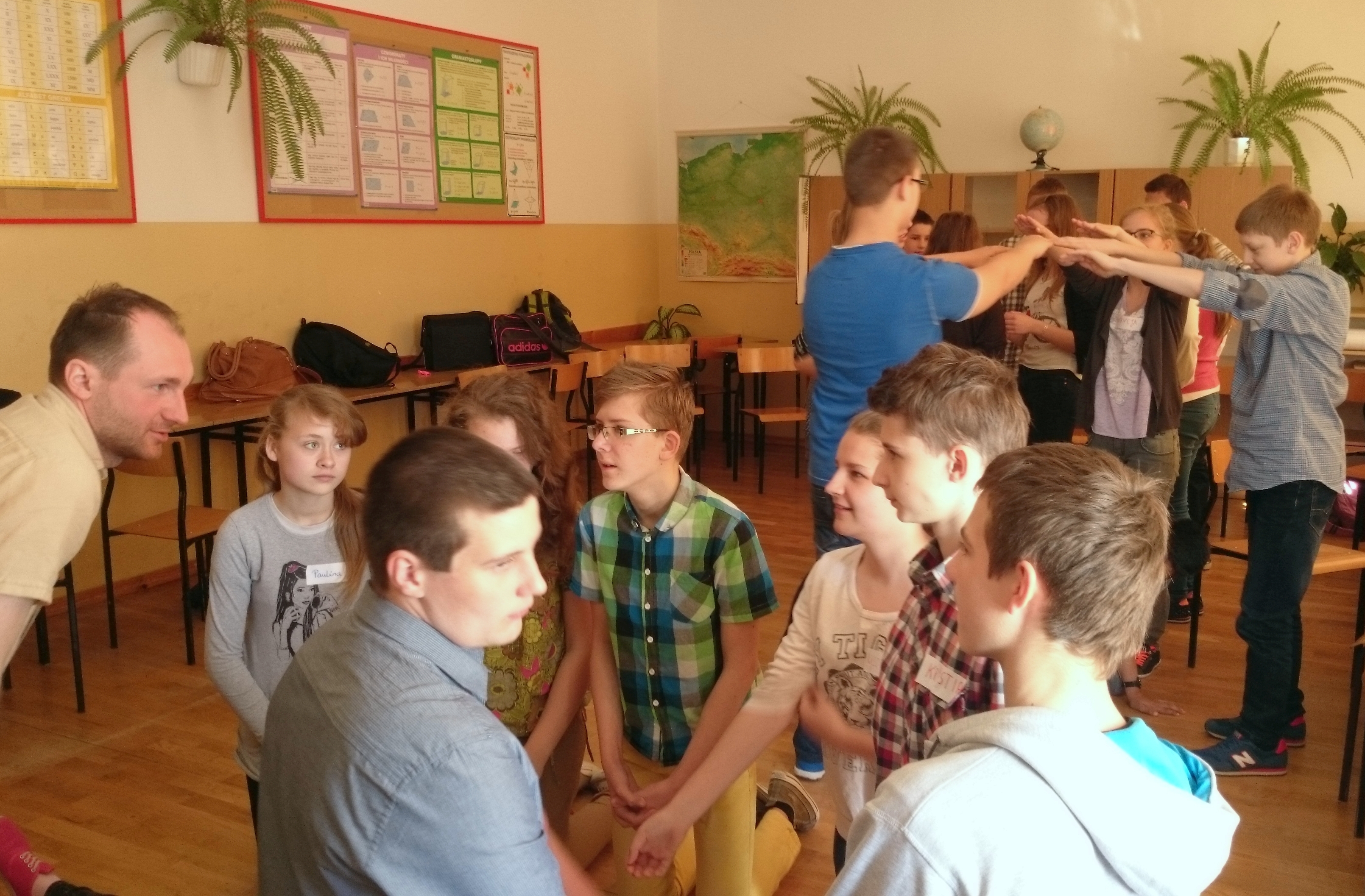 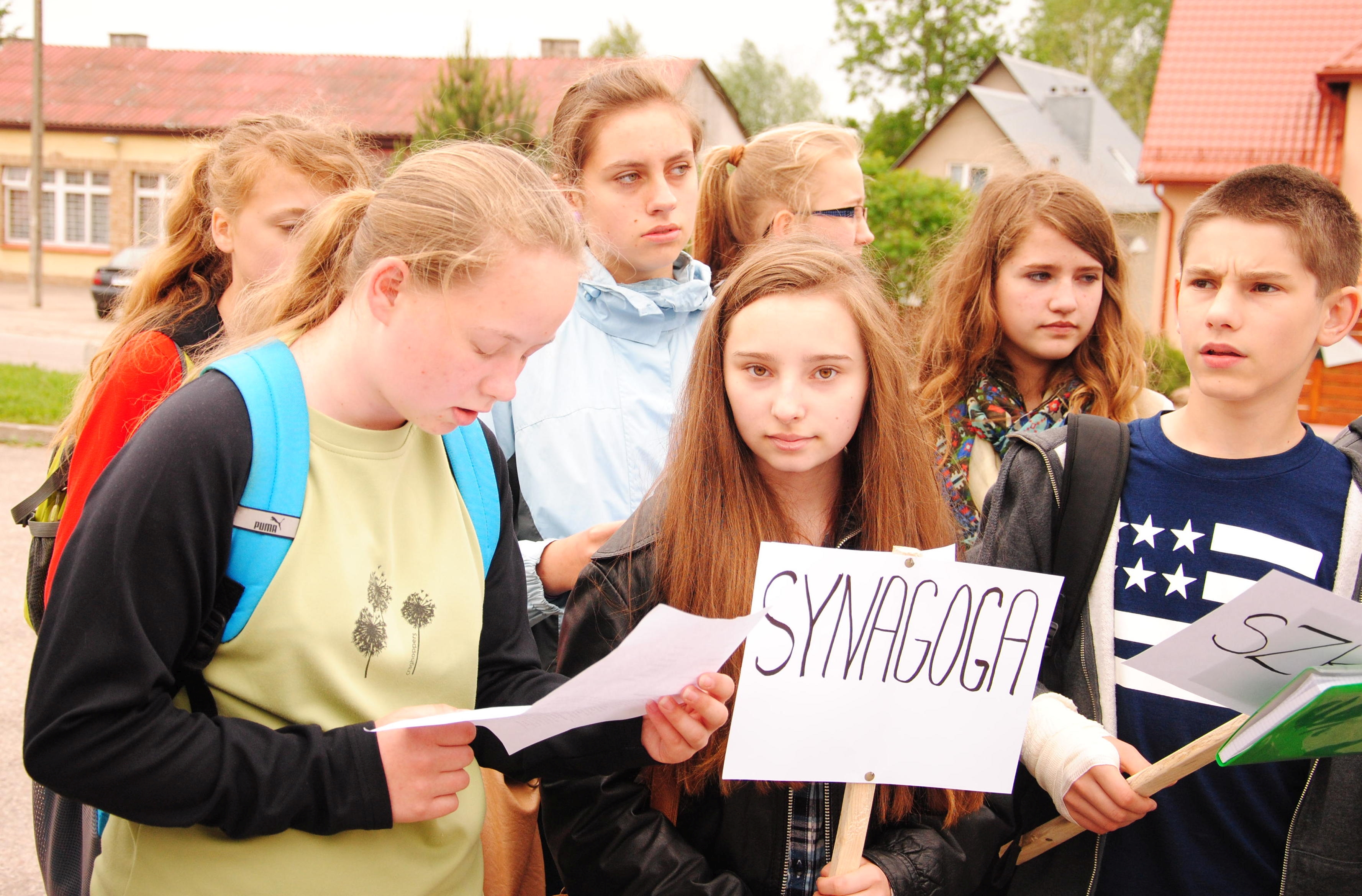 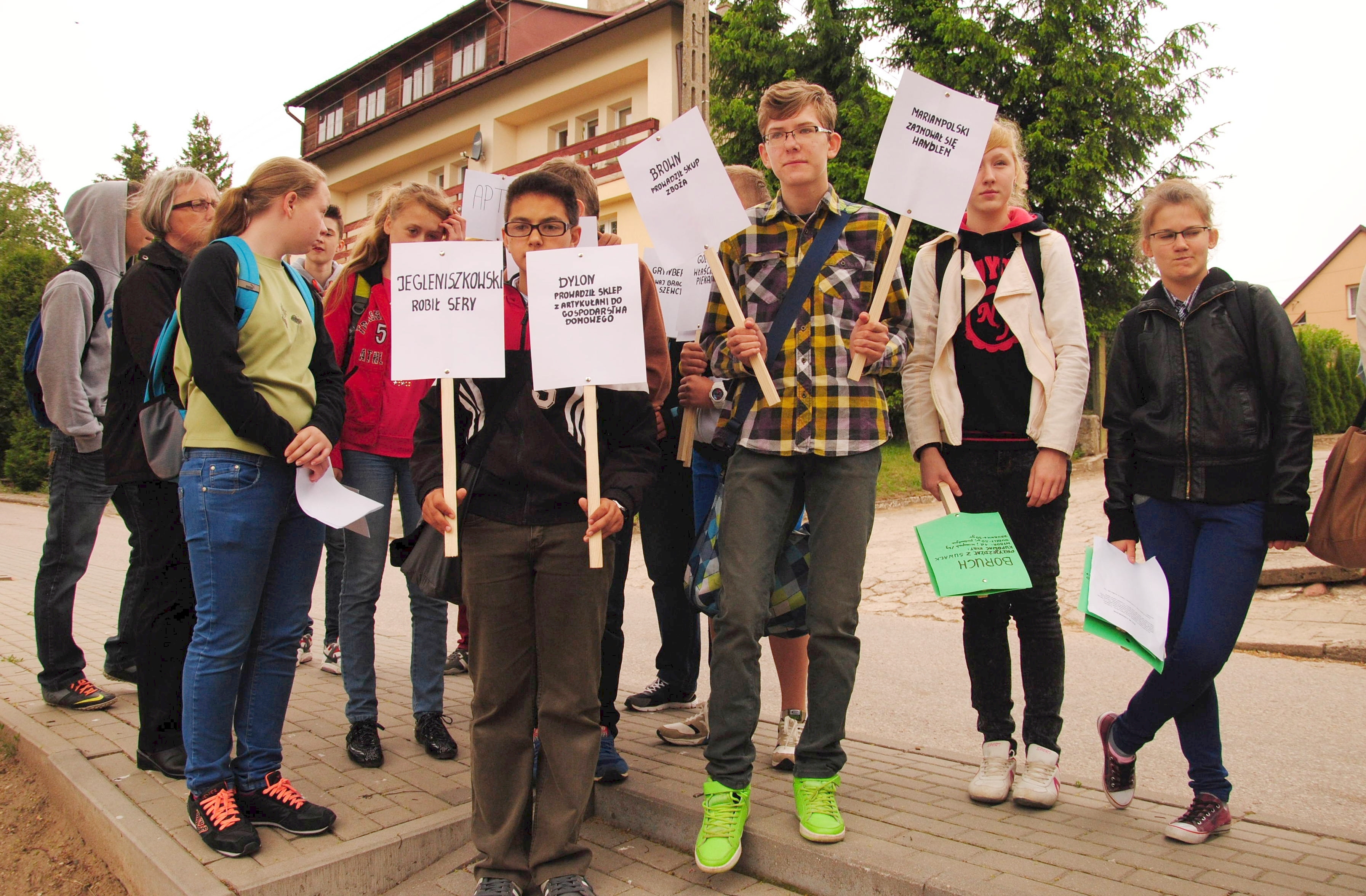 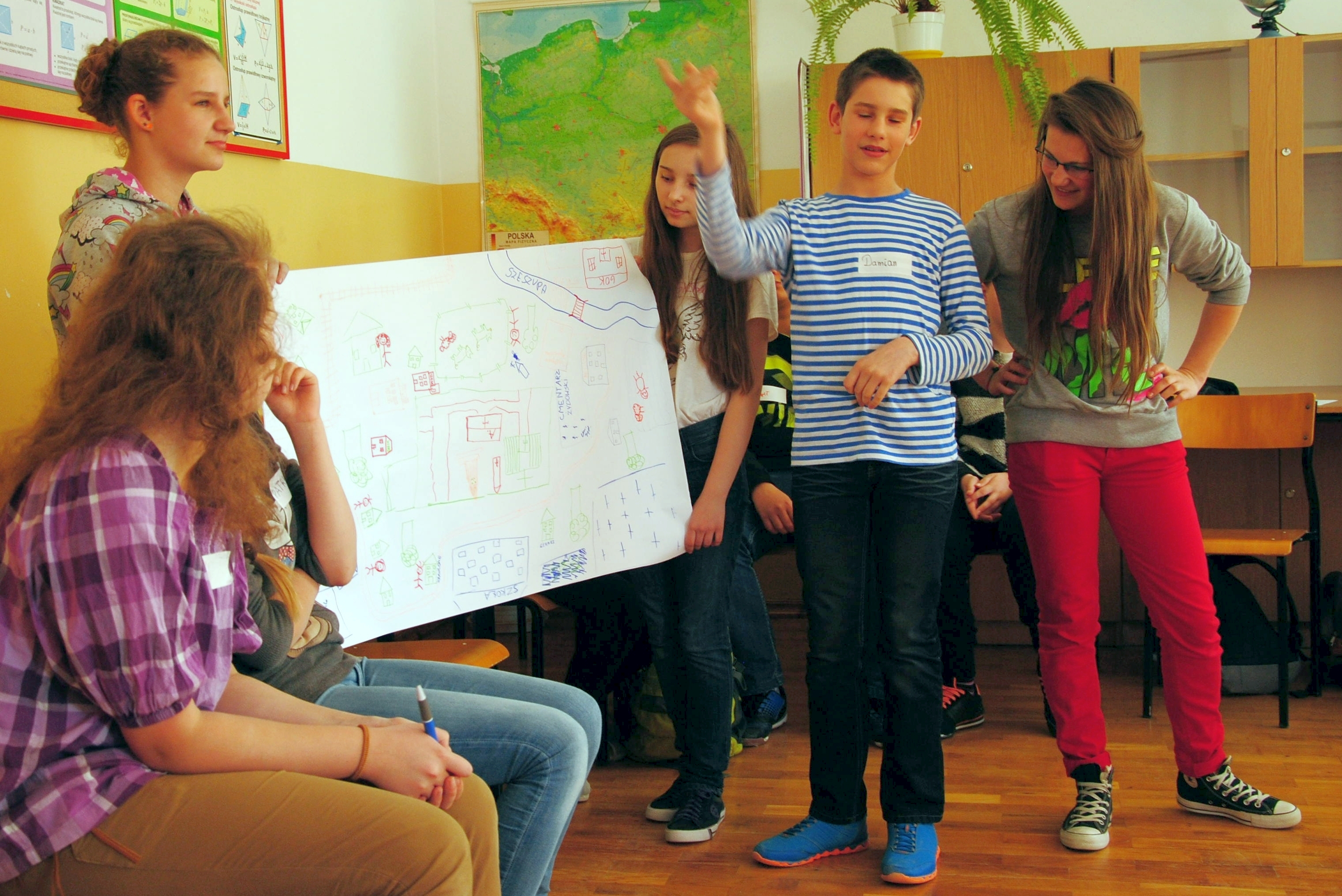 During the walking tour the students talked about important places and where they were located, who lived there and what they did. That the greatest number of Jews lived by the lower and upper markets, and in Ogrodowa Street where lived a doctor that had two sons and a daughter. That there were two clockmakers, and one of them was called Grynberg. And that the spot where the fire brigade building is now used to be occupied by a butcher’s shop in which one could buy veal. That in the bakeries, of which there used to be four, you could buy graham rolls, braided sweet white bread, kaiser rolls, and bagels. One kaiser roll cost five groszes back then. People supposedly brought pots of food to the baker so they could stand next to the oven during the night and keep warm. Idka, on the other hand, had fabrics for sale. The rabbi’s brick house was in Suwalska Street. There was only one other house in that street that was made of brick too. Where the old police station is now with Ms Chodkiewicz’s house on the other side, there used to be two carding workshops in which women made socks, gloves, and sweaters. One of those workshops was owned by a man called Siedlicki.

They said that there was a fire in 1937 in which about ten Jewish houses burnt down. And that only four survived to this day. The first was Dylon’s house, mentioned above. Now the spot is occupied by the Mazury Inn. Two wooden houses in Sejneńska Street. Each of the students had his or her story to tell, and everyone had a story about something else.

Then the group was guided to the Jewish cemetery. They left a few stones, mostly white and rounded. To commemorate, so the dead know that someone visited them and that someone is making an effort.

At the end everyone went to see the exhibit at the school. The school that was a school even before the war and was attended by both Catholics and Jews. The students described what the school looked like, mentioned the names of those who learned and those who taught there.

They also talked about Jewish holidays. What is eaten during Pesach and why you light candles during Hanukkah. What the Jewish calendar is like and what happens to it in leap years.

The students also tried to break the stereotype of a rich and miserly Jew that uses a Catholic child’s blood to make matzo. They explained that it’s all wrong and not true. The guests listened, slightly surprised. At the 2014 School of Dialogue Gala, they received a congratulatory letter from Special Envoy of the Polish Minister of Foreign Affairs for Relations with the Jewish Diaspora of Poland for their wise and competent manner of facing the false accusations regarding Jews.
In a pre-war school chronicle they found an essay written by a student from Wiżajny, Esterka Żytnicka, titled My biography, as well as A Letter to Basia, a school essay of Rywcia Imolińska, which depicts the everyday life of a school student. They read out loud to the tour participants how Esterka describes the day that Marshall Piłsudski died:

“All school students gathered at the school hall after the bell had rung. The principal, E. Popow, announced the tragic news. Then, we left home. I went to the street. I could see people walking with an expression of sadness on their faces with their heads bent towards the ground. A terrible grief filled my heart. I walked into the house and started to cry. Only my mother was in the house. Everyone else had left to the house of prayer to pray for the soul of our beloved leader.”

“Now, I am in the 7th grade”, wrote Esterka at the end of her letter. “The school year is almost finished, next week I will graduate. I do not know what future will bring, but I am very curious about the future.”

The final effect of students’ work is a film depicting their activities and a blog about the Jewish past of Wiżajny.

I am happy to have participated in the project. I learned many things with this project of which I had no idea about, despite the fact that I have lived in this town for many years.

The project and its presentation were successful. Each one of us contributed in a bigger or smaller way to the work. Not only it was a great fun, but also we learned to respect other cultures as we understood them. And accepted them.

This project is very interesting and I think that everyone should learn about it. Already in my childhood I would hear that Jews were stingy and bad people, but this is not the case. I regret that the Jewish cemetery changed its purpose.

I am pleased that we were given this project to work on, because we established relationship with elderly people from this town and we learned about the forgotten events of the history of Wiżajny.

I am very pleased with this project. Now, I have different views about the Jewish people.

School of Dialogue program in Wiżajny was made possible by the support from ARTHUR GOCHIN.