School of Dialogue at School Complex No 2

The kehila in Wodzisław Śląski was dissolved as early as 1924, following a referendum that made Silesia part of Poland. Local Jews, who had lived here since the 18th century (or even as early as the 1730s), migrated to Germany. Jewish settlers coming to Włodzisław stemmed from Silesia, the Netherlands, Germany and Bohemia. They were merchants, artisans, winemaker and brewers. Today, the two surviving Jewish headstones are now located in the regional museum – all others were used to pave roads in the 1950s, whereas the Jewish cemetery became a burial place for Soviet soldiers. Four years ago, a monument commemorating Jews laid to their final rest was unveiled at the location of the former synagogue. The surviving building of the synagogue, rebuilt so many times that only its height resembles that of the original structure, now houses a well-known drugstore chain. The three front arches – symbolic gates of Heaven – are gone.

Workshop participants were not familiar with their town’s history. History textbooks are dominated by the “big” history of Poland and the world. Not much is said about local history, hence the students’ initial lack of interest in this topic. As one female participant explained: “I’ve lived here for so many years and I never cared about the past, but now I just want to expand my knowledge. I want this town to be beautiful and for traces of Jewish presence to stay.” After the workshops that had made a considerable impact, junior high school students began their work on a commemorative project for Wodzisław’s Jews.

They decided to organize a week-long event in their school they called “The Jewish Week”: on Monday, they took elementary school students on a walking tour of Jewish Wodzisław. 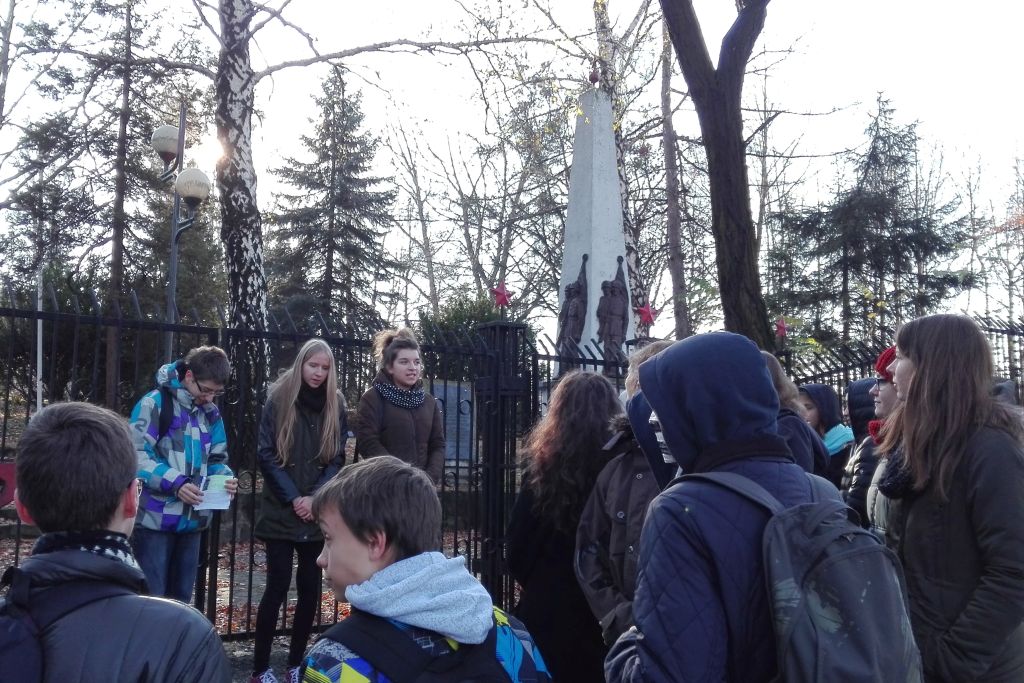 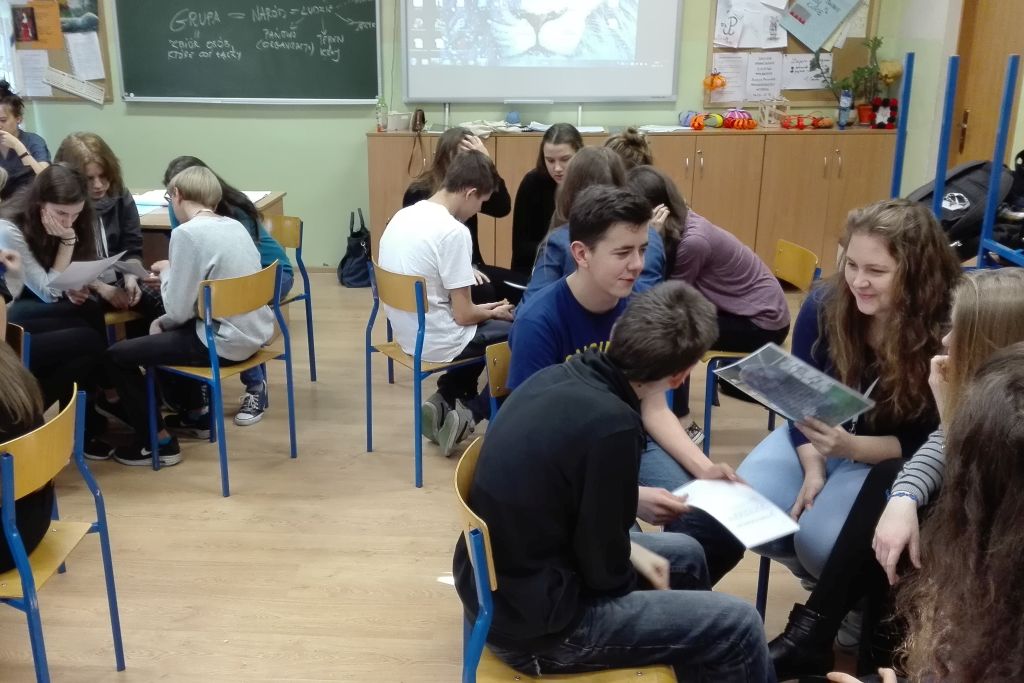 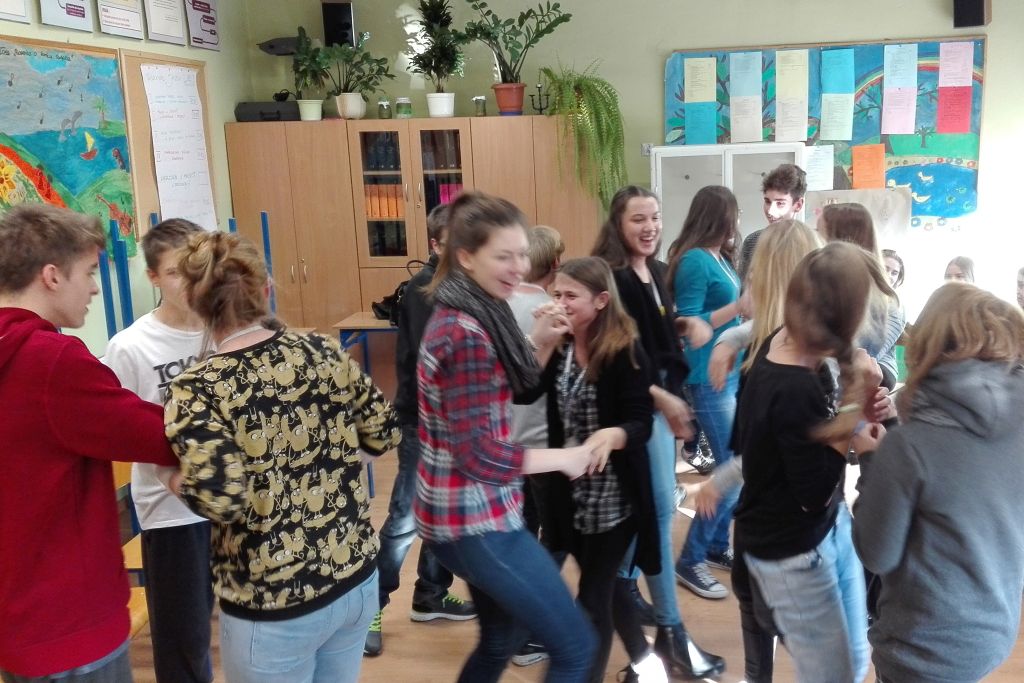 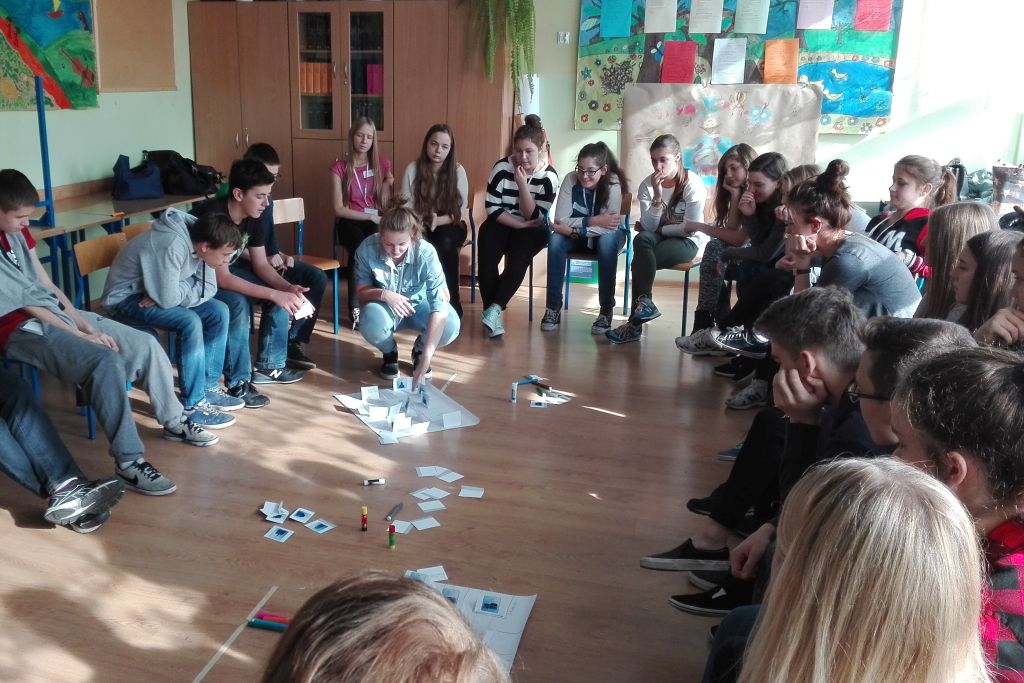 Through puzzles, rhymes and games they tried to pass the knowledge they recently gained on to their younger peers. On Tuesday, the whole school was learning about Jewish holidays and cuisine. Students made hamantashe cookies especially for the occasion. Wednesday was devoted to Hebrew: three girls prepared cards with the Hebrew alphabet and simple phrases, while other students had the opportunity to write their name in Hebrew. Thursday was a dance day. Jewish music filled the school’s auditorium. Finally, on Friday organizers summed up the whole week and held a quiz game. For the duration of the Jewish Week, everyone had a chance to see exhibits lent from the Municipal Museum especially for the occasion. Saturday posed the biggest challenge – this was the day of the walking tour for adult residents of Wodzisław.

Among tour participants were parents, grandparents, teachers and representatives of the local authorities, altogether 40 people.

Each participant received a guidebook with the route of the tour marked out. Students led adults to the market square, synagogue building, site of the former Jewish school for girls and to the former Jewish cemetery. They pointed out Katz family brewery in the market square, Loewe family house with lion reliefs on its façade, and the elegant tenement house of the Juliusburg family which is now used by the District Authority Office. The mayor lit Chanukah candles in front of the former Jewish cemetery, from which only the narrow moss-covered stone stairs survive to the present day. “We imagine how 150 years ago chanukiot would stand in windows of many houses in Wodzisław” said the students. They had a lot of positive feedback after the tour. Ms. Renata admitted “Although I’m a Wodzisław resident, I was not aware that so many places connected to Jews.” One of the students, Bartosz, also added: “I saw many interesting places that I pass almost on a daily basis, but I did not know their history. And now I do know. When I pass them on the way to school now, they seem so much more fascinating.”

I’ve lived here for so many years and I never cared about the past, but now I just want to expand my knowledge. I want this town to be beautiful and for traces of Jewish presence to stay.

I never thought about their culture as I do now. I thought Judaism is a sad religion and now I know it’s exactly the opposite! Jews are the same as us, no one has the right to discriminate them.

While preparing the tour, I learned about my own abilities and skills. (…) I became more aware of my own identity, who I am and how I see the world.