“Zagórów. We lived in a multi-story house at the main square. We ran a shop selling textiles and accessories, which was the source of our income” says Mr. Leon Jedwab in the voice of one of Zagórów students in the film “Something Good at the Rainbow’s End”. The film was shot by students of Zagórów’s School Complex as part of the School of Dialogue program. Mr. Jedwab’s house still stands: with huge white double windows, grey plaster walls and a pharmacy at the ground floor. “On Saturdays we would meet friends and head to the synagogue. Unfortunately, the synagogue was burnt down by Germans during World War II” students read from memoirs of the Holocaust survivor. The synagogue was never rebuilt; now the site is occupied by a bakery. “Christians had their own bathhouse and so did we, it was called a mikveh. And it’s still called this way. A slaughterhouse was next door to the mikveh, chickens and other animals would be killed there.” If you look carefully, you can still recognize the site of the former mikveh – fragments of the stone well still stand, there’s even a suka (or shtibel), but no one goes there anymore, the building is now in private hands. And anyway, almost no-one knows about the place. “We also had a cemetery. It was destroyed by the Nazis. Only two headstones remain, because the Nazis couldn’t move them, they were too heavy”.

The two heavy matzevot still stand at the cemetery. More recently, a plaque was placed there as well. It reads: “Jewish cemetery. Area protected by law. Respect the site of the final rest.” “I had a happy childhood and a loving family…” the students read on. Mr. Jedwab’s memoirs guide them through prewar history and years of Nazi occupation.

\School of Dialogue workshops acquainted students not only with their town’s history, but also with Jewish culture and religion. Jews inhabited Zagórów since the 19th century. In 1939, the town had 630 Jewish residents. Almost all of them died in World War II, murdered in the forests around Konin. In the course of the workshops students were most interested in Jewish culture and traditions. They also found comparisons between Jewish and Christian religion fascinating. For the final session, Forum’s educators invited an activist from Konin, Mr. Damian Kruczkowski, who told students about the opportunities that social activism provides. In the course of independent project work, workshop participants were most moved by the story of one of the few Zagórów Holocaust survivors, Mr. Leon Jedwab. They decided to shoot a film about his life story, basing their screenplay on an interview with the survivor. 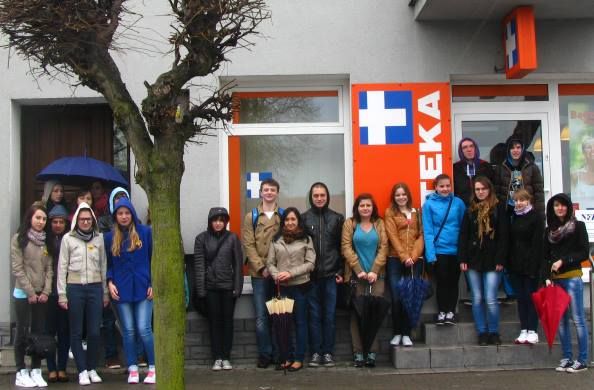 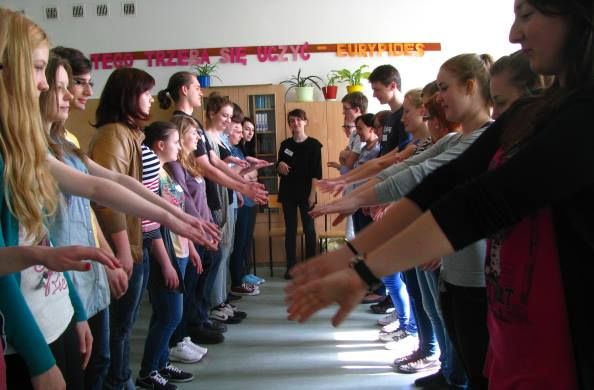 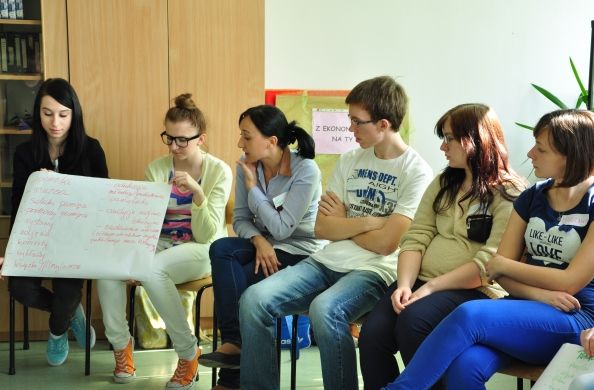 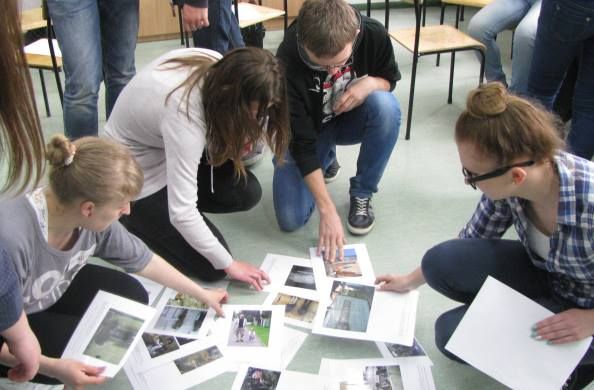 They searched Leon Jedwab’s website for additional information. Students were assisted with film editing work by their computer lab teacher, Mr. Radosław Napierała. The audio was recorded with the assistance of a local reporter – Ms. Nadia Gierszewska from Twoja Słupca Radio.

The film’s premiere was attended by other students and teachers from the school, who were also invited to participate in a walking tour that led through the town’s Jewish sites such as the mikveh, slaughterhouse, synagogue, Jewish bakery, yeshiva as well as the Jedwab family house. During the tour, workshop participants handed out daffodils, in reference to the campaign organized by Polin Museum of the History of Polish Jews to commemorate the anniversary of the outbreak of the Warsaw Ghetto Uprising.

But the film was not screened just once. In September, students attended a methodology conference for history teachers held in Konin, where they showed their film to local historians.

Another screening was organized in the local arena and was followed by a presentation by dr Jolanta Kmieć about preserving the memory of local history. In December, technical school student Krzysztof Wiatrowski helped workshop participants create a map with all the sites connected to the life, culture and religion of Zagórów Jews marked out. Around that time, a final walking tour for local junior high school students was organized. The film “Something Good at the End of the Rainbow. Life story of Leon Jedwab from Zagórów” is available online, also with English subtitles, prepared by English teacher Ms. Ilona Król.  The movie was also sent to the Jewish Holocaust Center in Melbourne and interested people living in Israel.

Participation in this project awoke in me tolerance that I never knew I had. I am happy to have been given the opportunity to deepen my knowledge and change my character.

By delving into Jewish culture I learned about my hometown from a different perspective.

School of Dialogue allows us to expand our horizons.

I am very happy with these meetings and I am glad that I met interesting people who are passionate about history.