They ordered 1.5m x 4m size plasterboards to build a mural, they baked 300 cookies in the shape of the Star of David in the school’s kitchen, they cooperated with the local museum. These are only a few examples of the actions that the students from Junior High in Zdunska Wola undertook in the framework of the School of Dialogue program. During the workshops led by Forum’s educators, Beata Godlewska and Szymon Gotowski, the students showed a lot of interest in the traditions of the Jewish holidays. They were curious to know more about Rosh Hashanah, Jom Kipur, Purim, Pesach and Chanukah. The second workshop was mainly devoted to preparations for the project commemorating the Jewish community of Zduńska Wola. But how did the everyday life of the Jews from Zdunska Wola look like?

From 1825 the Jewish residents had lived in Zduńska Wola on then Stefana and Ogrodowa Streets, as well as at the Market Square. The Jewish community was established in Zduńska Wola in 1828, and included a synagogue located in the so-called House under Three Stars, a house of prayer, a mikvah, a poultry slaughterhouse, a house where the school was located, a cemetery, a pre-burial house and the area around the house of prayer.

In the second half of the 19th  century, the Jews were numerous among the craftsmen and factory owners. In total, Jews made up 36% of the town’s residents. Today, the traces of their presence can be found mainly in the town’s center – the Jewish heritage includes the pre-war buildings around the Market Square and Dąbrowskiego, Fabryczna, Kościelna and Łaska Streets, as well as the Jewish cemetery – fenced and tidy with more than thousands of well-preserved matzevah. Mikvah, cheder and Jewish community base were located in a building at Sieradzka Street. Behind that building a synagogue used to stand. It was pulled down during the war. Today, only the original metal entrance gate still stands at that place. The Town History Museum keeps a huge archive and a collection of photographs depicting not only the pre-war everyday social, cultural and family life, but also the photographs from the occupation, of the ghetto and its liquidation. In Zduńska Wola, there are still historical buildings of industrial and postindustrial architecture, which belonged to the local Jews. There is also a brewery, established in the 19 century, which nowadays produces kosher beer, mainly for export. 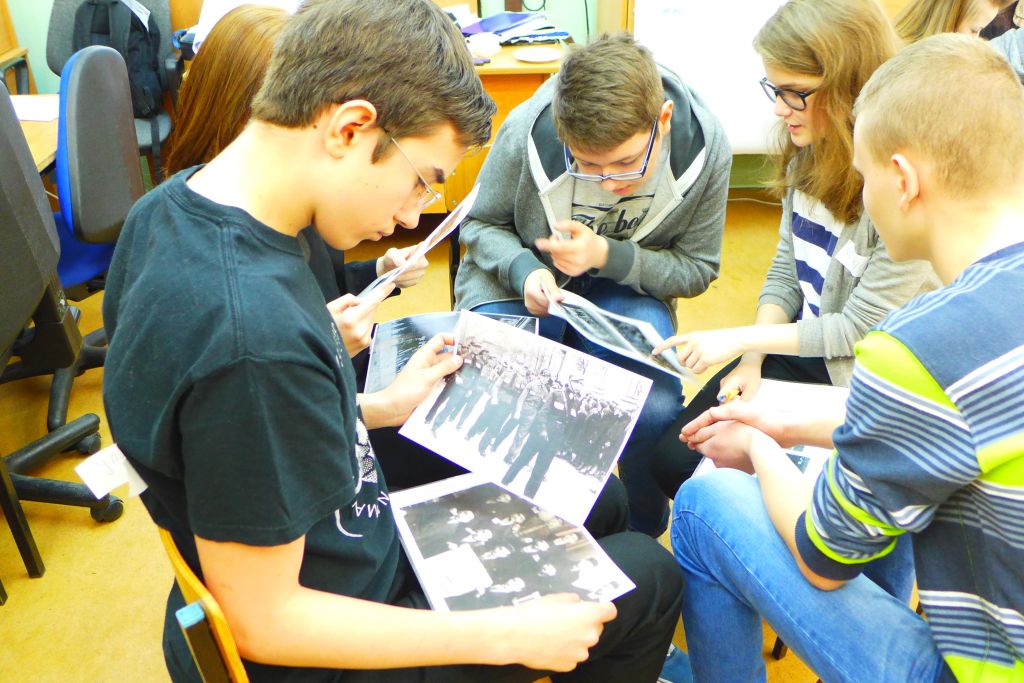 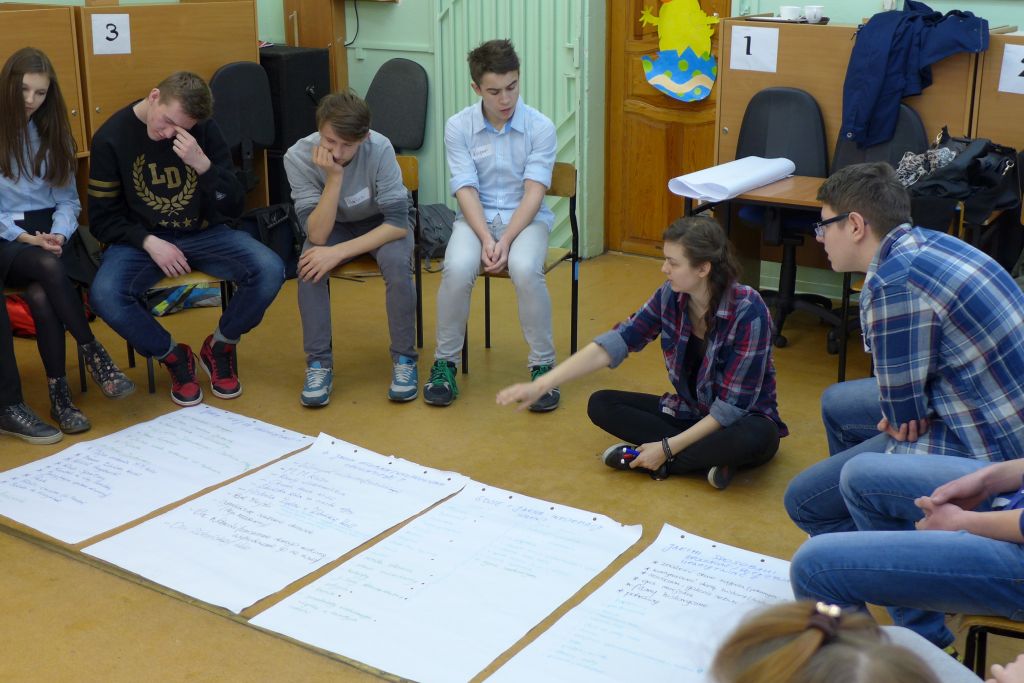 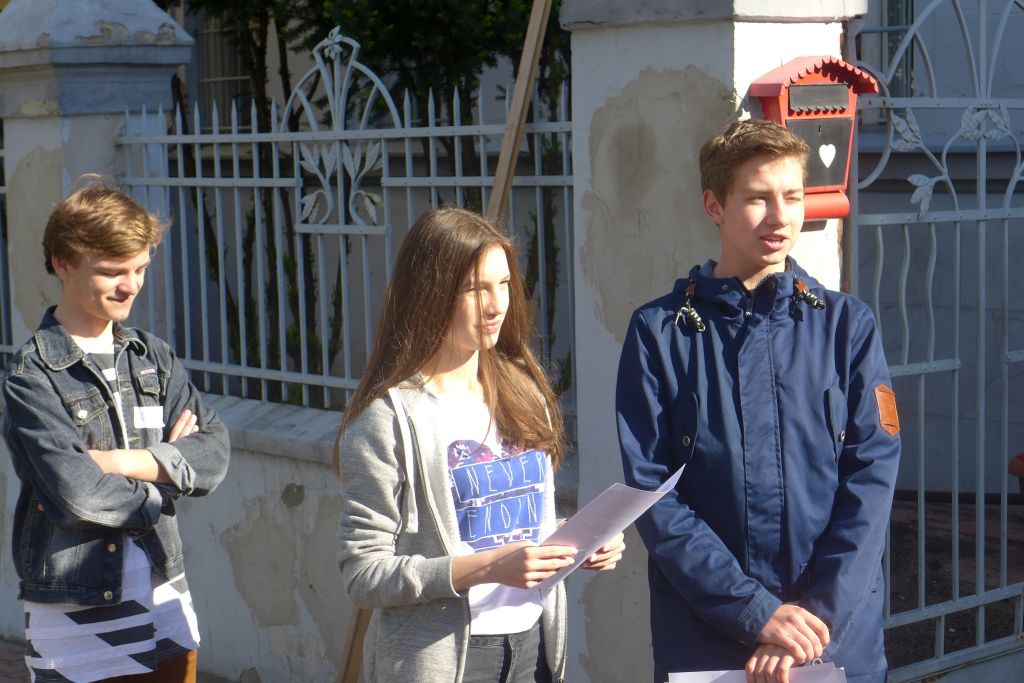 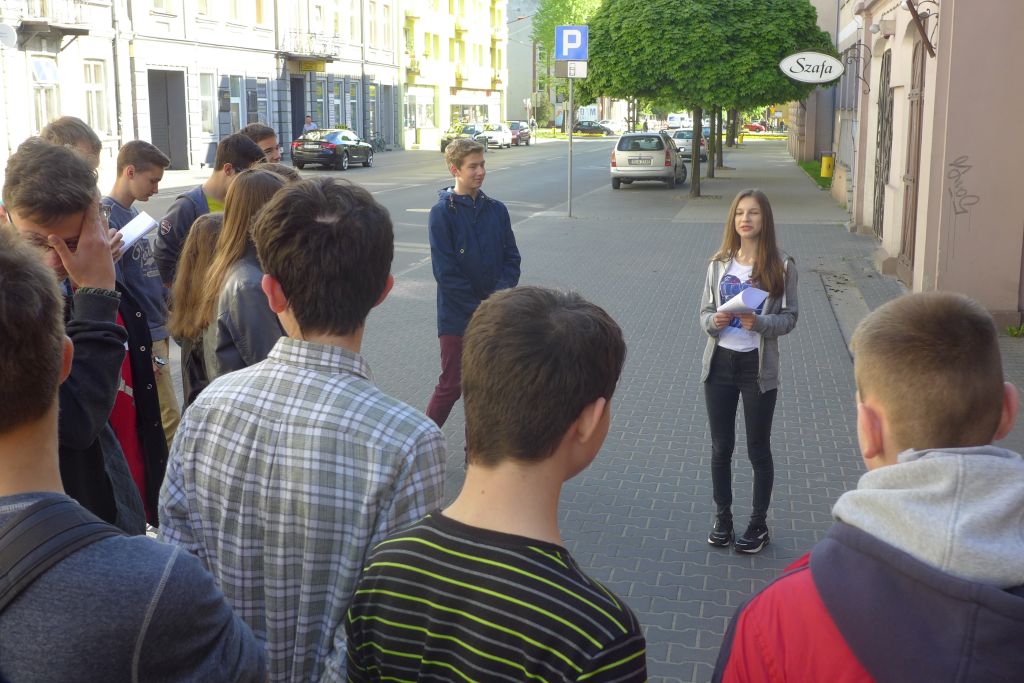 The students decided to include their project into the Long Night of the Museums events organized in Zduńska Wola. They came up with the idea to recreate the pre-war photographs of the town – they wanted to invite town’s residents to be photographed in a scenery taken from the original photographs. Another idea they had was to create a mural with the town’s name in Hebrew. They also prepared snacks in the shape of the Star of David. A few weeks before the walking tour, the students met with Mr. Tomasz Polkowski – director of the Town History Museum, and his wife, Mrs. Kamila Klauzińska – local historian and Hebraist. Mr. Polkowski showed them unpublished photos from the museum archives, and provided them with a place to organize their event on the Night of the Museums. From Mrs. Klauzińska the students learned the basics of the Hebrew language. It was with her help that they managed to create a template for their mural. Short before the walking tour, the group of students responsible for promotion made posters and leaflets to promote the event. A day before the walking tour, the students took over the school’s cafeteria and managed to prepare 300 cookies in the shape of Star of David which took them about 4 hours. The first walking tour started at 3 p.m. with around 10 participants. The second one at 6 p.m. gathered around 25 people.

Finally the long awaited day, May 16, arrived. On that they the students organized the walking tour and created the mural – all in the framework of the Long Night of the Museum in Zduńska Wola.

The tour included the place where the synagogue and mikvah used to stand, and the Market Square. They continued the tour by walking along the pre-war buildings to arrive at the ghetto’s gate. After the ghetto’s liquidation, it served as the execution site.

The possibility to write down one’s name in Hebrew turned out to be the biggest attraction of the evening. Many residents of Zduńska Wola participated in the project of painting the mural. The name Zduńska Wola in Hebrew was painted on a wallboard with the use of a template and spray. The town residents voluntarily took part in the initiative to bring old photographs back to life. They gladly posed to be photographed at the given place in order to recreate the original scenery. In total, more than 350 people have participated.

Close cooperation of the high school students with the Town History Museum of Zduńska Wola had its continuation after the event. The Museum Director Mr. Tomasz Polkowski invited the students to become volunteers and help to enlarge museum’s collection. Everyone was very impressed by all the efforts the students put into their project. For the young boys and girls it was a true adventure. “During the four workshops I learned more than in the entire school year”, said one of the workshop participant.

In the course of the four workshops I learned more than during the whole year at school.

Because I took part in this program, I decided to get involved in more initiatives in my home town because I like to work on a voluntary basis. The educators showed us that if we want to change something, we must act and not complain, and that we are creative and we have a lot of potential. The future is now and we have an impact on it through what we do.

I learned so much about the Jewish culture. I had no idea that Jewish people have so many holidays and their culture is so rich. I regret that in my town there are not many Jews or foreigners who could enrich local life. I know there were many before the war. I understood that life in a multicultural, multinational town would have been really great!