The biggest wave of Jewish settlers came to Żyrardów in 1890s. New residents came from nearby towns of Wiskitki, Mszczonów and Grodzisk Mazowiecki. They came from all around and their numbers grew each year, so that ultimately a Jewish district was created in Ruda, along Fabryczna, Bagno, Kolejowa and Przejazd streets and the intersecting streets of Wąska, Targowa, Szeroka as well as the avenues: Dittricha and Hiellego.

The Jewish cemetery was established already in 1850s. The community created a beit midrash, and then erected a nice red-brick building of the synagogue. Most of the local Jews were merchants and craftsmen, a few were industrialists. In 1921, the Jewish population of Żyrardów amounted to 2541 people. Both non-religious and orthodox, left-wing and right-wing. Some were Hassidic, mostly followers of the Ger dynasty. Aguda existed and so did Mizrachi, There were general Zionists supported by the local middle class. However, the most influential party was the right wing of Poale Zion with its young charismatic leadership.

In frame of the School of Dialogue program, a group of students from different high school grades organized a walking tour of Jewish Żyrardów and workshops about Jewish history and culture for other students from their school. The students proved to be very creative and motivated; they worked in small groups that focused on different aspects of the project. What did the prewar Jewish section of the town look like?

How did local Jews differ among themselves? Who was who, what did they do, were they assimilated or not? How were Yom Kippur and Chanukah celebrated? Where did Jews pray and why? And to whom? Did they engage in charity work? For whom and for what, and what does that mean? Where was the Jewish cemetery and what does it look like now?

The walking tour followed the footsteps of Josele  Jakubowicz , a Holocaust survivor who revisited his family town in 1960, witnessing the final demolition of the Żyrardów synagogue.  The students started their tour at the train station just as Josele did almost 50 years ago. . It was also the site from which Jews would be deported to the Warsaw ghetto during the war. Tour organizers explained what the term “ghetto” means and where it was physically located in Żyrardów. It was created on October 1, 1940 between Fabryczna, Familijna and Wiskicka streets (contemporary names: Okrzei, Mireckiego and 1 Maja). Around 900 Jews were resettled there from Sochaczew, and a further few hundred from Aleksandrów Łódzki and Mszczonów – altogether ca. 5 thousand people. All of them were deported to the Warsaw Ghetto between 1 and 9 of February, 1941.. After the war, a tiny group of Jews came back to Żyrardów. The house at 14 Fabryczna Street became the address of the Jewish Committee. Some of the Jewish children were placed in the local orphanage. In all likelihood, most of them left town. 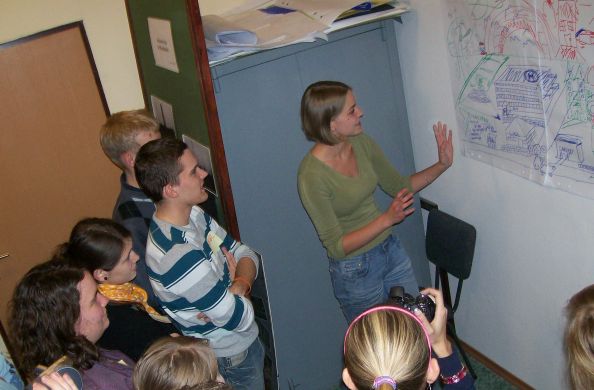 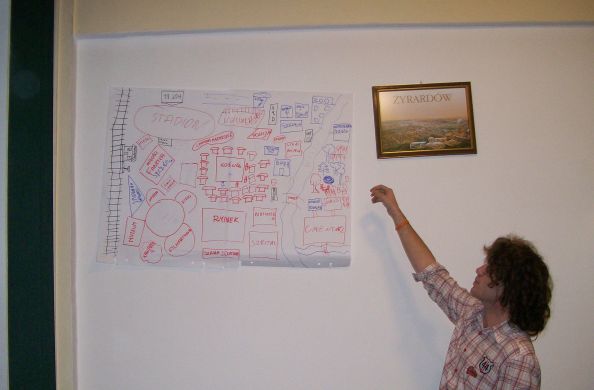 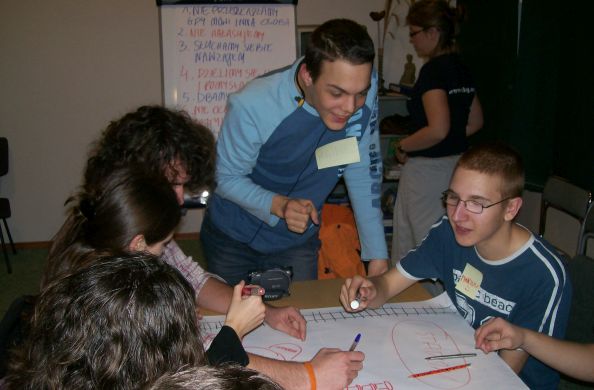 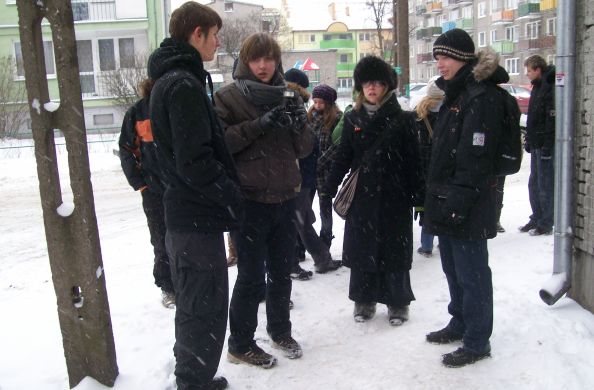 On a street map located next to the train station, the students pointed to the boundaries of the Jewish neighborhood. They talked about the beginning of the Jewish settlement in Żyrardów. They explained what matrilineal and patrilineal inheritance is and why were mixed marriages not tolerated, giving the example of the tragic love story of Jankiel Dorembus.
At 11 Sienkiewicza Street they explained how an assimilated Jew is different from an Orthodox one, as you could find both in Żyrardów.

A the corner of 16 stycznia and Dekerta Streets they tried to explain what Jewish residential homes looked like, where they would be mostly located and what a mezuzah is. They said that if you look hard enough, there are still some that can be spotted in Żyrardów – you just need to look carefully and check with your hand. They also described Sukkot, the holiday of the huts and explained why those huts are being build.

At 1 Maja Street they explained how local Jews made their living and what kind of jobs they had. Why none of them worked in the factories and – picking up on the topic – what Shabbat is. What are kosher slaughterhouses, where were the most popular Jewish shops and what would you shop for in them?

At Szulmana Street students gave a detailed account about the location of the synagogue, provided Polish synonyms for the word synagogue and explained when was the permit for the synagogue’s construction given and by whom; why the building is no longer there, why it was destroyed; why synagogue windows always face the east and what is the name of the part intended for women; and if anyone knows what tallit and mikveh are, raise your hand!

A stop on Mireckiego Street to explain about the cheder and what the first public Jewish school looked like and how it functioned. And about Zalman Klepfisz’s reformed school, who gave his heart and soul to this modern education institution. About pastimes and what local Jews would do when they were not working.

Tour participants had red noses from the cold, moved around when standing and breathed to show others warm steam coming out of their mouths. There was no choice but to head back to the school and finish the tour there. Participants used paper and boards to learn about the Aron Ha-Kodesh, the name for the curtain that covers Torah scrolls, the menorah and that higher part in the middle of a synagogue.

And then about those Jewish tombstones, the matzevot. What do their symbols, like broken candle or interlocked hands mean; and that an ohel is a tzaddik’s grave. And who is this tzaddik and why don’t Jews leave flowers on the graves but instead use stones. Workshops prepared by the students turned out to be as interesting as the tour.