To be honest, it is hard to provide a single answer to the question how the idea of getting involved in restoring the memory and history of Polish Jews was born in my mind. It is easier to recall the circumstances when this happened. So, here is the story… In 2003, I was ran a project with my high school students entitled “Multiculturalism as Wealth”, as Żyrardów, the town I live in, has a rich past, being a unique industrial settlement with multicultural roots. After visiting the museum and listening to stories about the beginnings of our city’s existence, we decided to shoot an amateur film, in which we wanted to focus on the many communities that shaped our town. Out of the themes we came up with, one focused on the most “absent” history in the minds of the people of Żyrardów – that of the Jewish community. A certain curiosity was born – how did it happen that Jews are now gone, and the traces of their lives are either forgotten or not very eagerly remembered? This motivated me to organize further projects. It turned out that it was not so difficult to recreate the history of the minorities that once used to live here; however, the Jewish topic was constantly getting lost in the recesses of the mind of the people I talked to.

My impression is that my work started the process of bringing back the neglected memory and this turned out to be an important creative challenge. And I love challenges. However, the biggest motivator to awaken this memory was my meeting in 2007 with members of the Children of the Holocaust association and the wave of emotions sparked by their stories. Soon afterwards, I began to intensively read about the Holocaust, memories of Jewish life in Poland before the war, as well as in our town Żyrardów, and feelings of anger, shame and fascination overcame me. I was angry because up until that point, I was deprived of a deeper knowledge – that is, awareness – of the fact that the Jewish neighbors of my grandparents and parents fell victim to an unprecedented atrocity. My education from the times of communist Poland was full of white spots and had done its job!

I felt ashamed because I never noticed anything on my own, not even the abandoned Jewish cemeteries, empty spaces where Jewish houses used to stand,  even though I myself grew up in the atmosphere of constant mourning over my family’s exile from eastern territories of Poland lost as a result of World War II.  I started looking for material traces of post-Jewish life in Żyrardów and in my hometown of Legnica. I started recalling my Jewish neighbors, who had emigrated to Israel in the 1960s. I finally learnt the story of my grandfather who hid Marysia Surdej, a Jewish girl that was his best friend’s fiancée, in a well; this is how my fascination with individual stories of Jews persecuted during World War II, as well as with those few people who helped them survive, grew. My fascination strengthened during my study tour to Israel, to Yad Vashem. This trip was not only the effect of a well-planned education; rather, it resulted from personal contacts with people – witnesses of history or their descendants. I participate in a number of initiatives that aim to commemorate the Jewish history of Żyrardów, and the Holocaust. I feel that it is very important to foster attitudes of responsibility for the material legacy of the Jews among young people in light of symbolic and literal absence of Jews in Poland. I give young people and all interested persons opportunities to establish contacts with contemporary Jews through Polish-Israeli meetings and in the course of visits of descendants Żyrardów’s Jews. In one of our local high schools, as part of my specialization, using literature and other testimonies, and employing a number of academic and artistic contexts, during Polish language classes I teach about the thousand years of Jewish presence in Poland and about the Holocaust. Apart from traditional forms of education, I also value experiments, experiential learning, school community projects and campaigns, as well as engaging young people in local events.

As a human being and a teacher, I feel responsible for sustaining the memory of one thousand years of Jewish life in Poland and Jews’ tragic fate during World War II.  The aim of my activism is to initiate opportunities to experience mourning after the Holocaust; to this day, not everyone has drawn the reasons for and consequences of this mourning. I believe that reflection on the Holocaust can be also used in many important educational and world-view discussions, with reference to both post-war and current politics, to shape morally responsible human beings, who are sensitive to the suffering resulting from humiliation of human dignity. My activism is an attempt to counteract a peculiar amnesia of the witnesses of the past and the keepers of their memory. There has not been enough research on overcoming this trauma. I create circumstances which are favorable for breaking many negative stereotypes about Jews. I encourage learning about individual stories of Jewish life and the Holocaust, paying attention to exposing the personal perspective. I want to create emphatic attitudes in my students towards individual experience of the victims, to make them realize the dangers resulting from indifference or prejudice that have their roots in negative stereotypes. I stress the hardships, but also the wealth of positive experiences coming from tolerant co-existence and dialoguing otherness. I focus on lessons dedicated to explaining the mechanisms connected to the Holocaust and its circumstances, by showing both its universal and unique dimensions. I feel that to foster attitudes among young people it is especially important to have them participate in actions based on respect for the values exposed in teaching about the Holocaust: human dignity, individual responsibility, freedom and the obligation to remember. My actions also aim to commemorate the few Righteous Among Nations and their heroic decisions, shown as paragon examples of humanity and responsible citizenship.

With each consecutive year, I observe positive changes in the behaviors and views of my students. I have many examples of them becoming sensitive to prejudice and discrimination resulting from giving in to stereotypes. I see many examples of students who became interested in Jewish matters and individually search for information about the millennium of Jewish presence in Poland, the Holocaust, as well as its consequences. We inherit or are inculcated with prejudice in times unfavorable to tolerance and dialogue; however, combating prejudice with education always makes sense and brings positive results. This is the little or as much we can do. Many bad things result from ignorance, mental laziness; my activism tries to counteract both and although sometimes I lose hope in the sense of it, this feeling is fleeting… because there is always an impulse to try over and over with each new year of students with the same enthusiasm. I strongly believe that important things have to be difficult and few people would decide to get involved on their own. With the passing years, I get more support from my former students, who are now in college or already working, yet participate in my new initiatives. Sometimes I hear words of gratitude addressed to my students and to me, coming from somewhere in the world, for creating a database about the local Jewish cemetery and for our map allowing people to locate particular matzevot. And once more, I feel that we are doing something important for the next generations of Jews whose ancestors were born here. On another occasion, our students heard from a Jewish lady from Australia, who visited our town as part of her trip to Poland – the homeland of her parents and grandparents. She said that what these young people do is an argument against the stereotypes saying Polish people are prejudiced against Jews, that this can change a lot in the attitude that the Jewish survivors or immigrants from Poland have towards us as a nation. At that moment we felt very proud that we are doing such important things. 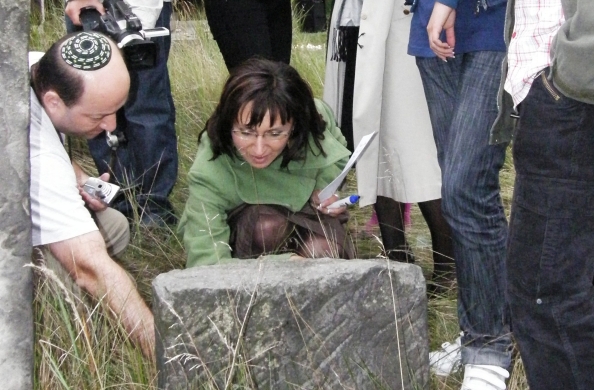 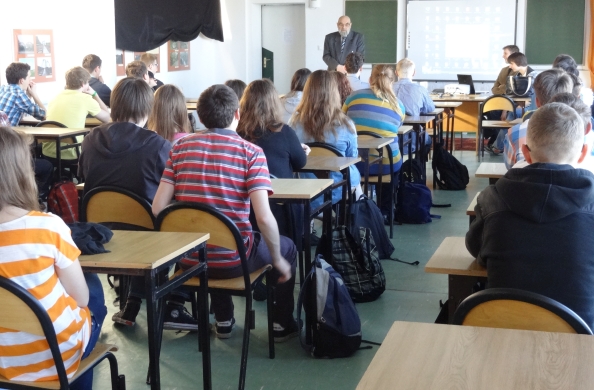 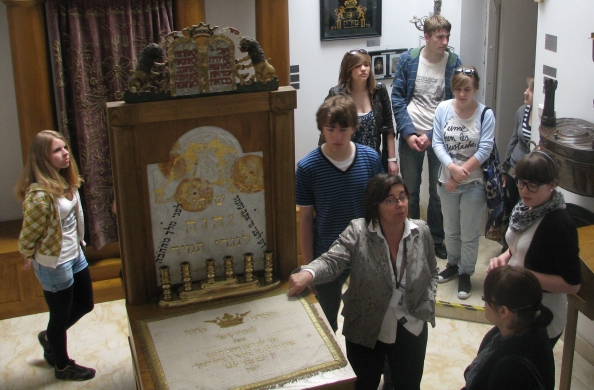 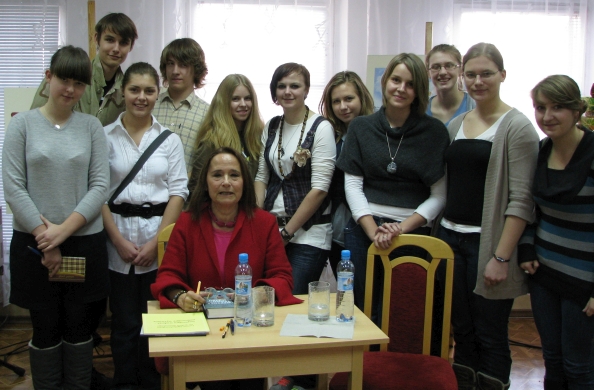 We face different reactions to our involvement in commemorating the Holocaust and reminding people of the local Jewish history; people still do not know enough, yet they know more than they did just a few years ago, so maybe, at the end of the day, this all makes sense. It is noteworthy in this context that a Jewish Cultural Association was established in our town in 2016, while the local museum organized two exhibitions devoted to the memory of the local Jewish community; one of the exhibitions was prepared by my former student. Two schools in nearby Mszczonów and Wiskitki participated in the School for Dialogue and in the Polin Museum projects, and a few years ago there a new book about local Jewish neighbors was published. Young educators prepared “A Walk through Jewish Żyrardów” for “Museum on Wheels” program. We were also contacted by descendants of Jews that had once lived in Żyrardów who came to Poland to create their genealogical trees. Even local county authorities appreciated the value of our work and honored me with a diploma recognizing my services for protection of historical heritage. I embarked on my mission in completely different, much less promising settings, so things are definitely not that bad. The Trees of Friendship we planted in 2008 during the first Polish-Israeli meeting by the cemetery gate are growing bigger and bigger… Four of the Polish-Jewish meetings held in my high school as part of the ORE and Yad Vashem program “History and Culture of Two Nations” were accompanied by a project called “Challenges in the Face of Otherness. Against Stereotypes” (2009), the “Wishing Tree” (2012) happening and the “Bridge of Understanding” (2012).

These are different forms of [also active] education in the area of Jewish history and culture, but also anti-discriminatory workshops and barrier-free communication. Each time we would do something within the space of the town, commemorating a given aspect from Jewish life and/or Holocaust in Żyrardów. We promote our commemorative actions not only locally, but also through national programs. For example, urban game “Forgotten Traces – Who Were the Saved Ones”, installations “Righteous Pose a Challenge to Us” and “Call for Commemoration” were shared in the “Young Citizen” program run by Center for Civic Education (CEO) non-profit. The project of cataloguing matzevot at the Jewish cemetery in Żyrardów – “To the Benefit of the Dialogue of Cultures”  (2010-2012), which resulted in the creation of a database and a map of the site, was presented in a program ran by the Foundation for Preservation of Jewish Heritage (FODŻ), entitled “To bring memory back”.  Teenage leaders of these undertakings successfully participated in contests promoting knowledge and culture about Polish Jews; among others, they participated in the contest organized by the Art Academy in Bielsko-Biała and the Office of the President of the Republic of Poland: “Cultural Heritage of Jews in my Town. Diversity, Memory, Future” (2010); in a contest organized by the Mazovian Self-Government Teacher Training Center (MSCDN): “Citizens’ Space in Multicultural Republic of Poland and Republic of Lithuania” (2010), and in the 9th edition of the contest entitled “History and Culture of Polish Jews” in academic year 2009/2010.